I didn’t have much to share about the family this week, which is just crazy. This was Spring Break and Rob and Drew were gone much of the week, I was thinking back to the Spring Breaks of the past. I scrolled through the pictures and found a few and decided to make this little collage. 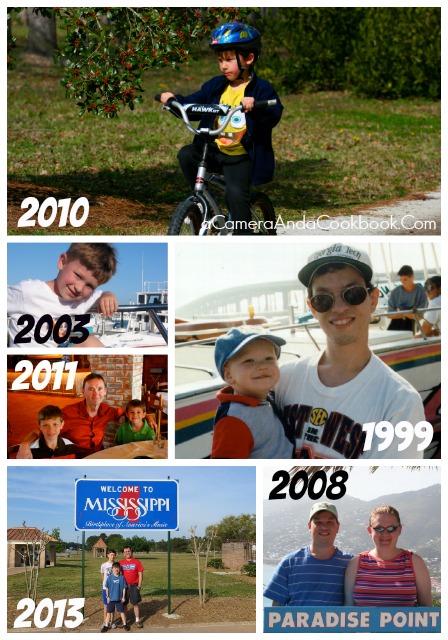 1999 – Here’s Rob and Drew (14 months) somewhere in Florida. We were with Rob’s Gramma and Granpa staying in a condo they had rented while they looked for places to live. They were getting ready to move from Atlanta to Florida. In this pic, we were about to board a speed boat, which was crazy fun.

2003 – Here’s Drew (5 years old) and again we were in Florida, but this time we were in Pensacola. We were about to leave on a boat for an evening cruise to watch for dolphins. We saw a lot of dolphins.

2008 – Rob and I were in St. Thomas on an excursion during our cruise on the Carnival Triumph.

2010 – Alex (6 years old) riding his bike. He turned 6 just a couple weeks before this picture and right after that he finally decided he was ready to ride a bike without training wheels! Here he’s pictured at one of our parks in town that really caters to bicycling.

2011 – Drew, Alex, and my Dad in Texas at Joe T. Garcia’s the night before attending my Grandmother’s funeral.

2013 – Here’s Drew, Alex, and Rob at a rest stop after crossing over into Mississippi on our way to Biloxi.