I’m honestly not even sure where to start with this garden post, since I haven’t done a great job of documenting it here all along. I know I’ve mentioned it a lot the last few months.

To start off I’d like to say that this garden would not have been a thing if it weren’t for Jess at Roots & Refuge Farm and her Youtube channel. I started watching her about a year and half ago, I think it was when another Youtuber/Blogger friend, Constance from Cosmopolitan Cornbread mentioned her.

Jess and her hubby who she lovingly calls ‘Sweet Miah’ have such a joy about them. Jess’s love of her garden, and homestead or farm is just contagious. She makes you want to try gardening all the while teaching you so much about the garden. Her love of heirloom seeds is also quite contagious. So in January, I decided I was going to try some container gardening. I watched several of her videos where she talked about all her favorite varieties of seeds. Now Jess loves eating and growing tomatoes and while I’m not a huge tomato fan she had me wanting to grow ALL the varieties of tomatoes! So here I am growing 5 different kinds of tomatoes and actually enjoying the ones I’ve been able to harvest so far. Yeah, so I watch several of Jess’s videos each day; I watch her newest video that she posts each day along with a few of her older videos as she’s been posting for several years.

In February I ordered seeds (all heirloom, I believe) from Baker Creek and MIgardener. Baker Creek has lots of seeds you can’t really find anywhere else and I like MIgardener because they have a great Youtube channel, where I’ve learned lots, as well as the fact most of their seeds are 99¢ a packet.

The reason I wanted to start from seed and not just buy them at the store is because you can’t find all the heirloom varieties at the store. I was also up for the challenge.

For this post, I’m going to kind of show some overall progression pictures and talk a little about the garden in general. I think I’m going to write a few more posts about more specifics. 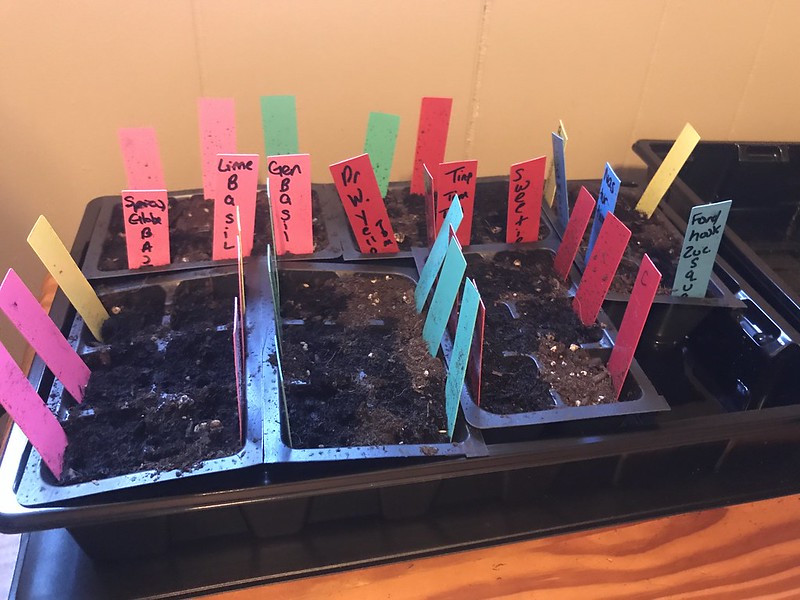 March 20 Here’s all the baby sprouts not quite a month after I planted them. 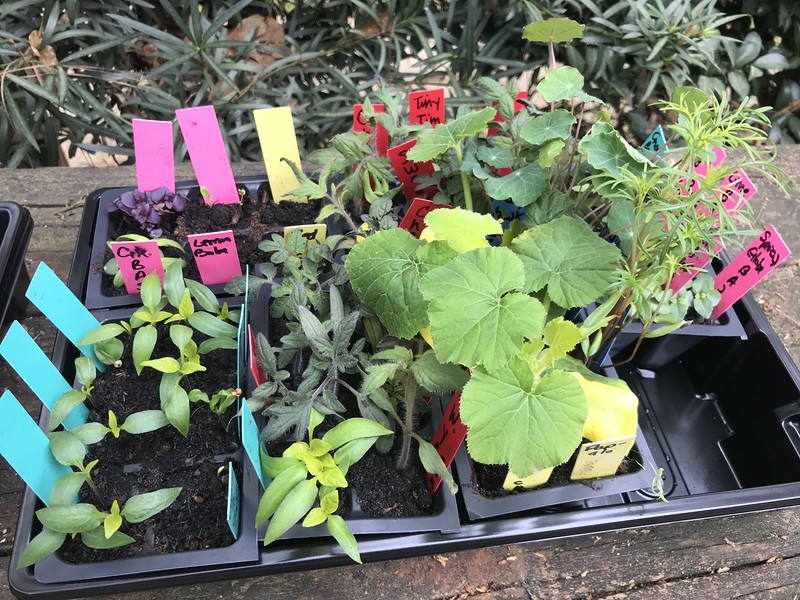 I had the seedlings outside because most of my seeds actually germinated and I couldn’t bring myself to thin them out by cutting some. You should only end up with 1 plant per cube and most of mine had multiple seedlings in each cube. So instead I replanted them into Solo cups that had holes drilled on the bottom. 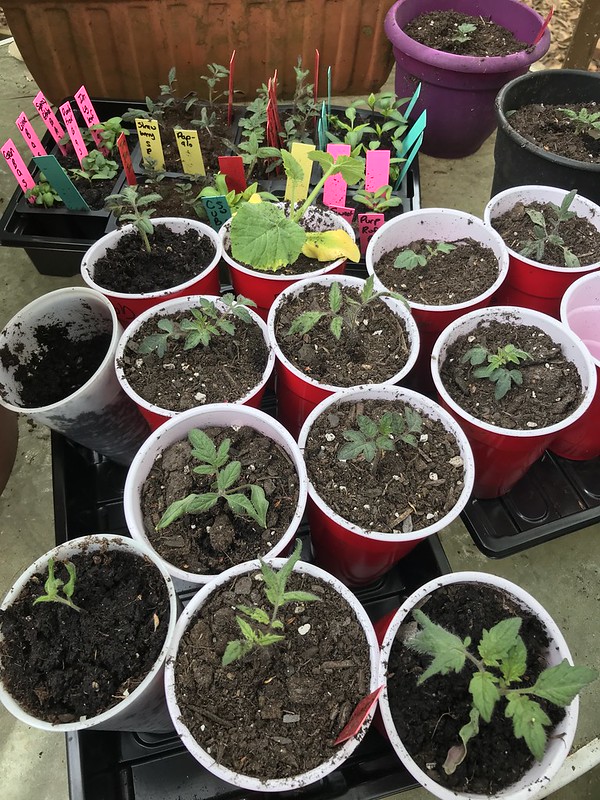 April 27 Here’s a good picture of the grow bags, I planted most everything in. They are from 247 Garden. I can say they have worked well and are holding up quite nicely. Great for the price! 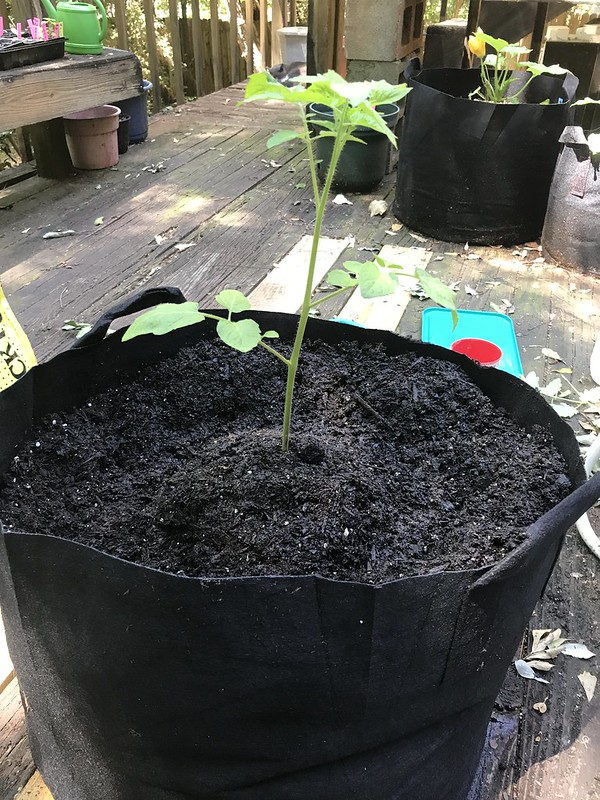 My garden is a Potager style, which means I grow vegetables, herbs, and flowers. Flowers add beauty and help bring in pollinators. These are Cosmos from a free packet that came on some granola bars. 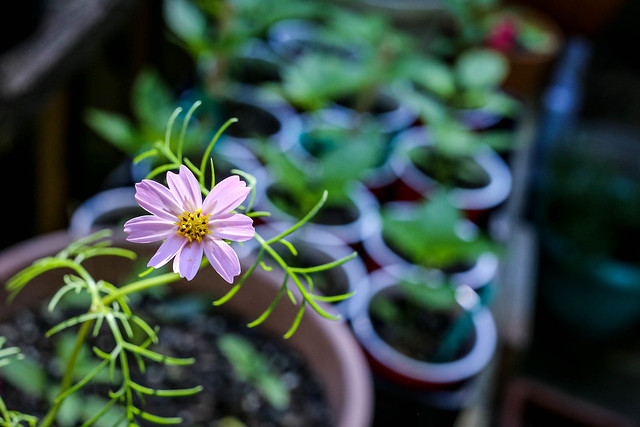 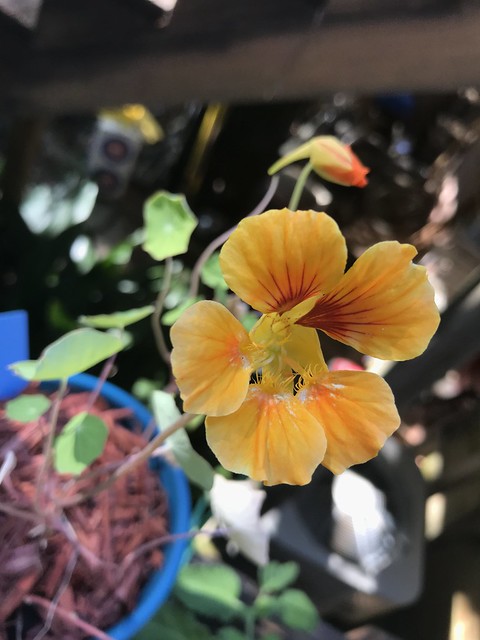 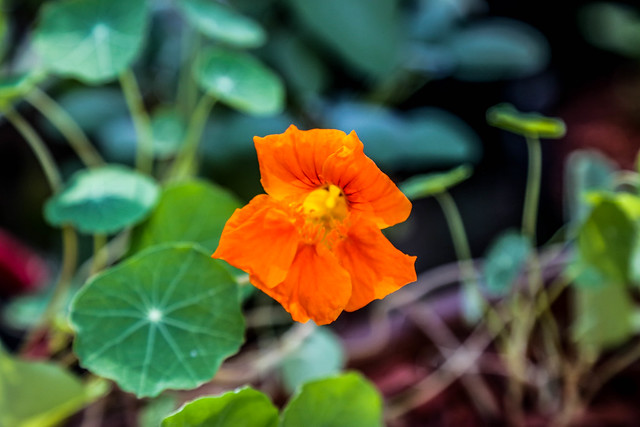 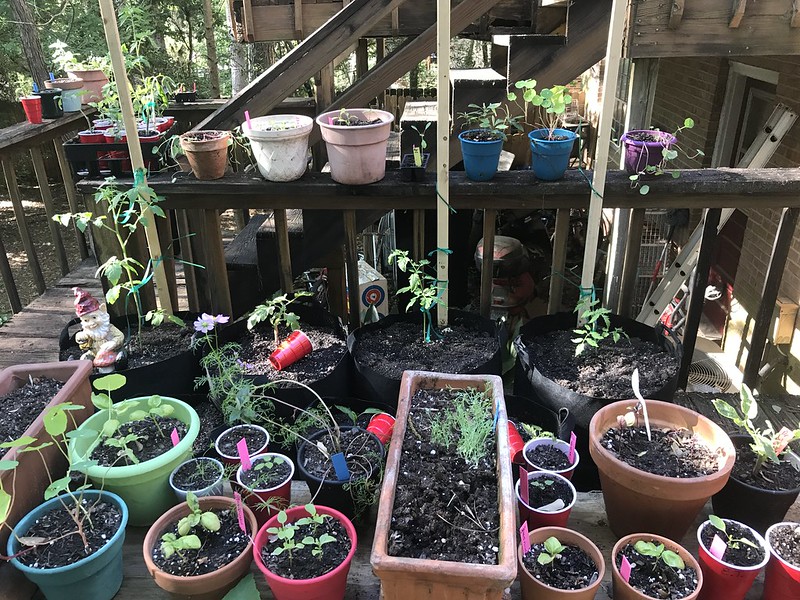 Found this little due in a stack of pots. 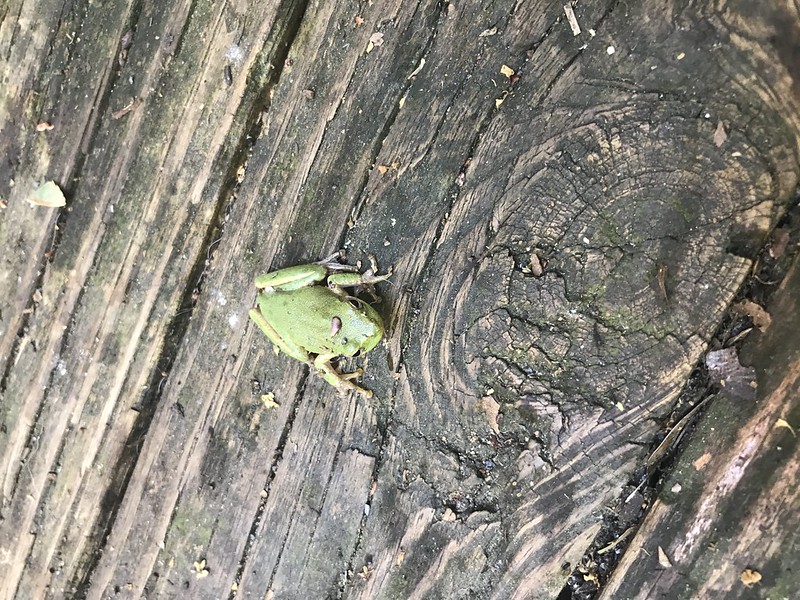 May 14 I planted seeds for different types of lettuces and spinach in a bag of potting soil. These were planted end of March. 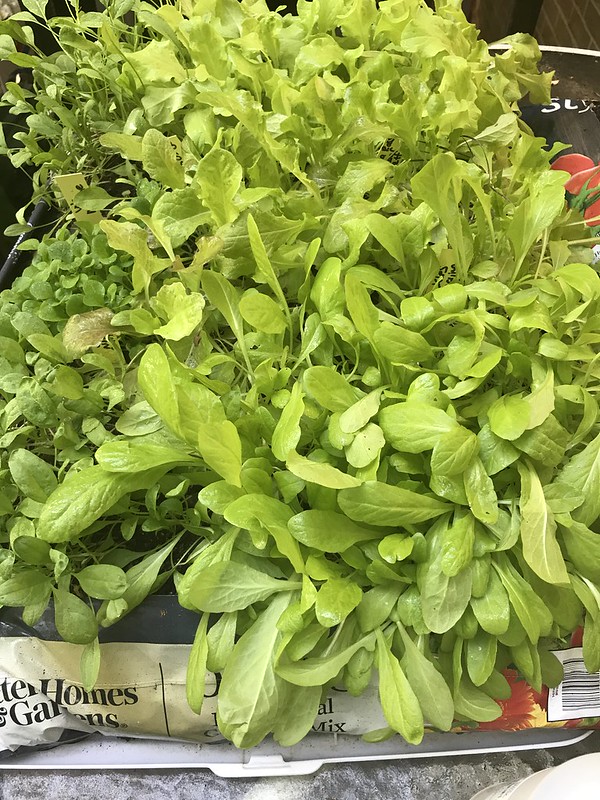 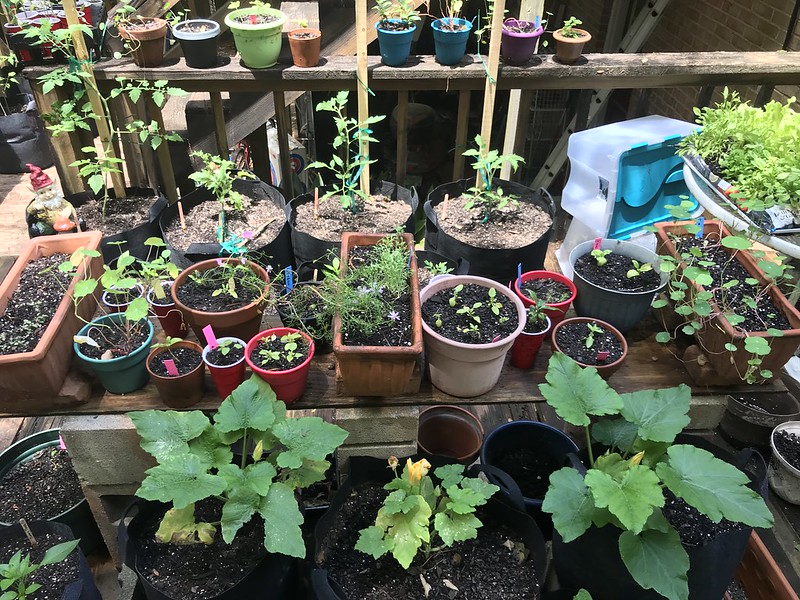 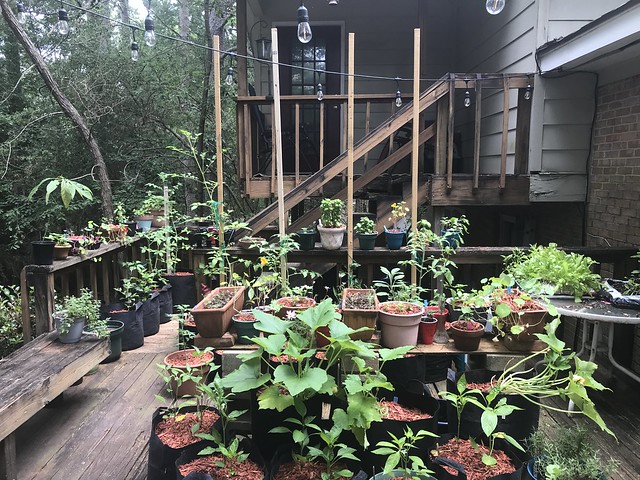 June 10 Radishes ready to be pulled. 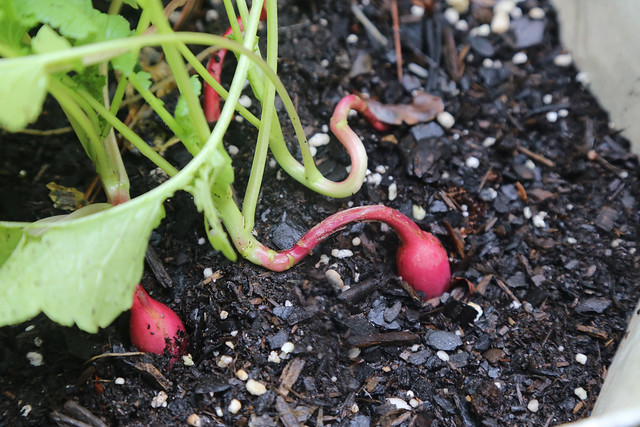 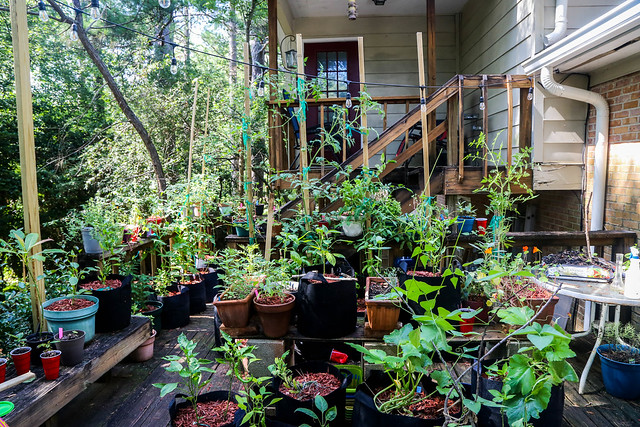 I purchased this beautiful Strobilanthes from Lowe’s. I did not grow this from seed, 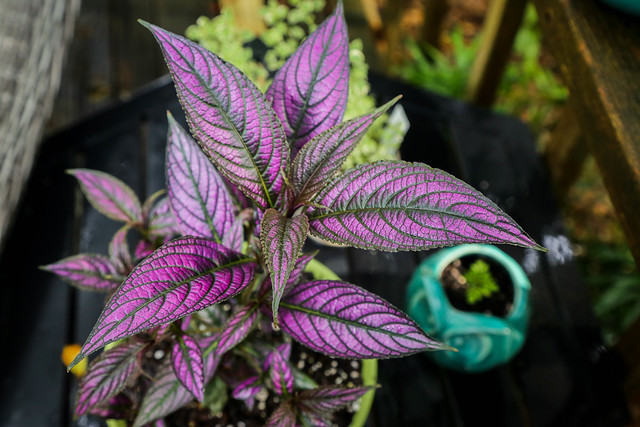 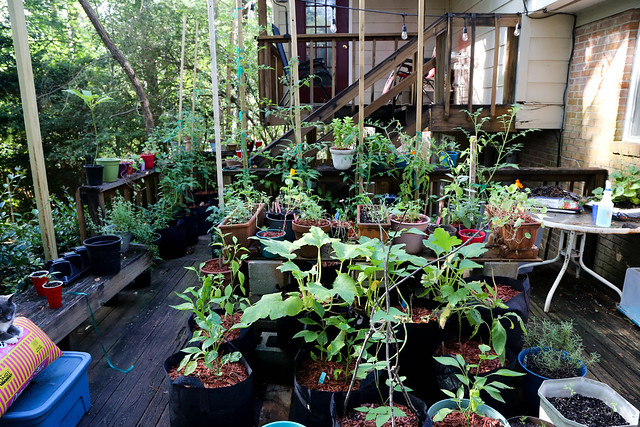 French Dressing Radishes that I planted from seed back in May (I believe it was) and harvested. 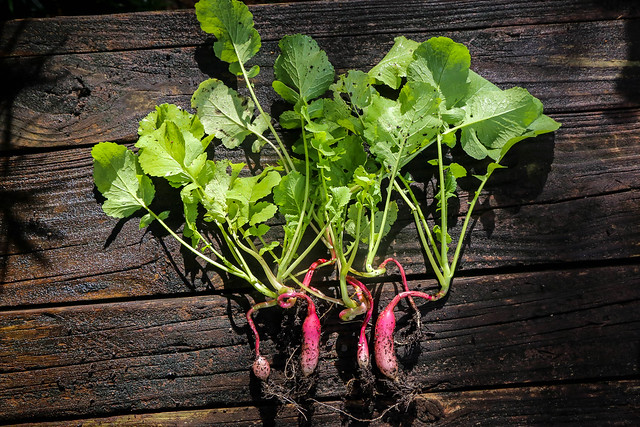 Variegated Oregano that I purchased from our local Ace; did not start from seed. 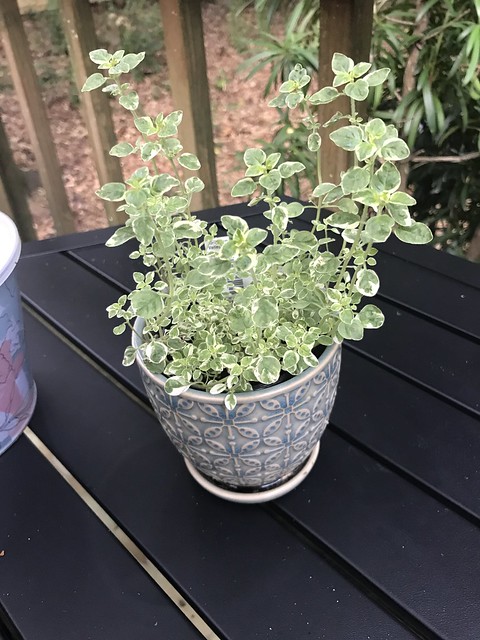 One of my garden helpers, who clearly has her priorities on the Catnip, which came back from last year. 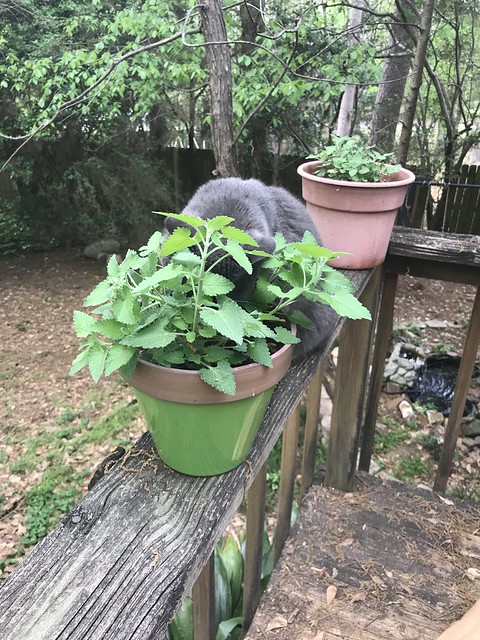 My very first almost ripe tomatoes (besides cherry tomatoes). This is called Chernobyl. I was just outside and really looked closely at this plant. It looks like somehow this tomato plant got topped, which means halts the upward growth and for a tomato plant usually means it won’t produce anymore flowers = no more tomatoes. 🙁 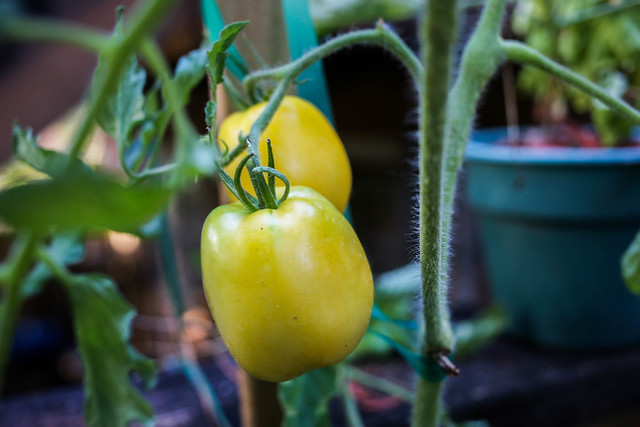 Beautiful tomatoes of the rainbow. These are Sweeties. 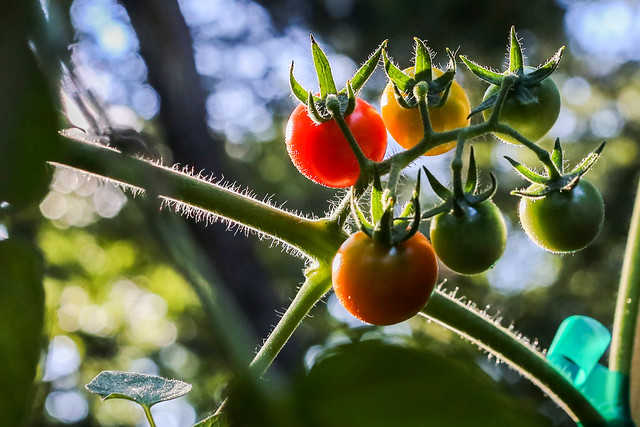 Bugs in the Garden 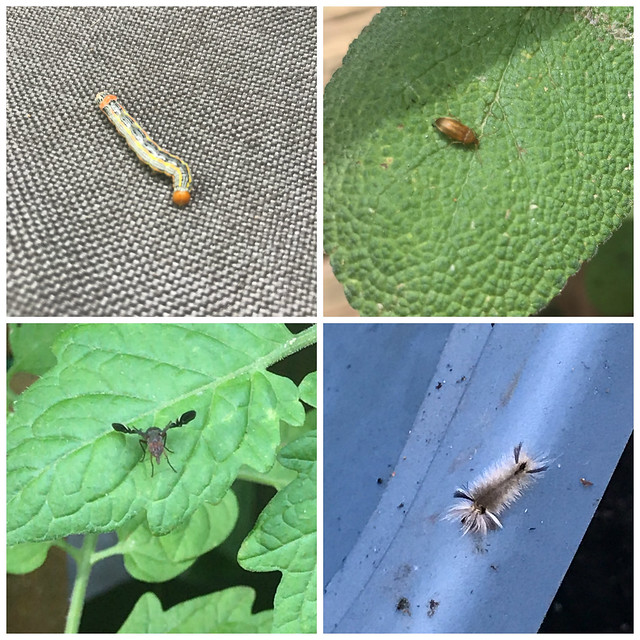 These Tiny Tim are really pretty how they grow in bunches. 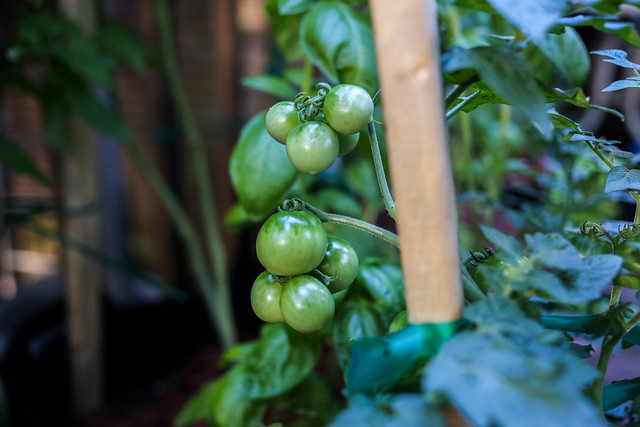 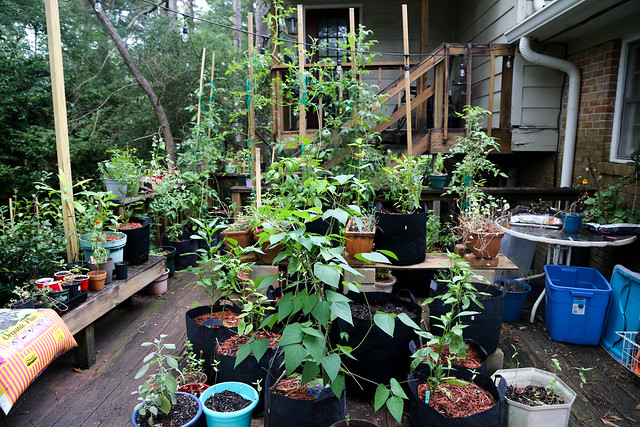 That Dr. Wyche’s Yellow Tomato is blushing and will be ready to pick soon! And look at the Basil that I have growing in the same pot as the tomatoes. My Basil is so tall. I haven’t done a great job of keeping them pruned to increase the bushiness. Instead they’ve grown in height. 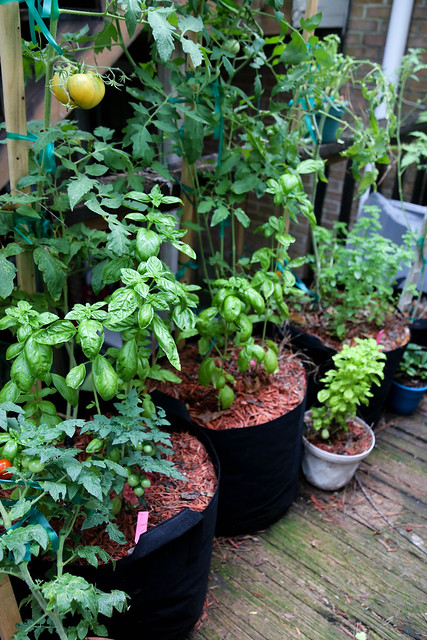 Marigold are all so unique and remind me of my Grandmother. They are also great companions that enhances the growth of basil, broccoli, cabbage, cucumbers, eggplant, gourds, kale, potatoes, squash, and tomatoes. Marigold also makes a good companion plant to melons because it deters beetles. I’m not growing any melons this year, but hope to try growing some next year! 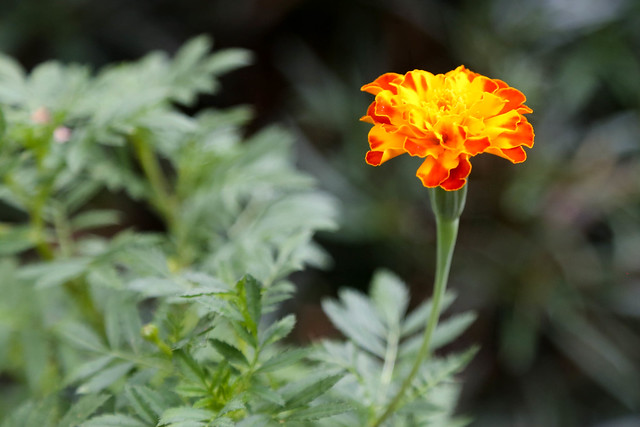 This sums up what how my garden has progressed!

With that, I think I’m going to wrap up this post. I plan to share more about my summer garden more often, especially as some of my plant’s seasons will be finishing up here in the next month or so.

Do you garden? If not I recommend watching a little of Roots and Refuge. Jess will have you wanting to at least plant something next year or maybe even for Fall!