The first day I was in Auburn, Rob and I decided to walk to campus. We ended up over at the stadium, where it was open, because they were inside doing some cleaning. Rob talked me into going in, so we could go all the way up to the top to look out over campus. Needless to say, it was an awesome site to see. Jordan-Hare is much larger than Texas Tech’s stadium and it was a really beautiful view of campus. 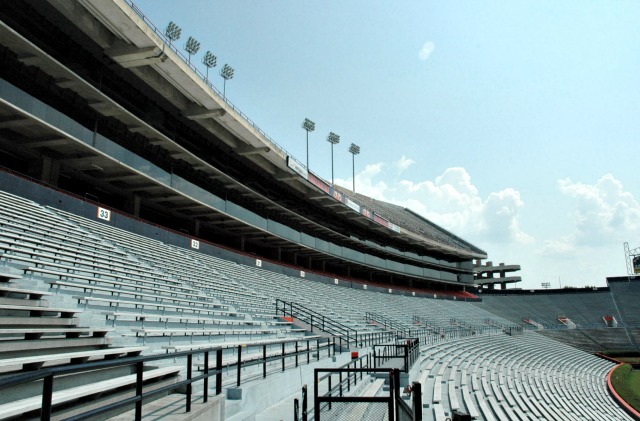 After coming down, as we were walking to the gate where we came in, we found that the gate was closed…tight…locked!!! We walked all the way around looking for an opening and found nothing. No where to get out! Rob could actually squeeze through some of the gates, but with me, no such luck. We had to find a place that we thought we could climb over the 12 foot fence. At this point, I am not loving Rob too much. We found a place that didn’t have barbed-wire and discussed how I was going to get over this towering fence. Rob being quite athletic, not fearing the climb, could bound the fence in seconds. No problem. With me, I was frightened just looking at the lofty chain-link fence. I put one foot in his hands and the other in the fence and pulled with all my might over the top. I had to be careful not to scrape myself from the chain links that stuck up over the top of the fence. As I fell to the ground, I felt extreme pain. Looking down, I saw blood pouring from my hand and I knew from the pain in my inner thigh that I had not cleared the top of the fence. Rob still on the other side of the fence ascended over the fence in a matter of seconds. He tore his shirt off and wrapped it around my hand, as he knew I was losing a lot of blood quickly. Some nice college guys were driving by and must have seen what happened. They stopped and asked if we needed a ride. Since we had walked from our apartment, we were quite a ways from it at this point. We jumped in and had them take us home. We thanked them profusely and then jumped into our car.

I don’t remember getting to the hospital, but we got there. Never having gone to an emergency room before, I was intimidated and proceeded reluctantly. Since Rob shirt was covered in blood by the time we got there, they took us straight back. I ended up with 6 stitches in my hand. So not only was it my first day in Auburn, it was my first time to get stitches. Rob never expected our trip to campus to end up being so memorable. That night we stayed in as I was looped up on pain meds. He treated me to delivery from Dinero’s.