Sunday we started the day off with breakfast in the Dining Room. After breakfast, we took Alex to Camp Carnival and the rest of us went to Oceans Plaza to play Kryptic Challenge. Then, we watched Movie Charades. Host Battle Match Game and TV Theme trivia were next. Later we got our swimsuits on so that we could go out on deck for some sun and swimming. We grabbed some burgers and fries from The Grill. The kids went up the Water Works slides and Rob and I found some chairs out on deck. We soaked up some sun and enjoyed the Aft pool. We had a hard time finding a spot that was smoke-free, as it seems they’ve changed the rules about smoking. In fact the entire cruise we seemed to be running from smoke, which was pretty aggravating. 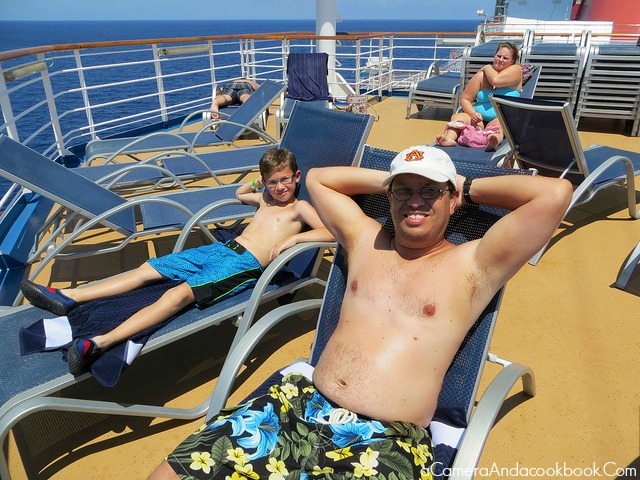 After we ate we decided to move somewhere near the main pool so that we could watch the activities going on there. We had to track down the boys so we could tell them we were in a different spot. Once we finally found Drew, we were made aware that he had “lost” Alex. He had told Alex that they had to come meet us, but Alex didn’t want to stop riding the slide. We all started skimming the area from up above to see if we could see him. We sent Drew back down to look for him. Rob was going to go do the slides and while he was over there he looked for him. After about 30 minutes, Alex showed up at our new seats and the look in his eyes quickly revealed he knew he was in for it. I lectured him for a straight 2 minutes hardly taking a breath. Although, through all the anger and teaching of a lesson, no plan was advised if this were to happen again…

We continued to hang out and watch the FUN going on down on Lido deck, from the hairy chest contest to Master Mixology. Later I was about done with all the fun in the sun, so I left the boys to go get a shower and rest up a bit before dinner as that was our first formal night. 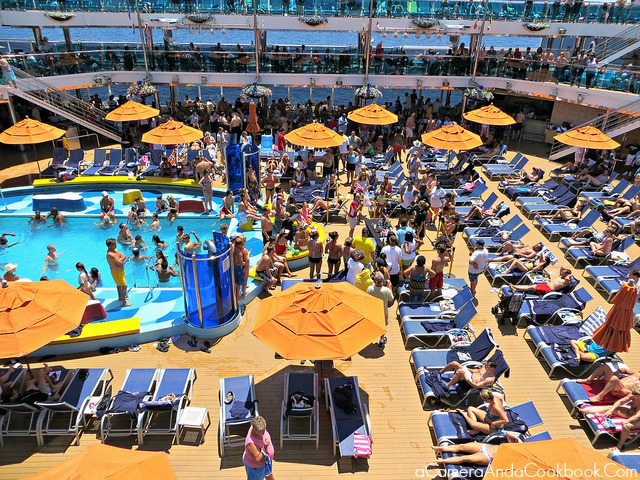 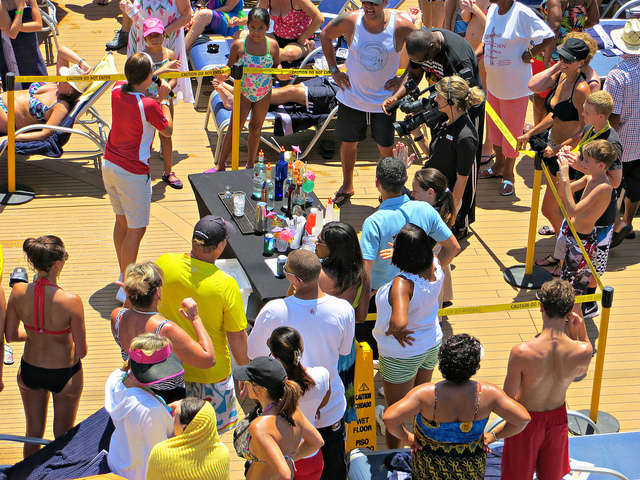 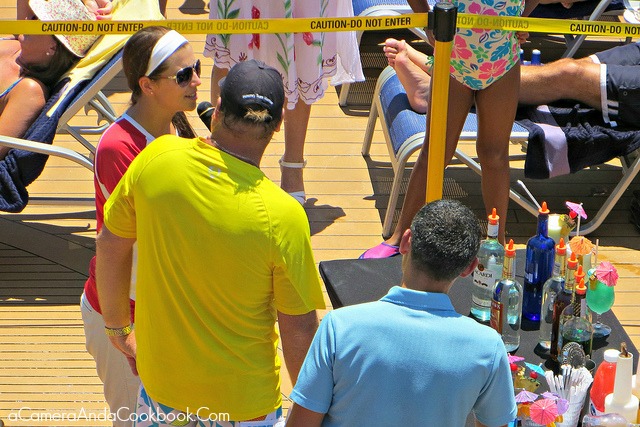 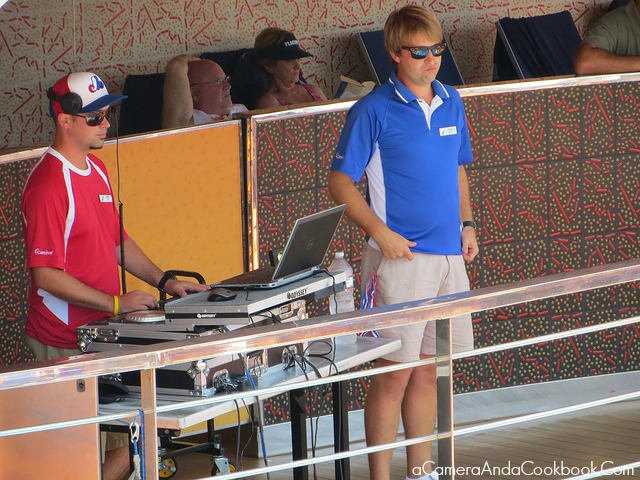 The boys made it back from the slides in time to get dressed up for dinner. Here’s my handsome boys at the dinner table. 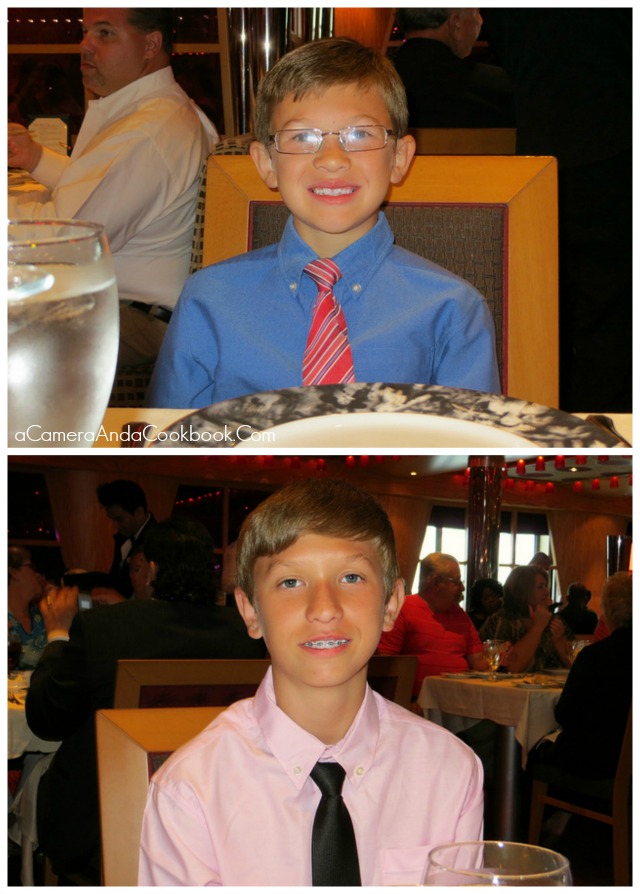 For our formal night the boys and Rob enjoyed broiled Maine lobster tail and jumbo black tiger shrimp as their main entre. We also had alligator fritters for an appetizer. Yummy! I’m not big on lobster so I ate the grilled fillet of corvina roasted broccoli. This is also the night we were treated with strawberry bisque! A favorite of mine. Drew and I had caramelized apples on puff pastry for dessert. Alex had strawberry ice cream and Rob had cherries jubilee.

After dinner, we got a few pics of the boys dressed up. 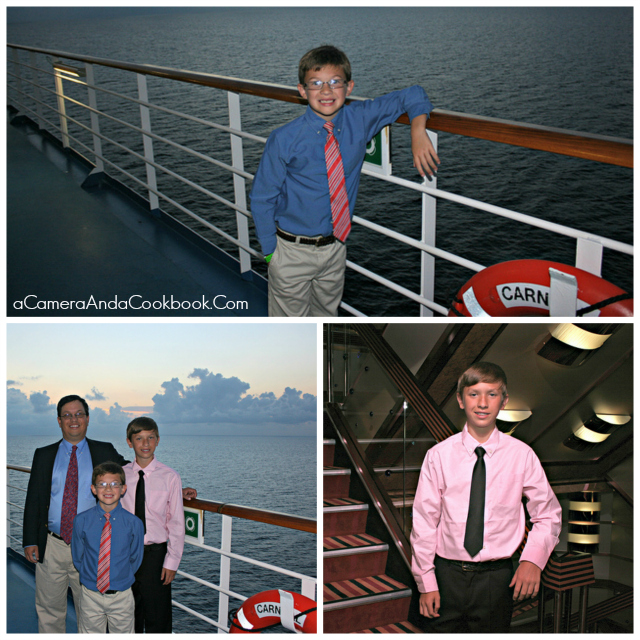 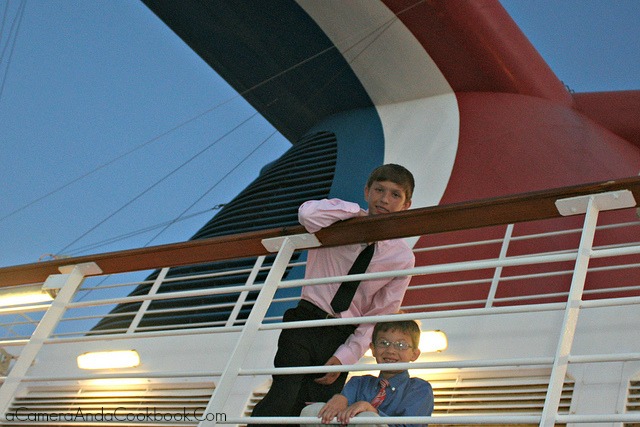 After pictures, we went to a couple comedy shows, one with Russ Nagel, the other with Eddie Clark. Later, we put Alex to bed and went and watched the show in the Encore Theater called Get Ready.

Our nightly towel animal..any guesses what it is? 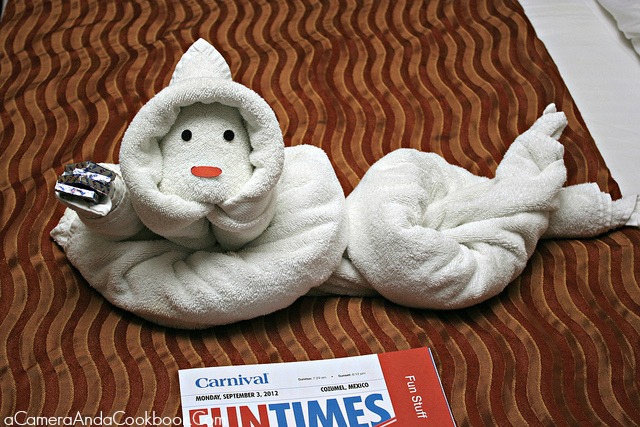 Rob and I went to the late night Adult only comedy show with Eddie Clark. So funny! This ship’s comedian was awesome.