As you can see from the title I am behind my weekly posts for an entire month. Sheesh! Time flies. Between Drew leaving for his internship and school getting out for Alex, a trip to Seattle, and a coworker dying, my boys going to Omaha, the last month has gone by so fast and I’ve had no time to document life. So I’m going to try and get everything up to date here. 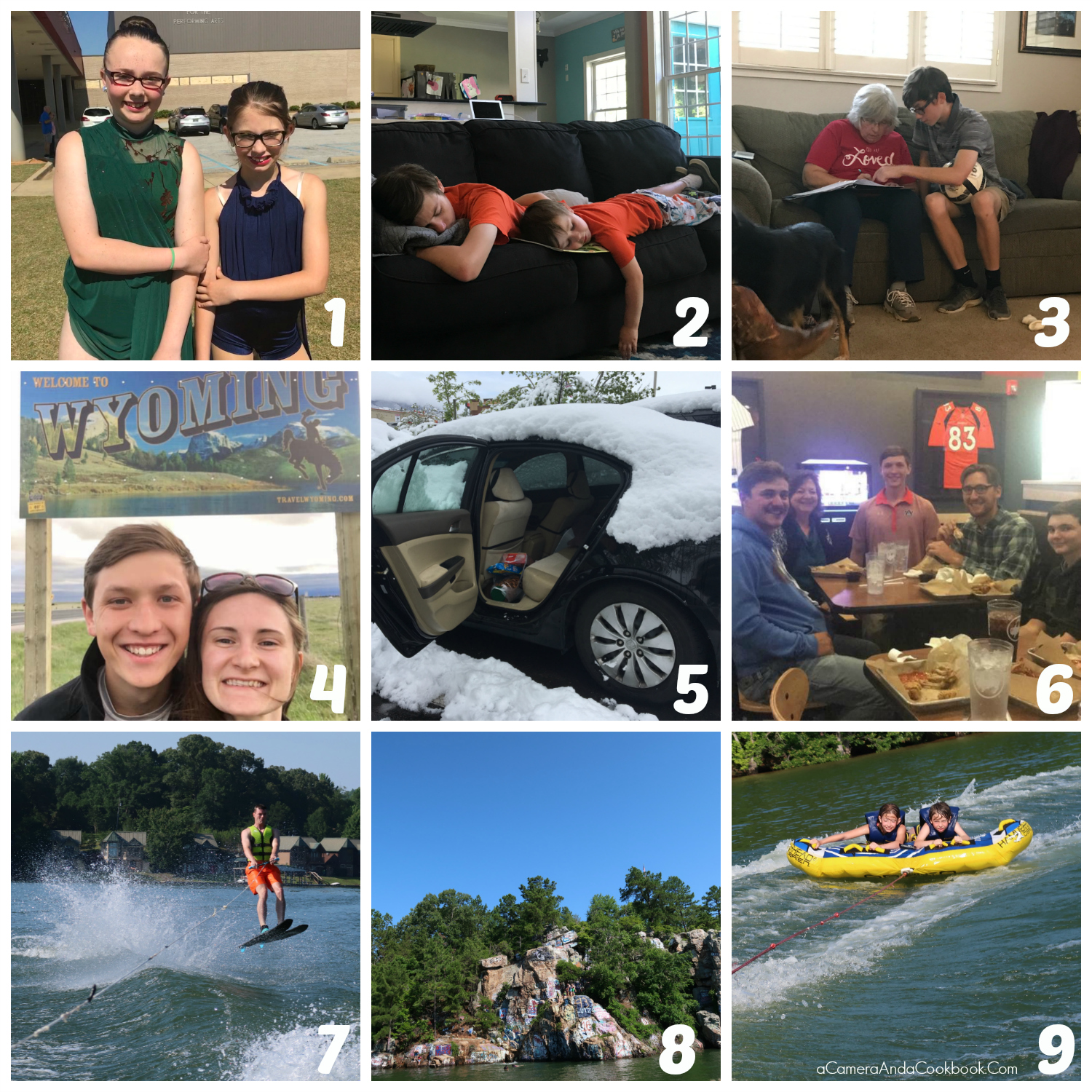 1: My nieces stayed with us over the Memorial Day weekend, which also happens to be their recital weekend. They were thrilled to get their pics taken before their day began. Can’t you tell?
2: Part of Recital Saturday included me going to watch the other half of my sis-in-law’s family. The boys stayed at home Memorial Day weekend with Rob’s mom, but I went over to watch the boys so my mother-in-law could go to one of the recitals.
3: Alex helped Gramma with some music she was deciphering for handbell conference. I thought it was a sweet moment.
4-5: More pics from Drew and Caitlyn’s adventures in Wyoming and Colorado.
6: Drew with his 2 roommates and Ms. Connie who was his host family for the first couple of weeks.
7: Memorial Day weekend – Sunday when we got to get out on the lake. Joe riding the waves.
8: Memorial Day weekend – We rode out to Chimney Rock, where one of my nieces jumped off. Sweet Mer-Mer went with her and gave her courage to go up and finally jump.
9: Memorial Day weekend – One of my nieces and the oldest nephew tubing. His first time and I think he was pretty scared, but had fun. 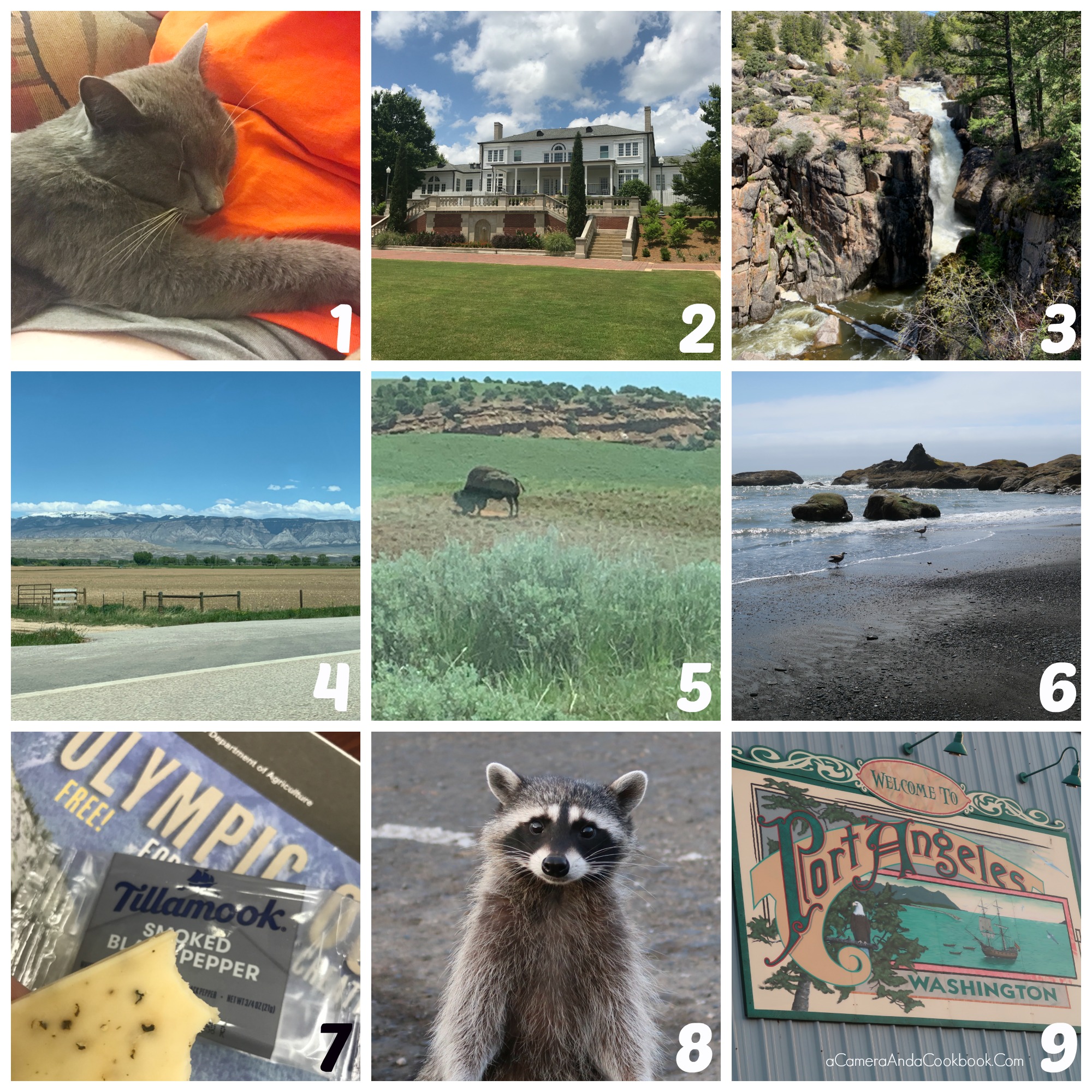 1: I think some one miss us that weekend!
2: I snapped this while walking across campus one day. This is from the Quad. 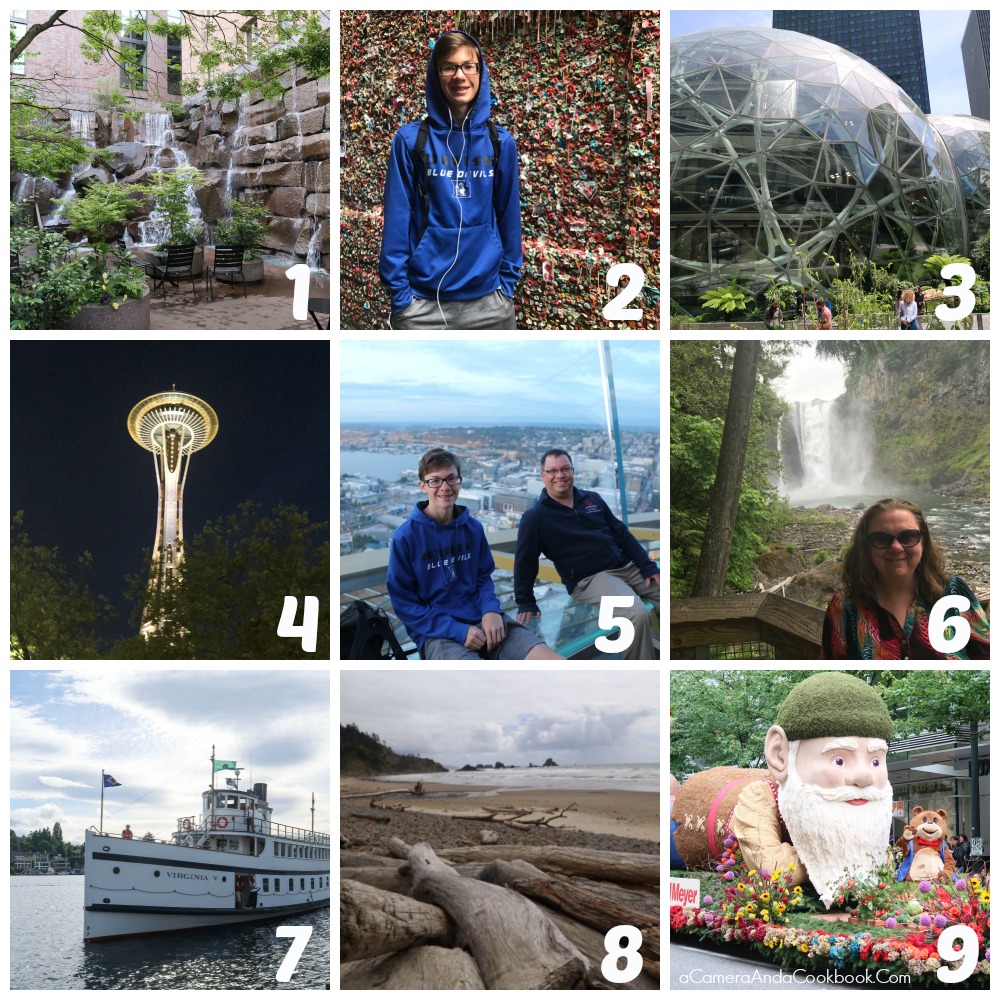 More pics from vacay in the Pacific Northwest…
1: UPS Waterfall – Did you know UPS was started in Seattle?
2: The Gum Wall – one of the coolest things I’ve ever seen. Watch where ya step!
3: The Spheres
4: Space Needle at night
5: Alex and Rob hanging out over the city on top of the Space Needle
6: Snoqualmie Falls
7: Virginia V Dinner cruise exploring Lake Union and Salmon Bay
8: View from Indian Beach at Ecola State Park
9: One of the coolest floats at the Grand Floral Parade 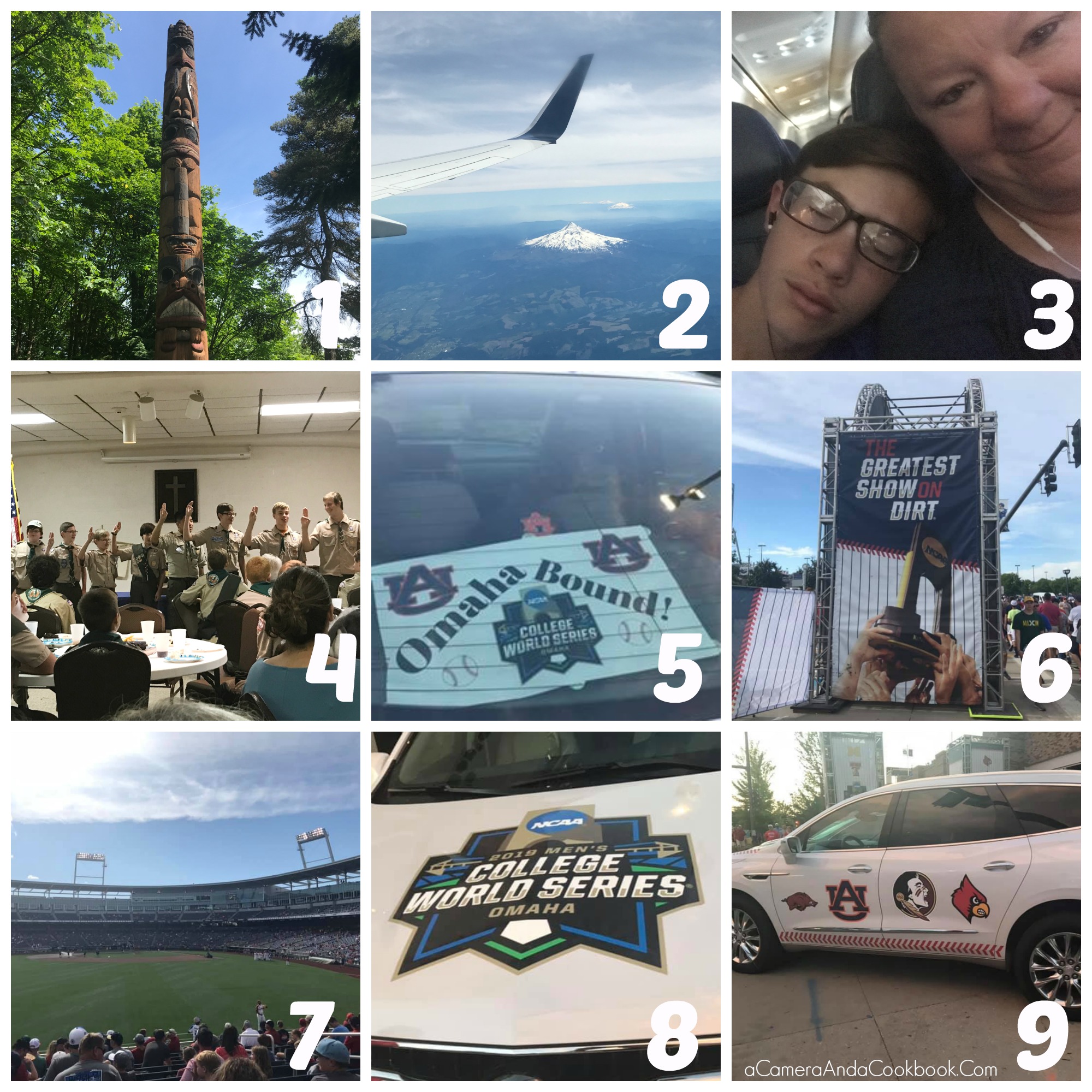 1: On our last day of the trip we didn’t have a lot of time, so we just drove around a bit to kill a little time. Rob drove up to Oregon Health & Science University, because he had met some people who work there at his conference and they talked about the views from up there. We stopped to take in the view of one of the mountains and there was this totem pole, which are so amazing to me.
2: View of Mount Hood from the airplane not long after taking off from Portland, OR.
3: I couldn’t resist. Alex sleeping on my shoulder on our flight home.
4: Monday after we got back our scout troop had a court of honor. Here’s Alex getting swarn in as instructor. 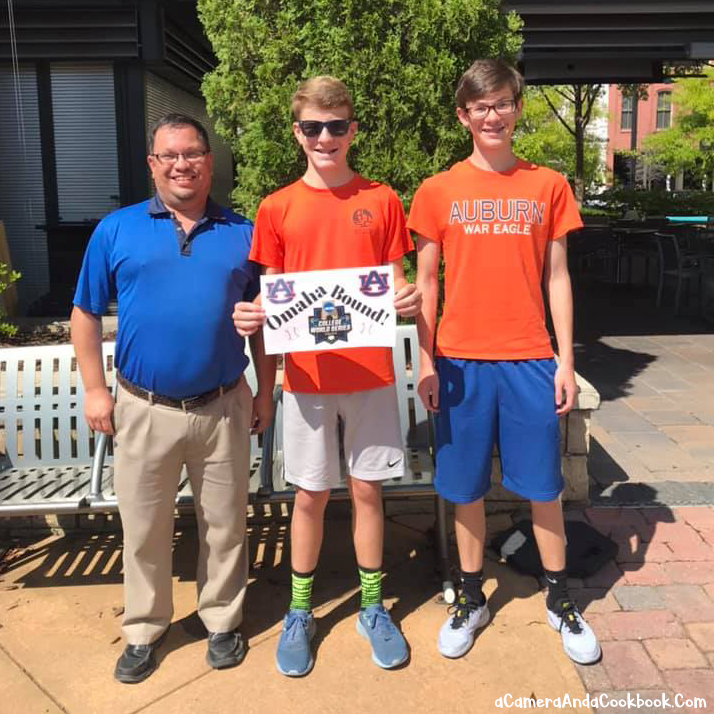 Before Auburn bulldozed the NC Tarheels in the final game of the super regionals on Monday afternoon, Rob had made the decision that he would not go to Omaha. Although, he’s always said if Auburn makes it to the College World Series he would be there, he didn’t have anytime off and its a long drive…blah blah blah. After Auburn’s big win over the University of North Carolina, baseball coach Butch Thompson gave his after game interview where he said if you’re an Auburn fan and you’re a baseball fan, you need to find a way to get to Omaha! Rob felt like Butch was talking directly to him. Rob and his friend Ben began scheming. The plan panned out for Rob, Alex, and Gabe to drive from Auburn where they would meet up with Drew and Ben. Since Drew is in Casper, Wyoming for the summer, he’s only about 4 hours from our friend Ben who was in Denver on business. So Drew drove down to Denver, spent the night in the hotel where Ben was, and then they got up early and drove 9 hours to Omaha. 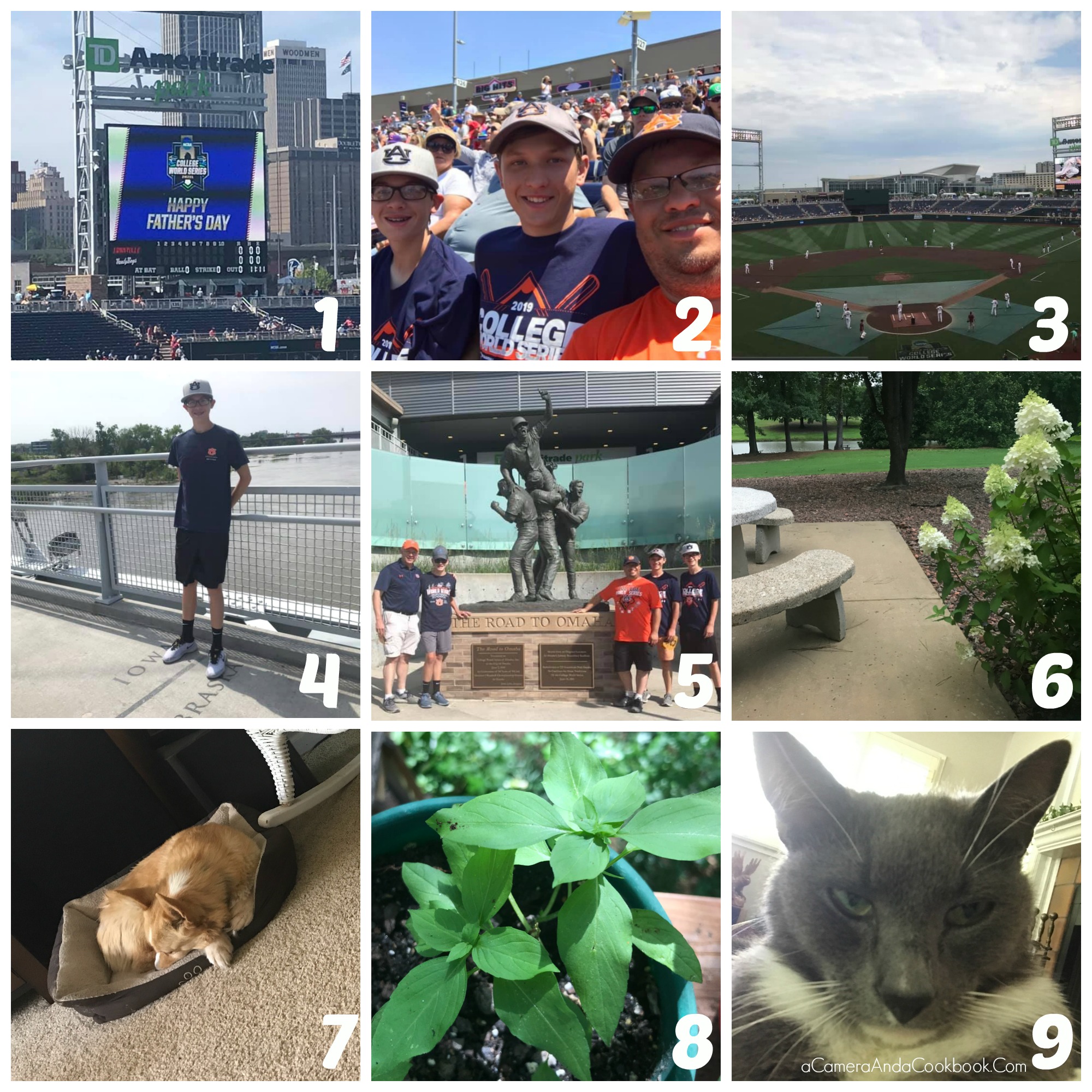 1: Rob got to spend Father’s Day at TD Ameritrade Park watching baseball. That evening they got to see Auburn play and lose brutally before getting their last out in the 9 inning. Just heart wrenching! Drew had to head back to Casper for his internship after that game, but everyone else stayed until Tuesday to see Auburn play in the Loser’s bracket.
2: Here’s Rob with the boys on Father’s Day.
3: View from one of the games, I think this was Monday.
4: Alex stands on the Nebraska Iowa border.
5: The fab five before Drew had to leave.
6: This was taken on Saturday night when Rob and I were up at his work getting paperwork ready for the Boy Scout Troop to go to summer camp. A storm was about to roll in.
7: Lazy Daisy
8: One of my herbs I propagated. I think this is Cinnamon Basil.
9: Katniss has been so needy lately. She wants to sit in my lap a lot more and rubs up against my leg when I don’t reach down an pet her.

GOINGS ON
Wowzas! That was a lot. I guess what wasn’t included from the last several weeks is that on June 4th my coworker who works 3pm-12am was killed by a drunk driver on his way home from work that night. This last Saturday while my guys were in Omaha, a couple of my coworkers and I spoke at his funeral. Earlier that week one of library patrons made a comment about how terrible motorcycles are. Yes, while they can be dangerous, drunk drivers are what is terrible!

While the guys were in Omaha, I spent some time doing a serious cleaning of my bathroom. Our towels are falling apart and the shower curtain is looking less than desirable, so I decided to replace them as well as cleaning all the cabinets out, etc. I put in shelf liners under the sink and in the drawers, which makes a big difference and ordered a new shower curtain and went shopping for new towels. I still need to wash all the new towels, but once I do that I’ll post some before and after pics.

THOUGHTS
This summer has been so busy and crazy and it is flying by so fast!

If you made it all the way through all that, you’re a rockstar!