This month I was happy about: good new from Drew, which I talk about later in the post!

This month I was sad about: I have been sad about a family member that is going through a tough time, but things seem to be a bit better as of now.

I decided to change my rating system to the simple stars rating that are pretty self explanatory.
★ ★ ★ ★ ★

TV Shows I watched were:
Big Sky (ABC) – Season 1 Part 2 – Didn’t make too far because of problems with the ABC app.
Manifest (Netflix) – Season 1 – Really liked the first few episodes, but then it gets weird. Not sure I can continue.
Virgin River – started rewatching since Season 3 is coming out soon!

Rob and I watched:
For All Mankind (Apple TV+) – ★ ★ ★ only watched 2 episodes ✓ For those that watched this, does it get better?
America’s Got Talent (NBC) – ★ ★ ★ – This show gets on my nerves. I brings me to tears, but I could so do without it. We watched it with the kids because they’ve always enjoyed it. Alex never wants to watch it when Rob and I are watching it so it’s just Rob and me. Rob enjoys it enough to keep watching it.

My favorite song this month was: You by Regard

What I remember about work was: a pretty uneventful month. 🙂

A lesson I learned this month was: if you just have patience God has a plan that you may not understand until much later.

Some friends and I: met up for cookbook club. So good to have girlfriends to talk to and share life with.

My favorite pic that I took was: I took several pics of the stairs on the side of Samford Hall, one of which I posted on my iSpy. I really liked this one too. 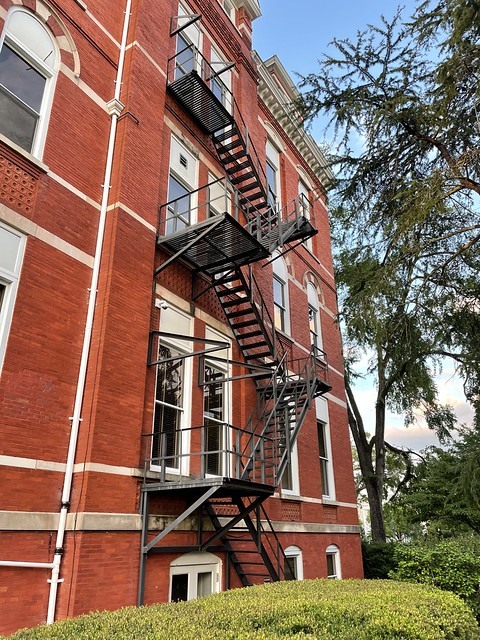 The favorite thing I cooked was: Chicken and Broccoli One Pot Pasta meal.

Drew: got a job. A real job. Using his degree. Salaried with benefits. He gets vacation and sick days. So excited for him. That means they (he and Caitlyn) get to stay in Auburn!

Alex: enjoyed his weekend at the Chrysalis retreat. I was so happy he spoke at closing saying what a great time he had.

Rob: enjoyed half a week at Boy Scout Summer camp and the other half at the Chrysalis retreat.

The thing I’ll remember most from this month was: Drew getting a job!