In 2001, Rob and I wanted to do something for spring break and we had thought about cruising. Although, we didn’t know much about it. We had some information we’d heard from various sources. In January, we decided to go visit a travel agency and see what kind of info we could get. We ended up at Adventure Travel with an agent named Sue, who could not have been a better source. She is a cruisin’ queen, with lots of personal experience. She knew all the ins and outs of cruising. After talking with her for over an hour, we decided on a 5 day cruise out of Tampa, which worked out great due to the fact that Rob’s Grandmother lives near there and had agreed to keep Drew for the week.

We went on a 5 day Carnival Cruise that left from Tampa and went to Grand Cayman Island, Playa del Carmen, and Cozumel. 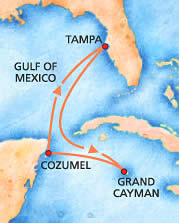 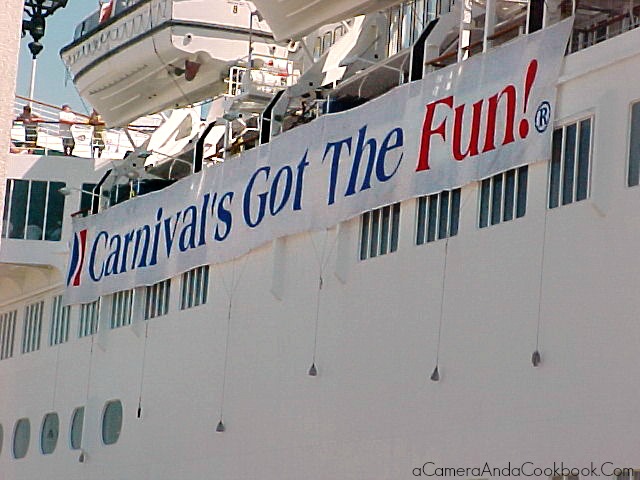 Rob’s grandparents dropped us off at the Port of Tampa where the M/S Jubilee waited to take us on vacation. There we said good-bye to Drew and boarded the ship. We unpacked, learned our way around and attended the mandatory life boat drill. Then, we ate dinner (yum!) at 8:45 and attended the “Welcome Aboard Show” in the Atlantis Lounge at 10:45. This included a funny comedy act by Kenny Miller! 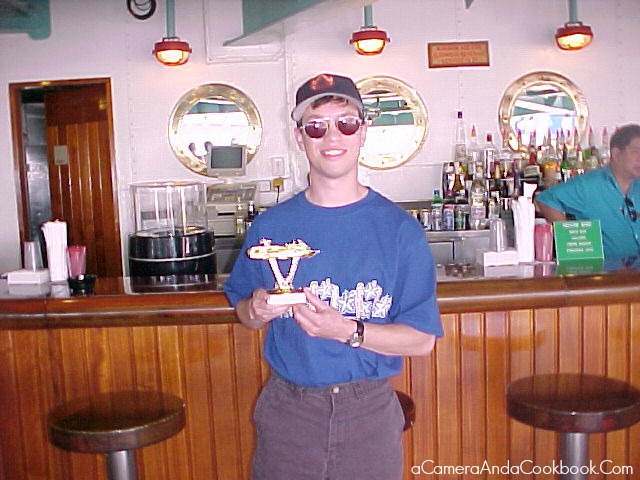 After a good night sleep, we woke up to enjoy our day at sea! We had breakfast and then headed to the Lido deck (poolside) so that Rob could compete in the golf putting competition at 9:00. After a four round competition, Rob ended up winning it all! Then it was time to relax on deck before lunch. At 2:30, we attended the Game Show Mania in the Atlantis Lounge where Rob was picked as a contestant. Rob wasn’t as lucky and finished as a runner-up. Shortly after, we participated in the “Battle of the Sexes” where the men beat the women! Before dinner, the captain threw a cocktail party and we got to meet the staff on board and have free drinks! It was our formal night and Rob enjoyed the lobster that he had been waiting months for during dinner. After dinner at 10:45, we saw the “Hollywood” show in the Atlantis Lounge.
Day Three: Monday, March 26, 2001 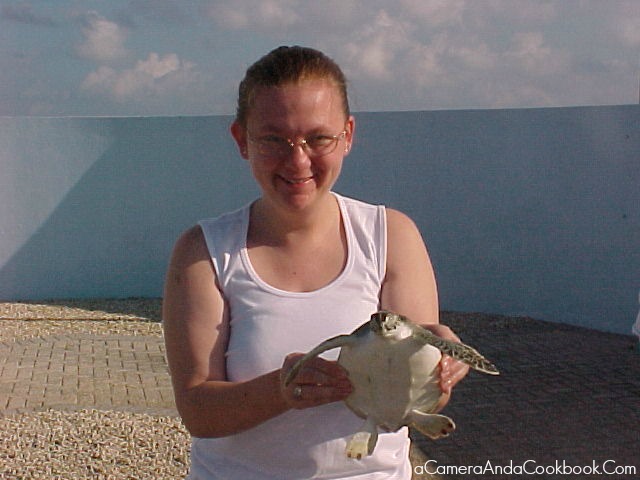 When we woke up, we were about to anchor just off the coast of Grand Cayman Island. After a quick breakfast in the Funnel Grill, we took our tender boat to Georgetown, Grand Cayman. From there, we took a bus for a quick tour of the island. We stopped at the Cayman Islands Turtle Farm, the Tortuga Rum store, and the famous town of Hell. Along the way we also saw the governor’s mansion and the “Gingerbread House” as well as many banks. Then, we took a 45 minute boat ride out to a sandbar and swam with the stingrays! We could pet and hold them (they felt like velvet). Finally, before leaving Georgetown, we walked along Seven Mile Beach and took in the beauty before taking a tender boat back to the ship. That evening back on board, we attended dinner and the show at 10:45. Tonight we saw the magic and mystery of Mark Miller and the hysterical comedy of Dean Gaines in the Atlantis Lounge.
Day Four: Tuesday, March 27, 2001 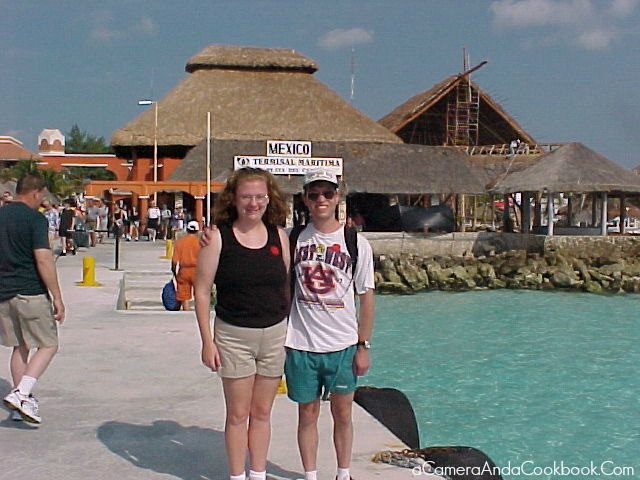 As we woke up, we were nearing our next destination at Playa del Carmen, Mexico. We anchored just off shore and took a tender boat into the small Mexican city to hop on a jeep for our Tropical Adventure tour! We took a jeep caravan out of the city and into the wilderness of the Yucatan Peninsula. After traveling more than a half an hour down a bumpy wilderness path, we arrived at Aktun Chen. Aktun Chen is a secluded wildlife park where Spider Monkees, snakes, birds and other creatures live. The main part of the park, however, is the caverns. We spend a while exploring the caverns and the underground lake. After this, we drove to a secluded beach called Xpu-Ha Beach. At Xpu-Ha, we enjoyed fish or beef tacos grilled on the beach and swimming in the beautiful Caribbean Sea. Then we drove back to the pier where we took a tender boat to San Miguel, Cozumel where our ship had docked. We spent about 3 hours shopping and enjoying an authentic Mexican dinner in Cozumel before boarding the ship around 9:30. This evening, we retired early because we were exhausted.
Day Five: Wednesday, March 28, 2001 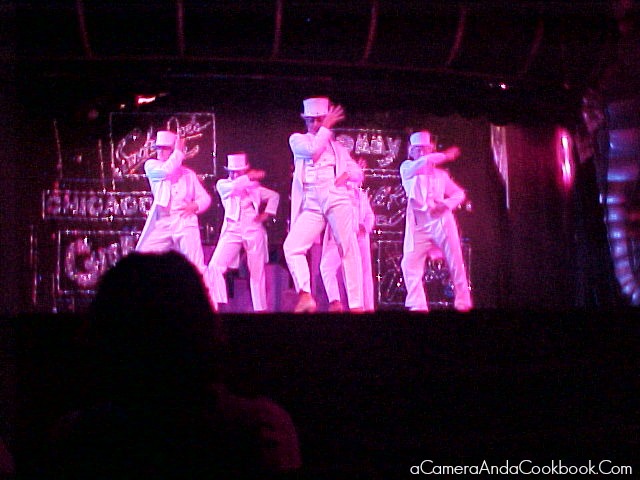 After sleeping in a bit, we looked forward to our last day at sea. The next stop was Tampa, Florida. We grabbed a quick bite to eat and then laid around on deck. At 1:00, we watched in amazement the ice carving demonstration on the Lido deck (poolside). Then, we had lunch and then went to the “Newly Wed/Not So Newly Wed Game” in the Atlantis Lounge at 2:30. We only watched this one! We did a little shopping on board and enjoyed relaxing on the deck in the afternoon. That evening, we had our last dinner on board and then headed to the show. That night we saw “Broadway” in the Atlantis Lounge at 10:45. Then, it was on to the midnight buffet. Why not? Then, we headed to the cabin to pack and get ready for our last night’s sleep on board. 🙁
Day Six: Thursday, March 29, 2001
We arrived safe and sound in Tampa around 7:00 in the morning and we rushed off the ship to see Drew! Needless to say we had an absolute blast and will be planning another cruise ASAP. 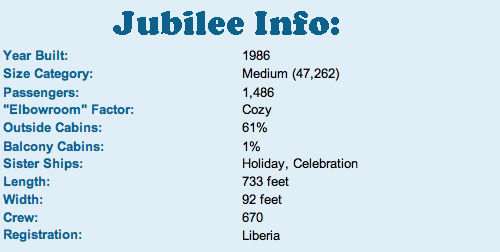 **Please excuse the quality of photos as these were taken with our first digital camera, the Sony Mavica, you know the one that uses floppy disks? Ha!

You can see all my cruising posts listed on my Cruising 101 Page.