Friday we got up, had a quick breakfast, and headed out to see if we could get any fish to bite. Since we needed to find out a good place to fish and get some bait, so we stopped at Paradise Bait and Tackle. We saw signs for it as we drove toward the river. Turned out to be a little building on someone’s property. My MIL had to use to restroom, so the man called up his Mama and asked, “are you dressed? cuz I gots a young lady customer who needs to use the facilities.” There were several small fish caught and thrown back in. After an hour or two of fishing, lunch was in order, before our next adventure. We ate pulled pork sandwiches with mac ‘n cheese and beans back at the cabin.

Then we went to Young Harris College for a private tour and cosmic concert show. Rob was in the Sky Club when he was in college there, so he was able to set it up with the current director at the Planetarium. Screen during the cosmic concert After the show, Rob showed us around campus a bit. We got in the car and drove around campus. We saw some small falls on campus called Cupid Falls. Then, we went to a park on Lake Chatuge. So beautiful. We ate dinner in Hiawasee at the Daniel’s Steakhouse, which had a buffet. Food was not that great, but was a decent deal for the money.

After dinner we went back to Young Harris Planetarium for the public show. When the show was over everyone at the show was invited to go to the observatory. We were unsure if we should go, because that night it was pretty overcast, in which case we obviously wouldn’t be able to see anything. Drew was super eager to go, so we drove over there to see if it would clear up. When we got there, all we could see was a star called Spica, which isn’t very exciting to look at from the telescope. After everyone looked at Spica, they turned the telescope to see if we could see Saturn, and we were so excited to see it. It was awesome!

This is not my pic, but this is exactly how we saw Saturn that night. 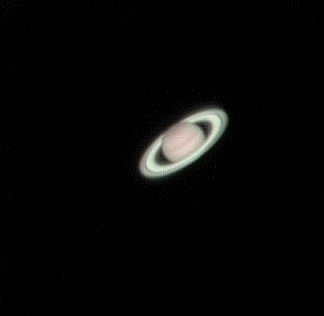 See all the Day 3 pics here.