If you missed my post on the 1st Day of our Cub Scout Mountain trip, click here.

The 2nd day ended up being a little different for us. Many folks decided to go white water rafting on the Nantahala River. This is not a scout sanctioned event, so this was just an outing for any family that wanted to go. Rob and I had decided not to go, because Rob will be doing it soon with the boy scout troop. However, we didn’t want Alex to miss out if he wanted to go, which he did, so he ended up getting to go with another family. Here’s a collage I did of a few pics that one of the Dads took during their rafting adventure… 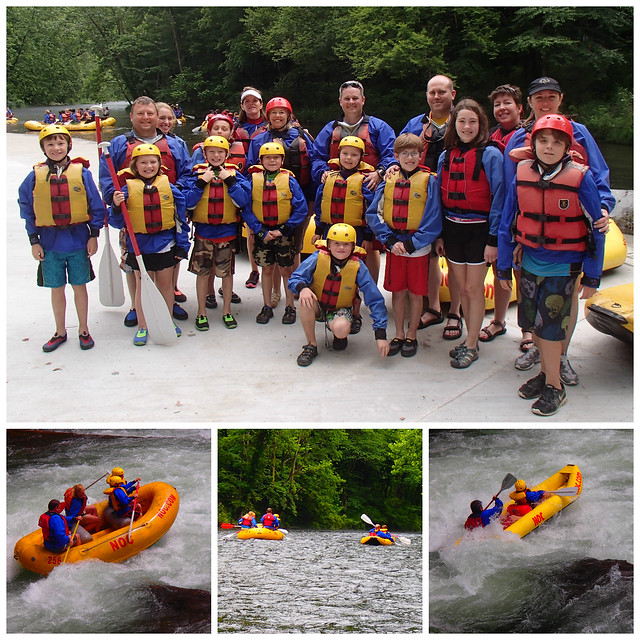 After everyone left for the Nantahala, Rob and I hopped in the car. I had wanted to go to Bryson City. I have been following Ashley over at Lil Blue Boo, who recently moved there and she’s been posting some really cool places. Bryson City is about 35 miles from our campground.

The purple highlight shows the back road we took to get to US 19 headed towards Bryson City. 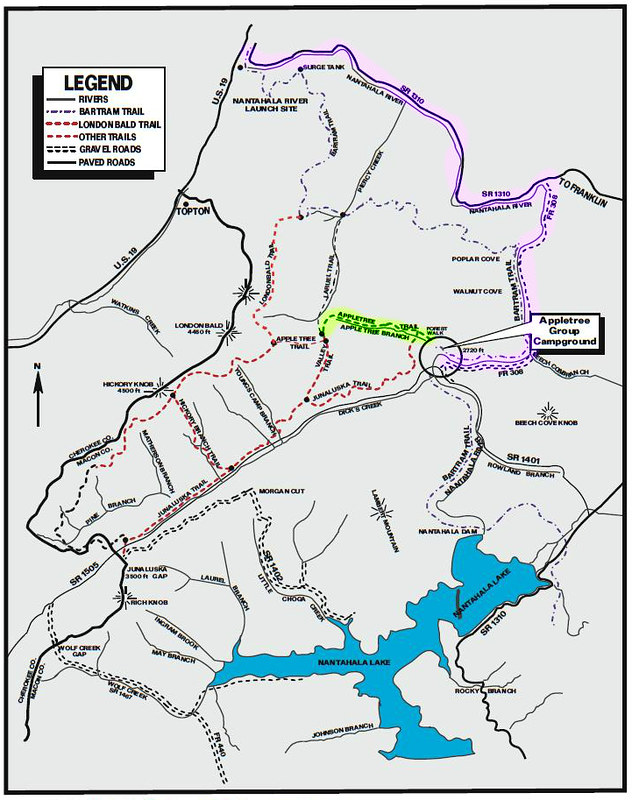 Beautiful scenery along the way… 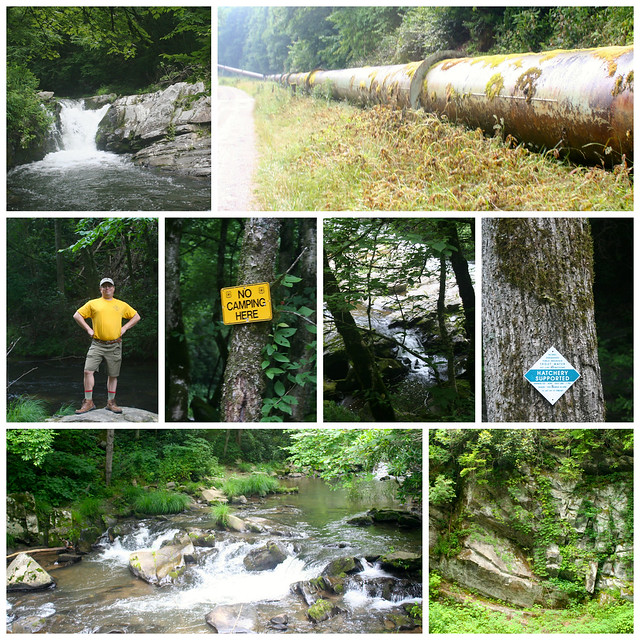 We were actually headed in the same direction as the rest of the people on our trip, towards the Nantahala. We ended up going right by the drop off point that they would be using so we stopped for a few minutes and I snapped a few shots. 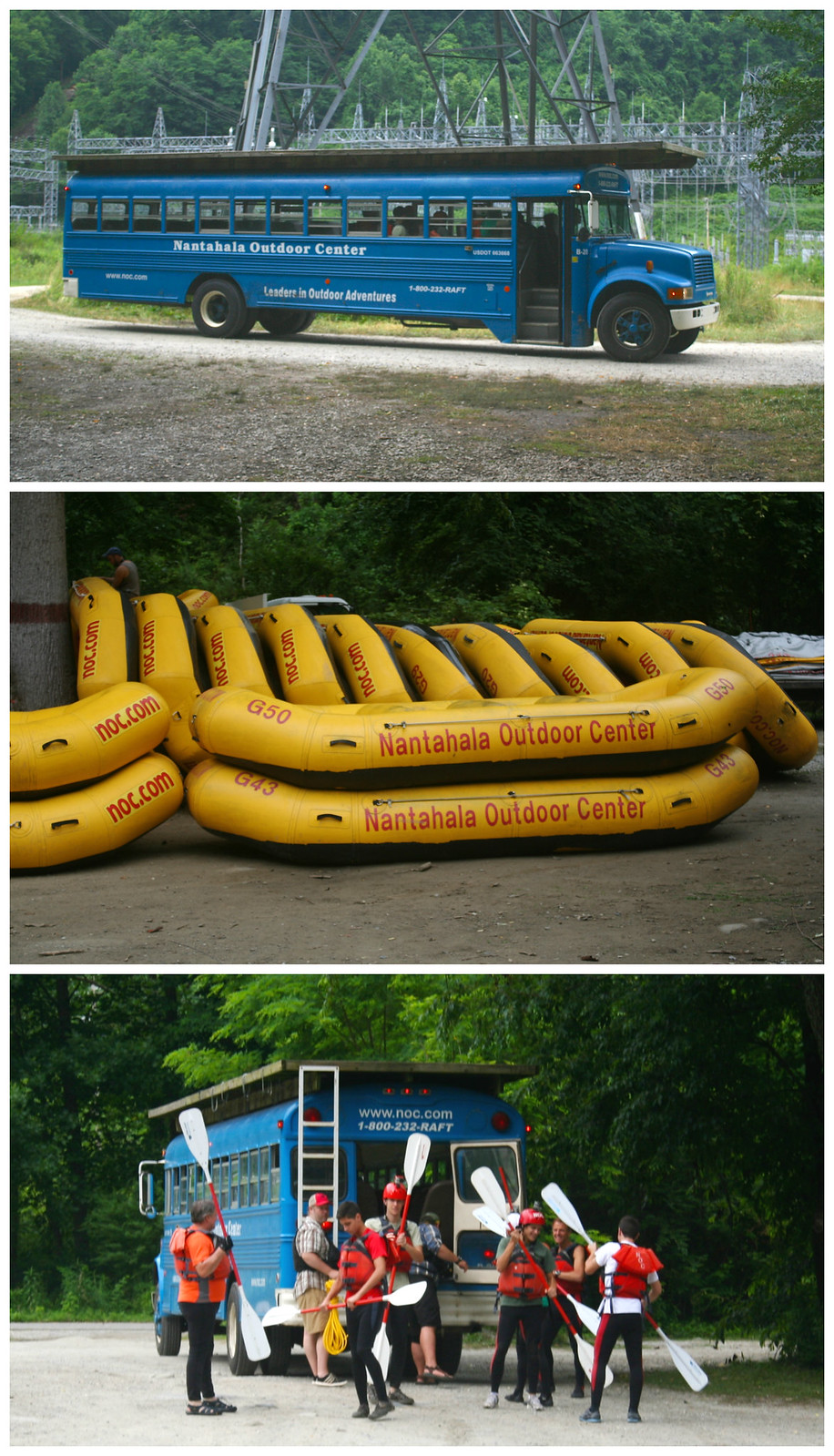 From there we continued our drive on into Bryson City with a couple more quick stops. Bryson City is a cute little town. We stopped at the visitor information center, which is located inside the Swain County Heritage Museum. They were super helpful and pinpointed for us exactly where we wanted to go and how to get there. 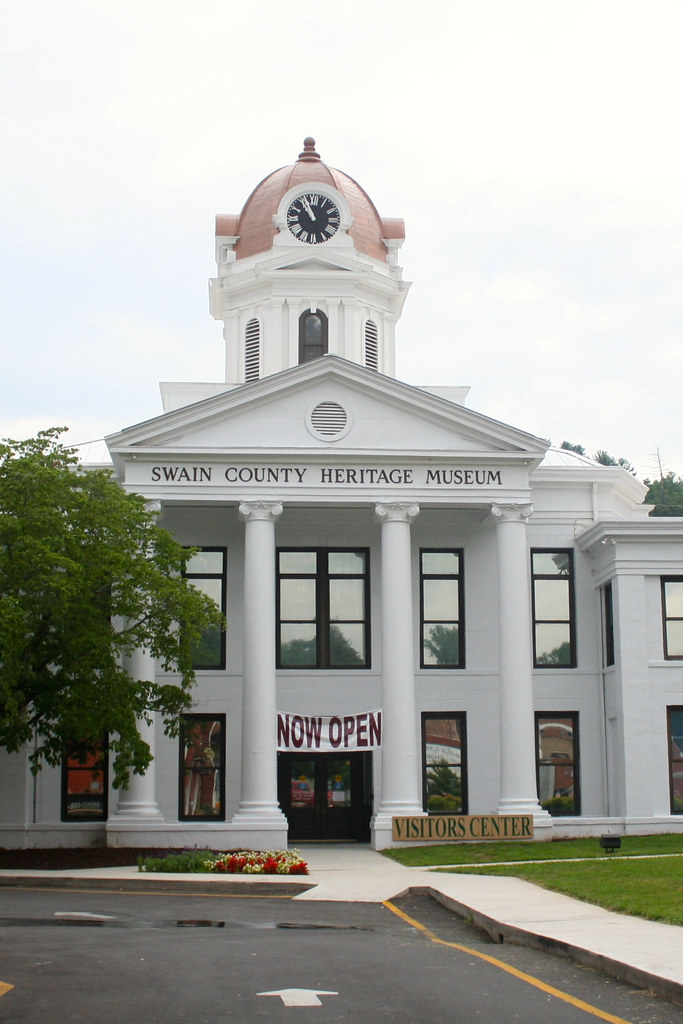 We hadn’t had any caffeine for the day, so we decided to walk around in Bryson City to see if we could find something before we started our site-seeing. 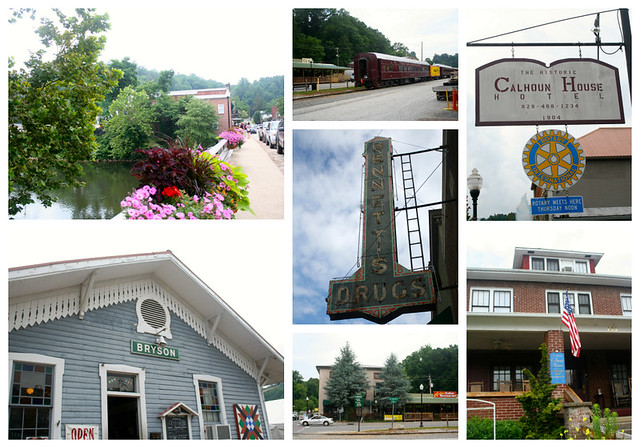 Next, we headed to our first spot of interest, the Road to Nowhere. In the 1930′;s-40’s, the federal government began building this road along with the tunnel that goes through a mountain. Due to unforeseen issues they were unable to finish it. 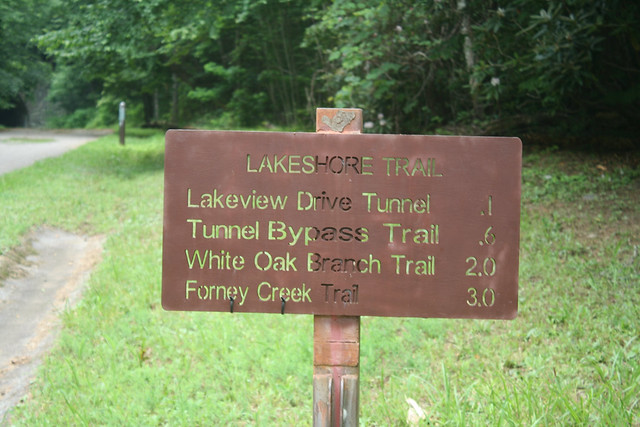 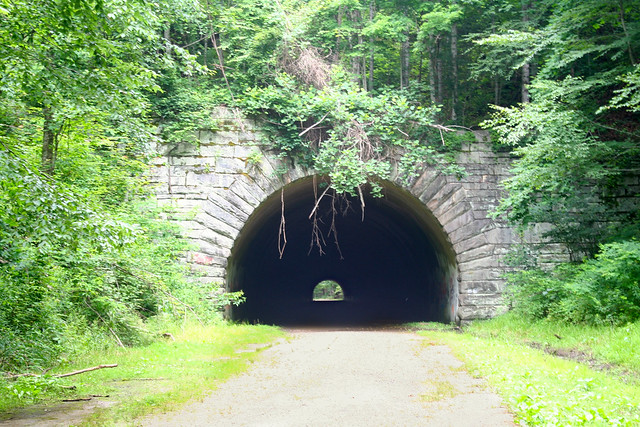 This tunnel is super dark and longer than it looks when you walk up to it. Rob and I both had our iPhones with us and that flash light really did no good. So if you want to see the ground that you’re stepping on, I suggest a high powered flashlight. 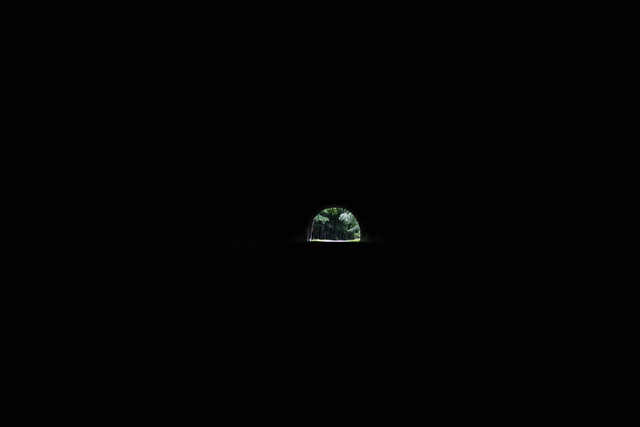 Once we made it to the other side, we decided to continue on for a hike. The volunteer at the visitor center said there were a couple different trails. We forgot the map back at the car, so we were happy to see this sign not far from the end of the tunnel. 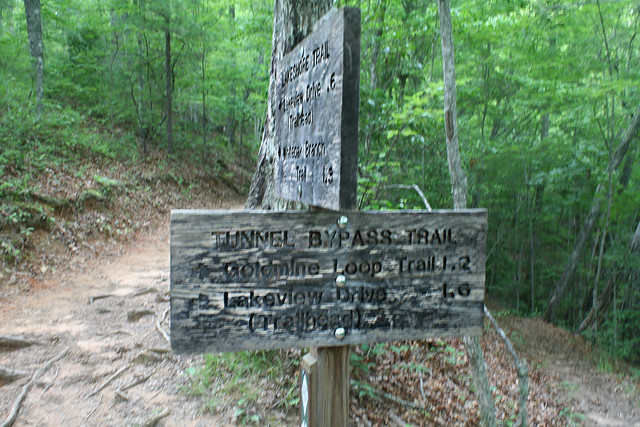 We decided we didn’t need to go down to Fontana lake, because we didn’t want to hike quite that far. So we decided to do the Tunnel Bypass Trail, 1.6 miles. 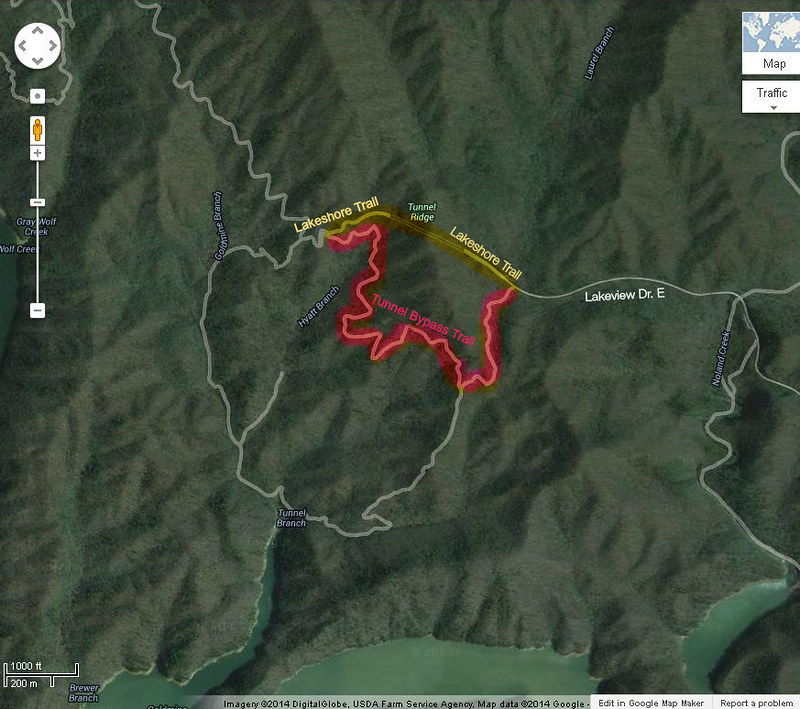 The yellow highlighted trail is from where you park till where we saw the sign with our hiking trail options. The red highlight shows the bypass trail.
Beautiful views and sights of nature along our hike. 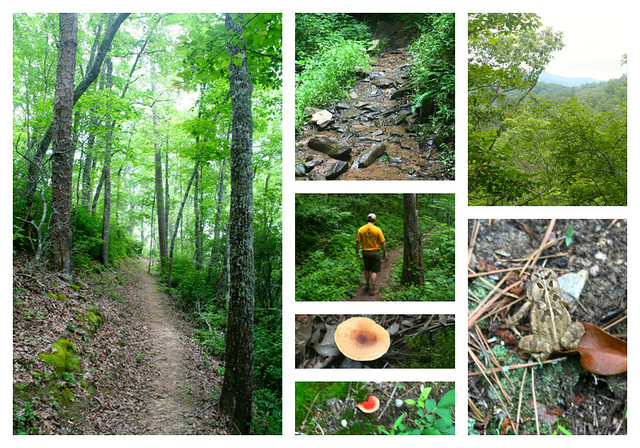 After we left there we wanted to see some falls, so we headed over to Deep Creek Falls. What we didn’t realize is that this is now a huge tourist trap, as you can rent tubes for a nominal fee and tube all day long. We ended up getting the heck outta dodge and decided to come back on a week day next time we’re up this way.

At this point, we were hungry so we went back downtown and had a lovely lunch at The Filling Station. Since it was after the normal lunch period, many of the spots downtown were already closed. 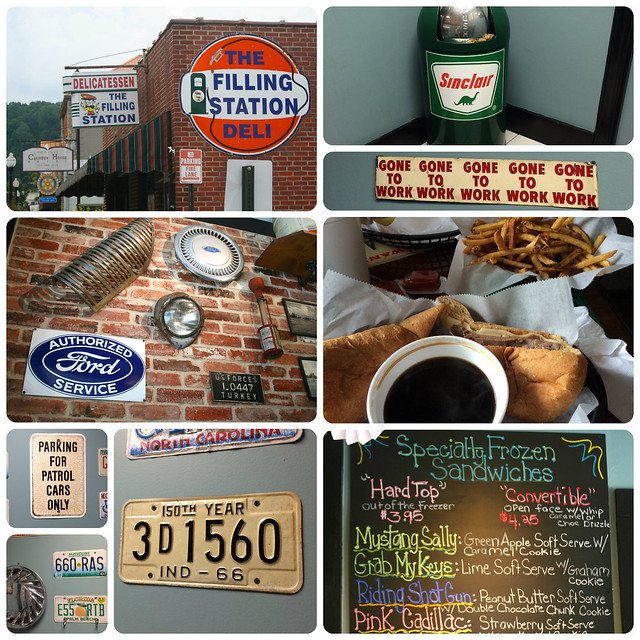 We walked down the street for some dessert at Soda Pops, but beware this is a cash only establishment. We didn’t find this out until we were handed our shakes, so we had to make a quick trip to an ATM. 🙁 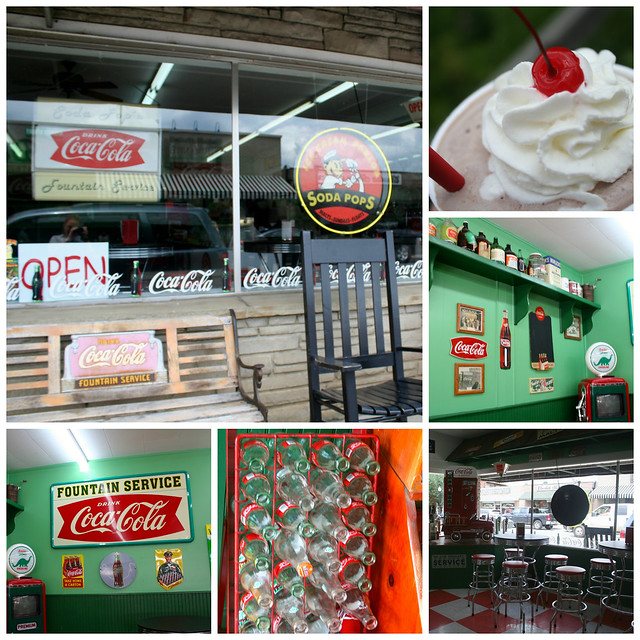 After that we needed to get back to camp, so we took in some more beautiful views on our way back. 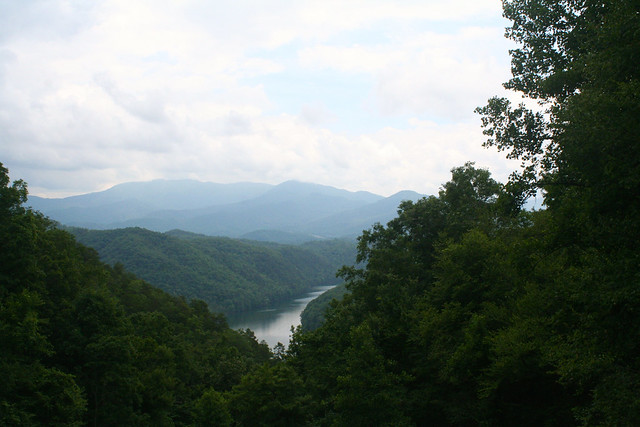 That evening back at camp, I enjoyed some quiet time in the tent just reading, while others chatted and of course, the boys found the mud again. 🙂 Dinner that evening was chicken fajitas and Mexican rice. Who said you can’t eat good while camping?

See all of Day 2 pics here.

Read about our 3rd day here.