Friday morning we got up early, gathered up a few last minute things, and hopped in the car on our way up to the Nantahala National Forrest for our last Cub Scout Summer trip ever. 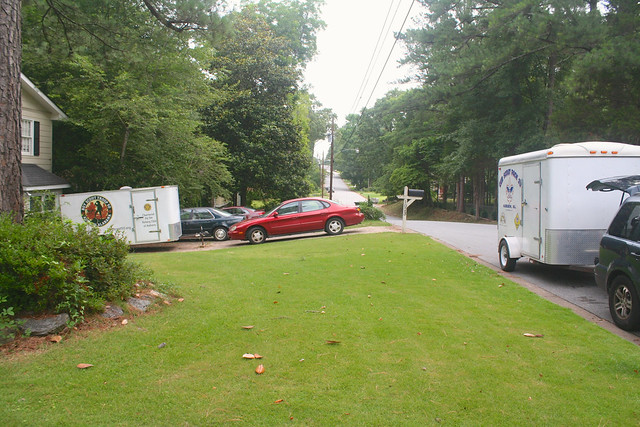 I took this picture before we left. We just recently got a tow package on my Pilot, because Rob has 2 times where he has to pull trailer for scouts. The first time being this last weekend for the cub scouts. The other being next week for the boy scouts. Oh I digress…

So we had an uneventful trip up to North Carolina. We ended up stopping for lunch with our friends who were coming for the cub scout trip as well. They were stopping at Doug’s Cafe for lunch, so we decided to meet them there. When we turned in we decided it would be easier to park in the empty lot across the street. We found it curious that we saw people riding a donkey and horse, which seemed out of place. 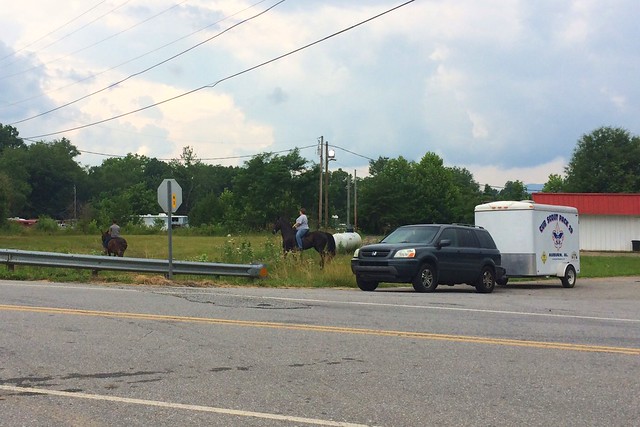 Doug’s ended being a food truck, which I was super excited about that since I’ve been wanting to eat at a food truck. 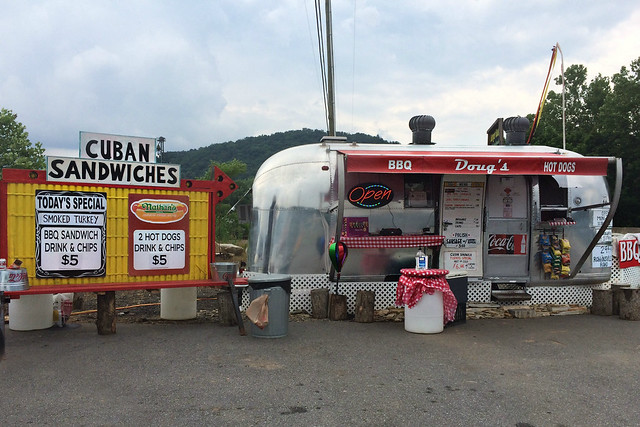 Doug’s offers bar-be-que, Cubans, and hotdogs. All of which is reasonably priced. We all got the $5 deal (bbq sandwich, chips, and a drink).

The had a rock that made for a perfect chair for Alex. 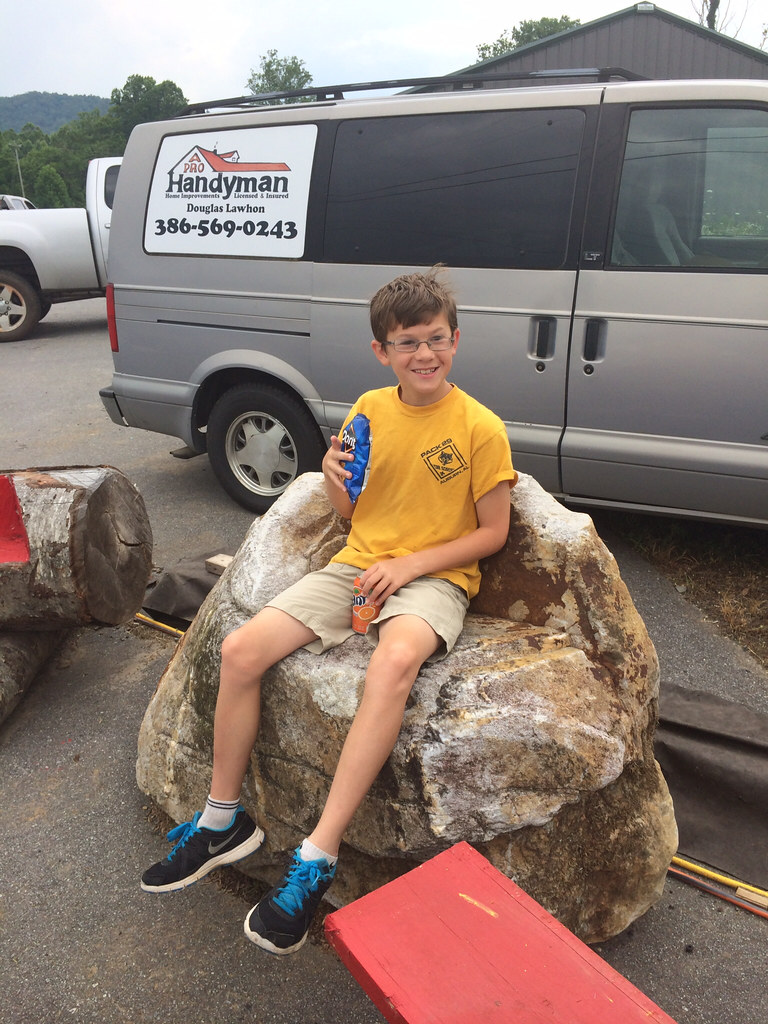 They also had a log carved out for a bench and another bench in front of their marquee sign. As we sat eating, Rob asked the owner, Doug, where they could get fire wood. He ended up giving us some. Then, another guy came by and showed us where we could get more. Then, proceeded to tell us about his rafting and ziplining business if we were interested. As we loaded the trailer with more wood, we saw part of a wagon train arrive back. 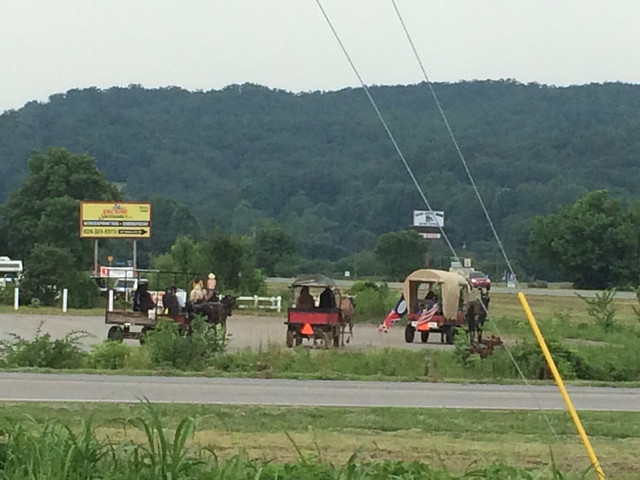 Not long after that, we had another guy come over and inquire about our group. He invited us to come across the street to “look” at the horses, where we were then invited and given a group rate on a rancher’s rodeo Saturday night. We took the information and said we pass it along to the other families. 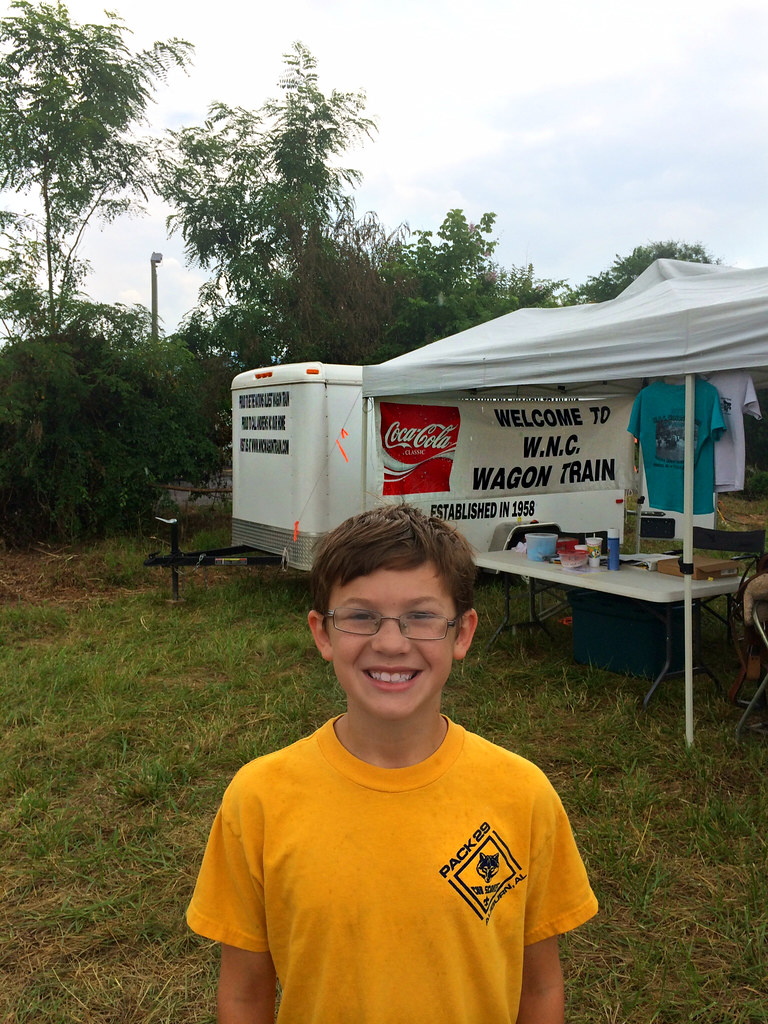 At this point, I know I was “sold out” and ready to get to the campground. 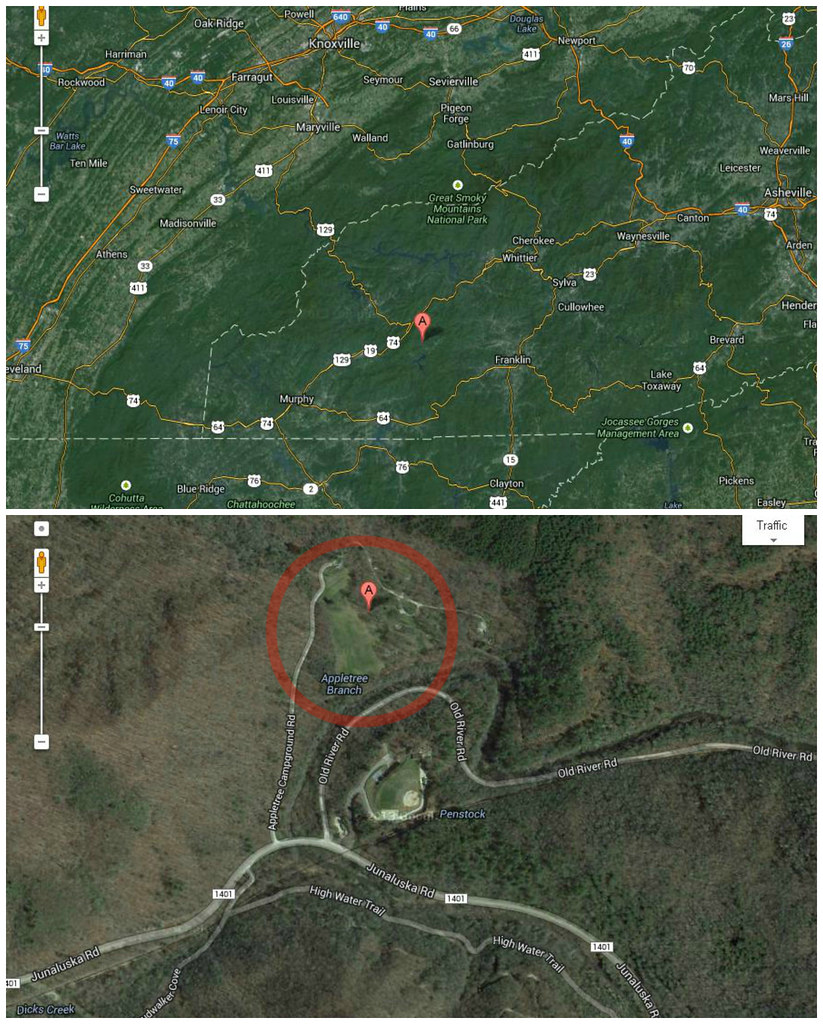 Our cub scouts booked a spot at Appletree Campground, which is designated for groups only. 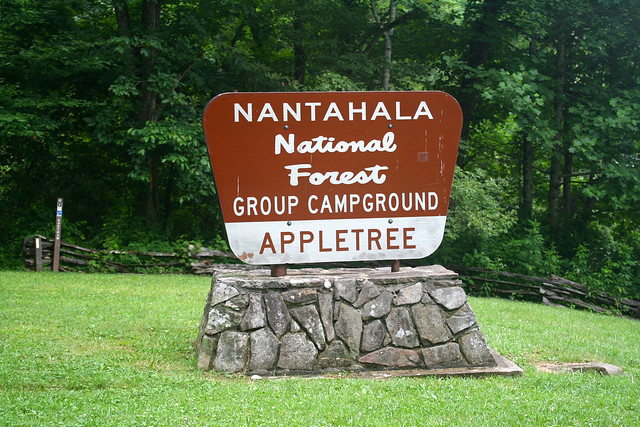 It was a lovely spot that the kids enjoyed immensely. Who said boys are hard to please, drop them off near a creek and they are good for hours upon end.

When we arrived, we were a little concerned as the skies turned overcast, so we started getting everything set up. We were very impressed with the campground as it was quite spacious and beautiful. Our outings chair is awesome! 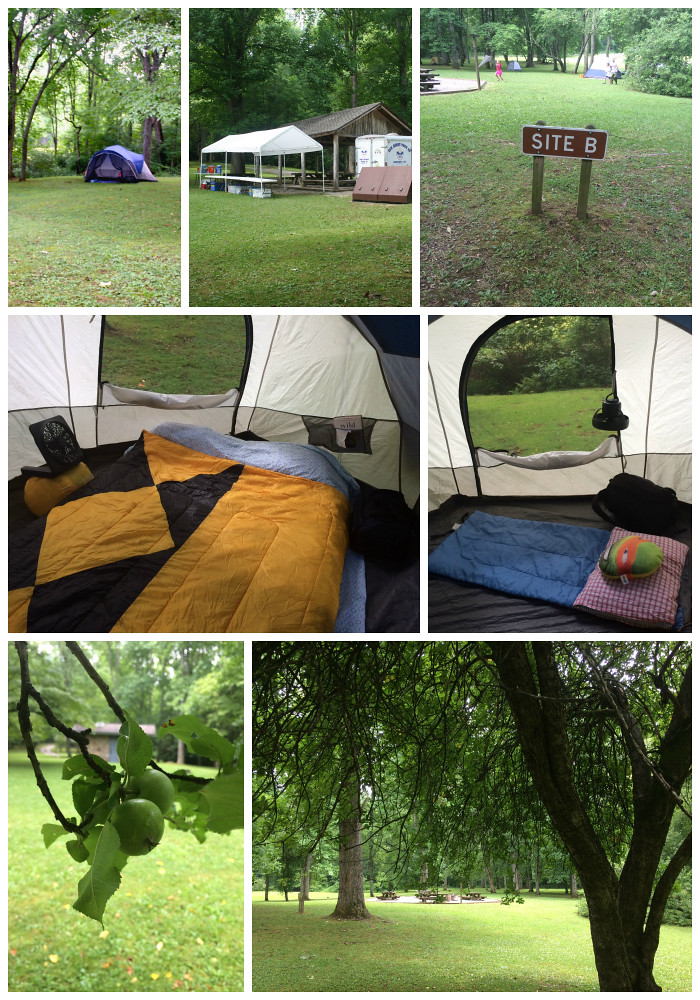 We got lucky and didn’t have any major precipitation. After getting all set up a group of us decided to see if we could find the Nantahala River, which we were told ran right near the campground. 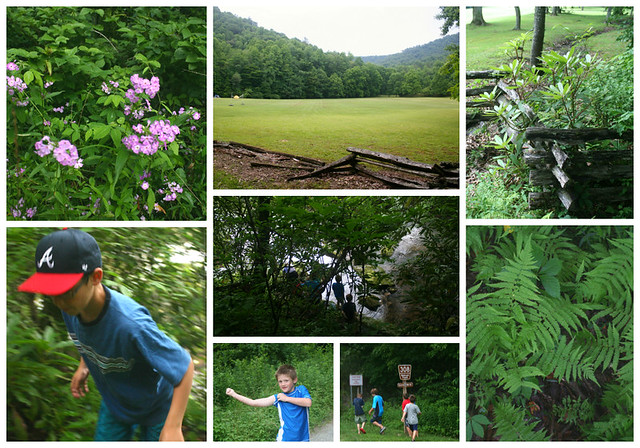 We could hear the river, but we were climbing so we knew we were just getting further from the bank. We ended up seeing it, after traversing a lot of overgrown vegetation. 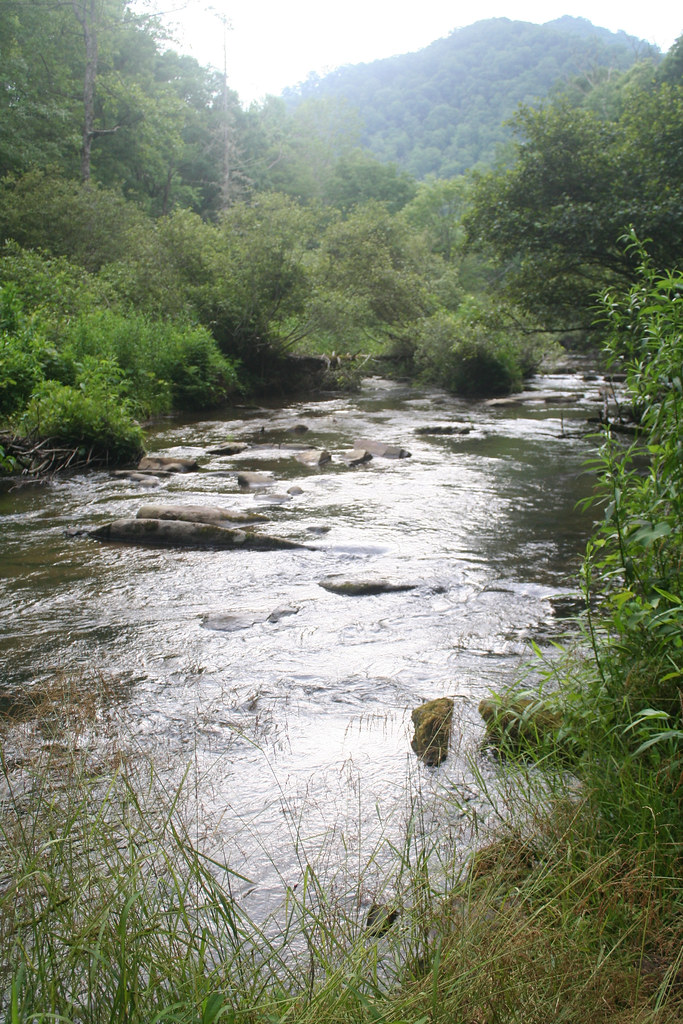 We headed back as it was getting late and we needed to start dinner. The new cubmaster and former cubmaster (Rob) got the fire going over at the fire pit as they shared old and new scout stories. 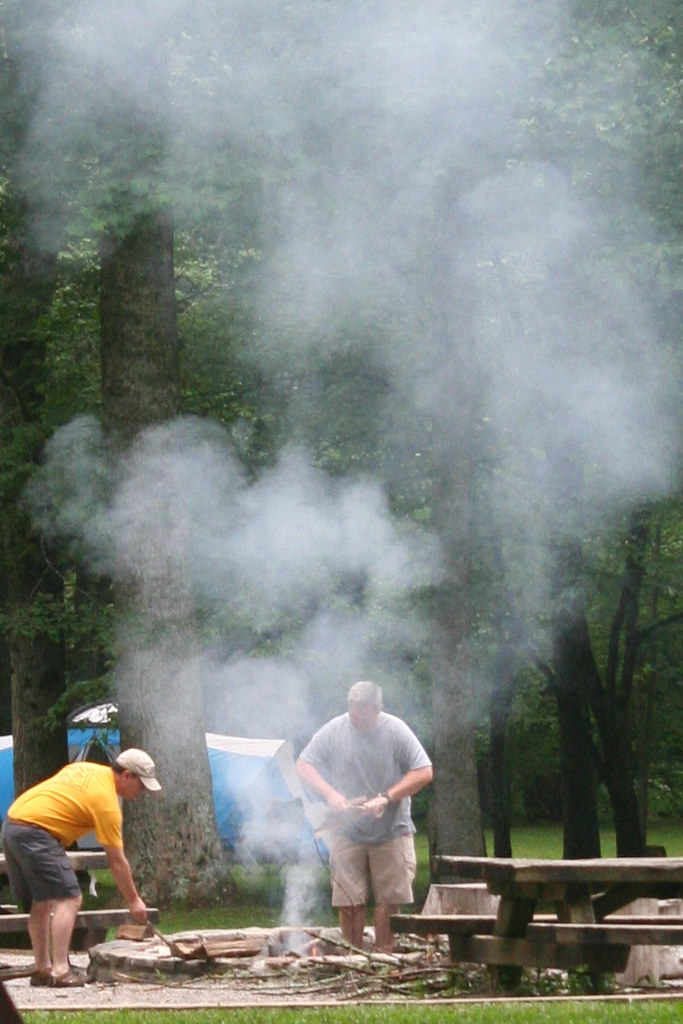 After our dinner of hot dogs, homemade macaroni, and chips, I didn’t waste much time hitting the air mattress in the tent to enjoy my book and the nice cool temperatures.

See all the pics from Day 1 here.

Read about our Day 2 adventures that Rob and I enjoyed in Bryson City here.