Day 2 & 3 of our cruise were days at sea. I probably won’t write about all the sea days. Sometimes trying to figure out how to structure these cruise posts is hard. So much I want to share, but also not wanting to take months writing these posts. We’ll see.

Monday was our 1st day at sea. We slept in and then decided to go to the main dining room for breakfast. I had OJ, Apple Danish, Banana, Pancetta Scramble with grilled sourdough and greens, bacon, and brunch potatoes. 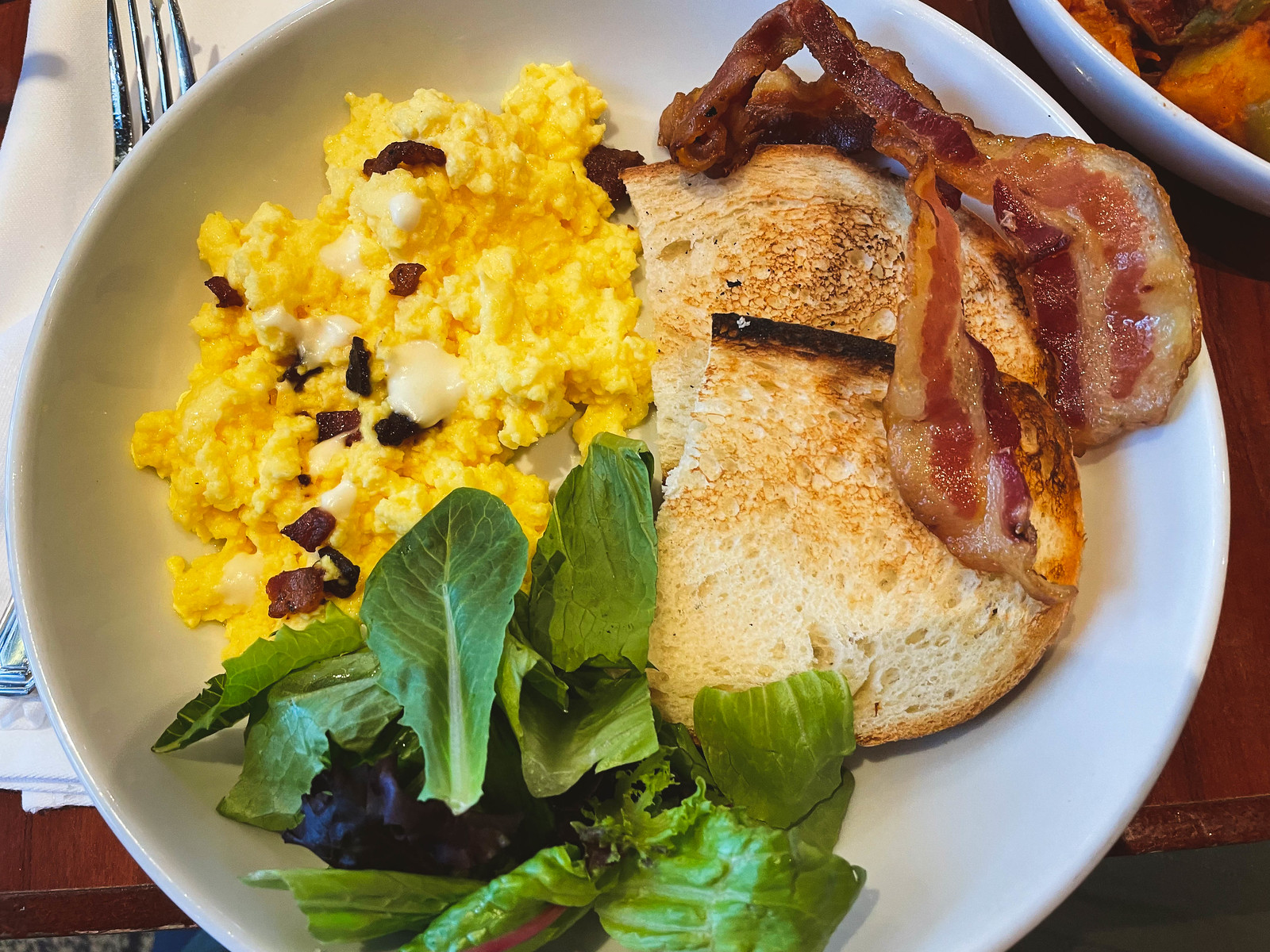 Rob had Apple Danish, Parfait (too nutty) and Eggs Benedict. 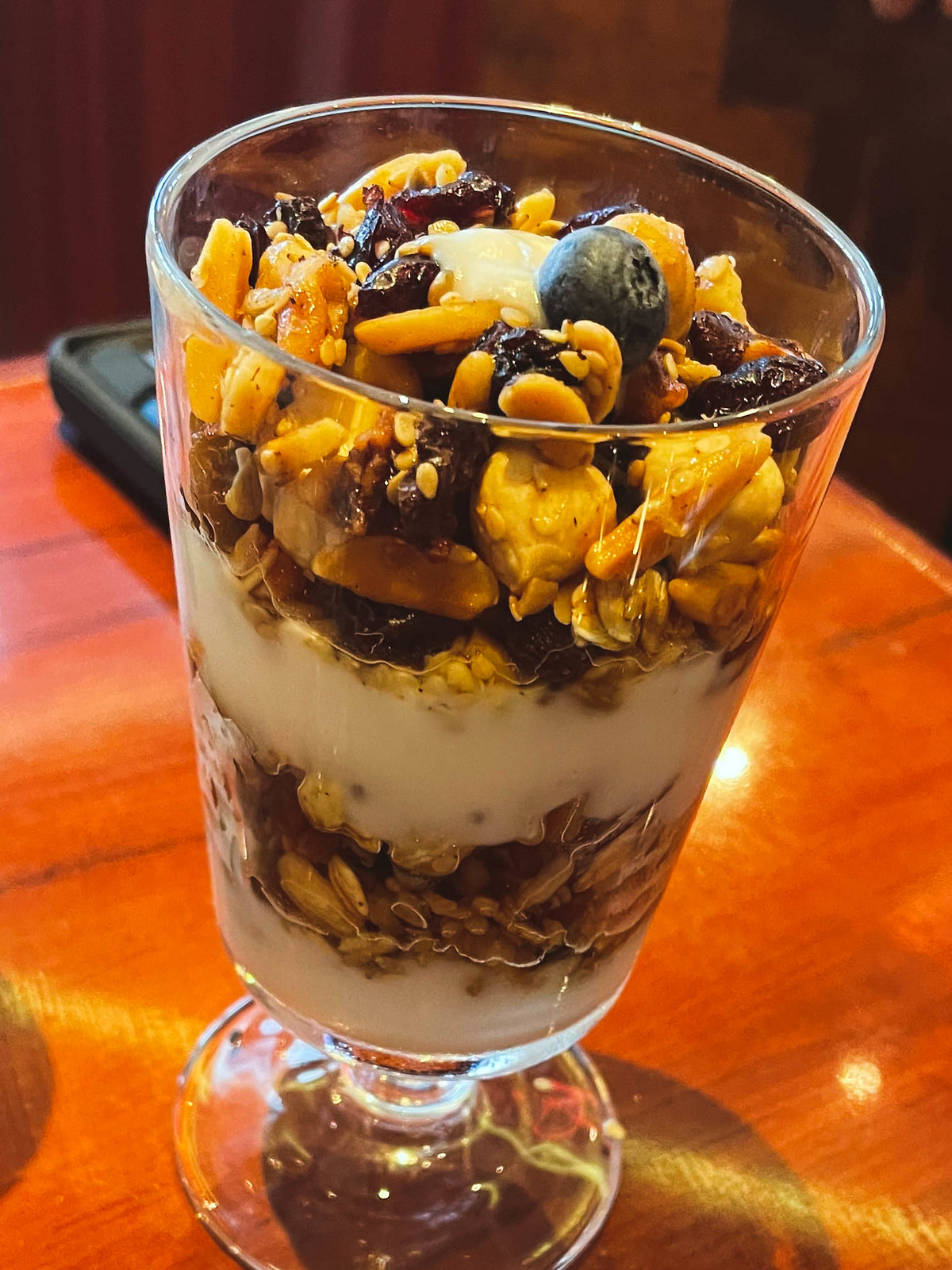 It was actually a rainy day (I think, first ever on a cruise), so Rob and I hung out either inside or outside in covered areas. We noticed the back pool was covered since it was raining. That was pretty cool. 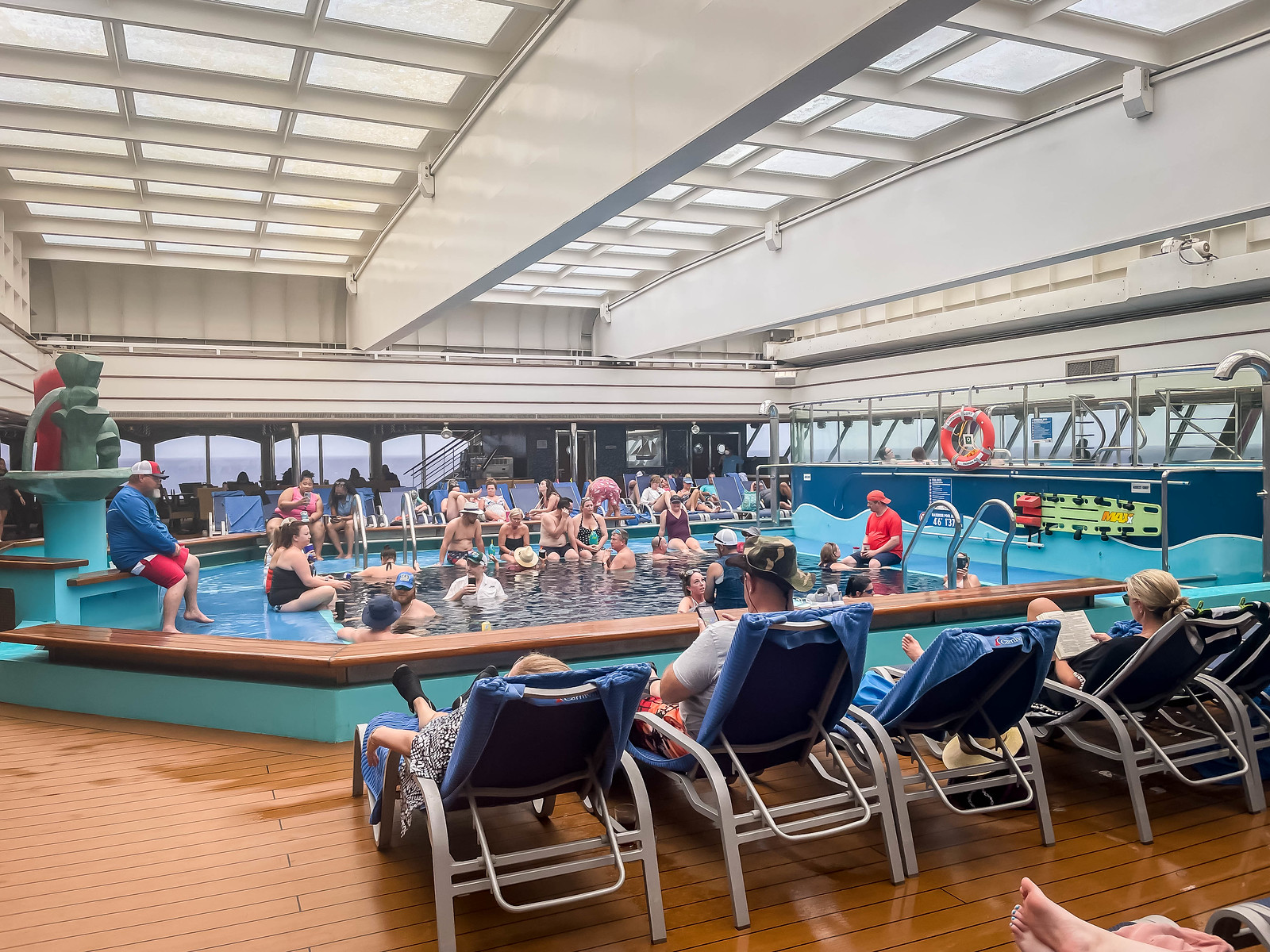 Rainy day equals actually being able to get a lounge chair…haha! 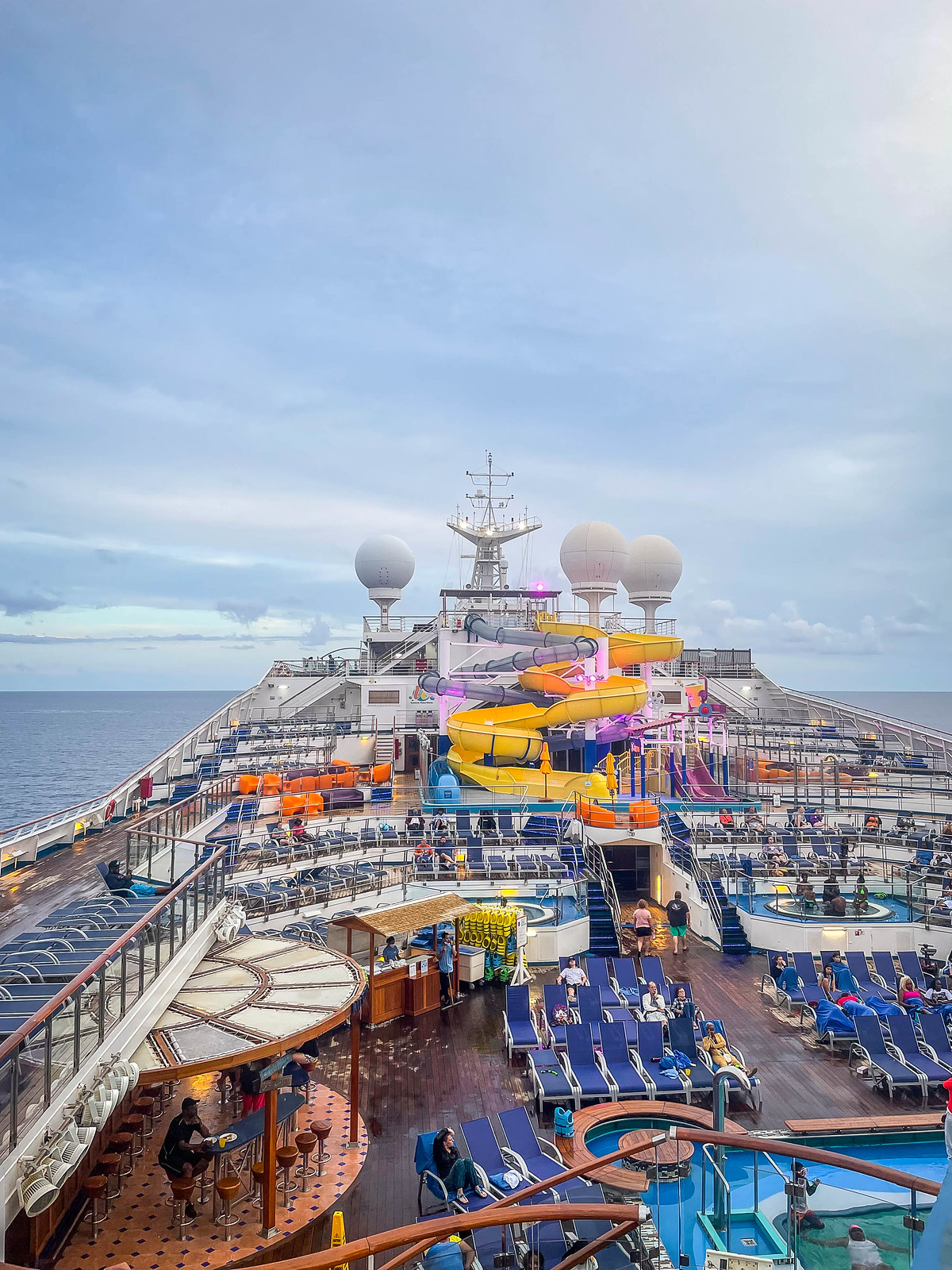 We enjoyed listening to live music the entire cruise. This first day we started to learn just how amazing the talent was on this ship. Bunnyman was one of our favorites! 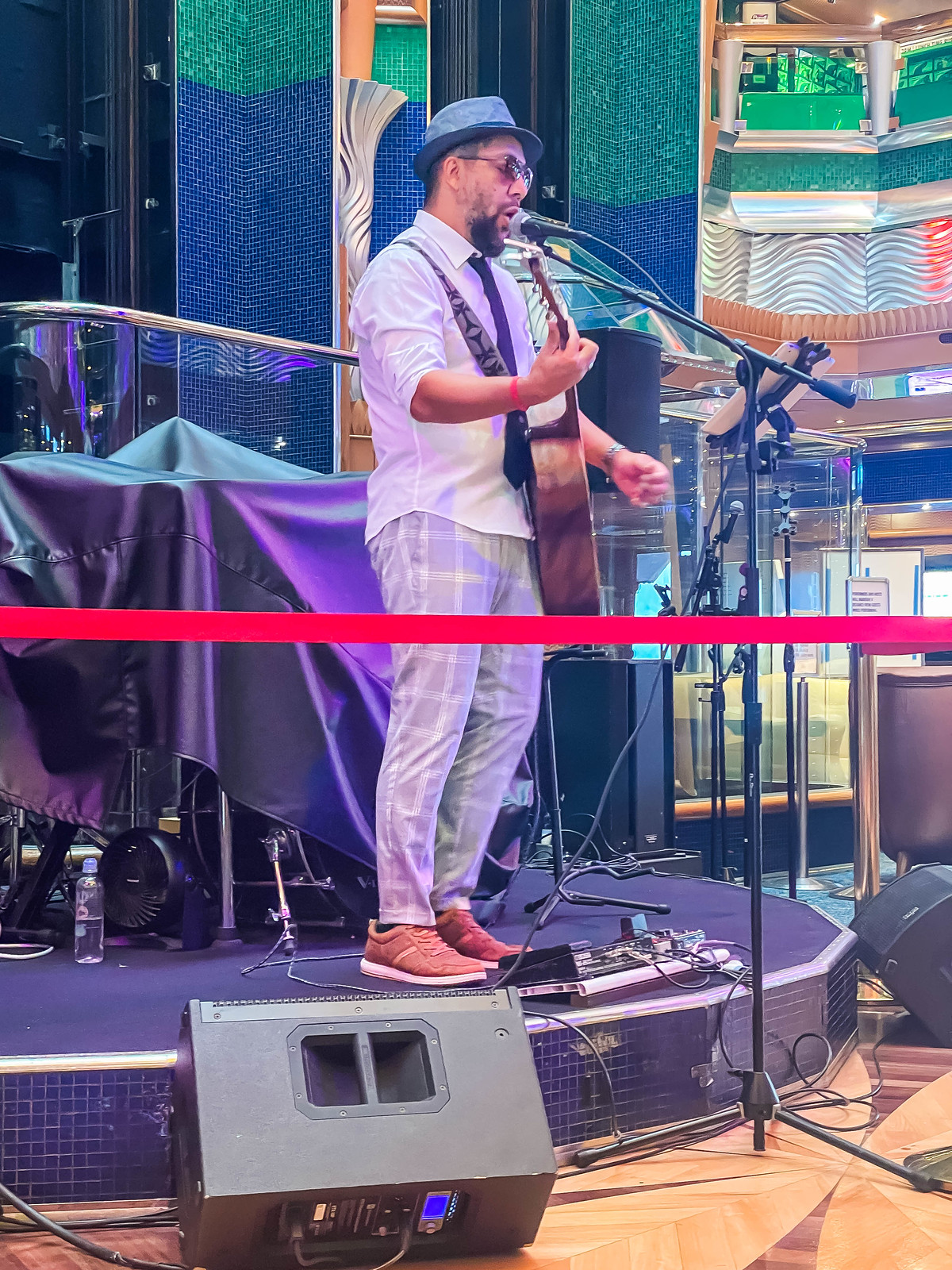 We went to the Excursion talk with the cruise director, Leon. Later, we went to lunch at one of the buffets. I had BBQ, beans, coleslaw, and potato salad. German chocolate cake and ice cream for dessert. 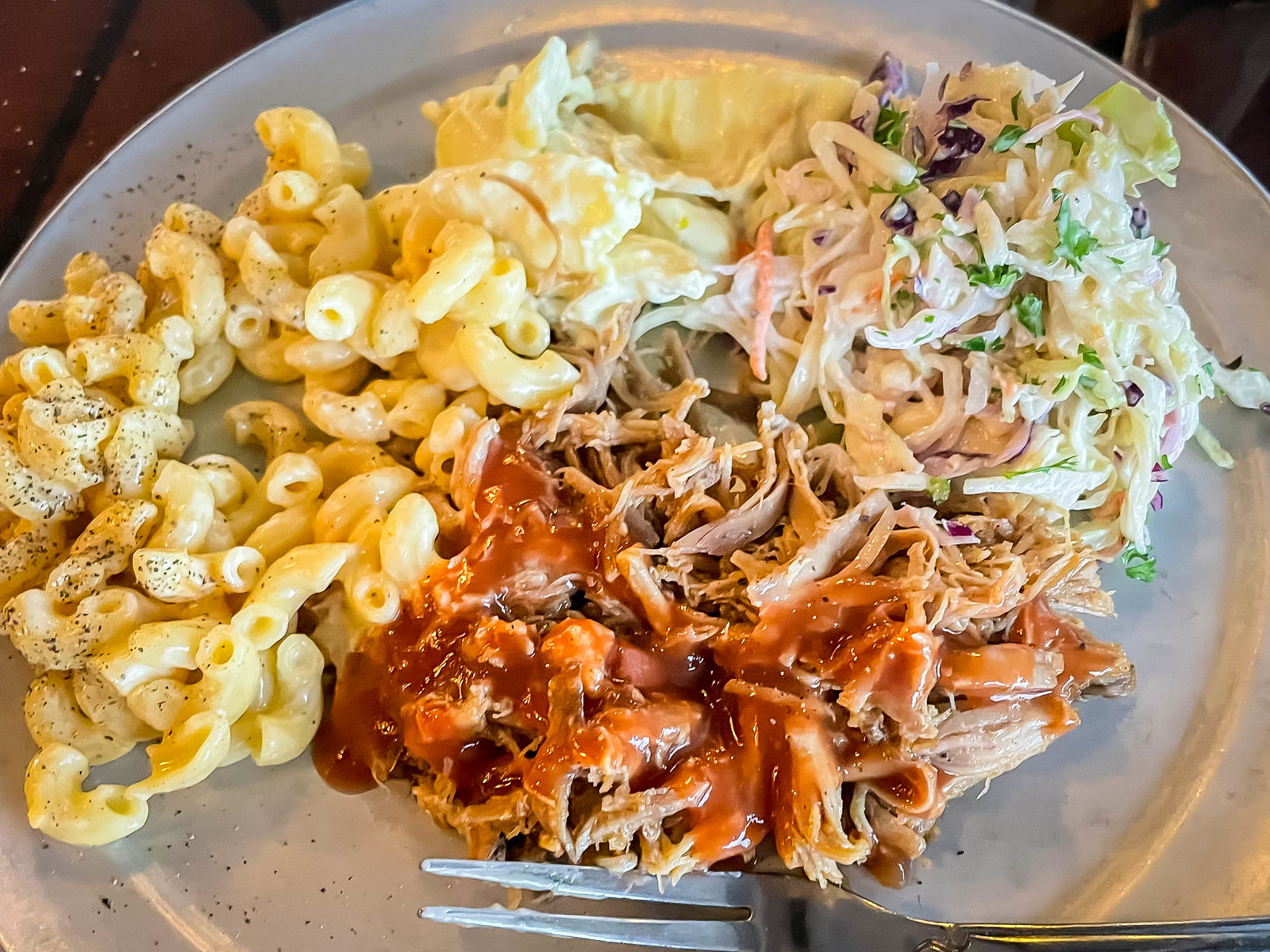 After lunch I went back to the cabin for a nap. Then got up and walked around the ship. Rob and I went to the highest part of the ship. Before we knew it, it was time to get ready for dinner…formal night that night. 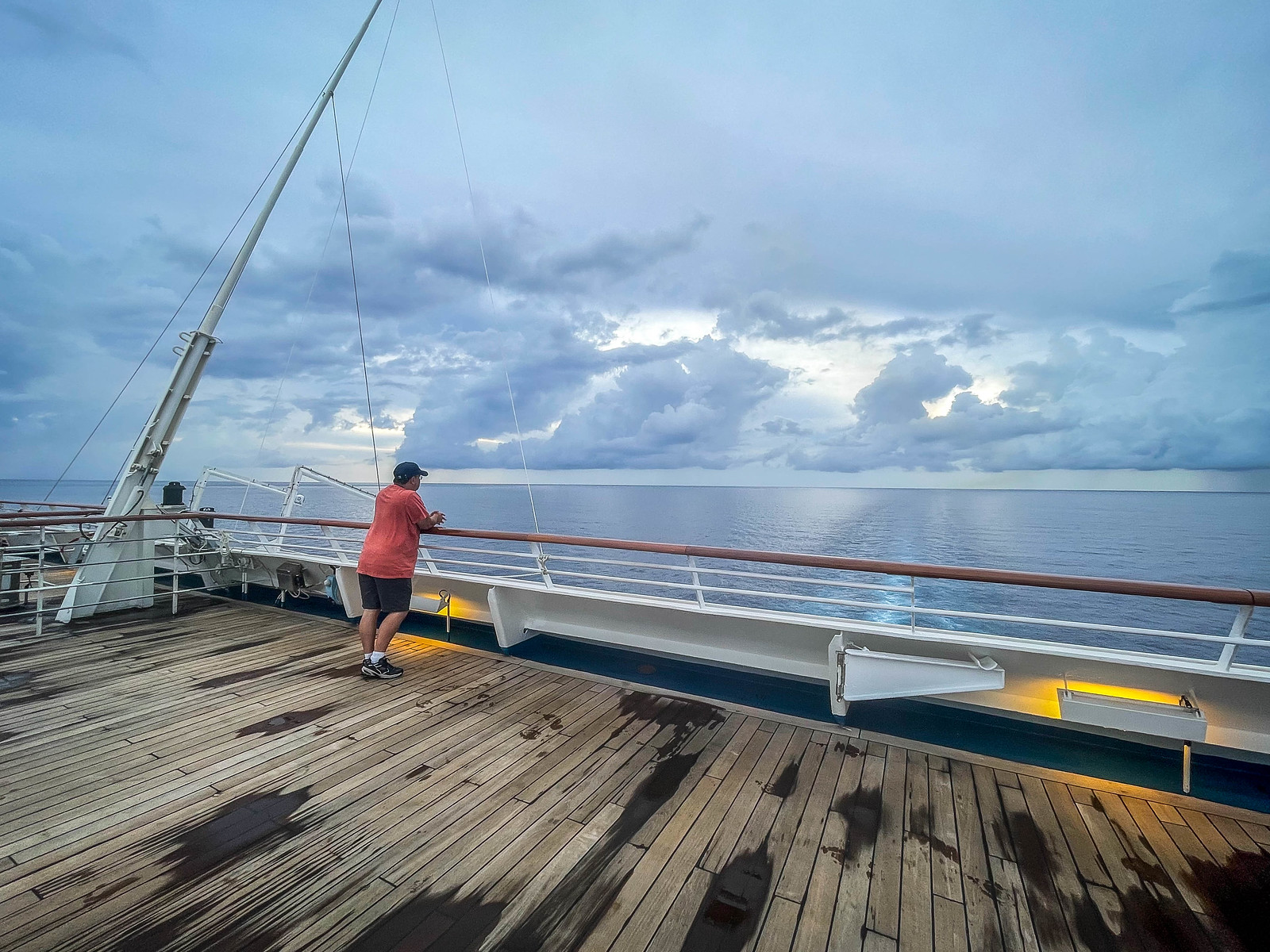 We went to our table and saw a new couple sitting across from where we sat the night before. To our surprise the guy had an auburn shirt on! And that just made me feel comfortable, after having such an awkward first night at dinner. Service at dinner that night was really terrible and slow. We were there over 2 hours. 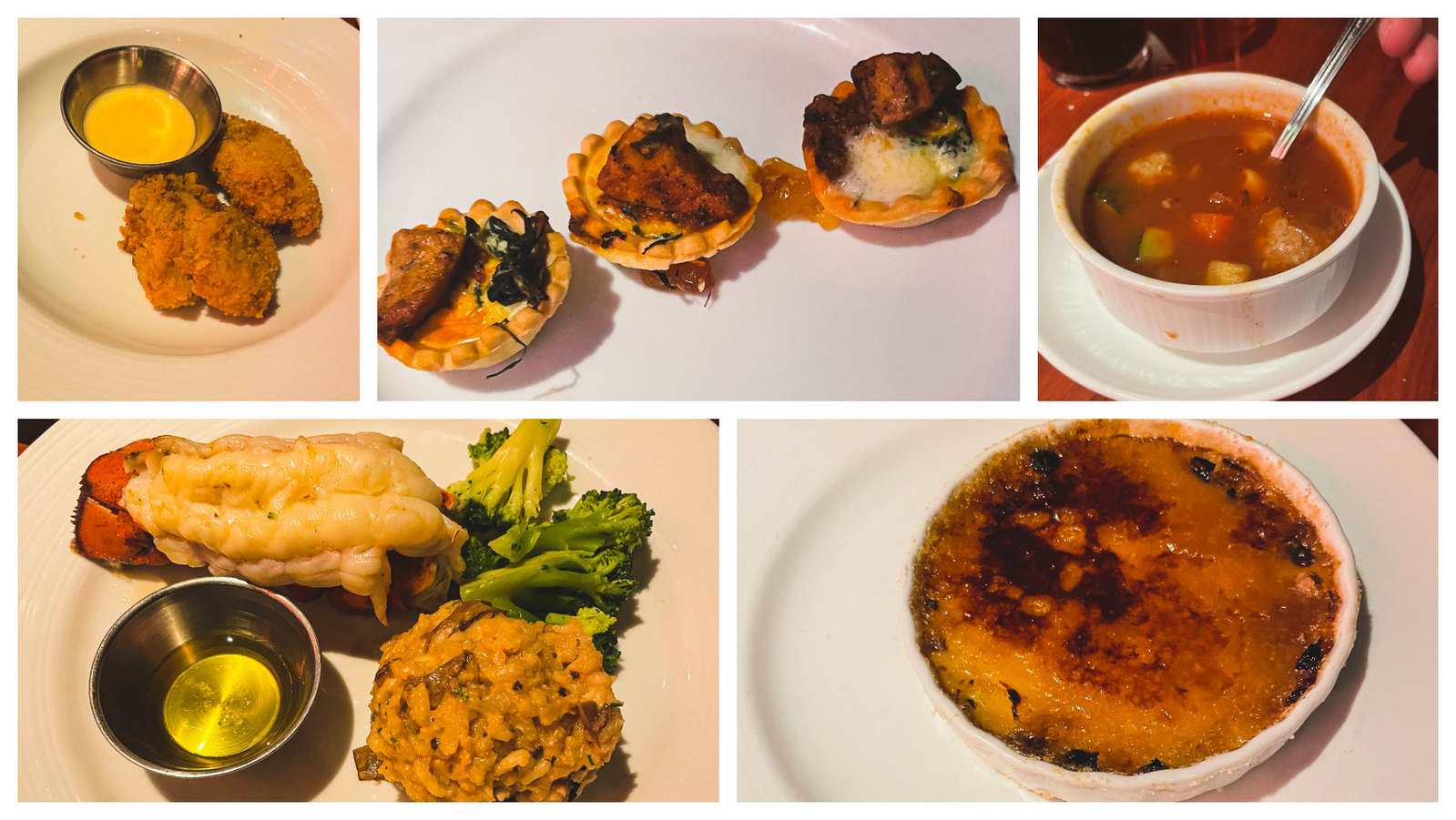 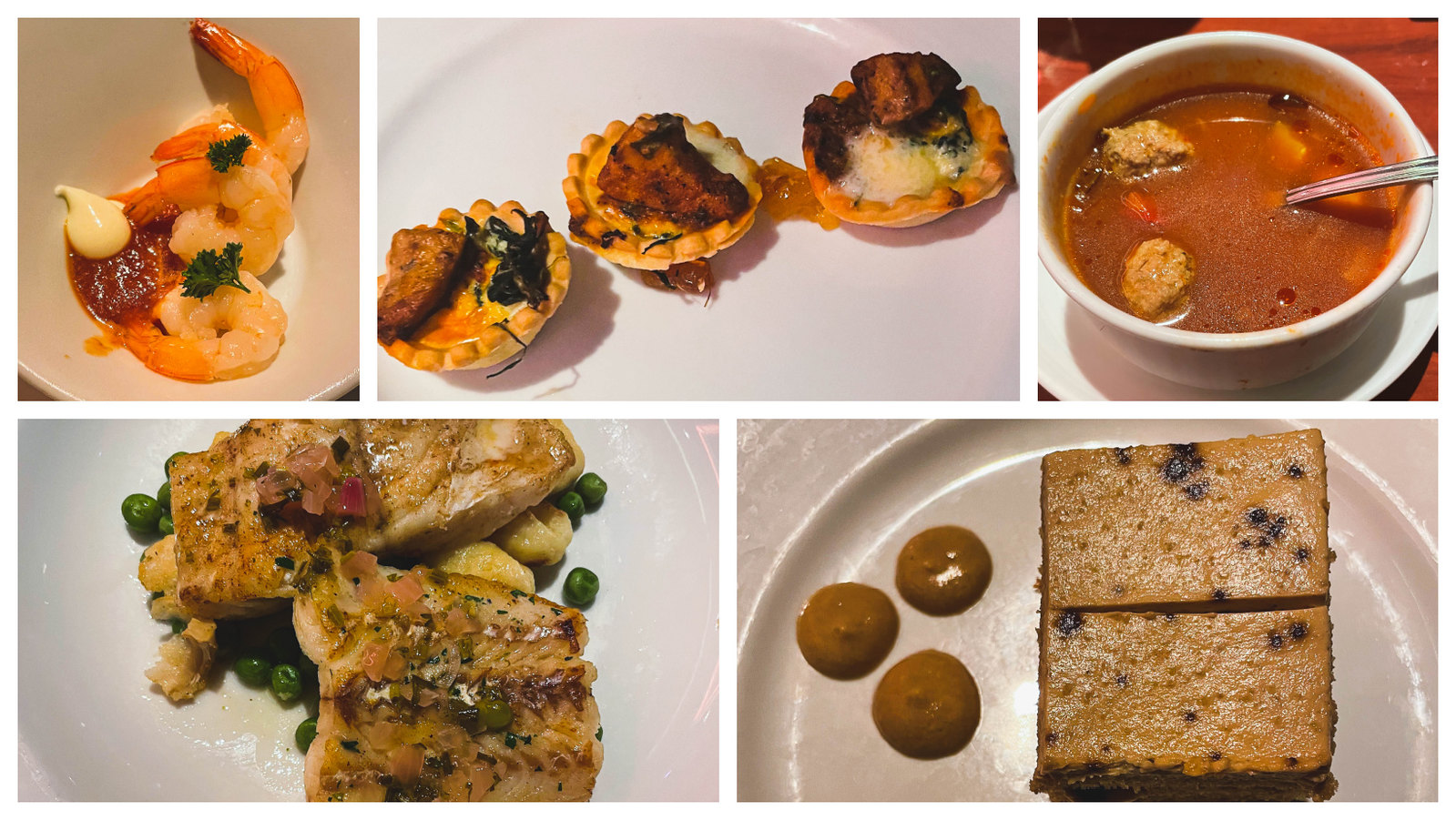 After dinner we went to the Punchliner Comedy Club to see Christina Walkinshaw, who I thought was funny. However, she is quite vulgar. This was the R rated show. Rob could have done without it for sure. 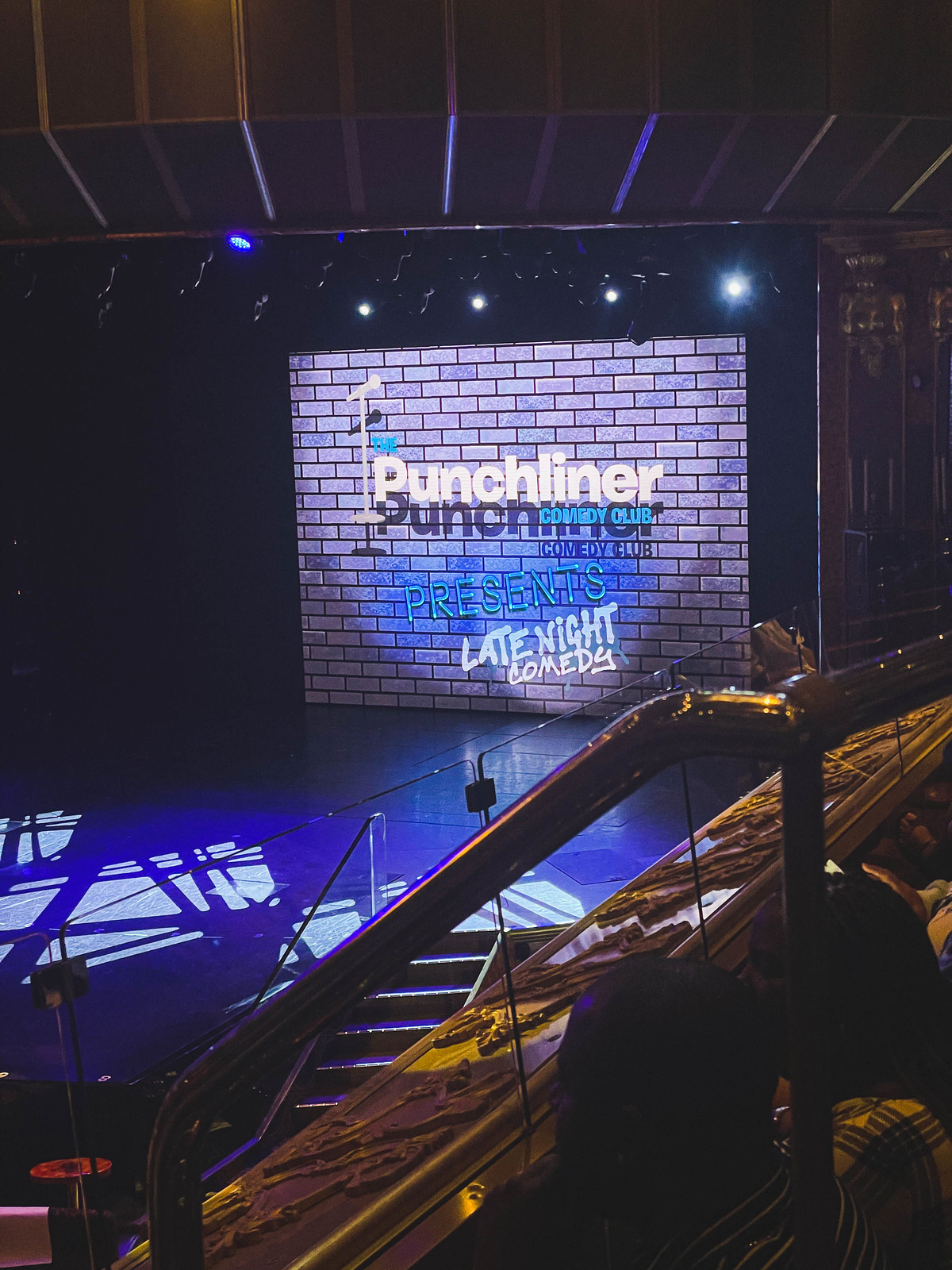 Then, we checked out the Piano bar with Gilbert. The piano bar is usually a favorite of ours. Rob was really wanting a drink, but the service was terrible and after waiting a good amount of time we left and went to the atrium bar. 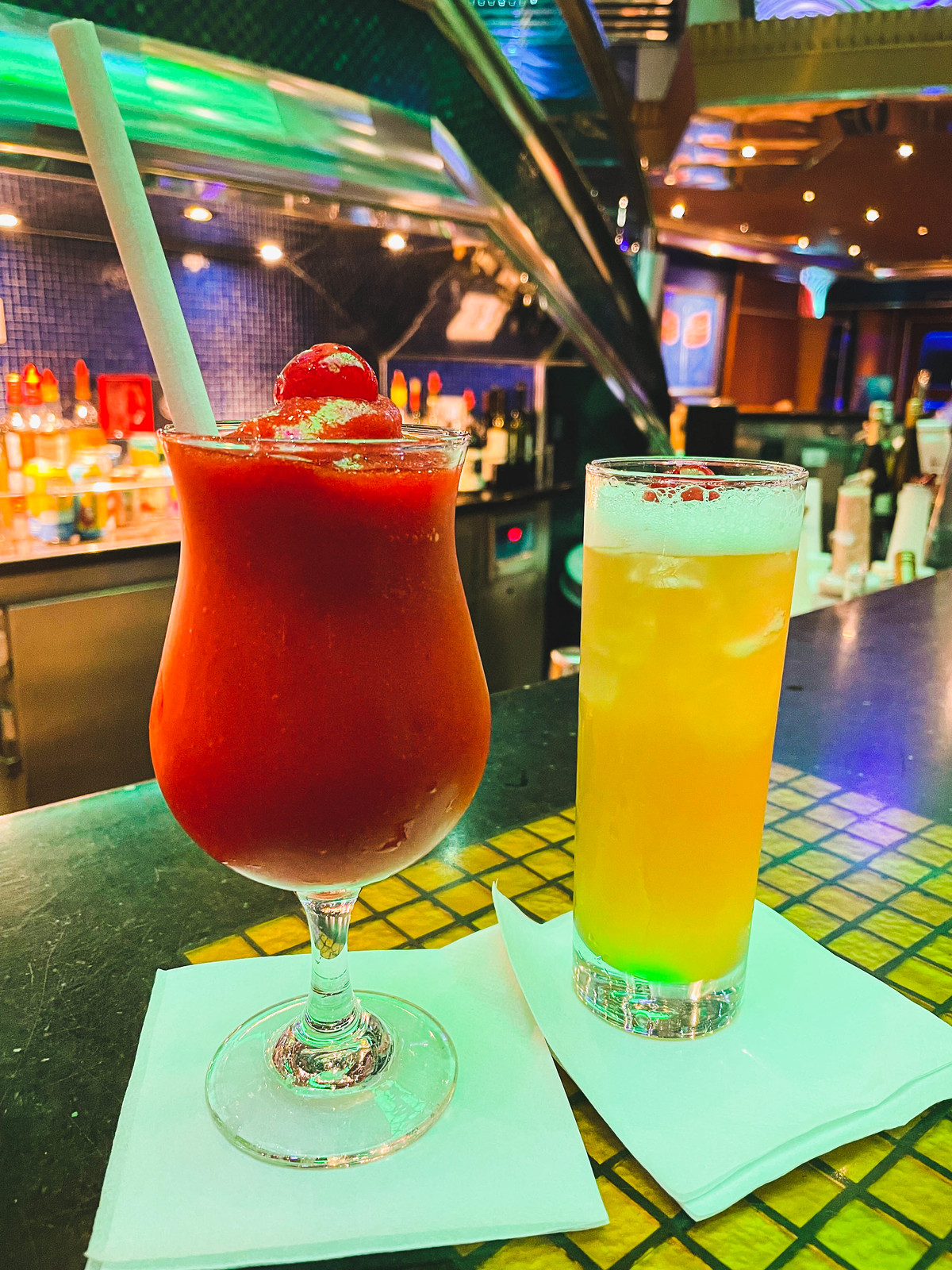 Tuesday was another sea day. We ended up going back to the main dining room. This was my view from my seat. 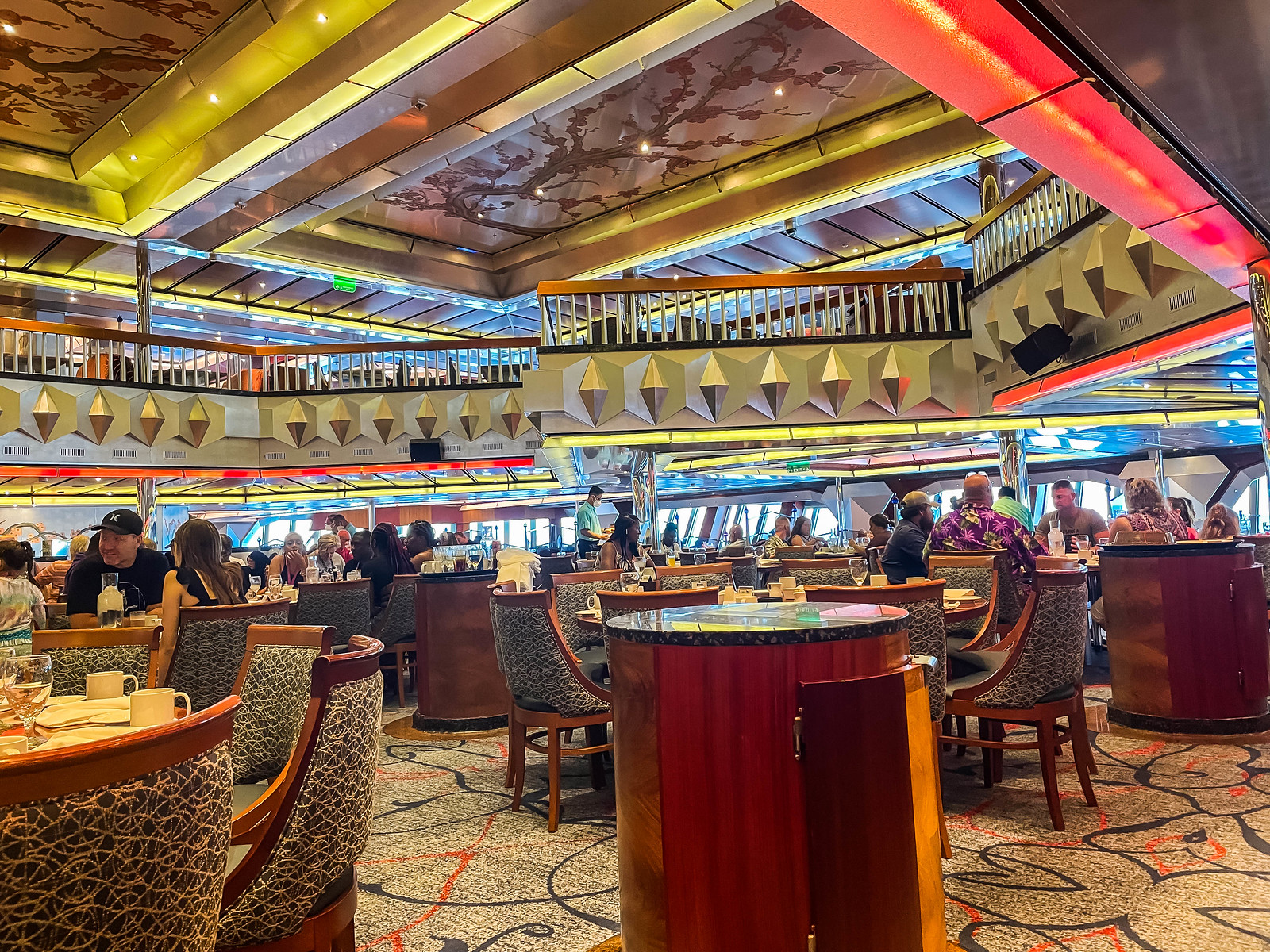 The one thing about knowing you’re on a ship for 2 weeks, we felt like we didn’t have to be in such a hurry to do all the things. This was a good thing because the service on this ship for the most part was sub-par. 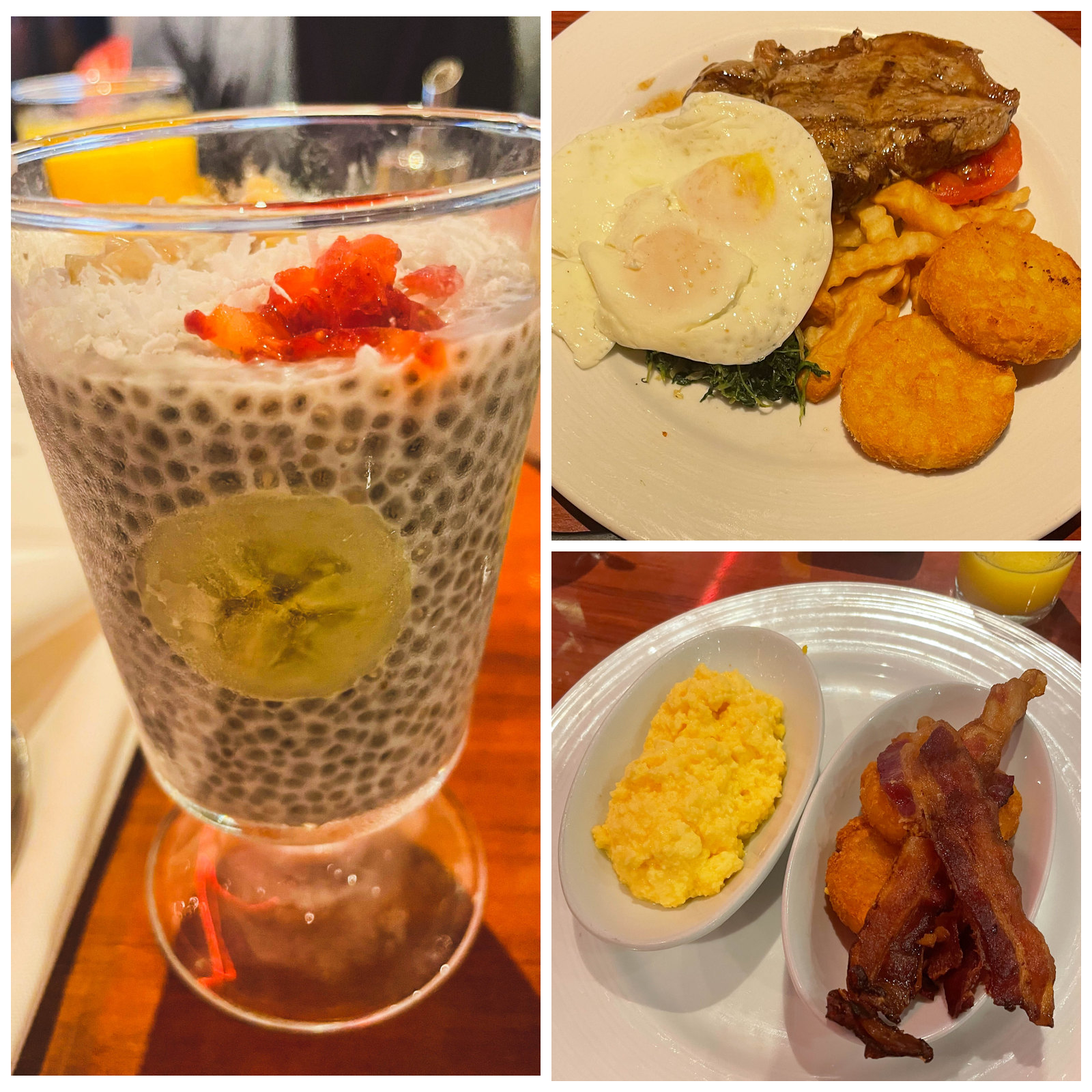 We sat on deck sunning, but it was pretty windy in the area where we were. We were happy that weather was back to being beautiful and no more rain. 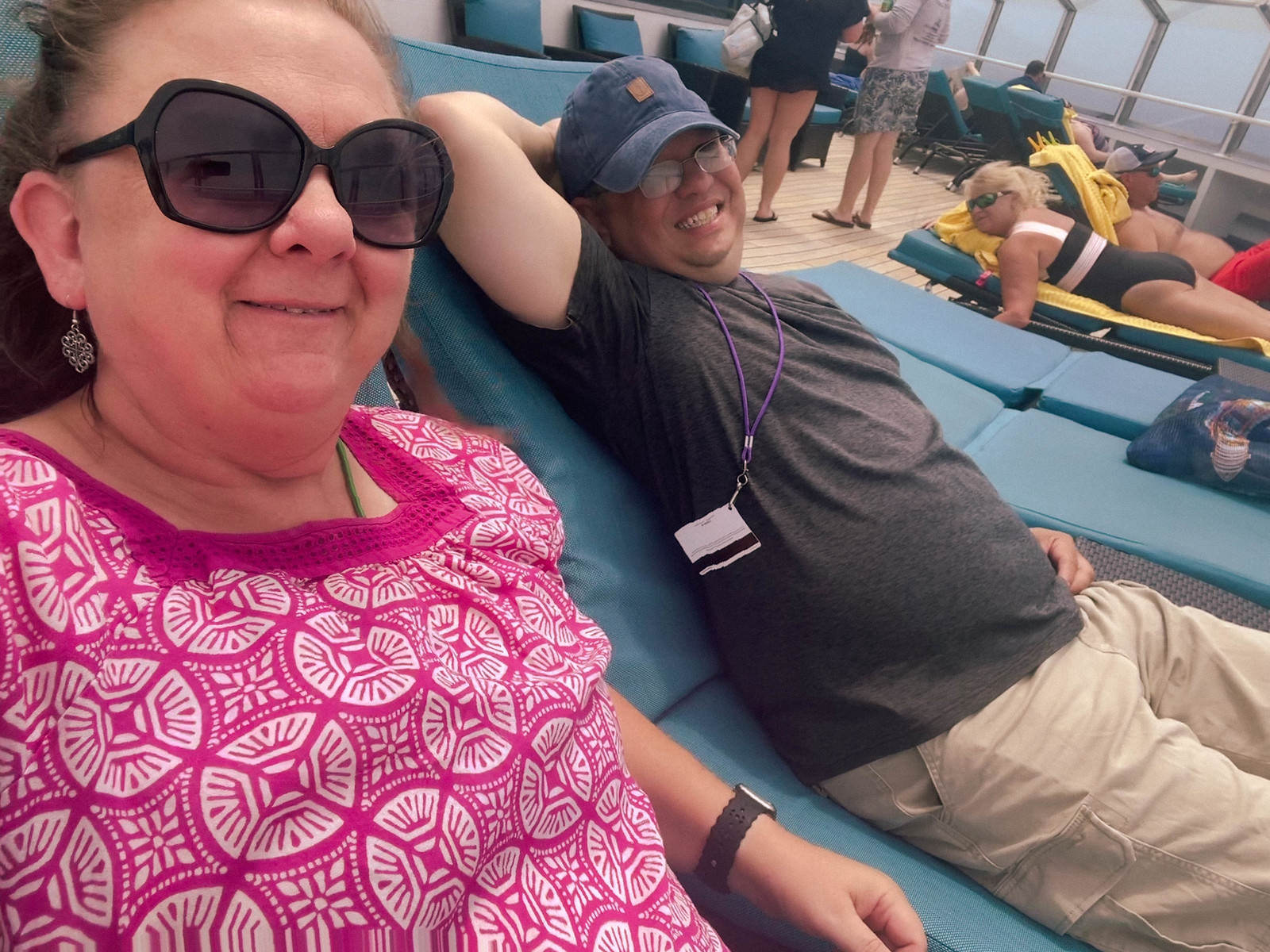 At some point that morning, we went back to the cabin to be greeted by our towel animal. A cruise isn’t complete without this everyday. I think this is our first cruise where our room steward left the animal in the morning. They don’t clean cabins twice like they used. 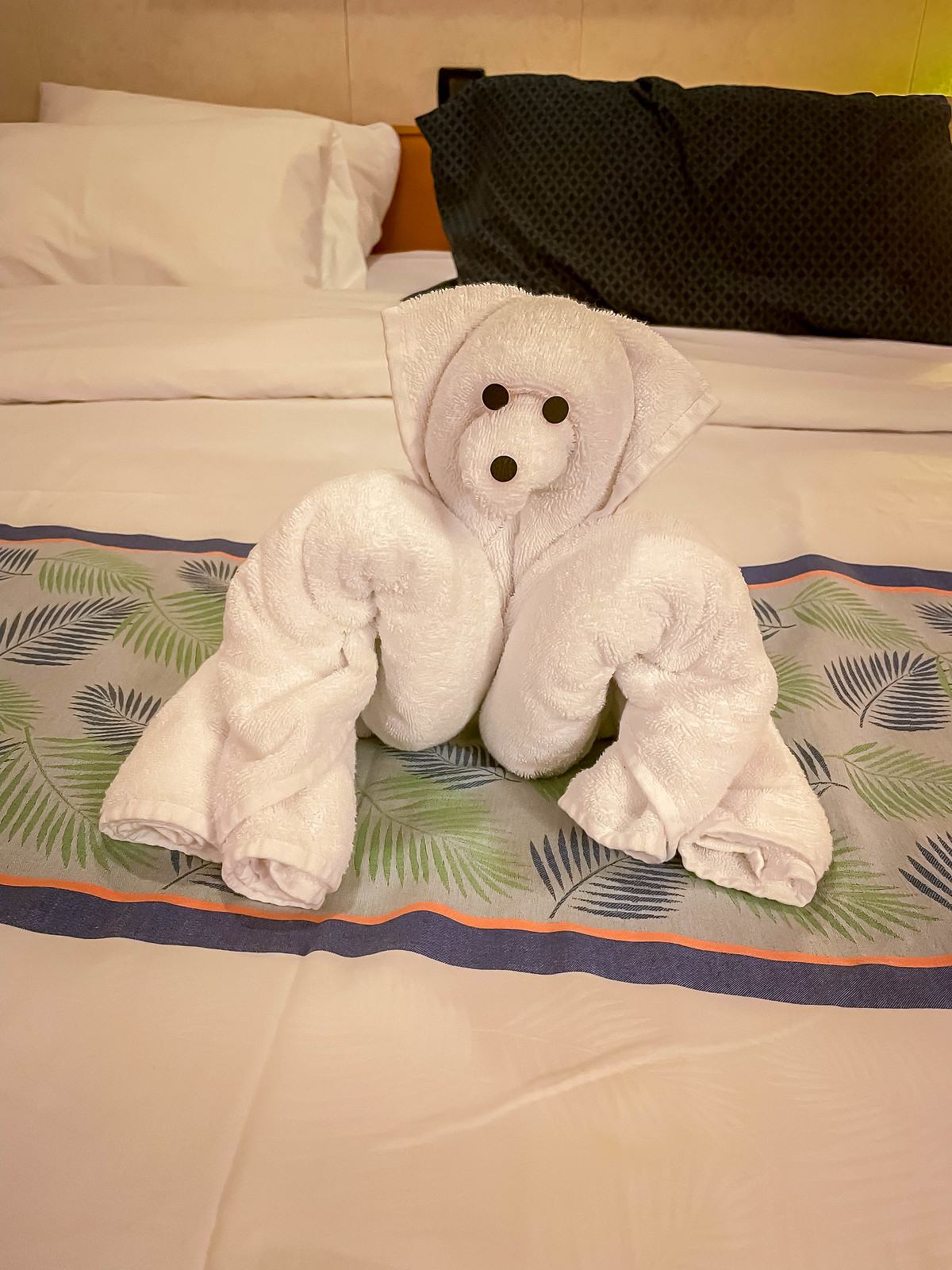 We did some shopping and watched Broadway Trivia, Reverse Charades, and Superhero Trivia in the Atrium

For lunch, I had a Guy’s burger and fries and Ice cream (of course!). Rob had Nashville chicken and Pizza and Ice cream. 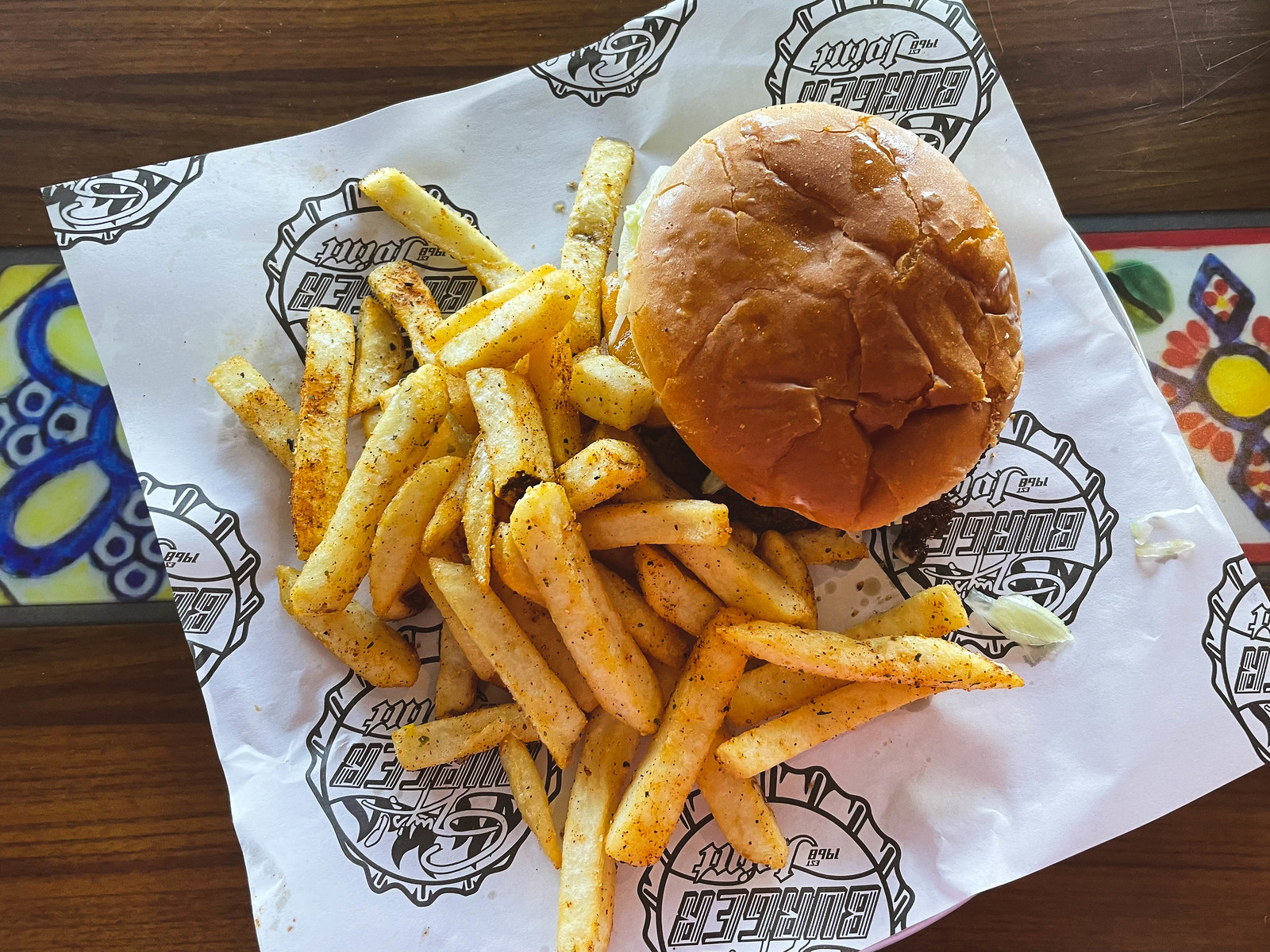 After lunch, I ended up with a migraine so I was back in the room most of the afternoon and evening until the show and dinner. Rob enjoyed himself by taking a swim and sitting on deck listening to steel drums.

Actually before dinner we decided to try to go to the show before dinner since dinner has been taking so long, and we were missing it. We ended up having to leave a little before the show was over to get to dinner on time. 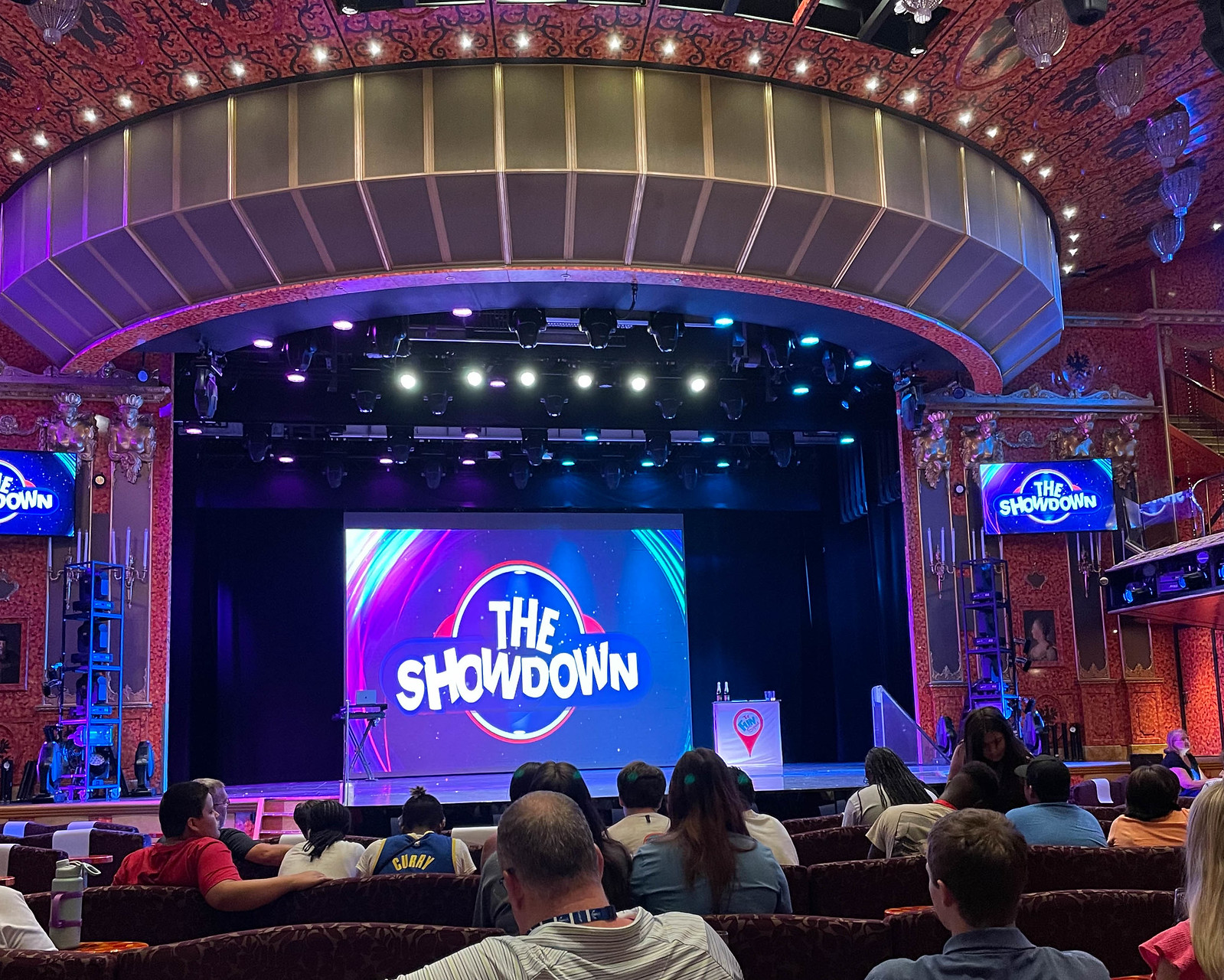 Service at dinner this night was quite a bit better. That night it was just Bryan and Jackie (the Auburn folks). And because I know yall are dying to know what we ate…haha! 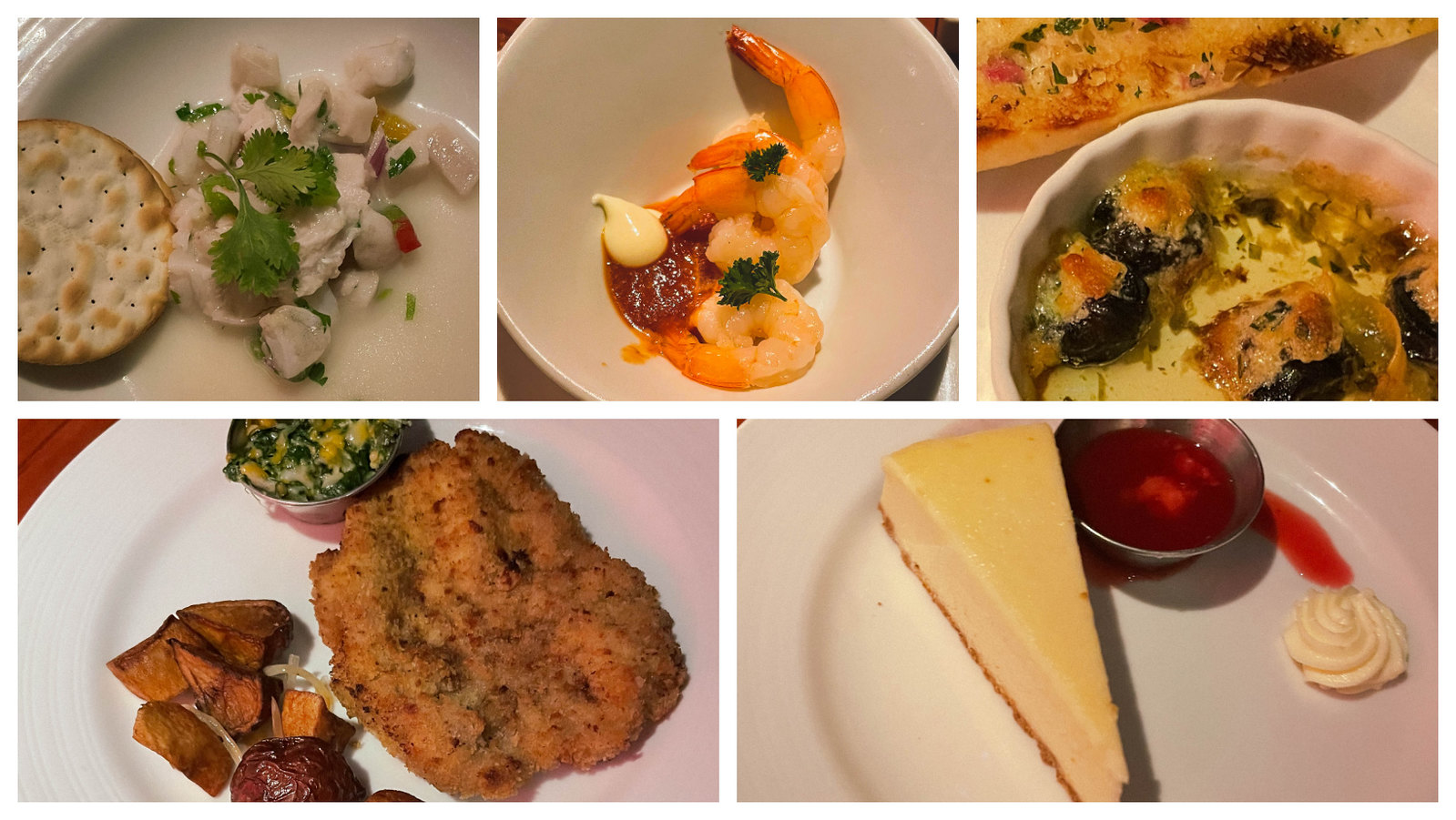 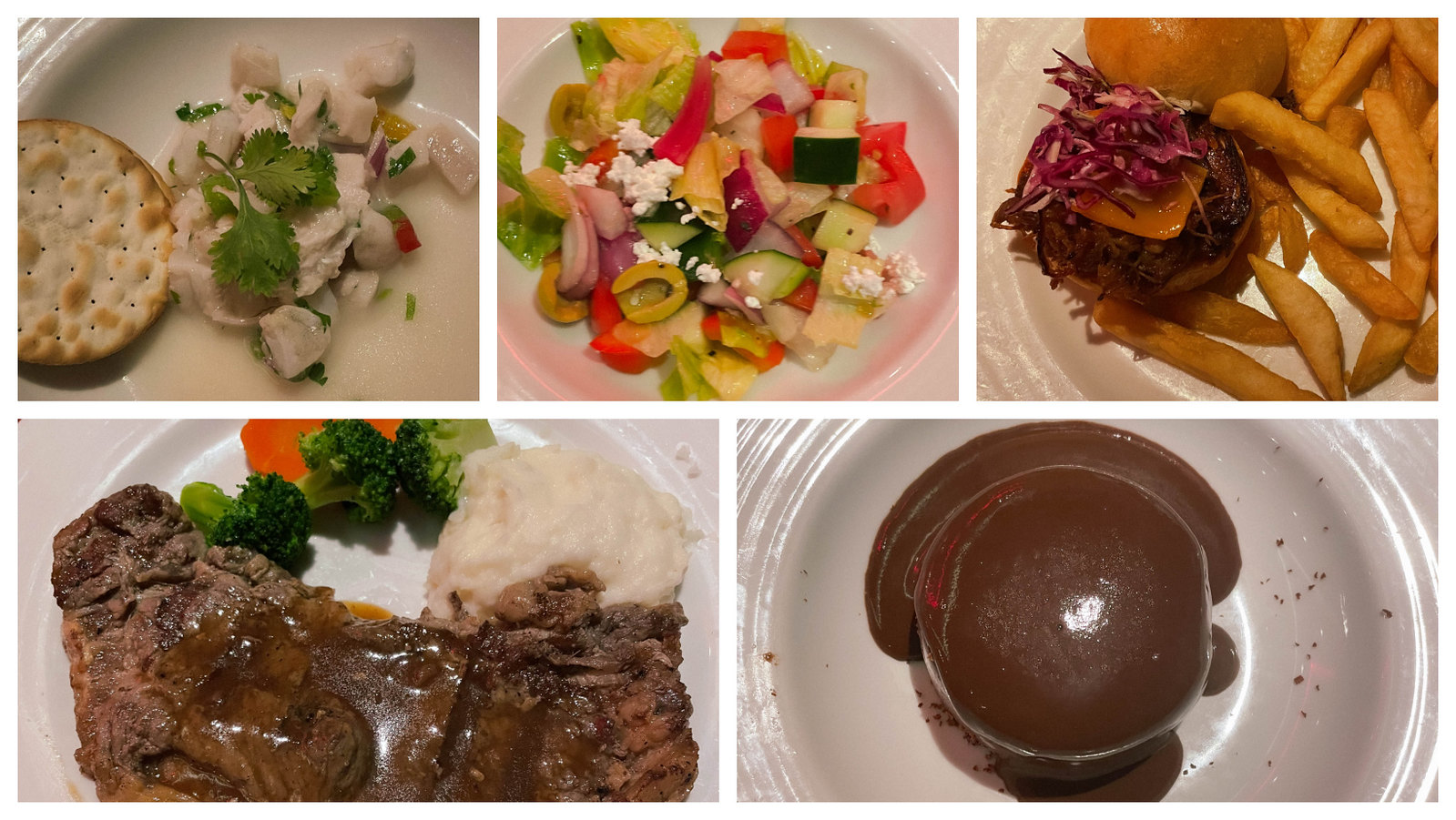 They had these elf looking chairs and we had to get pics in them. 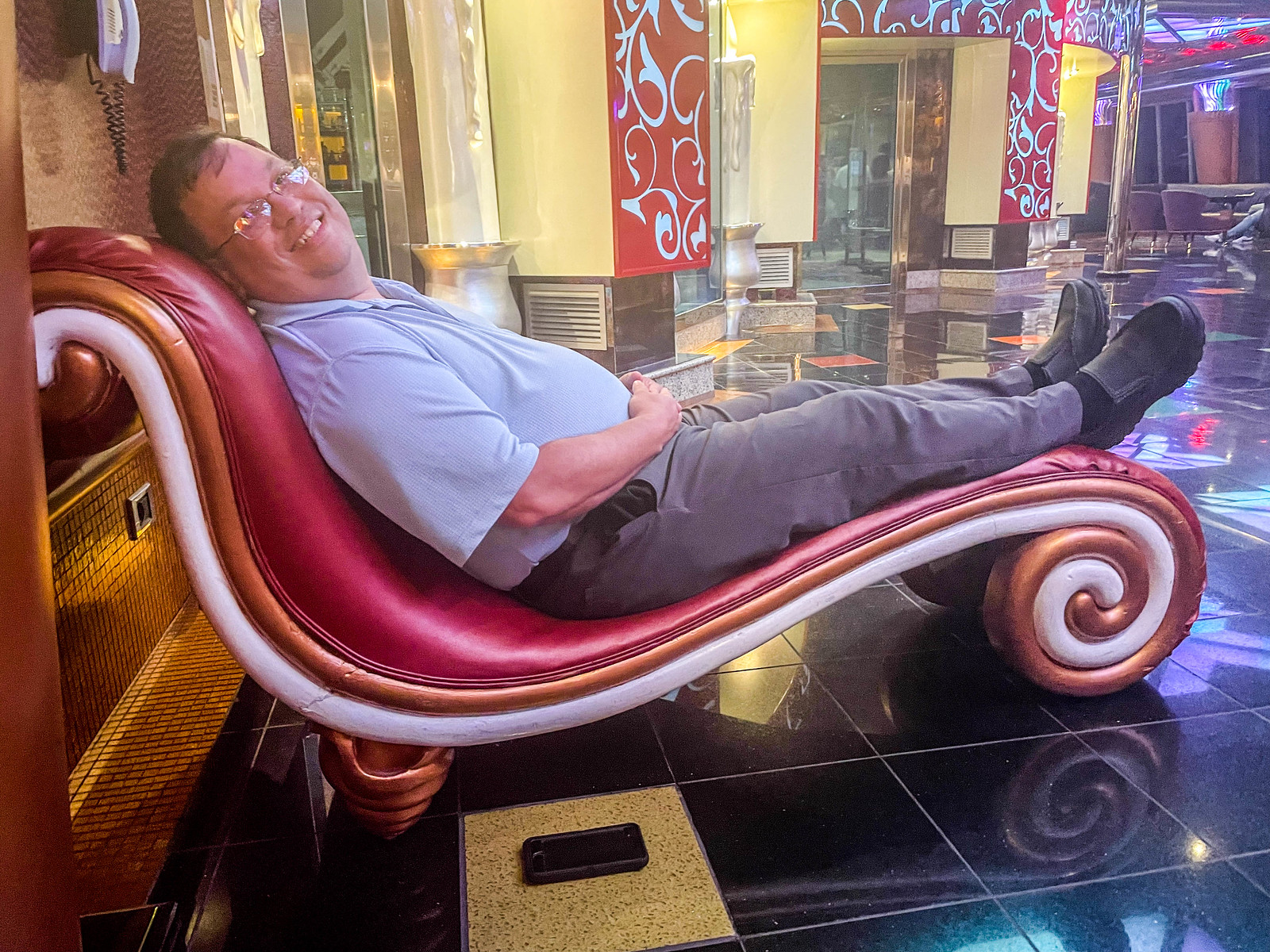 We went back to the Punchliner for a different comedian. Can’t remember his name, but he was decently funny. 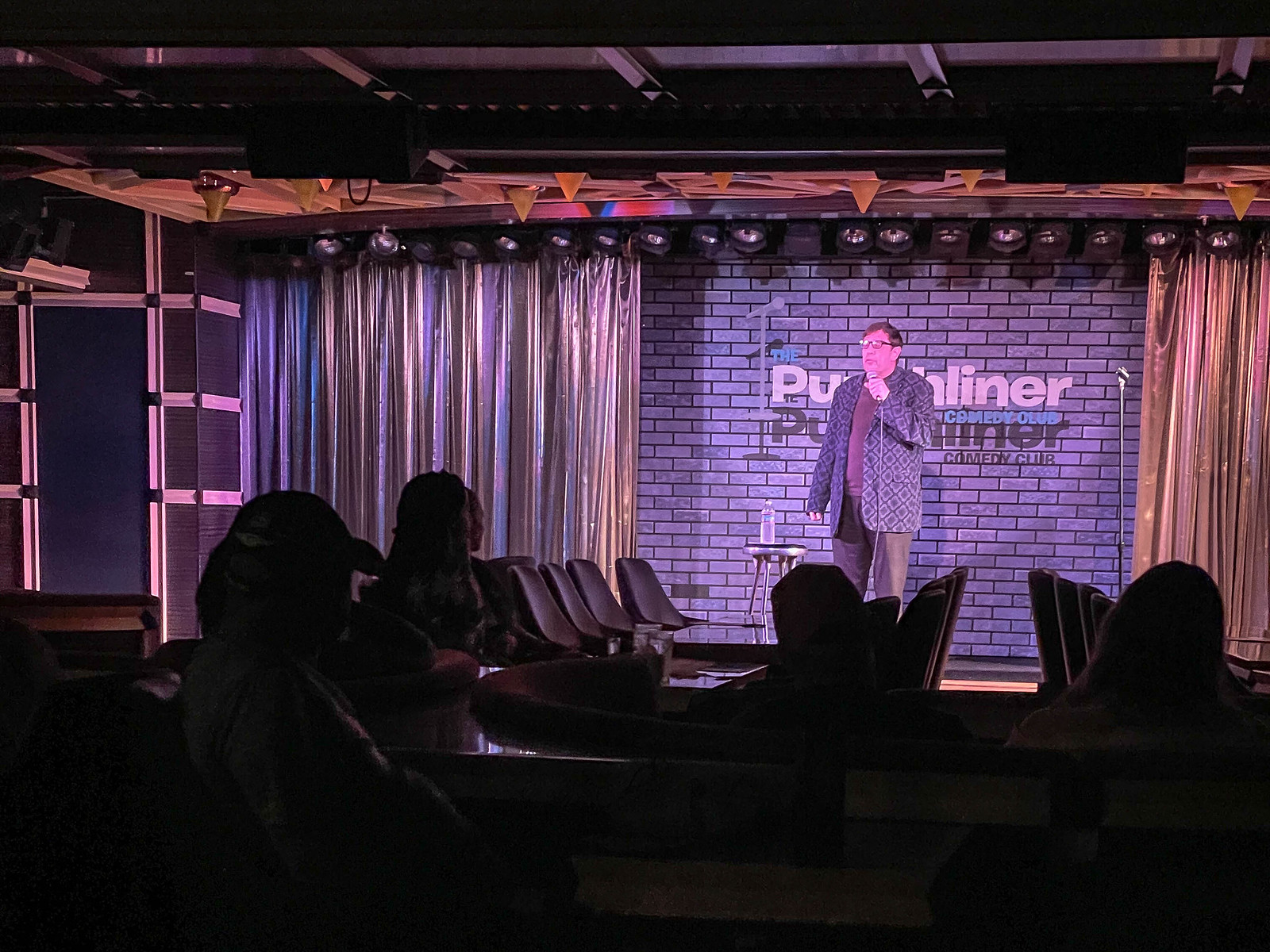 One of the things I love about cruising is you do as much or as little as you like. I hope this post about days at sea gives you glimpse into what it’s like. Here’s a couple more posts about Days at Sea from other cruises:
Time on the Ship – Carnival Horizon
Days at Sea – Carnival Pride

Next Cruise post will be about our day in Montego Bay, Jamaica!

Please know that the cruise industry is suffering after COVID and really having to cut back in every way possible to keep the business afloat. 😉 I hate that I have to talk negatively about the bad service and other issues, but it is what it is and I want to be truthful. I’m sure as time goes on it will get better.

One thought on “Carnival Glory Cruise:Day 2 & 3”