Saturday
We left Saturday morning at crack-o-dawn to head down to get Drew. Drew was in Orange Beach, AL for a soccer tourney. He had gone down earlier in the week since it was spring break to enjoy some time on the beach before his games began on Saturday. So that was about a 4 hour detour. We stayed for both games. Got to have some Shrimp Po-boys at the Shrimp Basket. 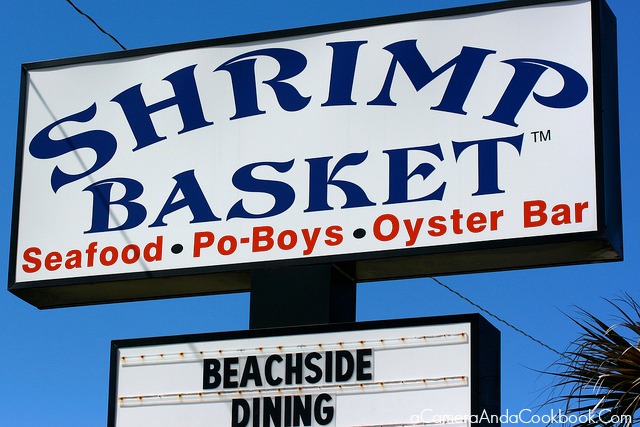 We got out of town about 3ish. Spring Break traffic was horrific, so we ended up going a different way. We had planned to drive straight through, but we decided being half dead from lack of sleep the next day wouldn’t do anyone any good. We stopped in Minden, LA, a town just east of Shreveport. We stayed at Best Western. 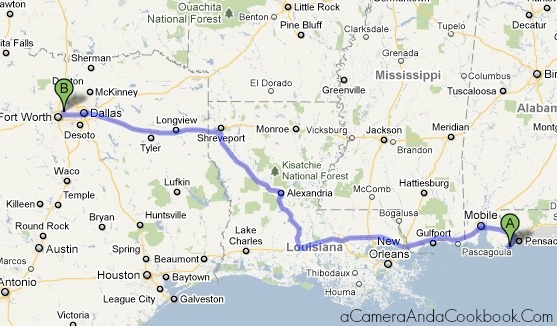 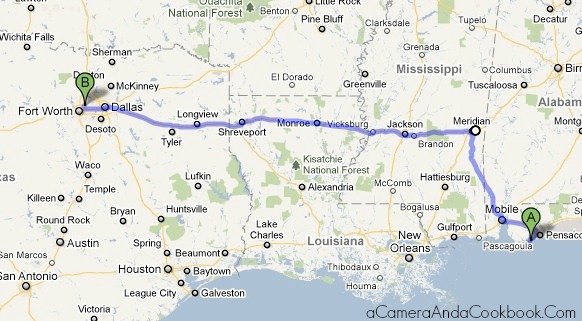 Sunday
The next morning it was up and adam for about 4 more hours on the road. When we got into FW my Dad was out cycling, so we continued on over to Granny’s. My Mom was over there, so we had a nice little visit and was able to let Daisy run around in the backyard. After a few phone calls, I got the schedule of all the goings-on. We lunched at Braum’s, making the most of our short time and getting food that we can’t get at home. From there we went by the house (where I grew up, Grandmother’s house, now where my Dad lives) dropped off our stuff and changed our clothes. We dropped the boys off at Granny’s as they would get restless being at the funeral home for too long. Dad, Rob, and I went to visitation. It’s always such a difficult thing to see, but really I didn’t cry like one would expect. In fact, I think I cried more right after finding out on Friday then, I did during my time in Texas. My Dad had mentioned before that they didn’t have anything for Grandmother to wear because in the process of cleaning and clearing out the house in the last couple years, her clothes were given away. They managed to find a pastel color shirt, which like my Uncle Mike said was very Spring-like. To me and probably my Grandmother it looked like a shirt she would work out in the yard in, which was something she enjoyed doing with Granddad. Grandmother’s hair was brushed up, not curled like she used to wear it. If she were to have dressed herself, she would have been in red. She loved to dress up and RED was her color. In the long scheme of things though, it really doesn’t matter what she was buried in. If it wasn’t for visitation, no one would know or care what someone is buried in, right? The flowers that lay on her casket were big, beautiful and full of pastels, which matched her shirt. So after having some “time” with her, we sat down in the room and chatted about old times and Dad shared some conversations of late that he had with her. This was a good time of reflection and closure for all of us. I’m thankful to Rob for suggesting that we go. Otherwise, it would have been more of a hurried visit, if we would have just waited to come at 4 when everyone else was going to be there.

We went back over to Granny’s and got the kids and the dog. Dropped the dog off back at Grandmother’s and then it was pretty much time to go back to the funeral home. When we got there most of my cousins, aunts, and uncles were in the waiting area while people took turns going in to see her. We were greeted with hugs by most of them. After some visiting and allowing the boys to see Grandmother, we anxiously journeyed over to Joe T. Garcia’s. I was so excited about this as it’s been years since I’ve eaten there and I think in all my years in Texas, I only ate there once! We had a lovely time catching up with everyone and after dinner we got some family pics. Here’s a few: Pics of the Fam

After that we somehow found room for dessert and treated ourselves to Braum’s Ice Cream. YUMMY! Then, back the house for bed.

Monday
We got up and Rob decided we should go somewhere and not just sit around and visit. The boys deserved to be able to run around and act like boys, at least for a little while. I decided after driving through the Stockyards the night before, I wanted to go back there. We enjoyed walking around. We parked for $1 just past the Cowtown Cattlepen Maze, but if we would have kept going we could have parked for free.

We walked down Exchange street stopping along the way for many pictures! We went into the Livestock Exchange Building/Stockyards Museum building, but didn’t go in. We continued on through the back door of that building to see the livestock. We went back through another gate and saw smaller livestock. Great, FREE, entertainment! Drew was very curious to go into the Cowtown Coliseum/Rodeo. A tractor plowed the field preparing for the next event. So now going to a Rodeo is on Drew’s “want to do” list. We walked around a little while longer and then it was time for the first Cattle Drive of the day (11:30 & 4:00). Here’s some pictures from the Cattle Drive. On our way back to car after the drive, we stopped by the petting zoo, which wasn’t being manned so we got to pet for free. After leaving the Stockyards, we galavanted over to Grand Prairie, TX where we ate one of “new” fav Fort Worth eateries; Ton’s Mongolian Grill. Read about that here. YUM!

After stuffing ourselves at Ton’s we raced back to get dressed for the funeral. The funeral was a nice time of reflection. My Uncle Mike thanked everyone for coming and then my Uncle Eddie talked. It was very touching to hear of conversation he had with Grandmother a few months ago. Then the preacher, who had never met Grandmother, spoke. At the end of the service, we each took the pink roses that were in our seats when we sat down and laid it upon Grandmother’s casket. I patted it (and her; figuratively) saying good-bye, thinking in my head (as Grandmother used to say), “It’s not good-bye, it’s see ya later!”

We visited with everyone and said our good-byes, went back to change clothes, and then back over to Granny’s. We had sandwiches and soup followed by the best Strawberry pie ever! We visited with Granny and my Mom. We stayed there pretty late, but realizing that the next day would be long we had to get to back over to the house. After putting the boys to bed, Rob and I ended up staying up really late talking with Dad, but it was good. We all needed that.

Tuesday
We got up, packed the car, and dealt with horrific traffic nearly the entire way home. So much for our great idea of going a different route! grrrr….