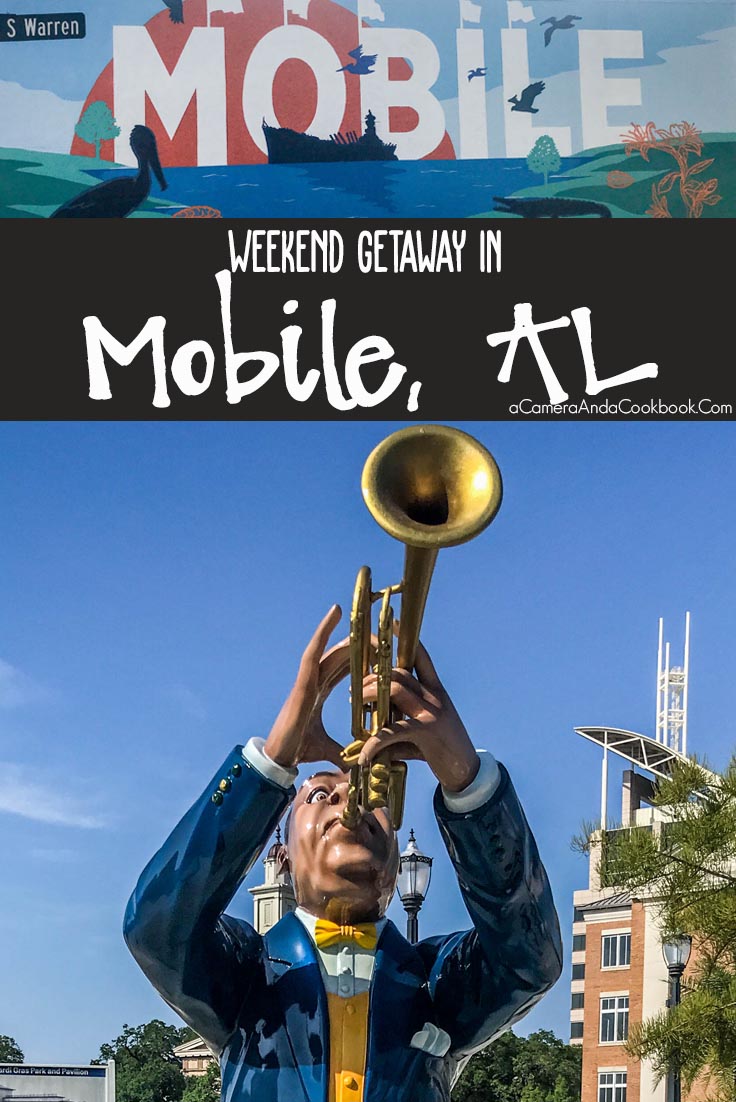 Back in August, we took a quick little getaway to Mobile for the weekend. Alex had gotten the first few days of school out of the way and Drew and Caitlyn were about to start school. So one last little hurrah before the major grind for the fall. We left right after work on Friday, drove 3 hours, got checked in, and found a place to eat for dinner. We ended up walking to Von’s Bistro, which was within walking distance of our hotel. We stayed at the historic Battle House. I got the Southern Hog Tacos, which were pretty good. Everyone else got the Hibachi Express.

Here’s a picture of the Battle House hotel where we stayed. One reason we decided to do this little trip was because of the RSA discount that we get as state employees. The Battle House hotel is one of the hotels that takes the discount and I am so glad, because this historic hotel is beautifully maintained. The lobby is quite grand with a domed skylight which dates back to the early 1900’s. The rooms are nice, nothing fancy, but large enough for the 5 of us to be comfortable. 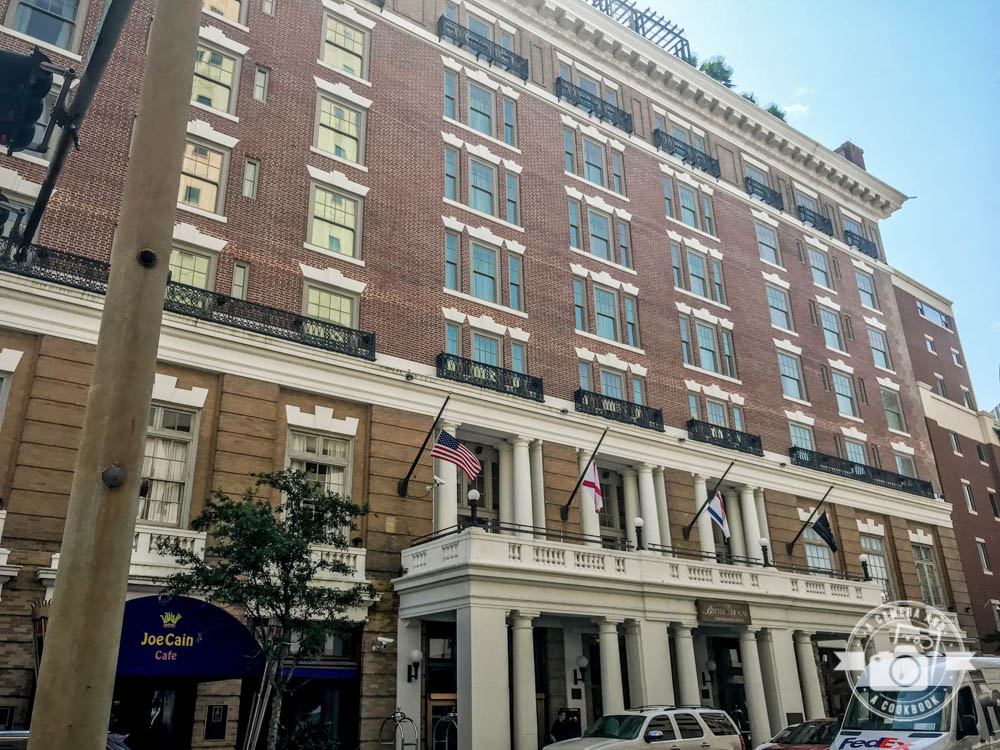 There is a lovely rooftop pool on top of the adjoining skyscraper office building that is accessible by an enclosed bridge walkway. Rob and I enjoyed some peace and quiet Saturday morning. 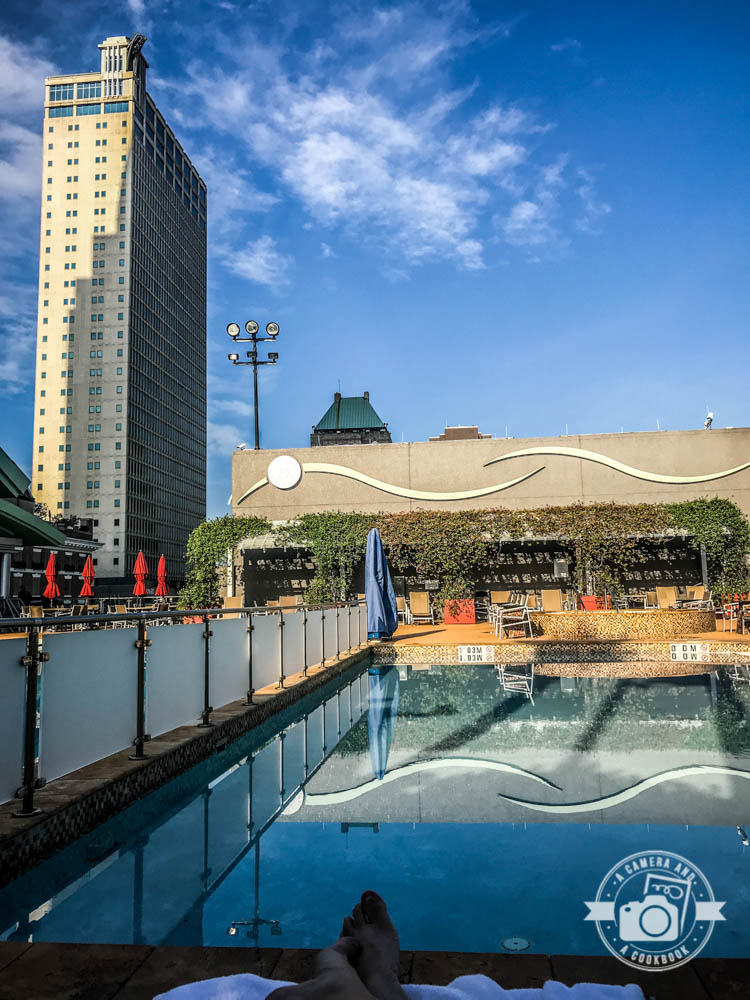 Another cool thing about the Battle House, if you go up to the 2nd floor on the front side of the building there’s an arch way. You can stand there and have someone else stand on the other side. Whisper and listen. The person on the other side will hear you as clear as can be. I love little things like this. 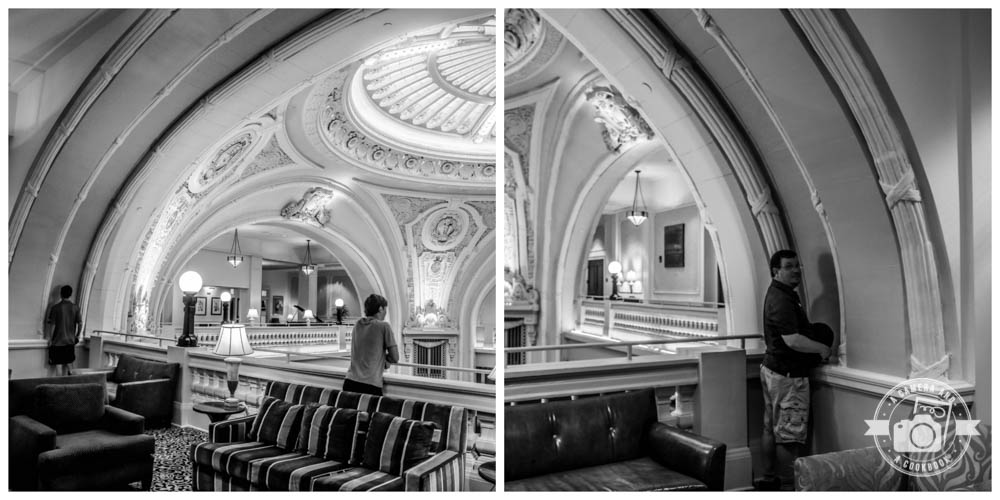 It was getting hot quickly, so we decided to explore the area on foot and then grab a late breakfast/early lunch. We walked down to the pier to see the cruise ship. Mobile is actually one of the oldest port cities in America, but only since 2004 has it been a cruise port terminal. It was exciting to see the Fantasy docked there as people were disembarking and crews were busy getting ready for the new cruisers later that afternoon.

The statue of Pierre Le Moyne d’Iberville (1661-1706) who was ship captain, explorer, colonial administrator, among other things, stands watches the Mobile port.

As you walk around downtown you’ll see these painted Oyster Shells. 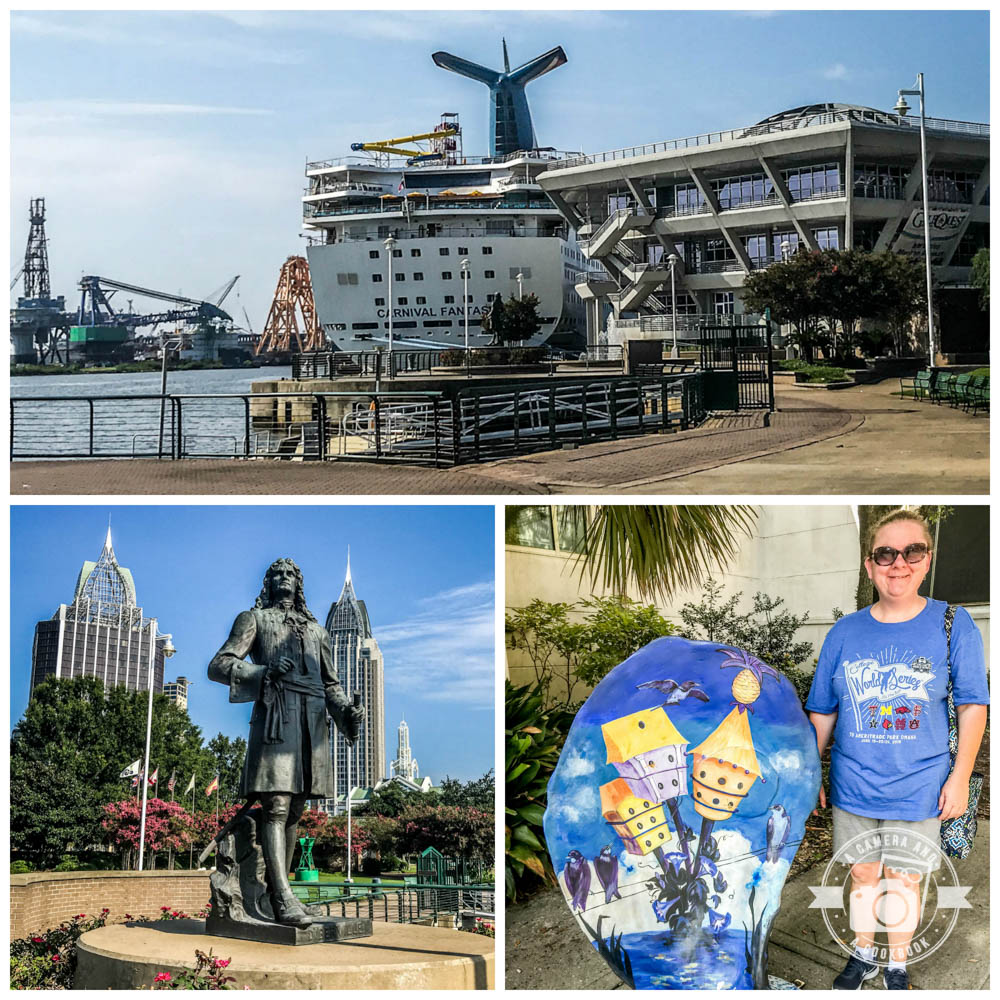 Mardi Gras Park is about a half mile walk from the Cruise Port. This is a city park in downtown Mobile, Alabama located on the site of the old Mobile County Courthouse. It has several statues representing the Mardi Gras tradition, including Mardi Gras royalty, jesters, and Joe Cain (as his alter ego, Chief Slacabamorinico), who is largely credited with initiating the modern way of observing Mardi Gras and its celebrations in the city after the Civil War. 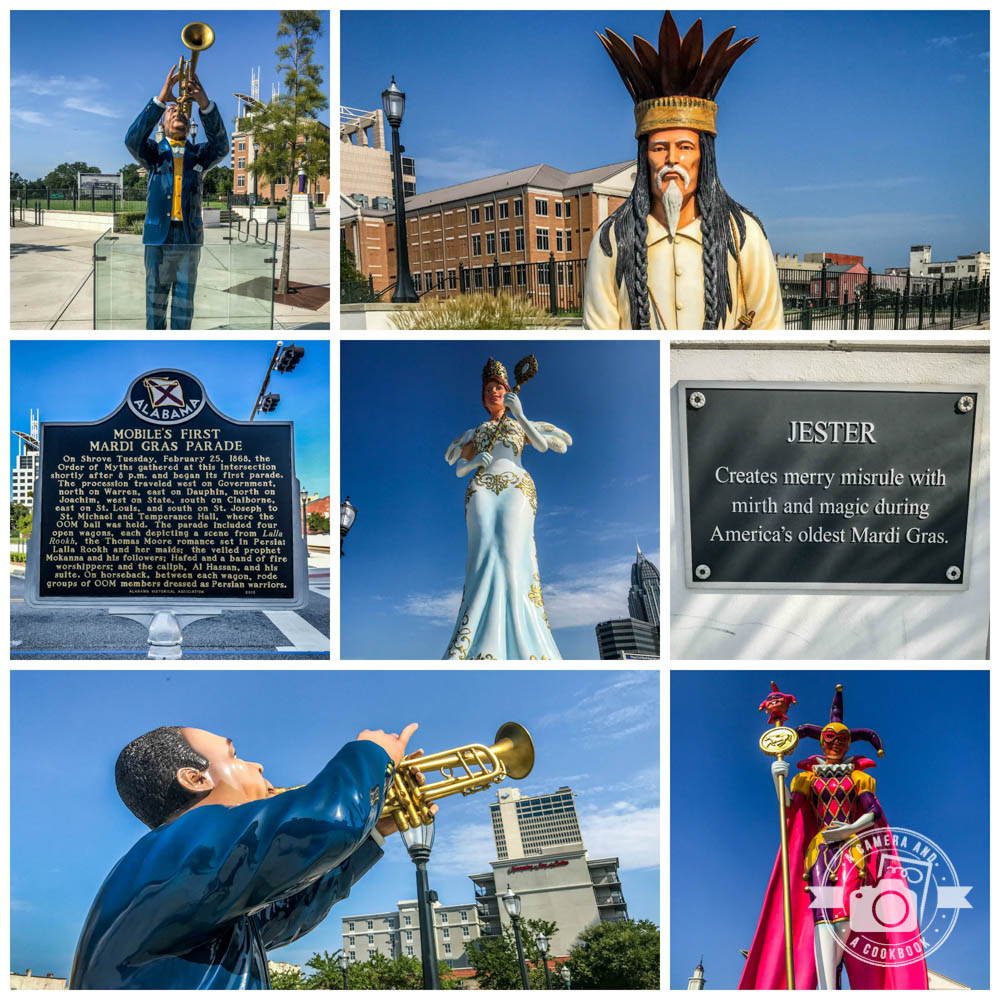 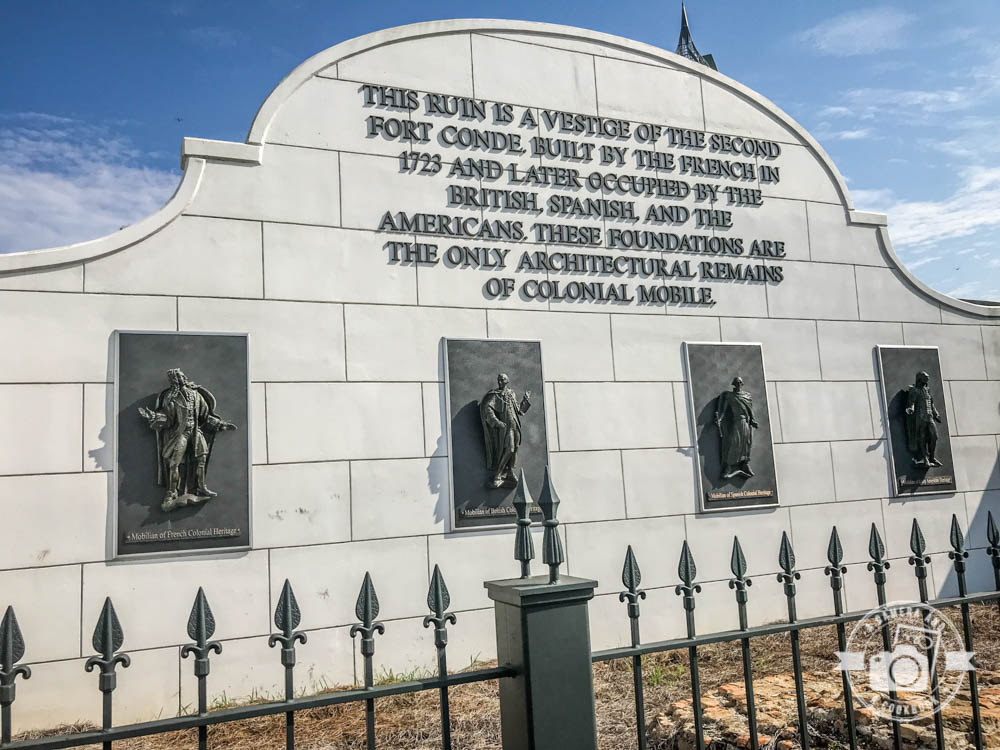 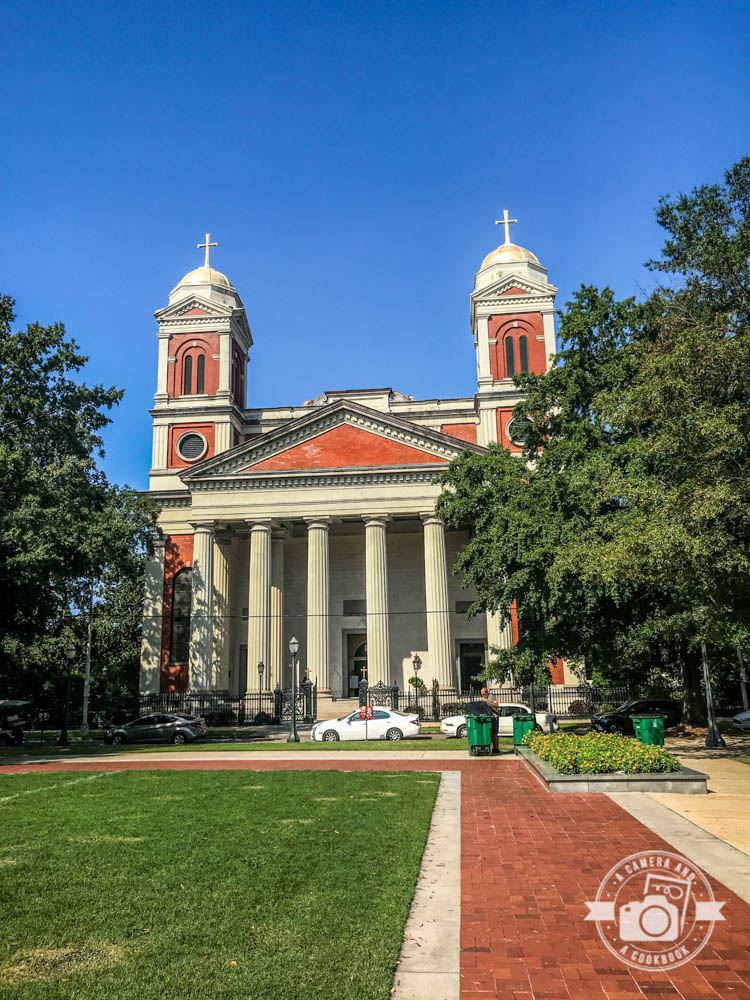 When Rob and I saw this Catholic Church we both looked at each other, because we had recently learned about the Stations of the Cross in our summer reading group. So when we entered Cathedral Basilica of the Immaculate Conception, we were excited to see these in person after reading about them. It’s amazing that we always go into beautiful catholic cathedrals and never knew the importance of these wall hangings. 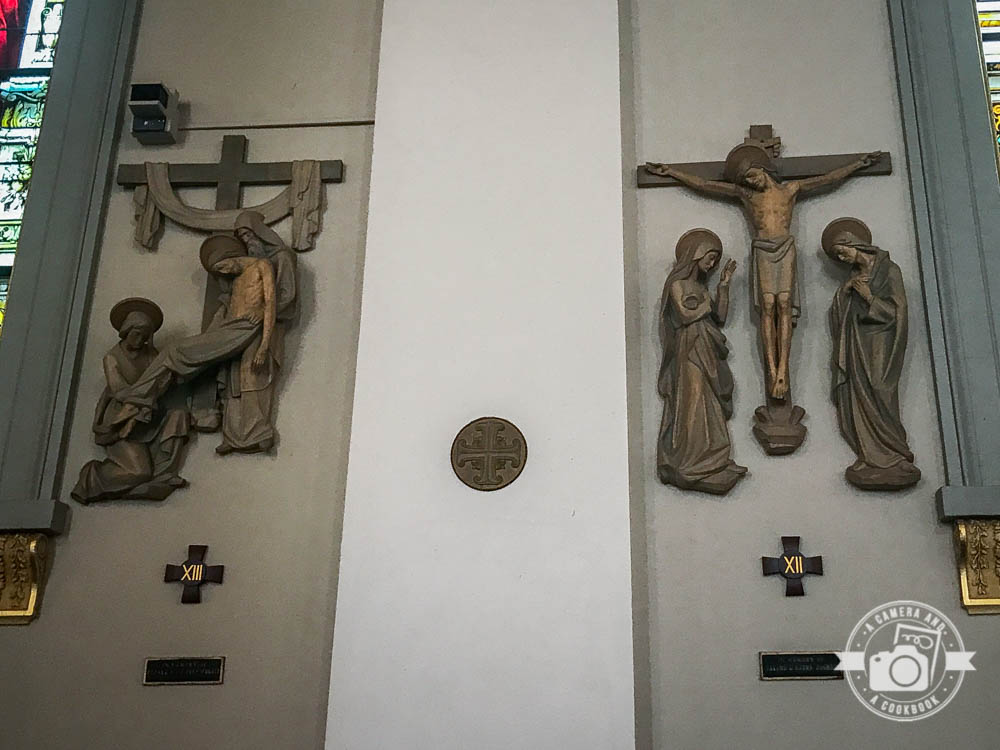 From there our stomachs were all growling so we ended up at the The Ruby Slipper Cafe for brunch. Such an interesting menu. So many choices. Drew and I got the Shrimp and Grits, which we weren’t huge fans of, unfortunately. Everyone else really enjoyed there. 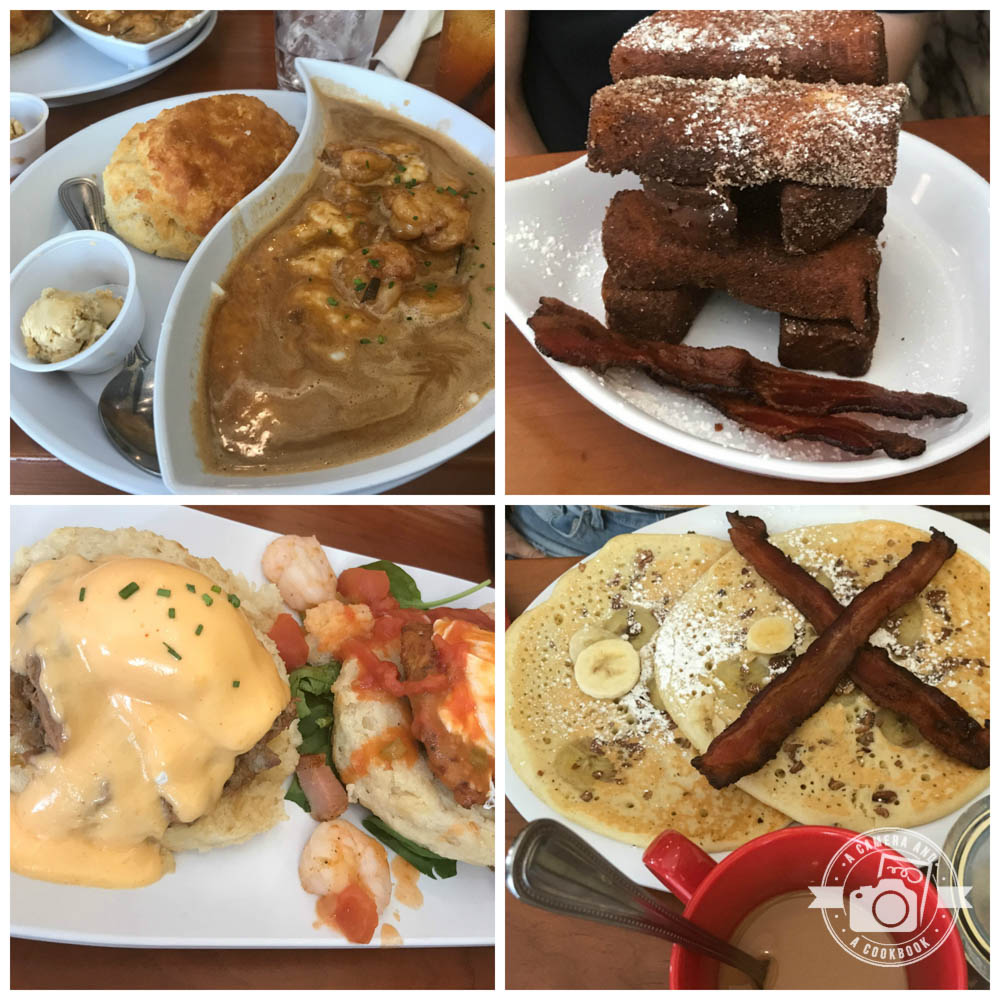 Church Street Graveyard is the resting place of Joe Cain, founder of modern Mardi Gras. This is

opened in 1820 and officially closed in 1898. It encompasses five acres of burials set within an aging brick enclosure off Mobile’s Government Street. Strolling its level grounds, visitors can get a feel for Mobile’s colorful early history. Among those buried here are Don Miguel Eslava, a Spanish governmental official; Col. Jerome Cluis, a Napoleonic refugee; Gen. Edmund Pendleton Gaines, a hero of the War of 1812; Madame Mary Josephine Hollinger, who was born in British Mobile; and various Revolutionary 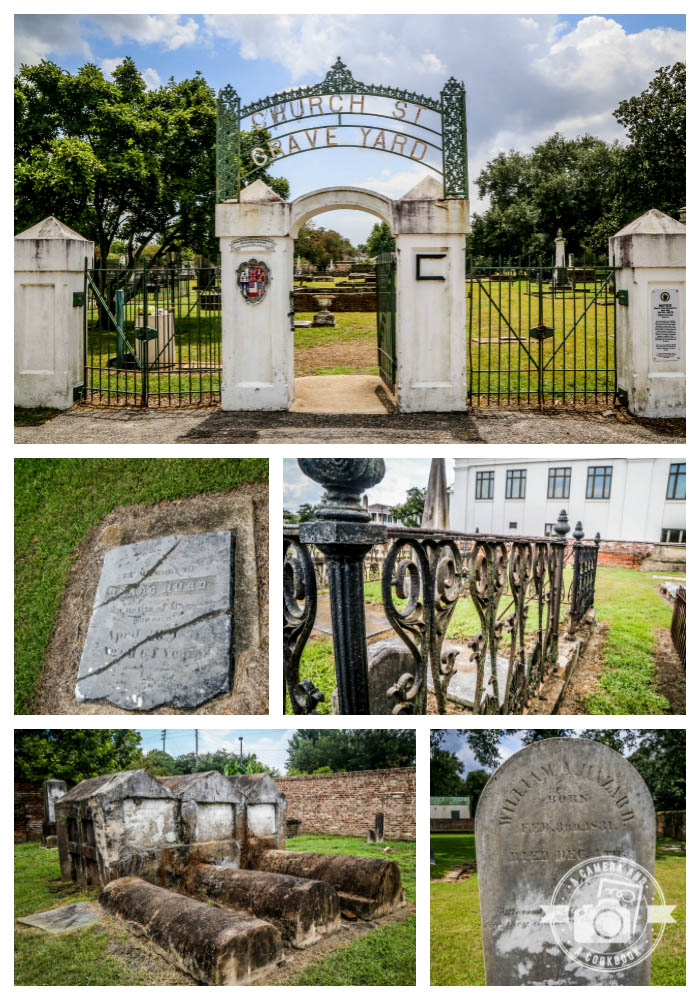 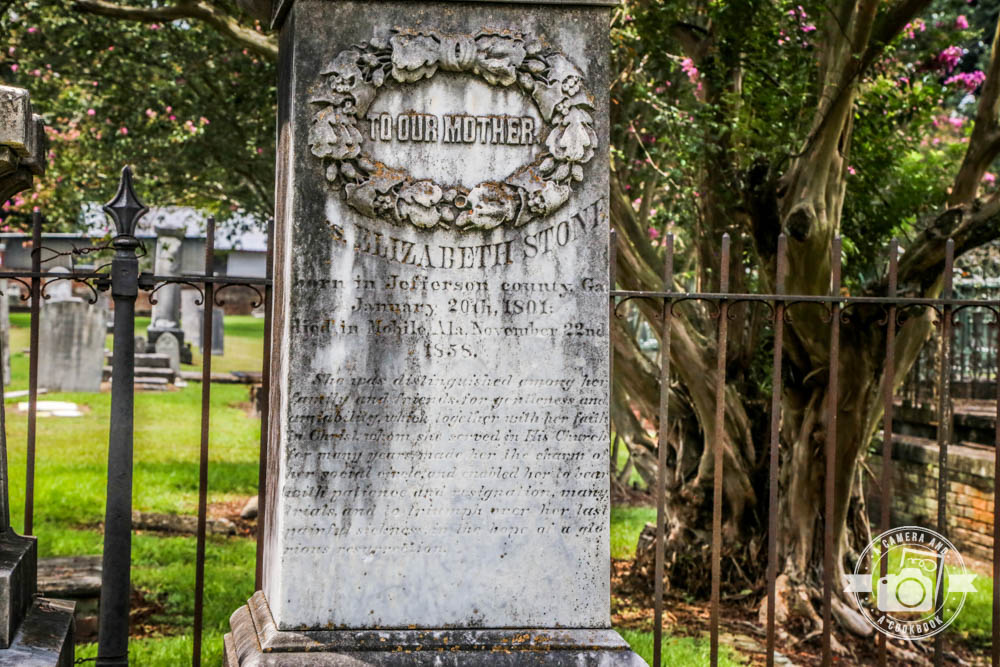 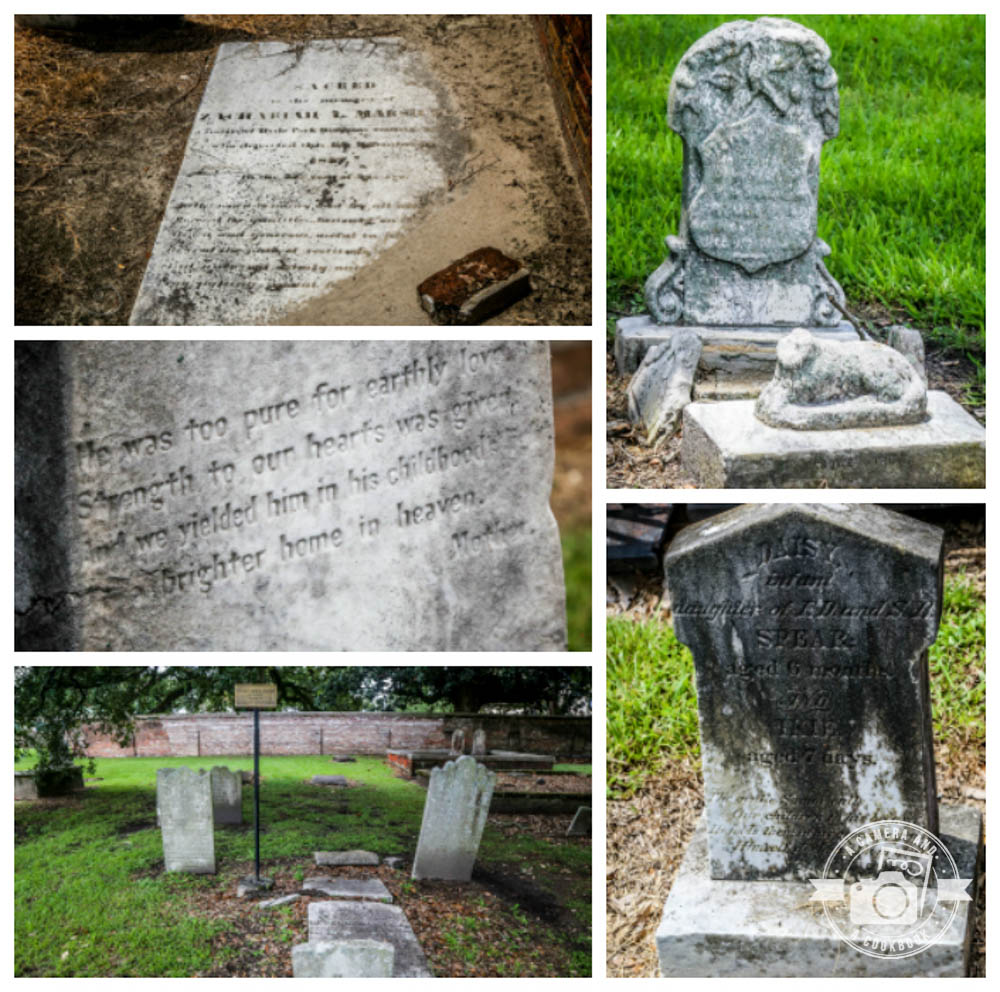 We swung by the hotel and got the kids so we could go to the Mobile Carnival Museum. Mobile is the home of Mardi Gras. Yeah everybody thinks Mardi Gras started in New Orleans, but that’s actually not the case. This museum mainly has display of the King and Queen from the Mardi Gras courts. I was hoping to see more about the floats and stuff surrounding the parades, and while they did have some a couple float parts it again was centered around the amazing trains that the queens wear, along with their dresses and the garb the men where. In the first room where the tour starts is where you will see the float pieces as well as a place to dress up. 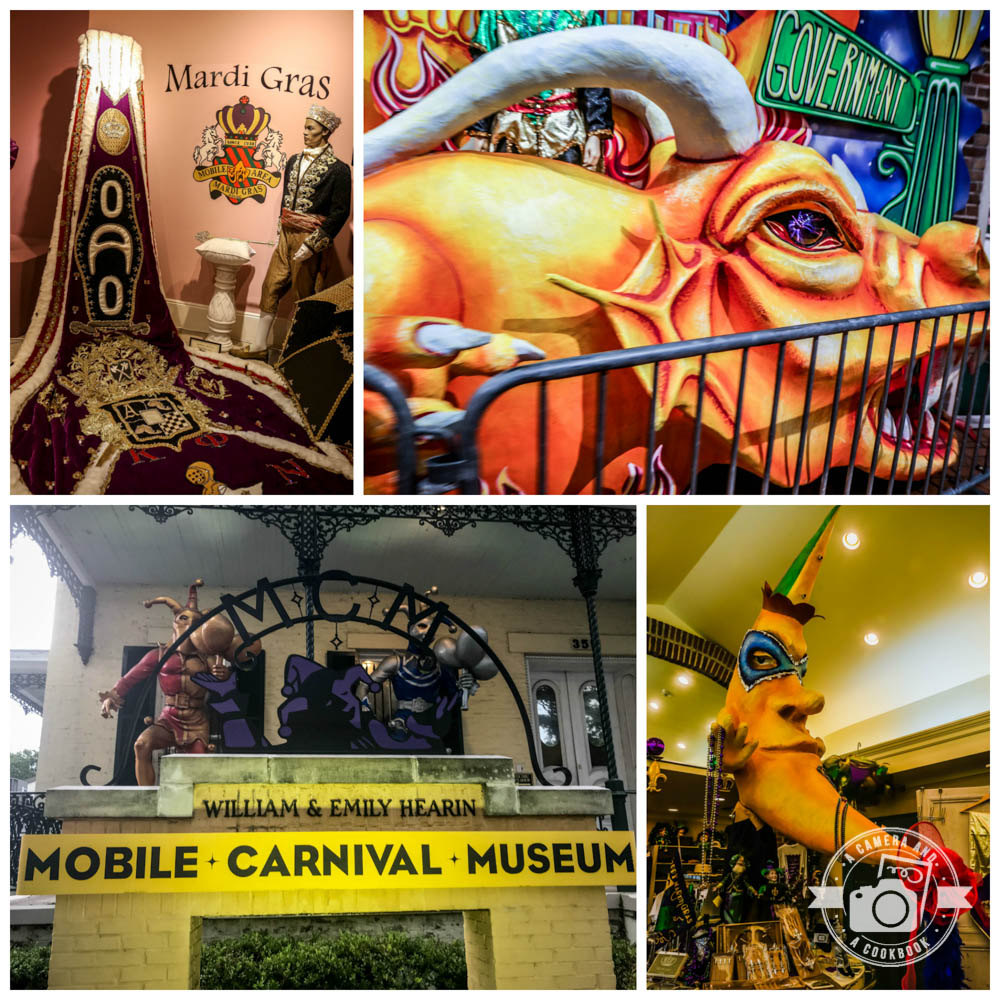 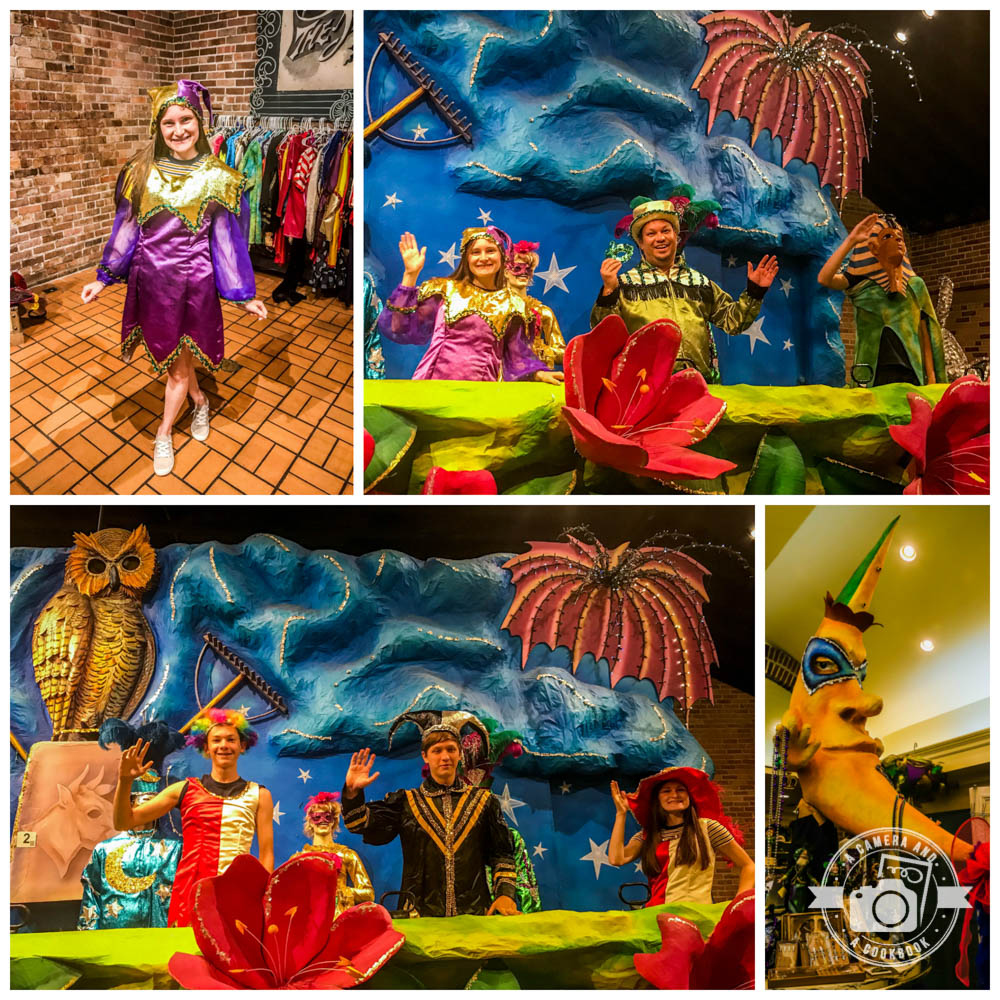 For dinner we went to Callahan’s Irish Social Club, which has the feel of a dive bar. We got there early enough that we could eat without paying cover. The band started setting up while we were finishing up dinner. Everything was good; burgers, philly steak, shrimp po boy. 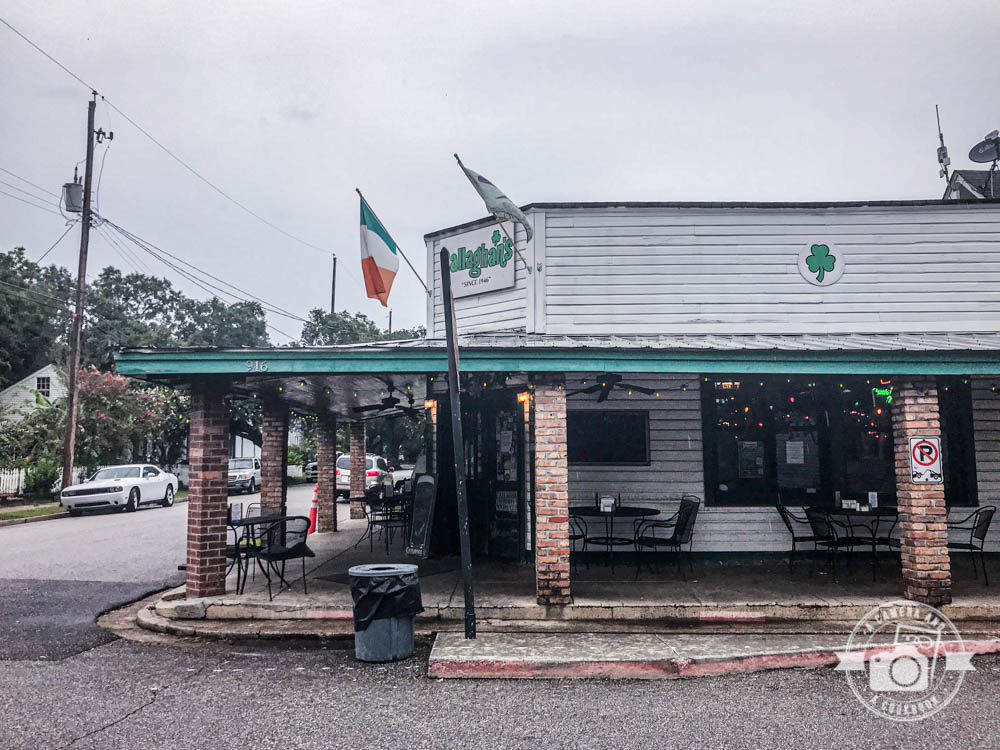 Saturday evening and Sunday morning we enjoyed time just relaxing at the pool. 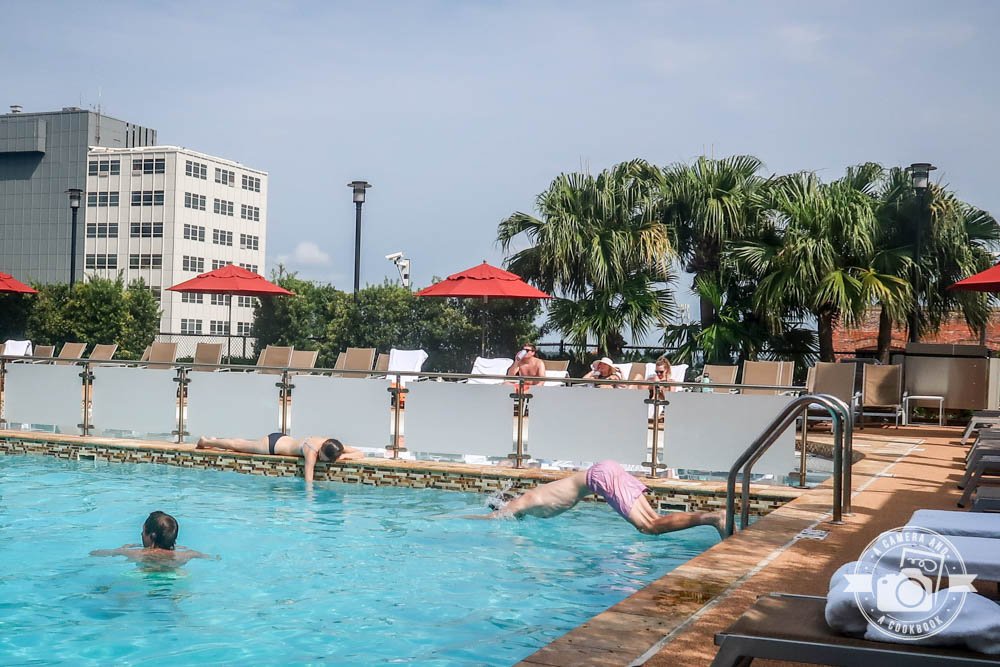 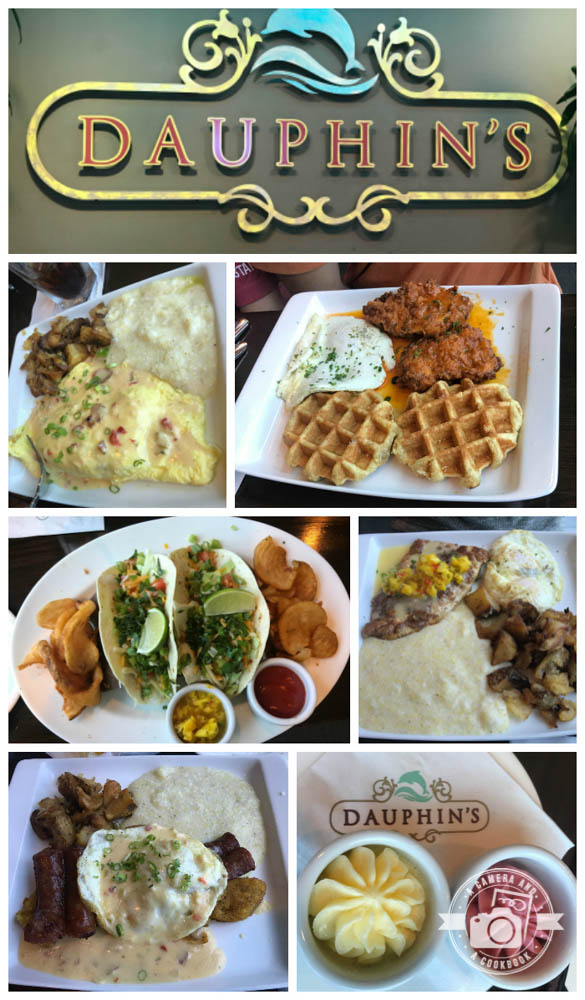 Great views from this restaurant that’s on the top of a high rise just a cross the street from our hotel. 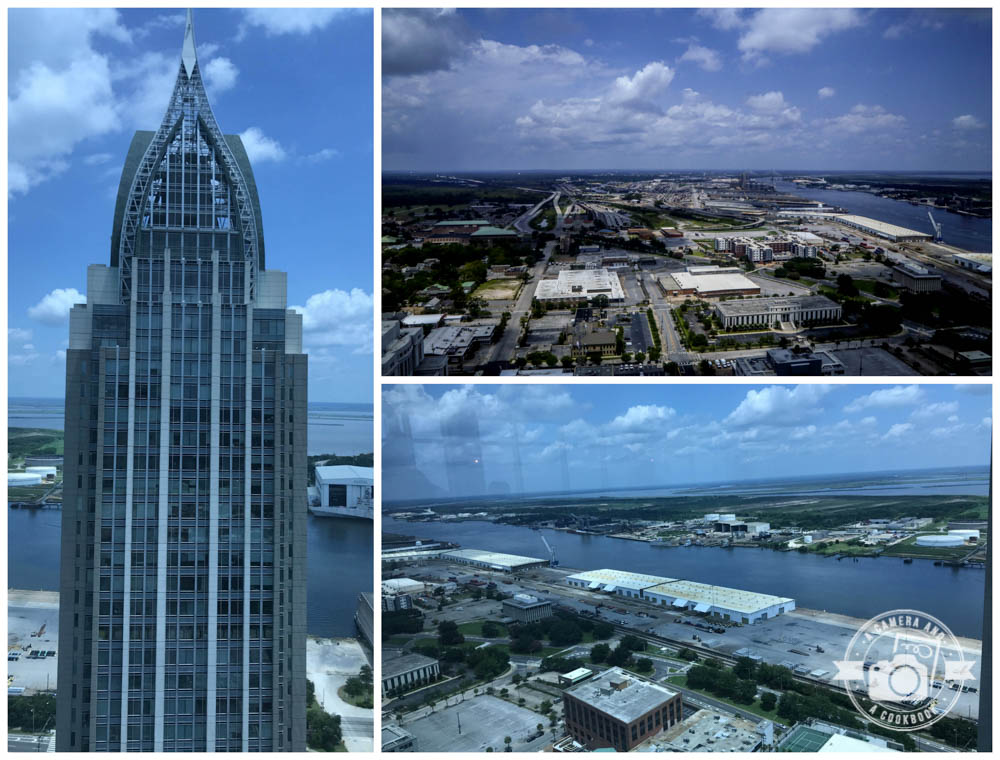 It was a great weekend away. Mobile is a great place for a quick getaway!