Tuesday night the week before 4th of July, Rob was talking with his brother about finding something “fun” to do over the weekend. The last few years we have mainly hung out at home and enjoyed time with our neighbors. Before that we headed to Texas to visit my family there. Anyway, after some thought and research we decided it would be fun to head up to the North Georgia Mountains. Since it was so close to the date, there were only a few options. We ended up staying here in Murphy, NC. We went with Rob’s Mom, Step-Dad, adopted sister, and his brother. Dividing the cost of the cabin ended up costing about the cost of hotel for one night!

Rob really enjoys going up that way for many reasons, which include the beautiful mountains and seeing his old stopming grounds at Young Harris College.

Friday
We arrived around 3, settled in, waited for the other carload with Rob’s Mom, Step Dad, and adopted sister, Rachel. Not long after they arrived, a group headed out to the store for groceries for the weekend. We planned to utilize the kitchen in the condo to help save money. 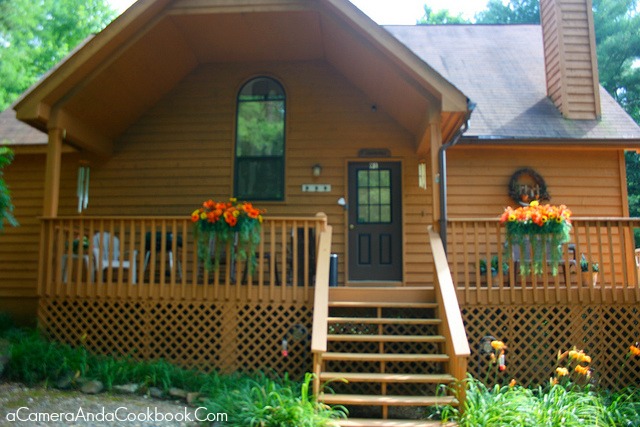 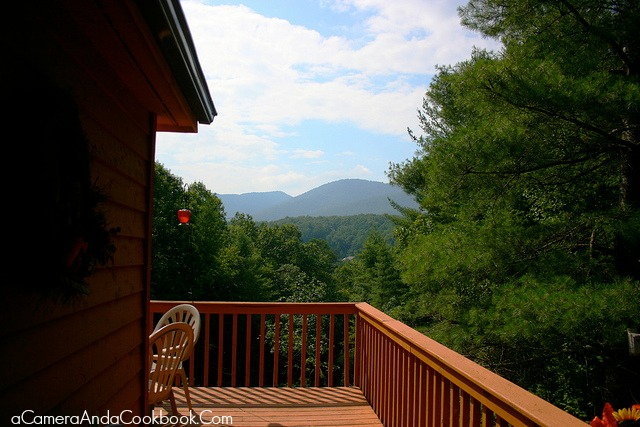 Nice wrap around porch with a beautiful view.

After they got back Rob and Nick got the fire going to grill the super thick steak. So yummy! We also had salad, broccoli, and stir-fry veggies. Dessert was Strawberry shortcake. 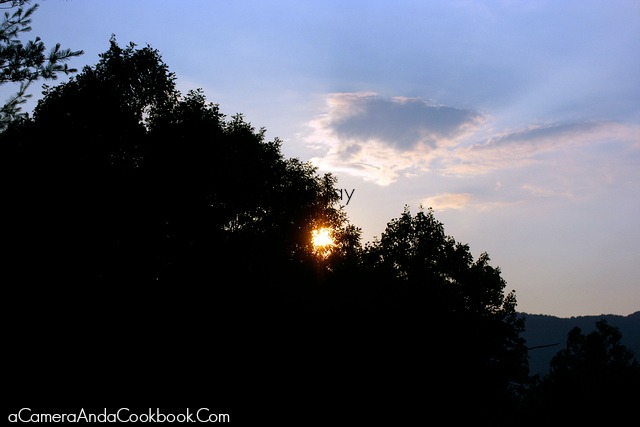 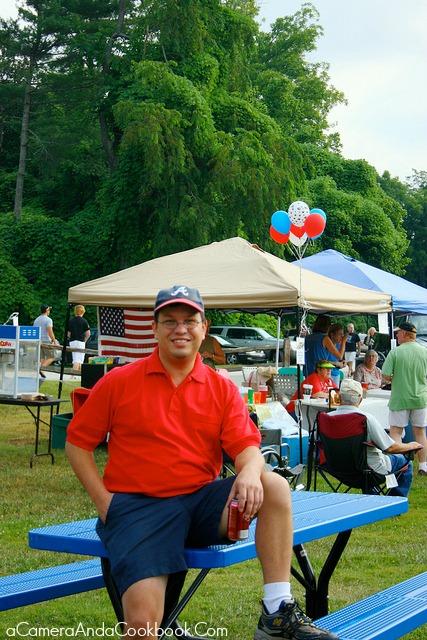 We got up and had breakfast. Then we went into Murphy for some 4th of July festivities. There were many of the normal carnival activities, which we didn’t participate in because they were so expensive. We are so spoiled to live in Auburn, where we have City Fest and other events that are completely free to the public. We walked along the little river walk, watched the ducks, and the kids played on the playground. 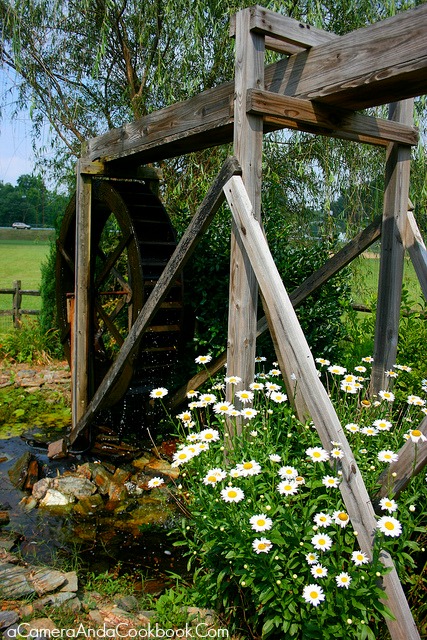 Pretty scene near the Riverwalk area 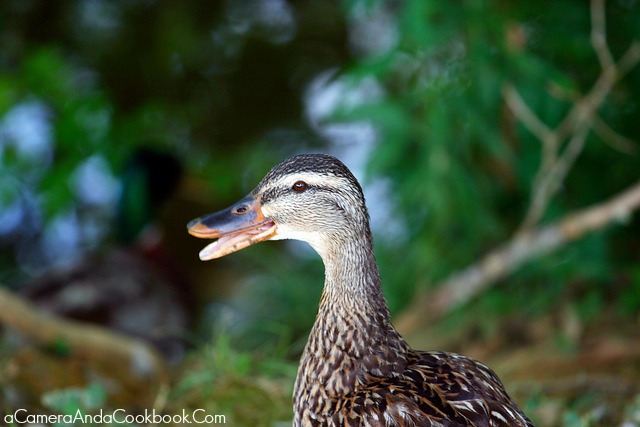 This duck kept talking to me

We made it back over to the area where they did a peanut drop. An airplane flew over dropping 5,000 peanuts. Everyone ran like crazy to pick up the peanuts as they fell to find the red, white, and blue ones, which could be turned in for cash. We didn’t find any of those, but it was fun anyway. 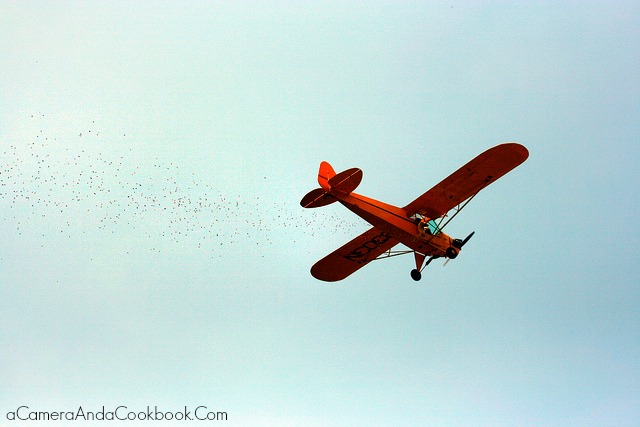 Airplane that flew over Peanut Drop

After that we went to the Cherokee Chambers of Commerce/Visitor Center and then we went to the Fires Creek Picnic area located in Nantahala National Forest. There we picnicked for lunch and the kids skipped rocks in the stream. 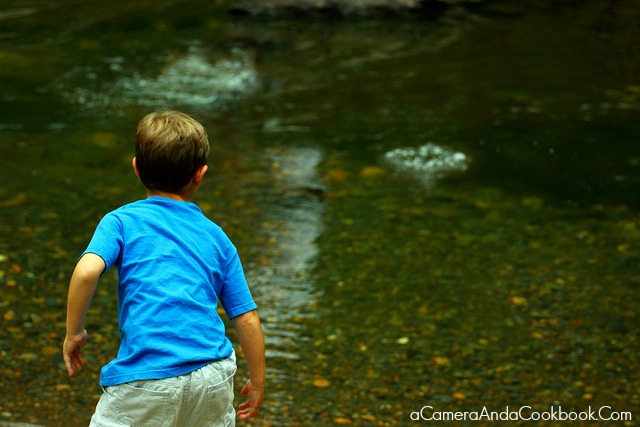 After we packed up our picnic lunch we went for a short hike up the Leatherwood Loop hiking trail. While hiking I was stung through my sock by a hornet. I screamed like crazy after realizing I was being stung and it wasn’t just a thorn poking me through my sock. After getting the durn thing off my sock, I hiked a little ways up to the stream. I was able to sit on a rock near the icy cold stream, where I soaked it to help the pain and slow down the swelling. 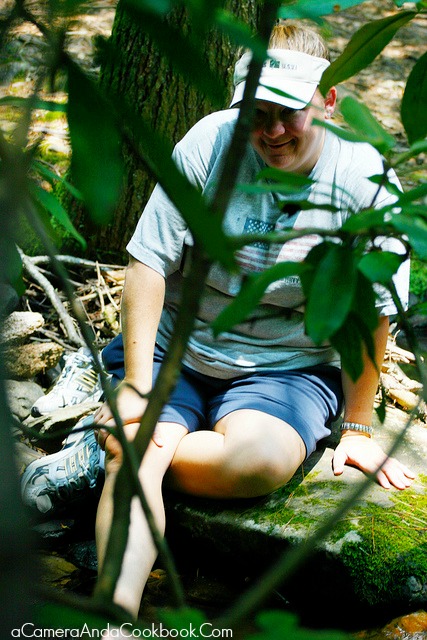 *Icing* my ankle in the cool stream after being stung.

We stopped at a couple places for some scenic pics and then back to our car. 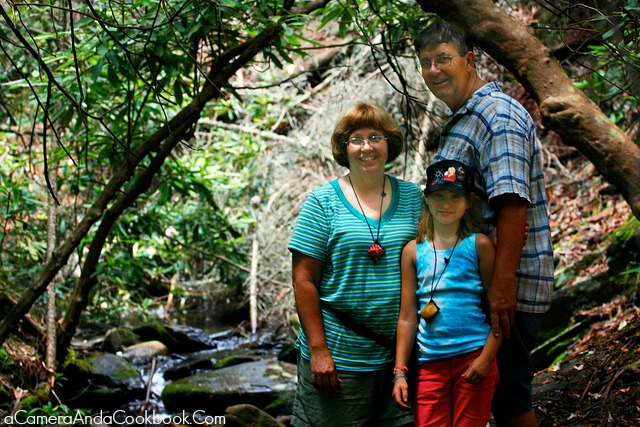 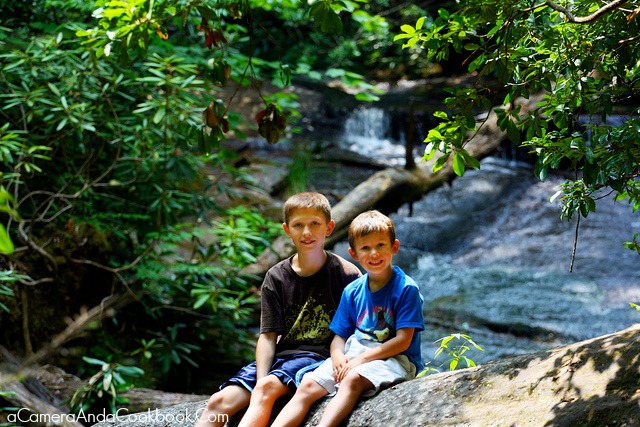 I continued to be in a great deal of pain. It was just a constant feeling of being stung over and over. The rest of the afternoon, I just chilled at the cabin. We cooked out hamburgers for dinner along with baked beans and s’mores. The rest of the family went to watch fireworks. I stayed in to rest and keep my ankle elevated and iced, but was able to see some fireworks from my chair.

Sunday
Sunday after having breakfast, we went to the Hiwassee Dam, which is so beautiful. 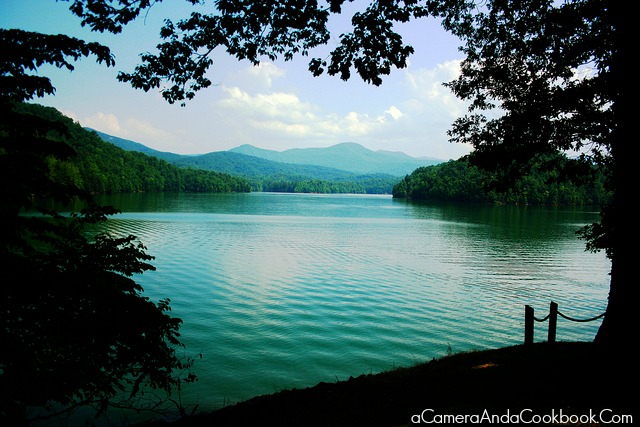 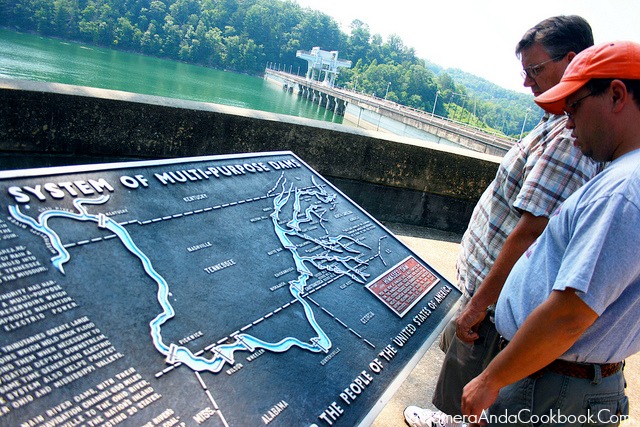 From there we drove around for a bit looking for a place to fish. We ended up down a dirt road in a secluded area. Although I lathered up in OFF the chigars found their to areas that I had not sprayed. I got nearly 30 bites. Ugh! At this point of the trip I had about had enough of nature and was ready to be inside. 2 fish were snagged, but both were smaller than my hand and were thrown back in. 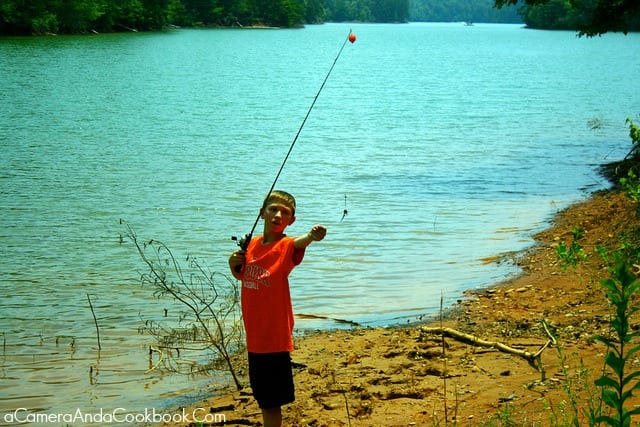 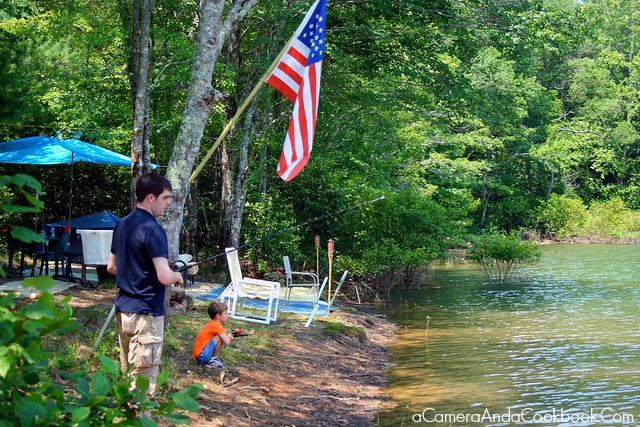 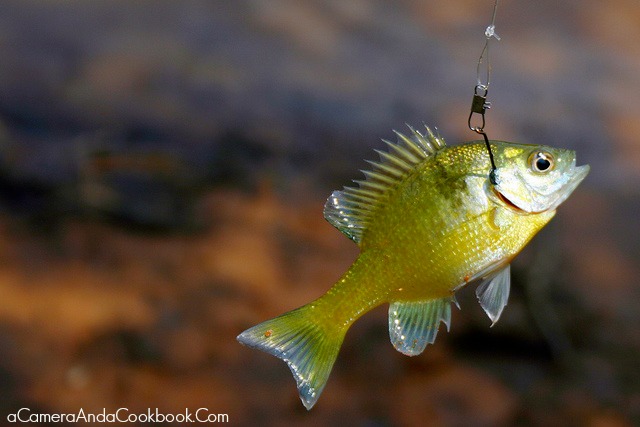 After leaving there we were hungry and next on our agenda was Fields of the Wood, which is something so different than anything I’ve ever seen. You can climb to the top of the Ten Commandments Mountain and visit The Psalms Of Praise. We ate lunch in the covered picnic area. Then, without it occurring to us that there were 372 steps, we walked to the top of the 10 Commandments! Needless to say we were ZONKED. We wanted to see the rest of the place, but it required climbing a lot more stairs. We should have planned to drive around to the top of the 10 Commandments and then seeing the rest by stairs (because there is no driving access.) We were able to drive up to the cross of flags, which is quite a ways up the mountain. Nice views also. 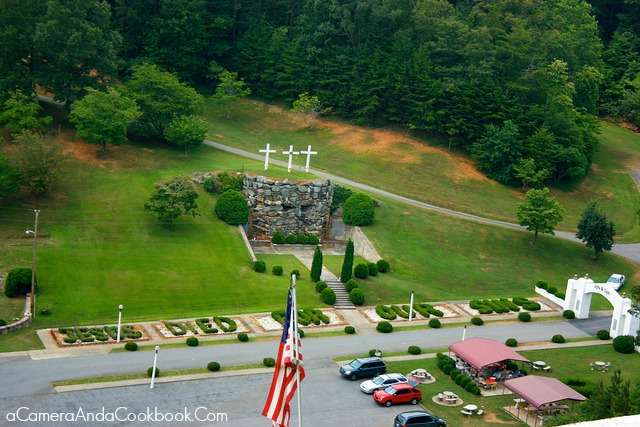 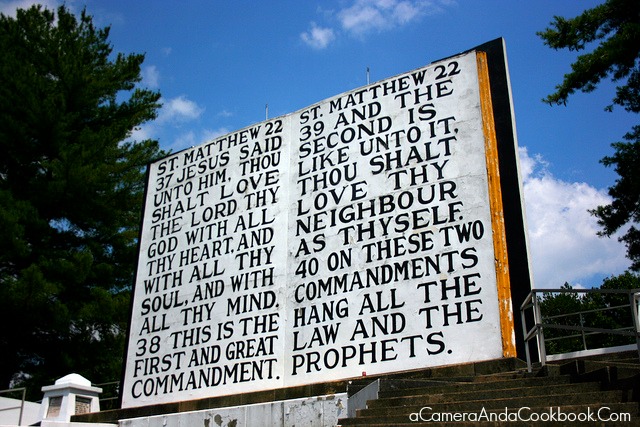 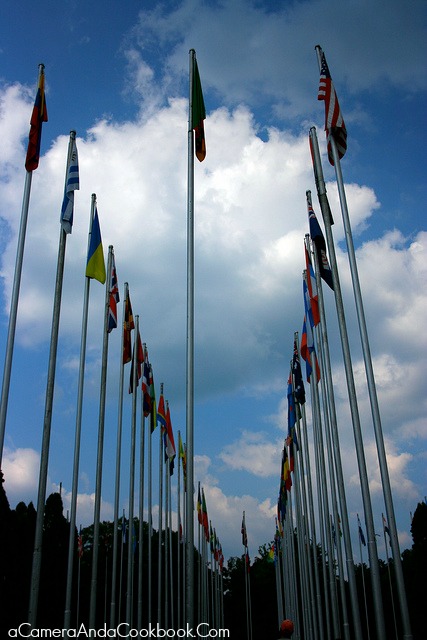 Then, we went back to the cabin for some much needed R & R and leftovers. Late that evening Rob, Nick, Drew, and I drove over to Brasstown Bald for a midnight hike to see the stars, surrounding cities, and possibly late night fireworks. It was nice and cool, in fact, downright chili on top of the observatory. The stars are amazing when you’re away from civilization like that. After tromping back down the mountain, we had a midnight snack at Waffle House in Blairsville. 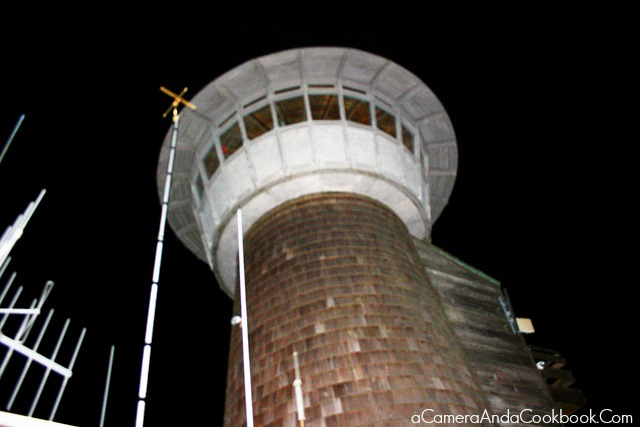 This is the top of the observatory. The tower is off limits to the public, but at the bottom of the tower there is a museum and info desk.
Monday
Monday we got up, started cleaning, and packing. The other car load of family was leaving first thing to head straight home. Our family along with Nick were headed out for another day of site-seeing. We wanted to get the most out of our trip and really didn’t want to leave. We stopped for lunch at Downtown Pizza and then back to Brasstown Bald for a daytime hike and an opportunity for Alex to see it. 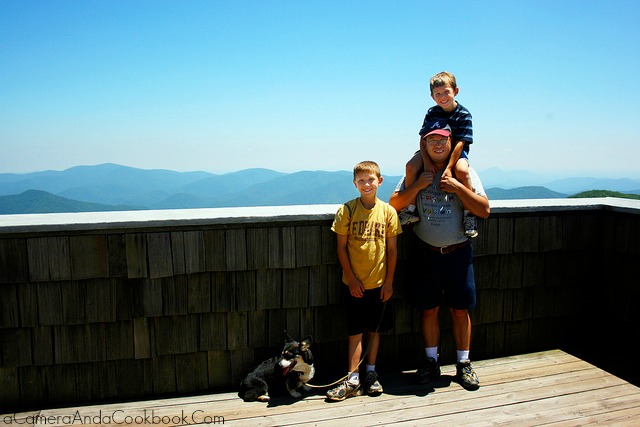 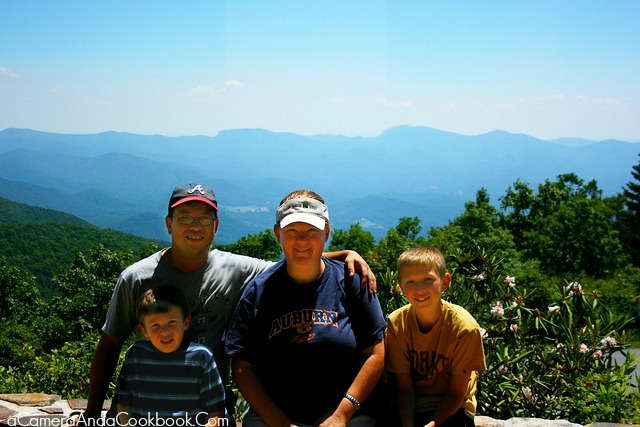 We left Brasstown and we were ready to get home. We did decide to take Richard B. Russell Scenic Highway.

Here’s a pic at one of the stopping points on the highway. Yah, I know it’s not “scenic”, but the road and cliffs were cool and then when this Maverick drove by, I couldn’t resist. 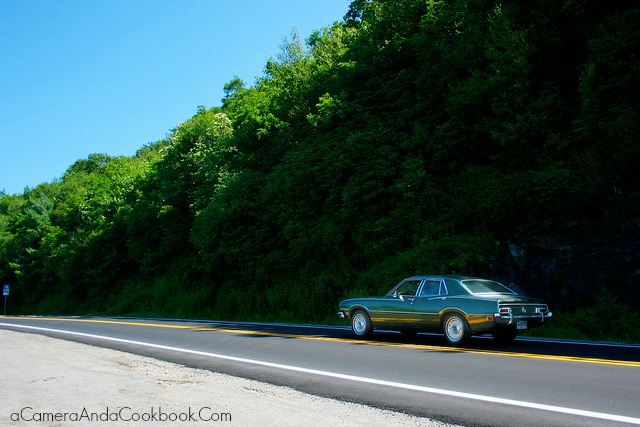 Then near the end of the trip, Alex got silly and wore my neck pillow on his head. 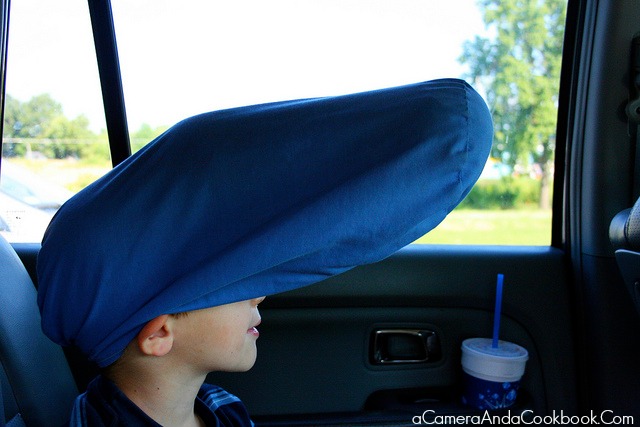 I have lots more great pictures from the trip that I would love for you to see, so click here.