This cruise was planned a little while after we found out we were expecting our 2nd child. We wanted to go ahead and bring Drew on a cruise, because we knew it would probably be quite awhile before we got to take him on one. Rob’s Mom and Step Dad joined us, which was nice. This trip was taken in October over a long weekend with a Columbus Day Holiday. We opted for a 3 day Royal Caribbean cruise to the Bahamas and the private island, Coco Cay. 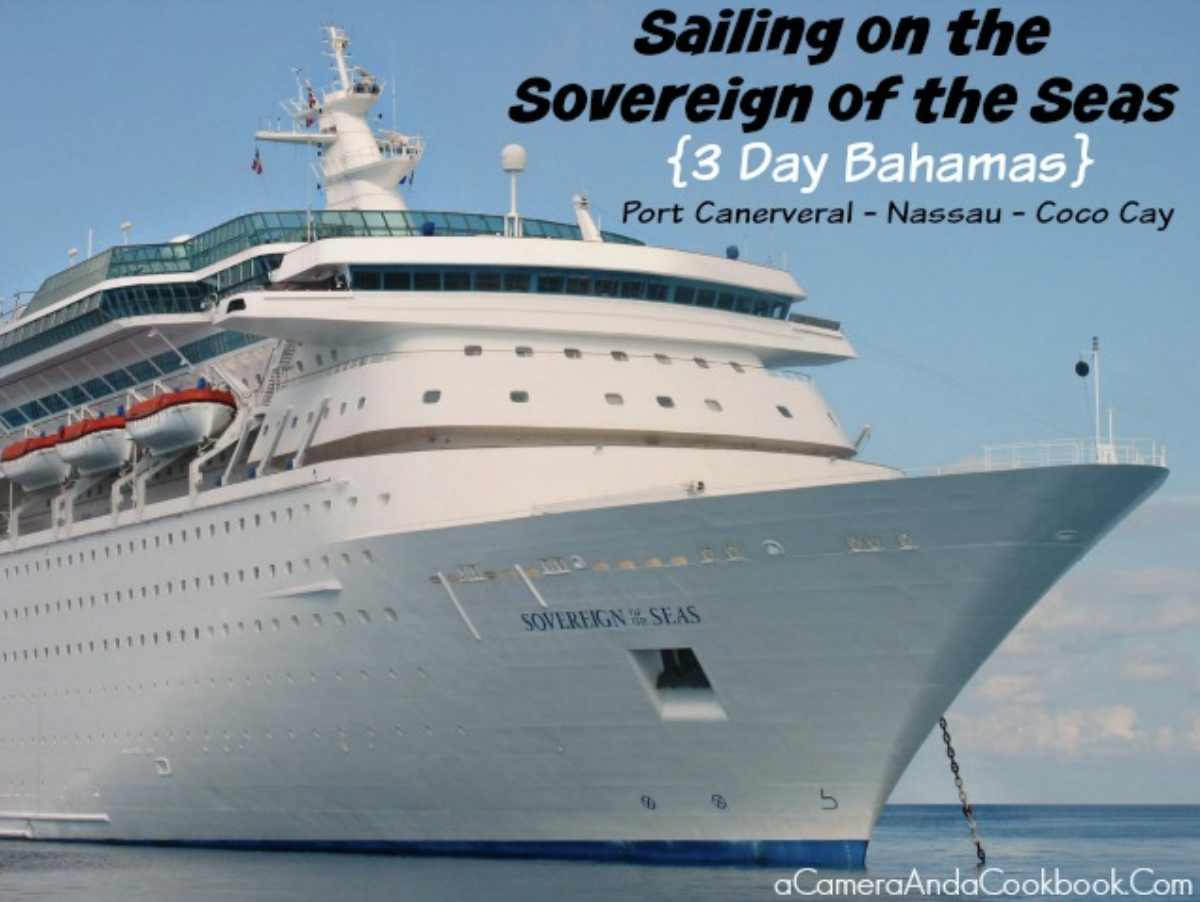 We left Thursday night and drove down to Orlando. We spent the night at the Amerisuites Orlando. This made for a relaxing morning of free breakfast at the hotel and heading over Cape Canerval to the port.

Here’s Drew excited to get on the ship. 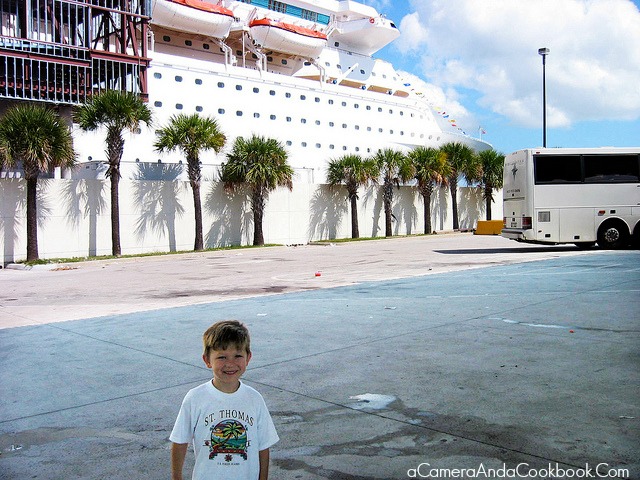 After boarding we went to the Windjammer Cafe and had lunch. We hung out on deck and waited to do the mandatory lifeboat drill at 4:30. At 5:00, we set sail for Nassau!

Since this was the first cruise with Drew , we checked out the kids’ program, which we found to be very disappointing. The age group he was in was 3-5. As an educator, I found this to be ridiculous. Especially for kids like mine, who would be bored coloring and playing with blocks when they go to the kids acitvities. Heck! He could do that with us just as easily, but that’s the point. He would be bored. Oh, I won’t go into all the details of this, but I’ll just say this was just the beginning of Royal Caribbean making us feel like we’re JUST the incompetent customers!!

That evening we attended the Welcome Aboard Show starring Jan Downs. Afterwards, we put the little one to bed and headed out to the piano bar. 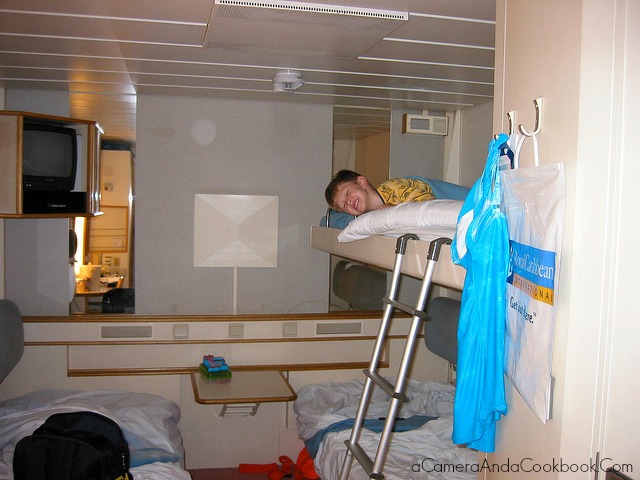 Here he is the next morning dressed and ready to go, but it was so much fun to play on the pullman. We had an interior room for the first time. This was also our first time on Royal Caribbean. One thing we really missed about Carnival is the larger cabins. We’d also never been in a cabin without a port hole or window, which may have contributed to the feeling of being cramped! Drew slept on the pullman, which is bed that folds into the wall. This helps when you put it up during the day to give the room a feeling of openness. The little table between the 2 beds folds up too.

Our first full day was spent in the Nassau, Bahamas. We actually had an excursion over to Paradise Island to Atlantis Resort. Since just a few months before Rob and I had enjoyed a 7 week cruise with a stop in Nassau, we had already experience the awesomeness of Atlantis. We knew that Drew and Rob’s Mom and Step Dad would really like Atlantis and the aquarium there. Eating at Atlantis is not cheap. We looked at several menus there and decided to walk back to a restaurant we saw when walking to Atlantis called Anthony’s Bar and Grill. This was first time to have conch! Since I was pregnant, I only had a small bite. It was yummy and I highly recommend you try some if you’re at a place that serves it. 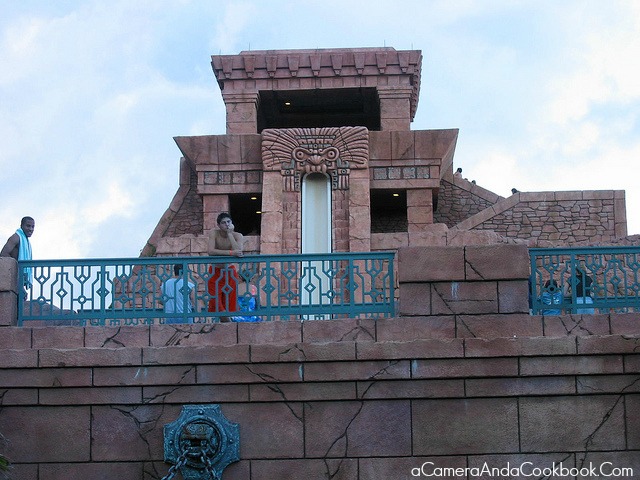 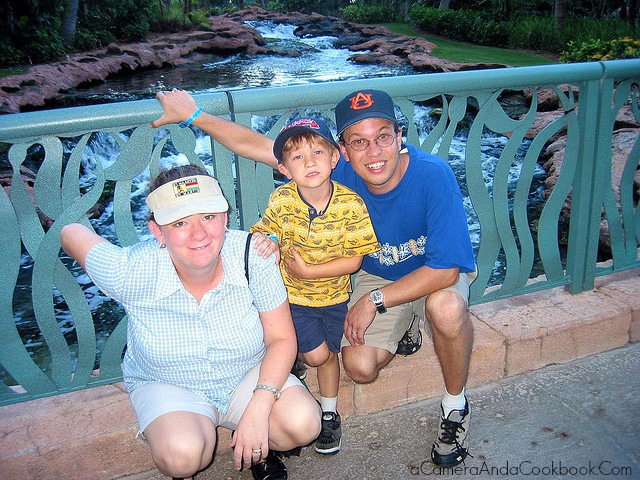 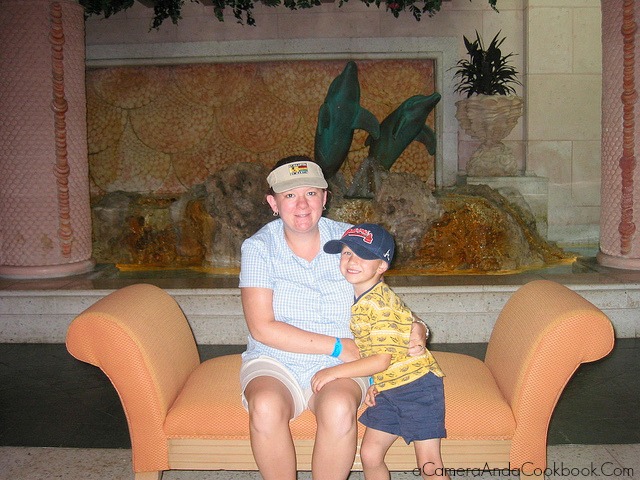 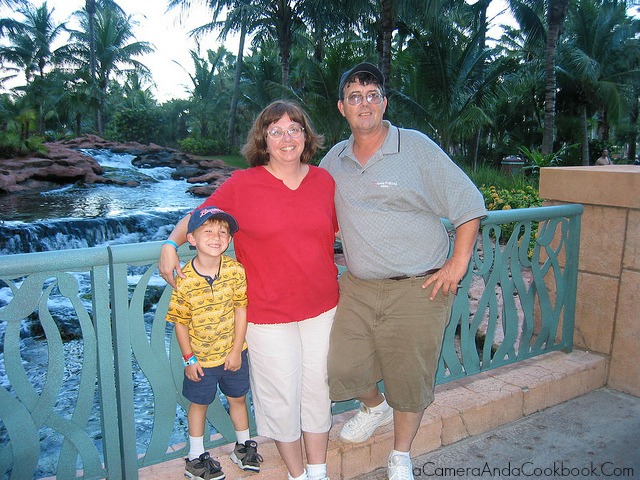 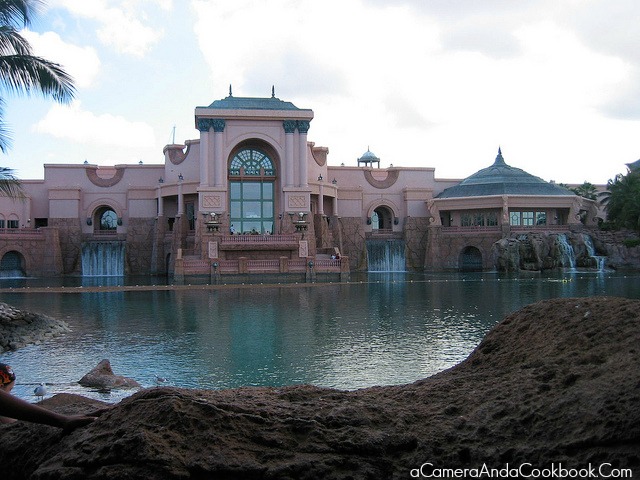 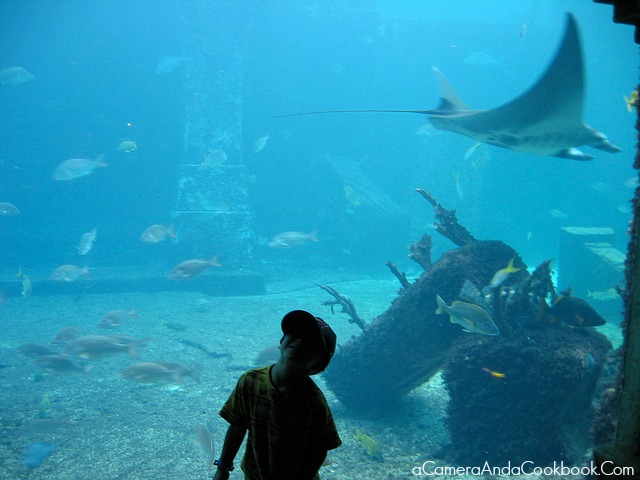 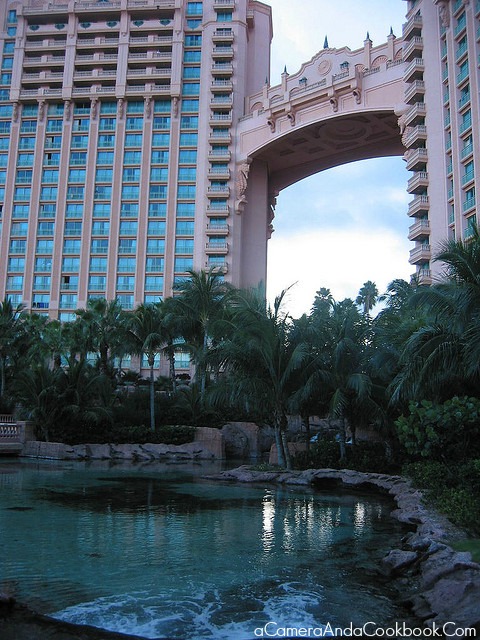 The next day, our stop was at Royal Caribbean’s private island, Coco Cay formerly called Little Stirrup Cay. The really awesome thing about going to “private island” when cruising is that the cruise line owns that island, which means:

We’d never been to a private island before and we knew after a busy day in Nassau/Paradise Island we would be ready for some relaxation. We found a quiet area by this cover with very calm waters. Rob and his Mom enjoyed the speciality drink there, called the Coco Loco. Since I was pregnant, I got a virgin one and it was so yummy! Read about Coca Cay. Here’s an article about all private islands that are owned by cruise lines. 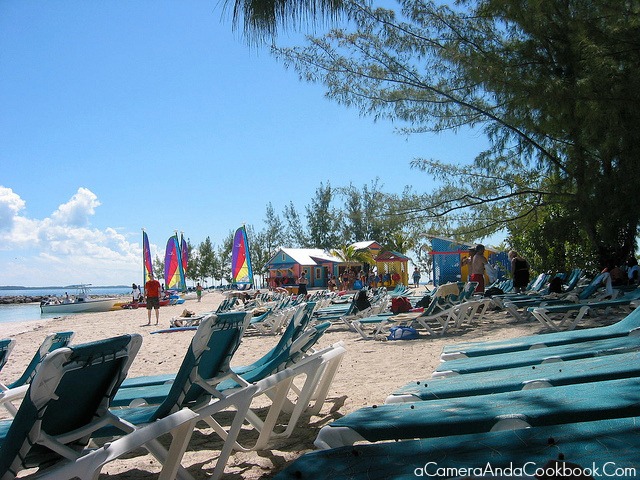 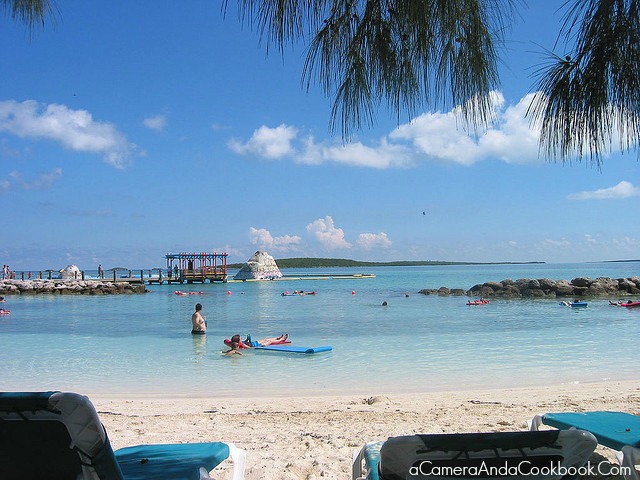 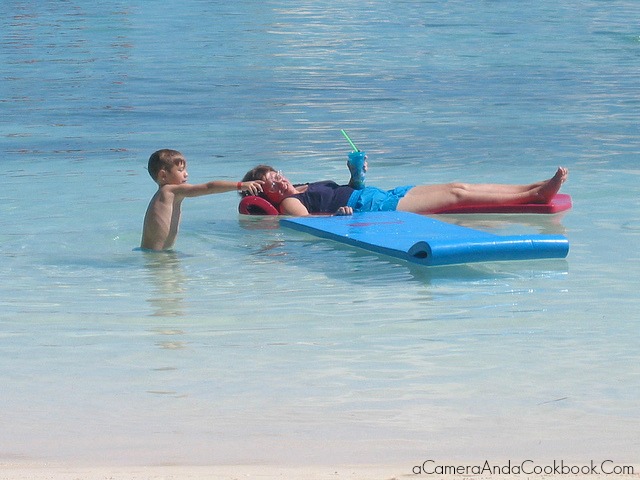 You do have to tender into the island. Here’s some pics as we get ready to tender back to the ship. 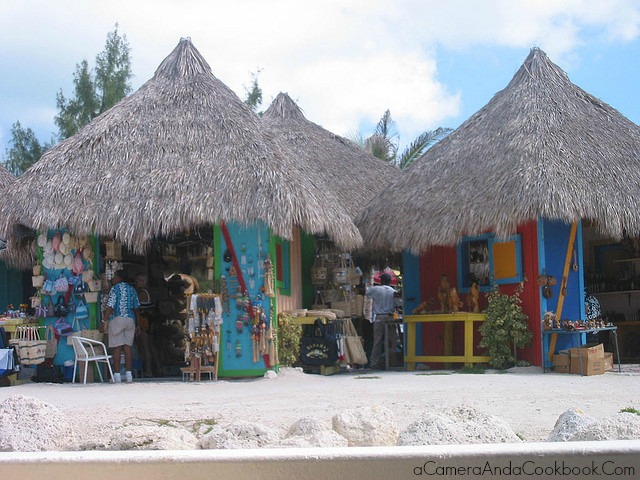 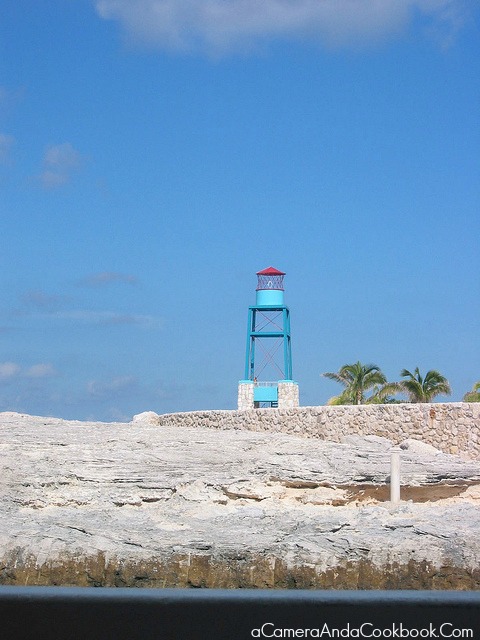 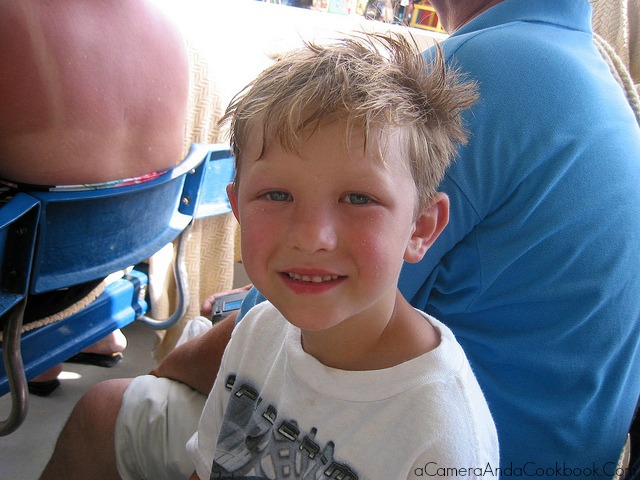 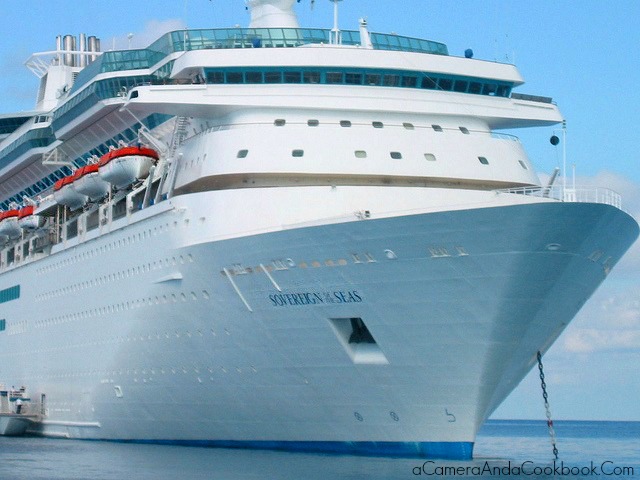 After returning to the ship, we hung out on board. Then, headed up on deck to watch us leave the beautiful island and head towards Port Canaveral. 🙁 That evening we ate a wonderful dinner and went to see the Farewell Showtime. The next morning we were back at port and time to head home.

I can’t write this entry without saying that Royal Caribbean’s service did not live up to Carnival or Celebrity at all. We had a room steward that was never reachable, when in truth, we have never had to call a room steward. He never replaced our dirty towels one day. In fact, the 2nd night on board, I stood out in the hall way in my gown looking for someone to help, because our toilet would not flush and had started overflowing. And the already mentioned saga about the kid program. All of this could have been made better if the staff actually seem to care that we were not happy with several parts of the cruise. We filled out the survey at the end of the cruise as we always do, but this time we did not have many positive things to say. I really wonder now if those are even looked at, since we thought that for sure we would get some type of letter of concern or at least acknowledgement after cruising with RC. We never did…

Would I go on Royal Caribbean again? Yes, but only if it was a much better deal than any other cruise.

See all the photos from this trip here.

You can see all my cruising posts listed on my Cruising 101 Page.