We recently took a trip to Atlanta over the 4th of July weekend for a little staycation. We got the City Pass, which kept us busy the 3 days we were there at a discount rate. Our first attraction was the Georgia Aquarium. We went to the Georgia Aquarium back in 2007, but that was before they expanded so it was exciting to see all that has been added. 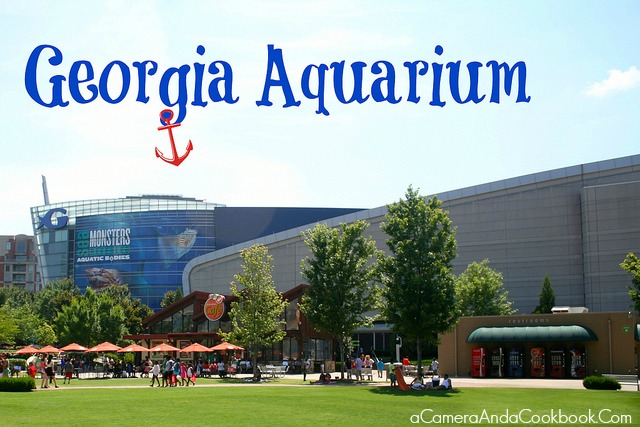 There are 6 exhibits, a live dolphin show called Dolphin Tales, and a 4D movie called Deepo’s Undersea 3D Wondershow. You can find a map of all the exhibits here 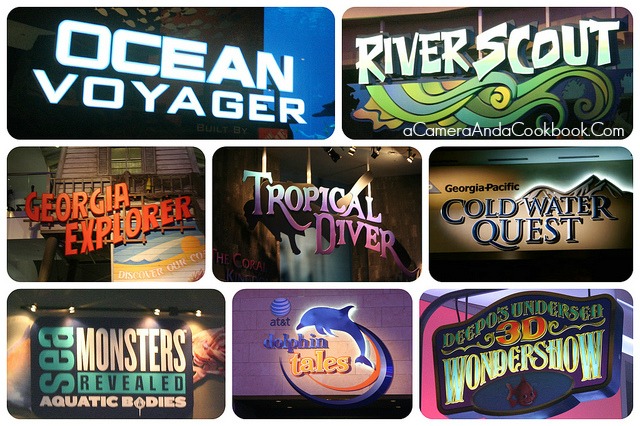 At the Cold Water Quest exhibit you’ll see a collection of animals that live in the cold environments, obviously. Here you get to see the 4 Beluga Whales (Grayson, Qinu [Kee-nu], Maris, and Beethoven) as well as Harbor Seals, Giant Pacific Octopus, Sea Dragons, Southern Sea Otters, and African Penguins. You get the opportunity to touch sea urchins and star fish in the Rocky Shore Tidal Pool. 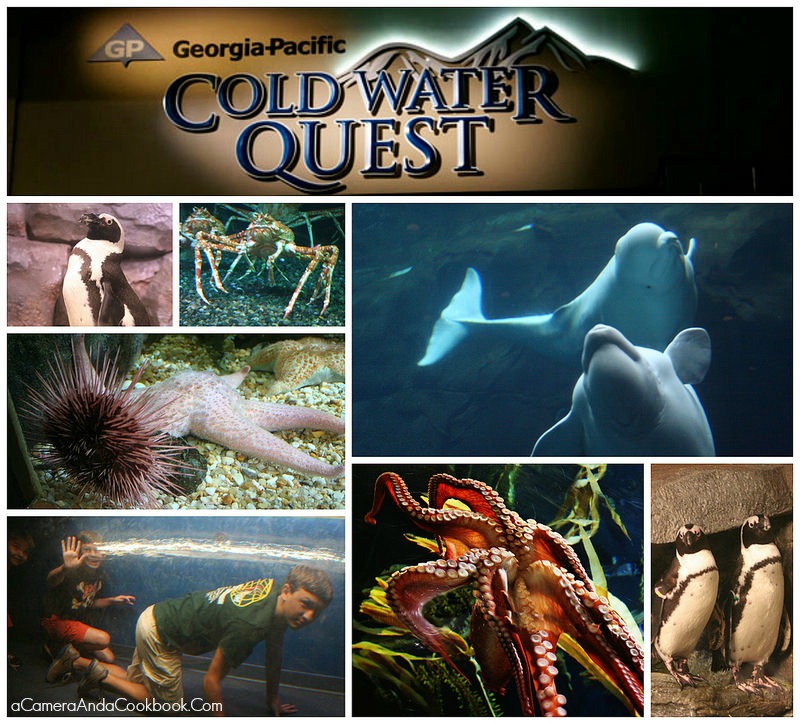 In the River Scout exhibit, you’ll see animals found in the rivers of Africa, South America, Asia, as well as Georgia. One of the really cool animals you’ll see is the American Alligator that is an albino. How often do you get see one of those? The exhibit also features Amazon Exotics, African Cichlids, Archerfish, Freshwater Turtles, Piranha, and Asian Small-Clawed Otters. 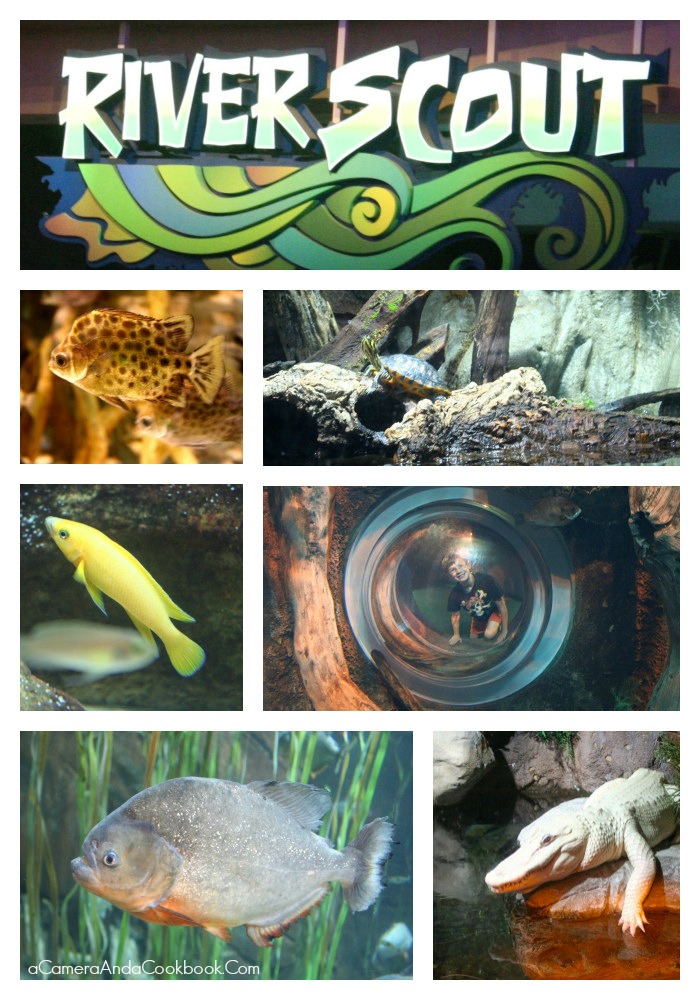 The Georgia Explorer features Loggerhead Sea Turtle, Grey Triggerfish, Pencil Sea Urchin, Arrow Crab, just name a few. One of the coolest fish I saw the entire day was the Red Lionfish. I was able to get some really pretty pictures of them, because they didn’t move much. 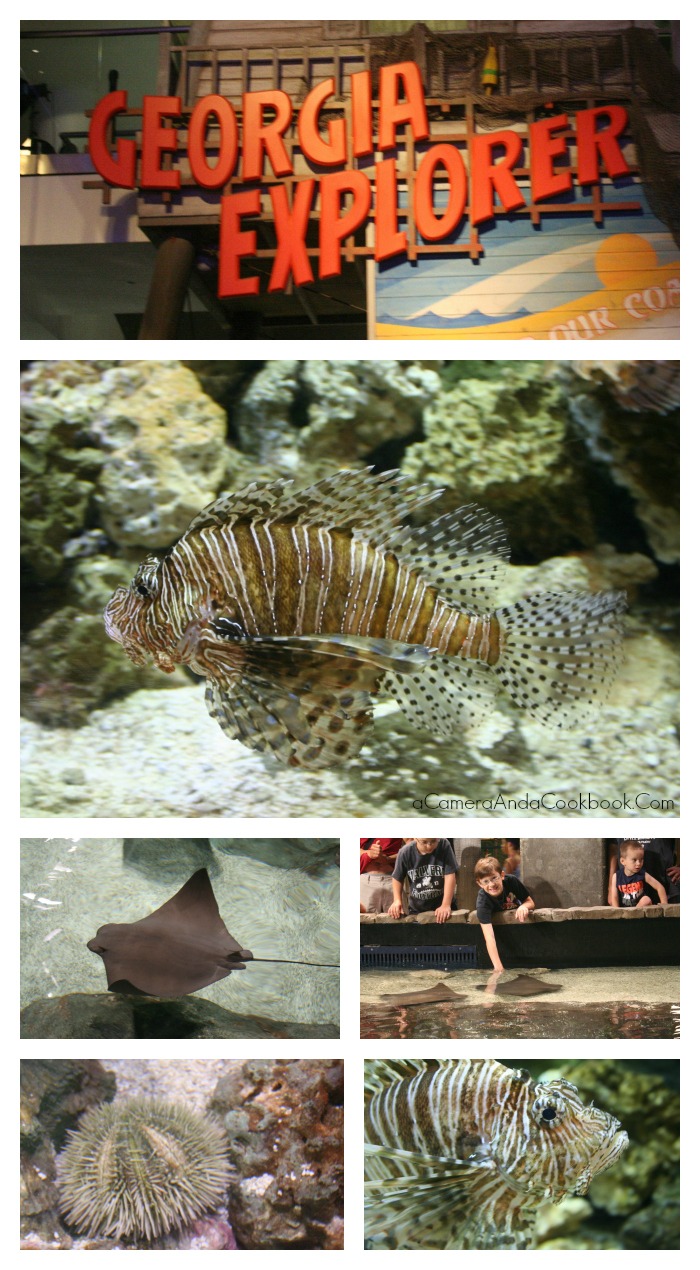 The family enjoyed the shark and ray touch pool in this exhibit. 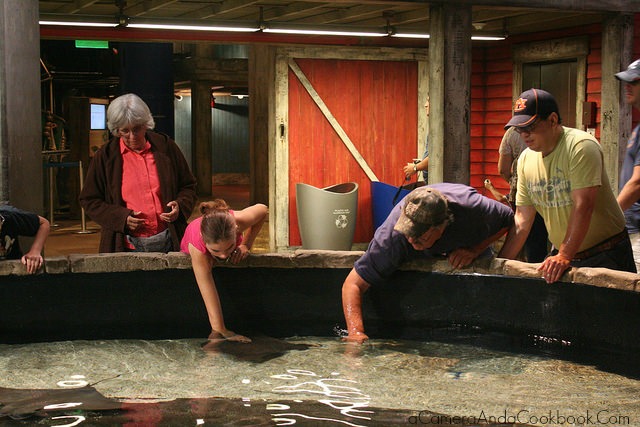 The Tropical Driver exhibit demonstrates many different habitats that house Seahorses, Garden Eels, (Rob’s favorite), Clown and Anemone, and much, much more.

In the exhibit called Sea Monsters Revealed: Aquatic Bodies, it takes you out of the world of living exhibits for something a little different. We learned a great deal about how the bodies of sea animals were created to live in the deep blue seas. The creators of this exhibit took these amazing (deceased) sea creatures and preserved them by using a revolutionary polymer preservation technique known as plastination. 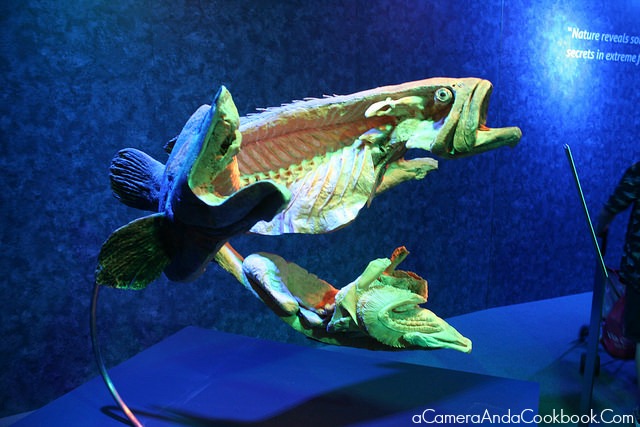 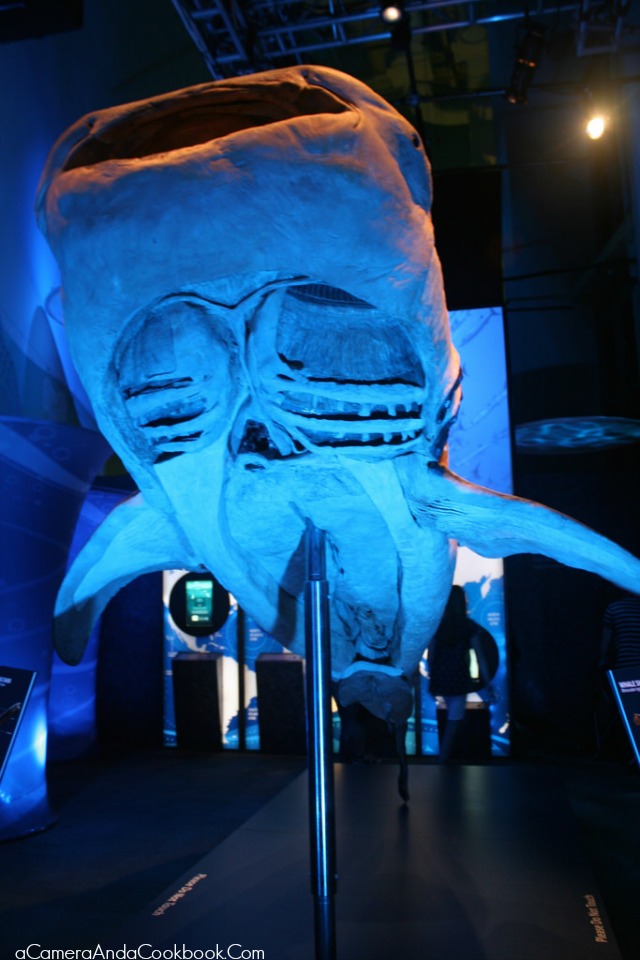 Lastly is the Ocean Voyager exhibit which was for sure my favorite. Here you’ll go through the exhibit tunnel, where you’ll be surrounded by fish swimming by and even overhead. You will see Sting Rays, Blacktip Reef Shark, Blue Runner, Giant Grouper, Longcomb Sawfish, Sandbar Shark, Zebra Shark, Hogfish, and 100’s of other species of fish. 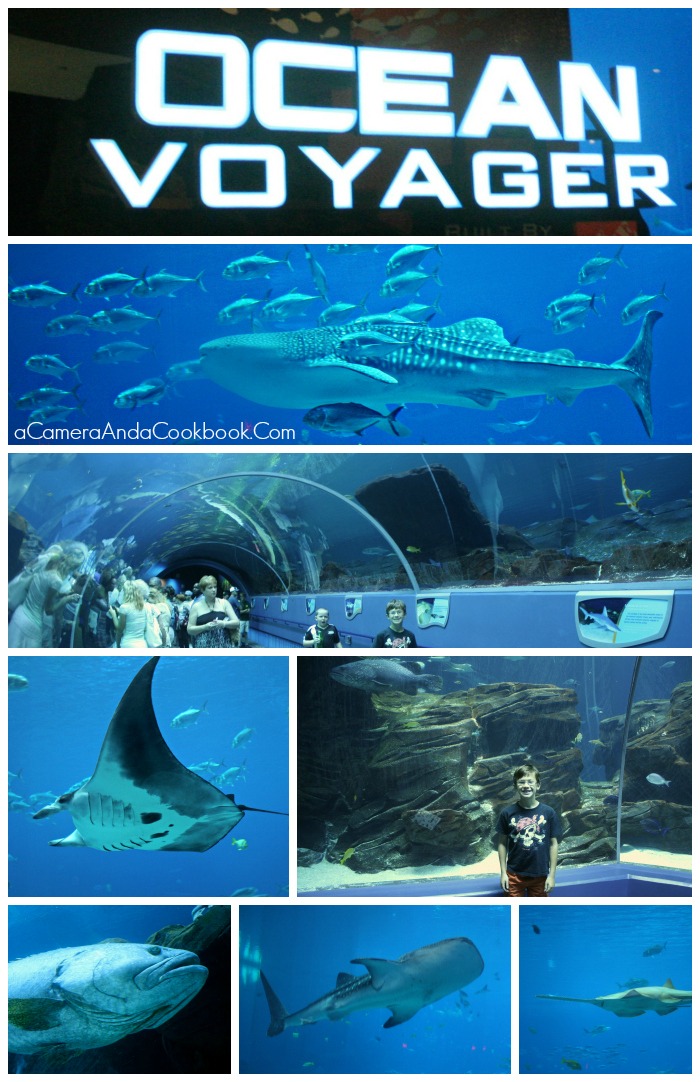 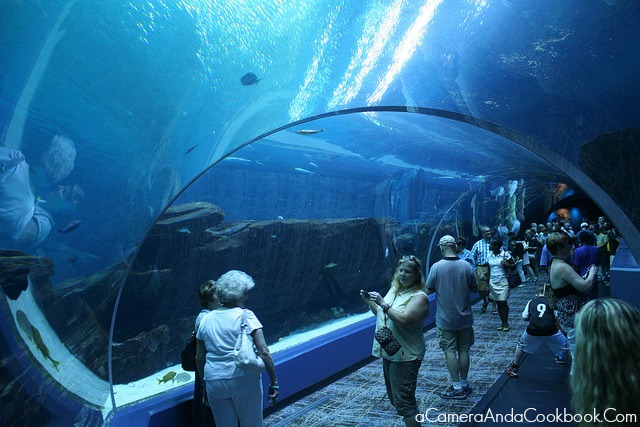 This exhibit houses the world’s largest indoor aquatic habitat and when you go into the room with the towering glass wall, its just amazing to watch 4 Whale Sharks along with Manta Ray and 100s of other fish. Absolutely breath taking. 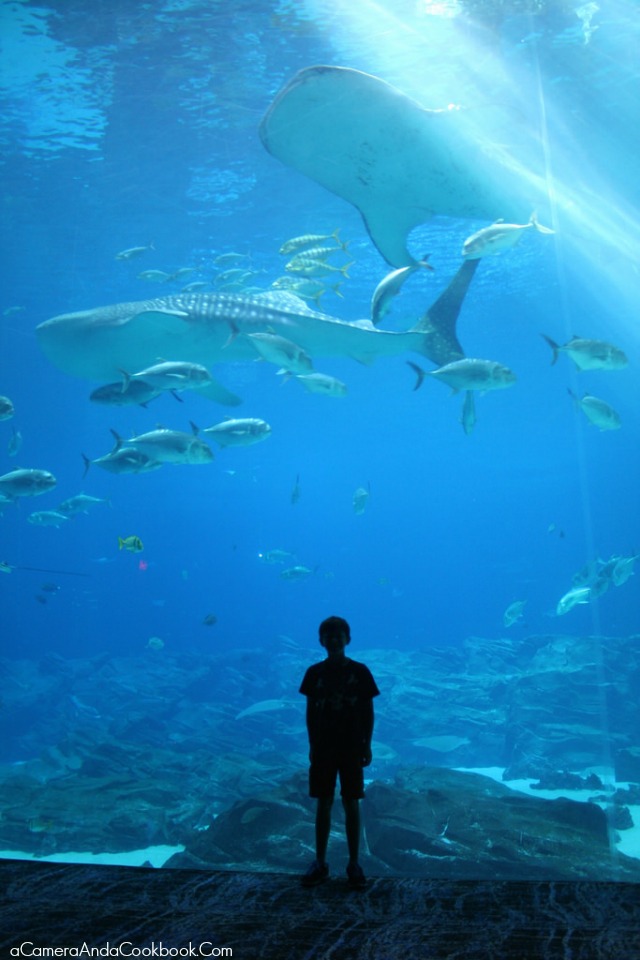 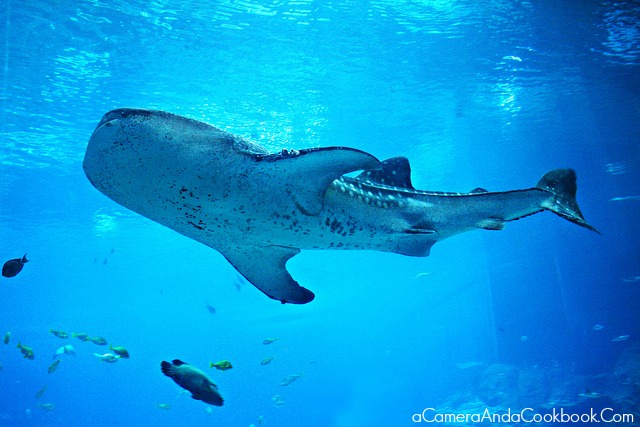 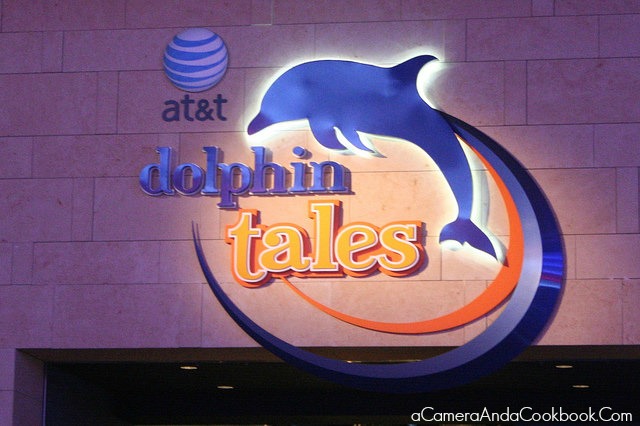 The dolphin show was pretty cool too. I was surprised that it had a broadway-like-singer, with the dolphins coming out set to a story with music and lighting effects. A little silly and over the top, in my opinion. I would have been more interested in hearing about the dolphins and learning more about their training, etc. The reason you don’t see any pictures of the dolphins or the show is because you are not allowed to take pictures or video.

If you plan to go to the Georgia Aquarium, you can eat at the Café Aquaria. However, I’d recommend going to the information desk and get your ticket stamped for re-entry. When we were about three-fourths of the way done seeing everything we decided we needed to stop and eat lunch, so we walked over to the CNN center. The CNN center has a wide variety of places to eat in their food court.

When planning a trip to the Georgia Aquarium, I would recommend at least half a day. If you’re with a group bigger than 4 people, definitely plan for longer. Or if you’re like me, I wanted to go back to a couple exhibits and see part of the exhibit a second time around. I mean you’re paying all this money might as well get your moneys worth, right? And definitely plan to get there early. The best times to be there are early in the day and late in the day after the crowds die down.

The Georgia Aquarium is a must see! So next time you’re in Atlanta, don’t pass it up! 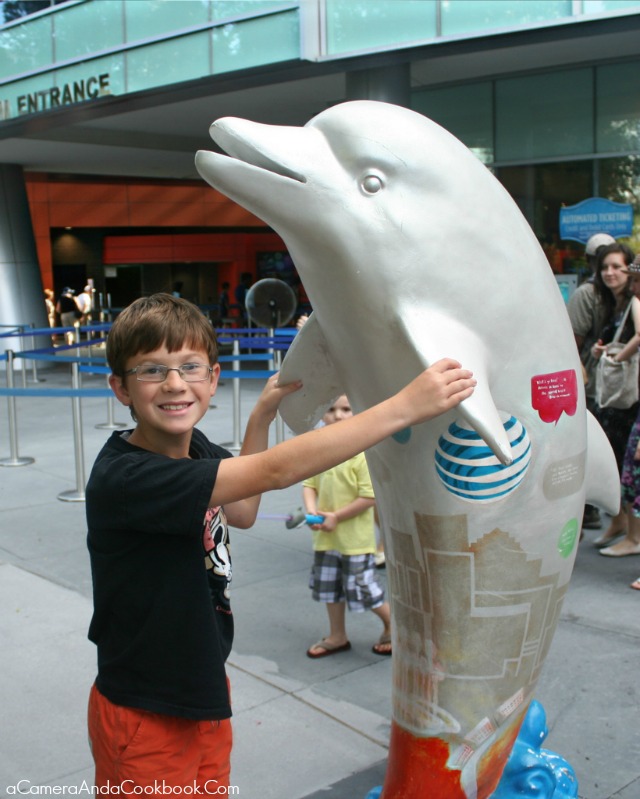 See more pics from our trip the aquarium here.