Saturday morning Rob and I got up early, dropped Drew off for his hiking trip, and got to the Atlanta airport. Everything went really smoothly, parking the car, checking our luggage, going through security, so we had time to grab some breakfast. We decided crepes at Freshens. Really yummy! 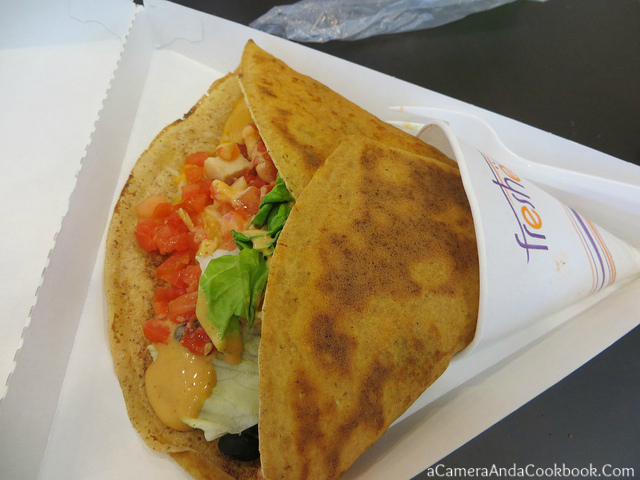 We flew Spirit Airlines out of Atlanta to DFW. So much was running through my mind when we got on the plane, so I just ended up closing my eyes and sleeping most of the flight. Dad called me once we got off the plane and were waiting for the rental car bus. He said he was getting in the shower and hoped to be out by the time we got there with directions of how to get in. I was a bit surprised he was still in there nearly 40 minutes later. When he came out in his bathrobe, I was a bit taken aback by how thin he had gotten just since July when we last saw him.

We enjoyed several hours of chatting and catching up before he suggested El Chico for dinner. While he was getting dressed he wanted me to look at his back to see if really appeared that thin. It didn’t look that bad, but I could see how exposed his spine was. Watching him struggle to just put his shirt on just broke my heart a little more. He used a cane to help him walk into the restaurant. I was amazed at how he ate everything on his plate and then when I handed over the dessert he proceeded to finish that off as well. I’ve never seen my dad devour a plate of food quite like this before.

As we ate our dinner, we discussed such enjoyable topics from who gets what when he dies and the fact he’s going to be cremated. I was actually proud of myself for handling everything without breaking out in tears. I think it helped that my Dad is handling so much of this so light-heartedly.

After dinner his friend, Crystal, came by and we got to meet her. Although they’re just platonic friends, they have a close bond and she’s really been there to help him through the last 3 weeks that has brought drastic change in his body and his ability to do many things. She even drove him all the way out to Colorado. My Dad’s health insurance is in Colorado, so he had to go there to see the neurologist.

I guess in my first post about my Dad, I didn’t lay out the details or the timeline really. For my memories’ sake I’m going to do that here:
Sun., Nov. 17th – got an email from my Dad asking me if we were planning to come to DFW for the holidays? I responded back saying no, yadda yadda yadda. He responded saying that we’d touch base soon.

At that point, I was a little excited, because I thought that maybe he was thinking of coming to spend Christmas with us in Auburn. Boy, was I in for a shocker when I did talk to him.

Tuesday, Nov. 19 – Dad had called while I was at work, so I decided to call him back during my dinner break. It turned out I was meeting Rob, the boys, and my BIL at Country’s BBQ for dinner, so I called my Dad back as soon as I hit the door while walking to my car. He didn’t sound great and proceeded to say his health had been declining. He was slowly easing me into what was actually going on. After he told me he had ALS, he proceeded to tell me that he didn’t want me to say anything on Facebook, because he didn’t want his brothers to know. He’s had falling out and wanted to be able to tell them himself. He told me he had another test on Thursday and another test Wednesday before Thanksgiving. He said he thought he had anywhere from 1 year to 1 month to live, just based on understanding what had gone with his body in the last few months and especially the last couple of weeks.

Thursday, Nov. 21 – He texted me to let me know the diagnosis was made that he did for sure have ALS and that no other test would be needed. I decided to call him to get the facts and to understand what the plan was. When I called he said he didn’t have a plan. He could take a pill that would prolong his life by a couple of months, but truly he’s suffering and didn’t want to do anything to prolong life. No tubes, no breathing tubes, no feeding tubes, no meds. Just pain pills. He told me he really didn’t think he’d live into the new year. I became really upset when I thought more and more about what he said, He was having a hard time breathing, saying 3-4 words then taking a deep breath, so he could say 3 or 4 more words and then repeat. He also said he was having a really hard time just walking to the bathroom and that the left side of his body is much weaker. He’s unable to lift his left arm above his head.

That night at work I chatted on Facebook with my friend, Michelle, who’s Dad died from ALS. I talked to her about my Dad’s test results and about what the last things were to happen to him before he passed. She recommended that I go see him even though I had it in my mind that I didn’t need to see him again since we had such a great visit in July. So then I sat at work and started looking at flights to DFW. I also wrote the The saddest post I’ve ever had to write.

Friday I told Rob I wanted to fly out to DFW that weekend. At lunch we decided and arranged for the boys to be with my BIL while we were gone, since he could stay at our house and they could still do their weekend activities. I asked Dad if it was ok for us to come visit for the weekend. His response, “Absolutely!” Made me so happy. We booked our flight and reserved a rental car.

Ok, so now back to details of the trip. Saturday night we ended up staying till 8pm or so and then decided we better head over to Granny’s since my Mom was waiting on me. We enjoyed some cookies and milk with Granny and chatted with my Mom for an hour or so, then headed to bed.

Sunday morning we had planned to go to church with Granny, but when we woke up, she said she had been coughing and plus the weather wasn’t that great. We went ahead and got up. We went to a nearby bakery and then went over to Dad’s, bringing him some kolaches and a Dr. Pepper. We visited, continuing to hear stories about Crystal and his work and his brothers and Jason and other stuff. Rob and I had discussed at breakfast that this was the day I needed to say anything that I wanted to make sure my Dad heard before he dies. I had a really hard time swallowing that. I think this entire weekend, I was in a bit of a fog and really wasn’t thinking that clearly. It’s not everyday that we prepare for a loved one to only have a short time to live and to know what we need to say to them before it happens.

My Dad wanted us to drive an old truck he had recently bought. The night before he asked if we needed a truck, in which my response was that we could always use vehicles, especially with the impending birthday of our teenage boy. So we drove the truck to Kroger to get him some milk. We got back and told him that we liked the truck and could definitely use it. We talked more about his funeral, that he was going to be cremated and that he wants to be ‘set free’ in the Florida Keys. I joked that I was all over a trip to the Keys! I expressed that I’d like for him to have a visitation before he’s cremated. We discussed more details of his declining health. I also told him about the fact that I had shared the news with most everyone we know in Auburn and that so many people are praying for him. This is when we both broke down in tears, but only for a quick moment.

Rob took some pics of us together. This is my fav. 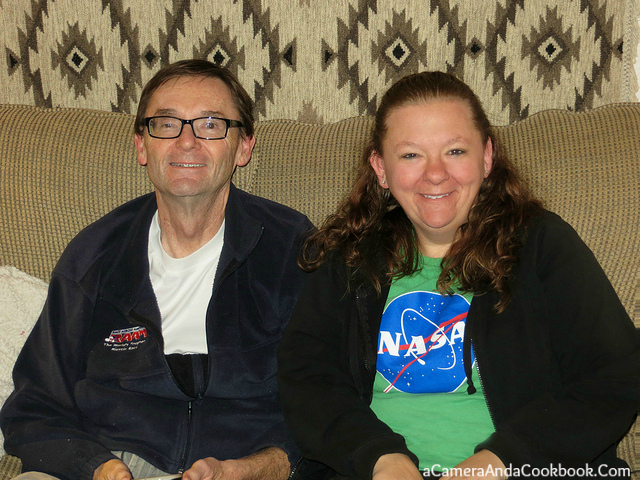 Saying goodbye that evening was just so hard, so, so hard. We hugged so tight and I just didn’t want to let go. He walked us to the back door and I hugged him again. He told me to take care of ‘those boys’ and that he was proud of me. In my upset state, I told him I was proud of him too and that I loved him. I guess that wasn’t as stupid as it sounded. I am proud of him for so many reasons. He’s never had an easy life, but that’s a whole nother post!

I’ll never forget that last embrace with him and just as I rubbed my hand over his back, feeling how thin and frail. Feeling his spine through his thick fleece, he was wearing. Just how completely bony he really was. Thinking about the how quickly he has progressed with this disease and remembering him talk about the fasciculations, muscle twitches, that he feels constantly. The misfirings of his nerves and as that occurs the nerves die. When the nerves die, they quit talking to the muscles properly and the muscles atrophy. The muscles die. I’ll never forget him struggling to his chair with his cane in hand and how he said, “I just can’t believe this is happening to me.”

I know this trip was our final goodbye until we meet again…in Heaven. I thought I would feel more at ease after this visit, but I guess it’s just not that simple. I can’t swallow the fact that I won’t see him again. It just doesn’t seem right. Just not right at all… 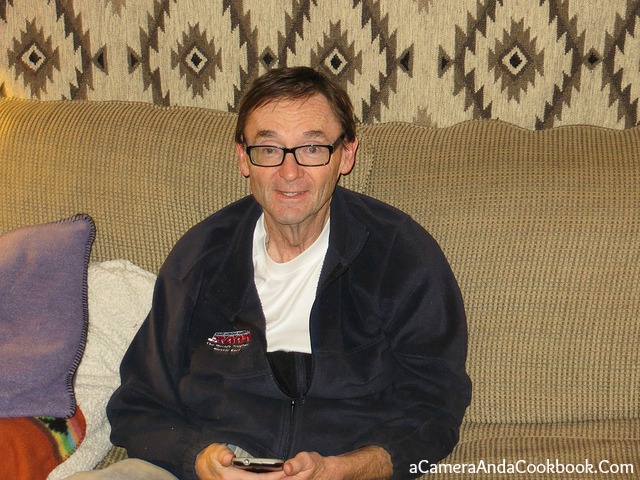