We woke up before the alarm went off and watched us dock at Antigua. We got dressed and went up for breakfast. We met some folks that cruise a lot. One of the guys has been on 75 cruises in 2 years. Oh the life of the retired…. It was interesting to listen to the 3 different couples talk about their cruising experiences and to hear what it’s like to be a Platinum or Diamond cruiser. Rob had Eggs Benedict wit OJ and I had pancakes, banana, bacon, and OJ. Rob isn’t used to eating breakfast, so he never eats too much. I however wake up famished.

When we finished up with breakfast, we went back to the room and got our bag ready for our excursion which was called Best of Antigua highlight tour. We chose this tour, because we’ve never been to Antigua and it would be a nice overview of the island. We got off the ship and had to wait a few minutes for everyone. We enjoyed listening to the steel drum band out on the dock, which is an extra perk of a Journey Cruise. 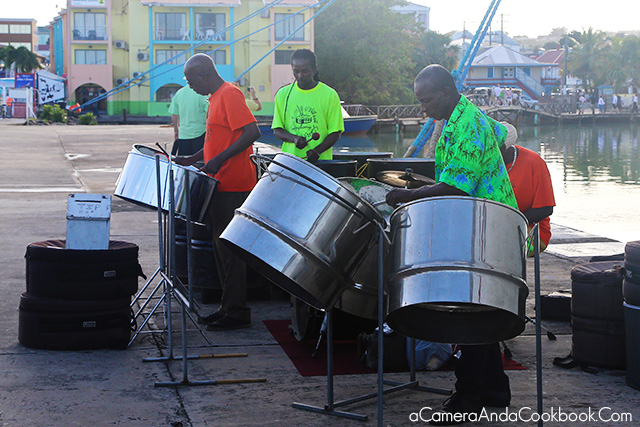 Once everyone was there we made our way to our air conditioned bus. Here’s nice shot of our ship as we walked to our bus. 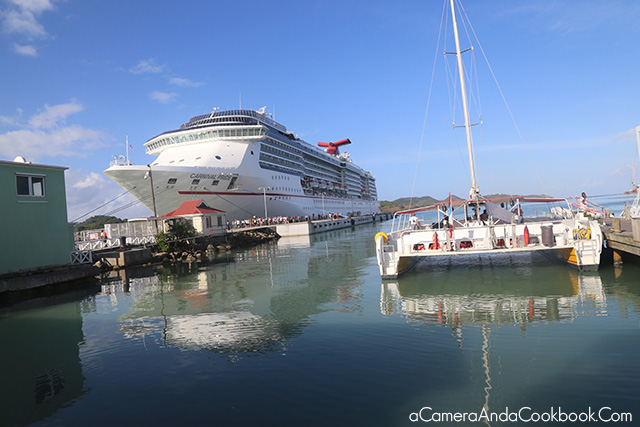 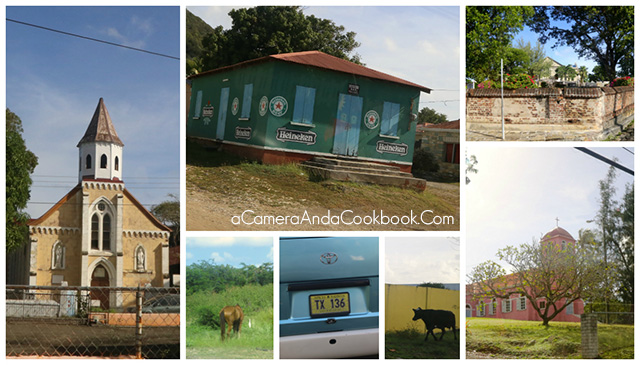 The tour included 3 stops: Blockhouse and beautiful overlook, Shirley heights, and Nelson’s dockyards. First 2 stops were about 10 minutes with about a 45 minute stop at the dockyards. Our guide’s name was Rohan who kept us engaged and interested.

Our first stop was at was a beautiful lookout spot, that is the home of the Blockhouse as well as other ruins. The Blockhouse was built in 1787 and stands 446 feet above the beautiful blue waters of the Atlantic Ocean. 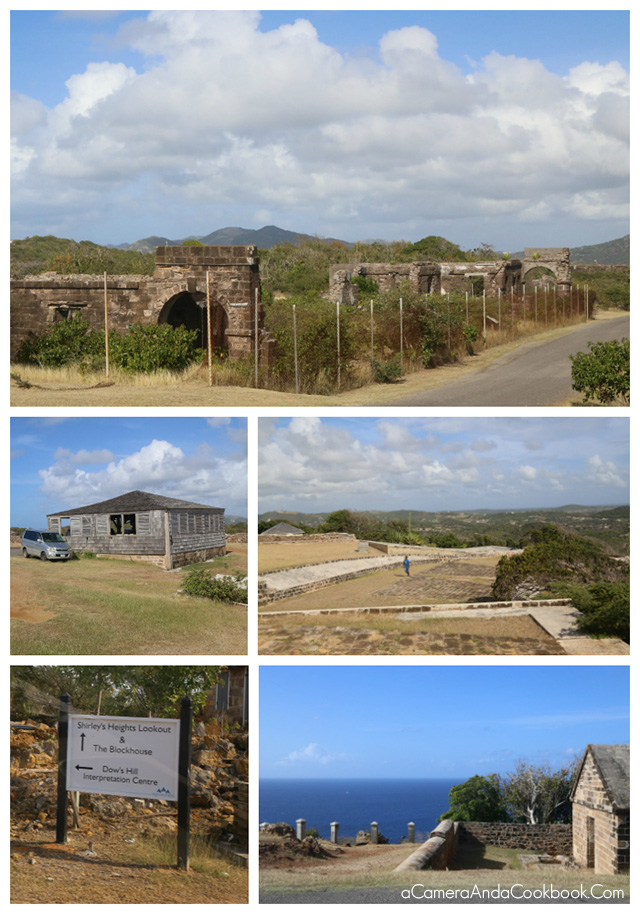 The guide pointed out the home of Eric Clapton, which is hidden on a peninsula just across the water. His 10,000 sq foot home that sits on 45 acres can be rented out for just $50,000 a week. Here’s a zoomed in look. 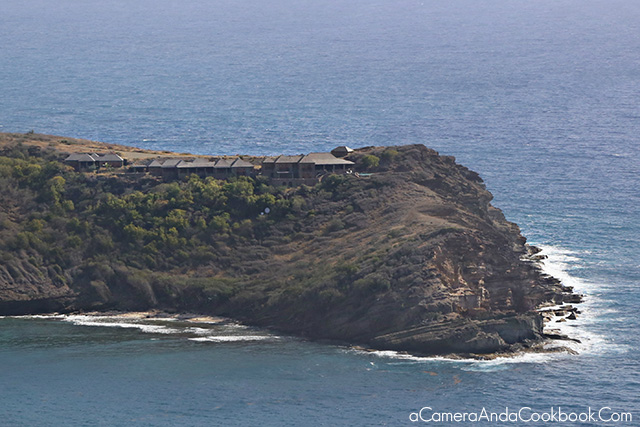 Here we are in a zoomed out shot with Clapton’s house just to the left of me. 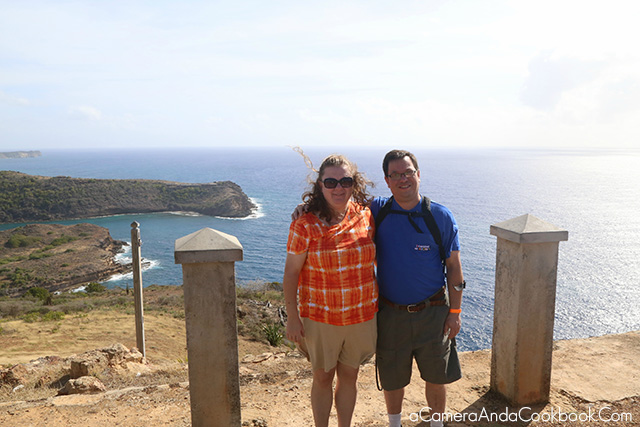 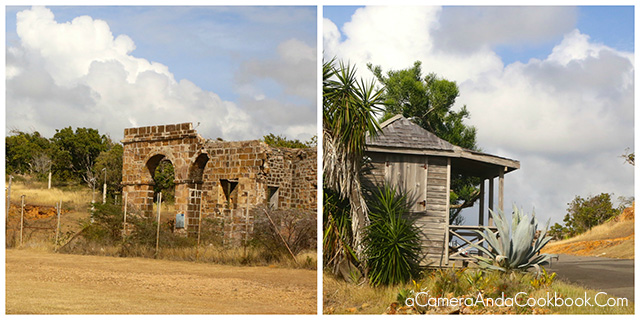 Our next stop was at Shirley Heights Lookout sits about 490 feet above sea level with crystal blue waters, boats, and islands. We could not get enough of the view over the English Harbour.

Shirley Heights was a military complex where a couple of the buildings have been converted into a bar and restaurant. 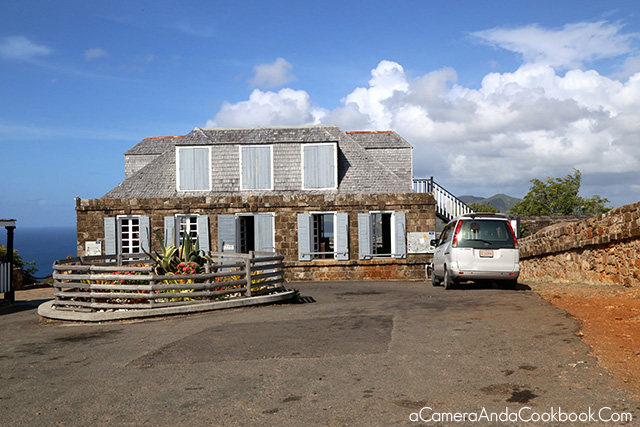 I enjoyed hearing about the colonial history from our tour guide. 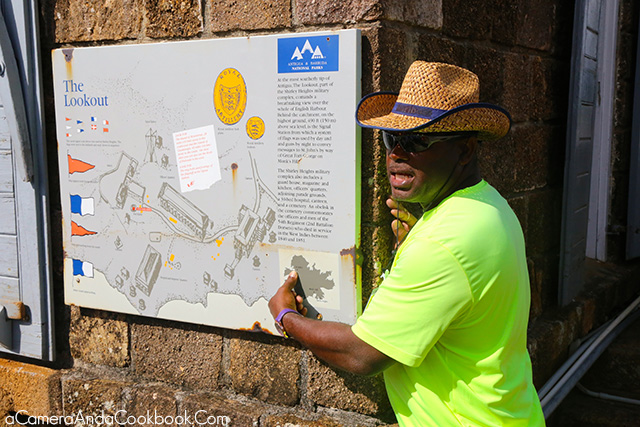 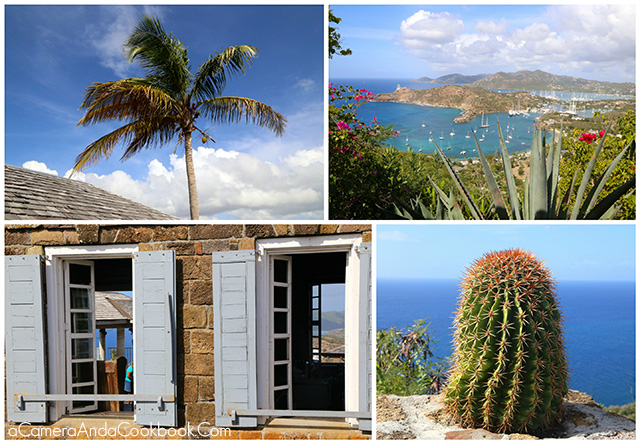 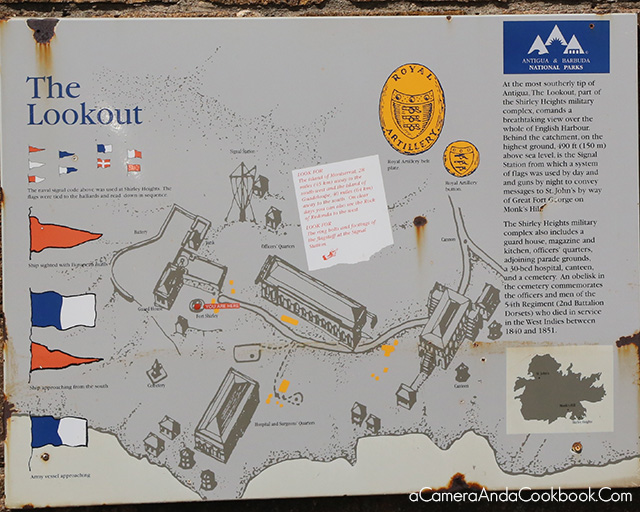 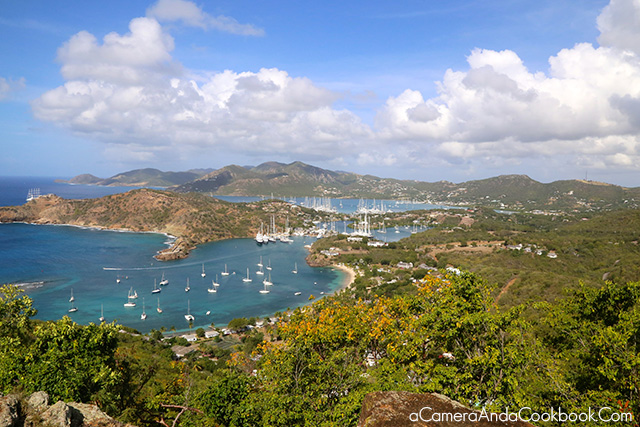 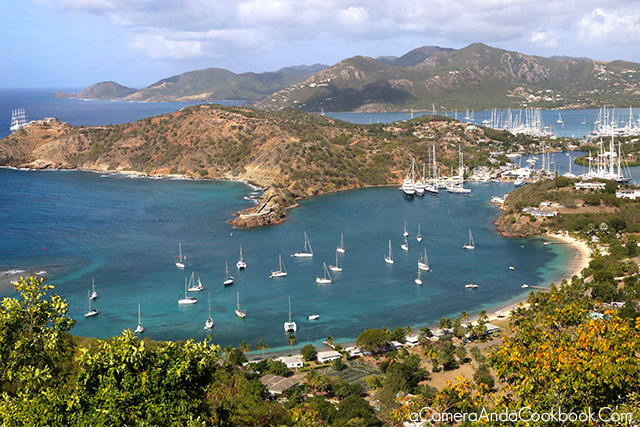 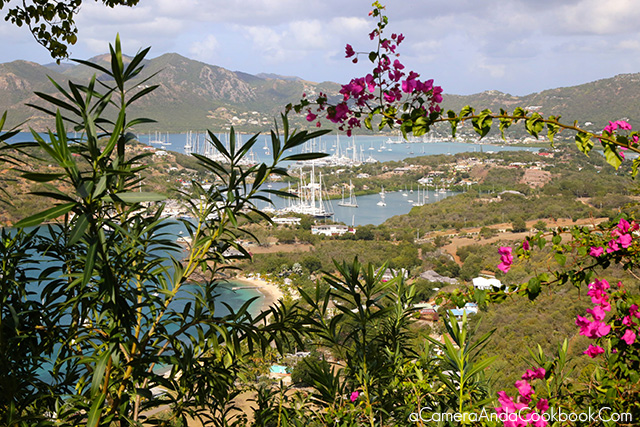 The final stop was at Nelson’s Dockyard, which is named after Admiral Lord Horatio Nelson. Built in 1725, it provided a base squadron of ships patrolling the West Indies. 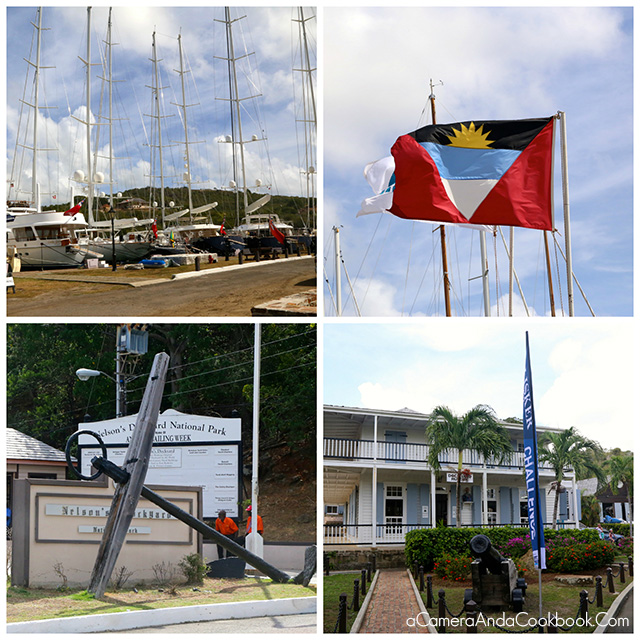 Once we entered the shipyard, our tour guide turned it over to a local guide. She entertained us with funny stories while pointing out the highlights of the shipyard. It is now been restored to a lovely colonial village that includes the Admiral’s Inn, museum, mystery pillars, bakery and the mammoth yachts. 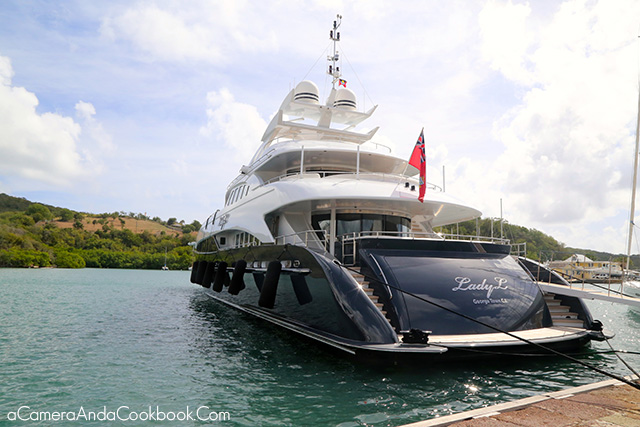 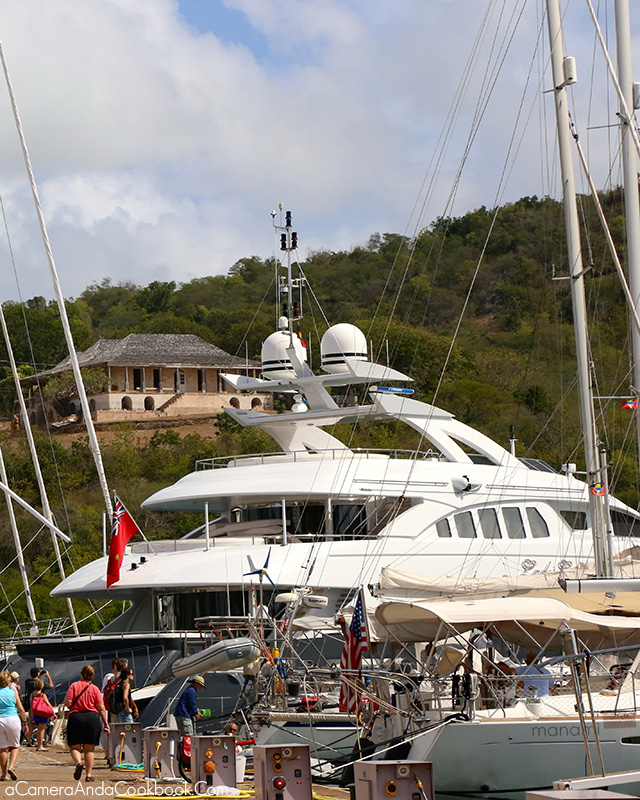 A complimentary beverage was included with the tour, which we enjoyed near the 18th century Inn. 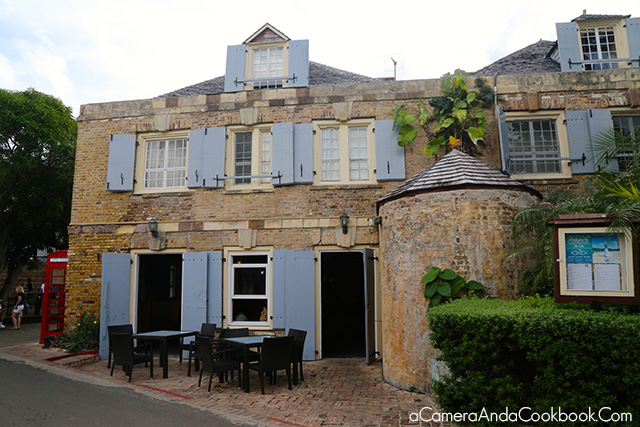 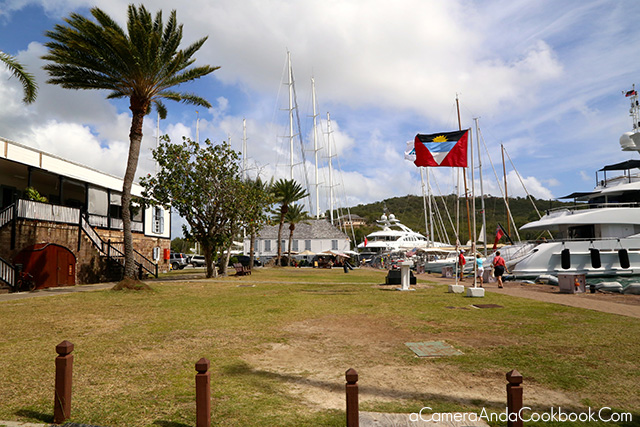 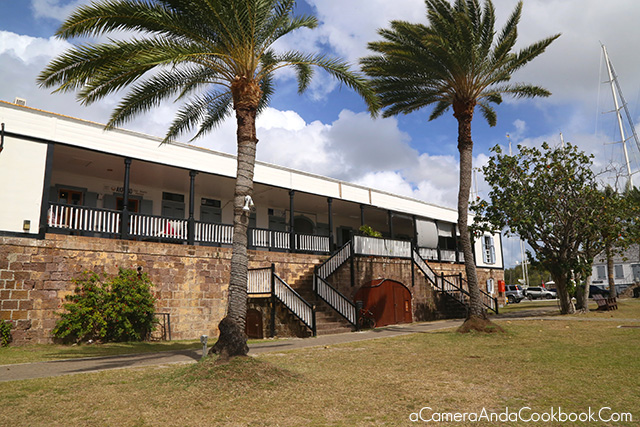 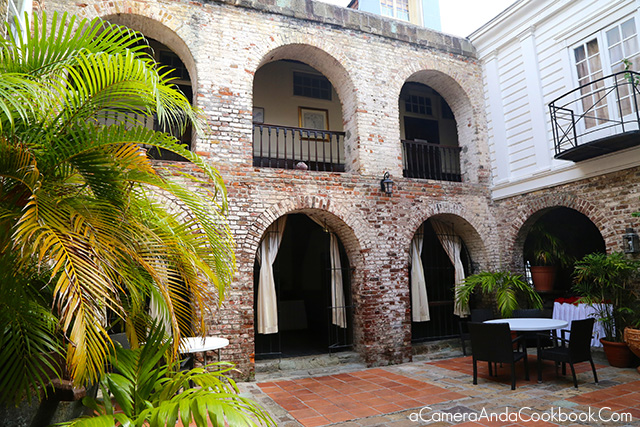 After about a 45 minute stay, we hopped back on the bus and headed back to the ship. Since the tour was only about 3.5 hours we still had more time to kill in Antigua. Rob and I got back on the ship to eat lunch and change into our swimsuits for a trip to the beach on our own. Since there are over 300 beaches in Antigua, you can’t go there without visiting at least one beach.

We ate at buffet bar called Chopsticks that had a few Chinese dishes. Chicken stir fry, chicken wonton, and asparagus stir fry. For dessert, we had lemon cheesecake with chocolate cake on the bottom, raspberry napoleon, and pistachio financier (cake). After that we disembarked one more time to find a beach to relax on.

Something about these Caribbean islands, I’m really starting to get tired of is having to deal with taxi drivers. They are all so expensive. We ended up paying $24 for a 10 minute drive over to Dickenson’s Bay Beach. This was not our first choice, but the other beaches are further away and would have cost $40+.

Dickenson’s Bay Beach was nice. Living so close to Florida, we’re spoiled by having amazing beaches just a few hours away. This beach had a walk up restaurant and bar and chairs and umbrellas for rent. We got 2 chairs with an umbrella for $20. 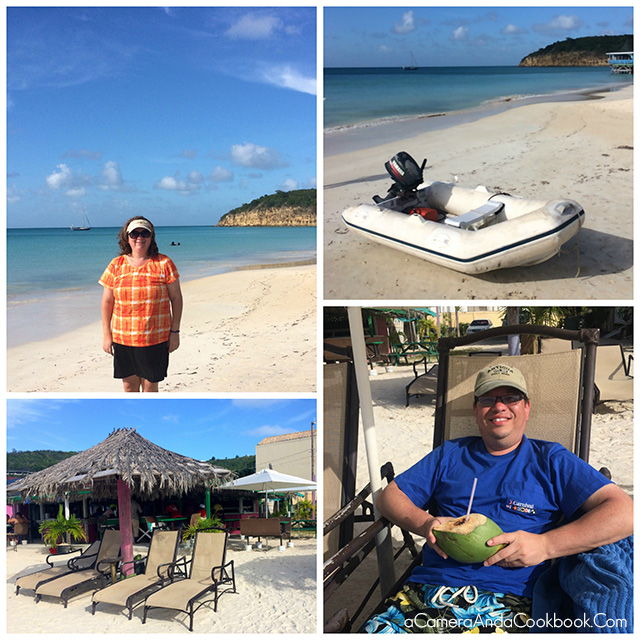 There was a guy walking around with a wheelbarrow selling fresh coconuts for just $5. He chopped part of it off with a machete and put a straw in it so we could drink the coconut milk out. 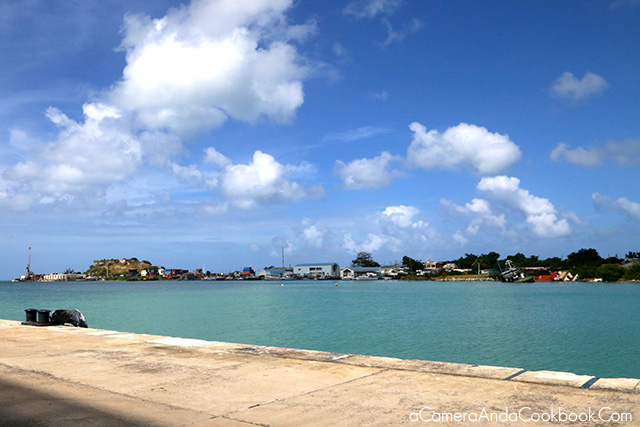 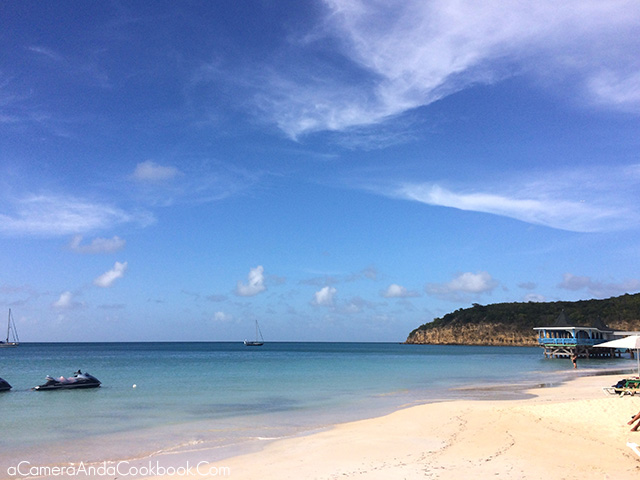 Just a little ways down the beach was a Sandals Resort. We walked by to check it out. There was a local with a table covered in necklaces and bracelets of all sorts. I ended up getting the boys a necklace each and a bracelet for me.

After hanging at the beach for a couple of hours we took our taxi back to the cruise port.

Upon embarking back on the ship, I got a shower and we napped until time for show time. The show for the night was called Getaway Island, which was over the top cheesy. Then, on to dinner where we had a quite dinner by ourselves, because our table mates skipped out on dinner. Rob tried 2 new delicacies; Rabbit as an appetizer and Lamb as his main course. He also had Caesar salad, Beef skewers from Antigua menu, Coconut cake, Flan, Strawberry Financier (yes, 3 desserts). I wasn’t as daring. I had Caesar salad, Beef skewers from Antigua menu, Vegetable spring rolls, Ziti with ham, cheese, and peas. I had 2 desserts Blueberry pie(recommended by one of waiters G) al a mode and of course,
Chocolate Molten Cake al a Mode. 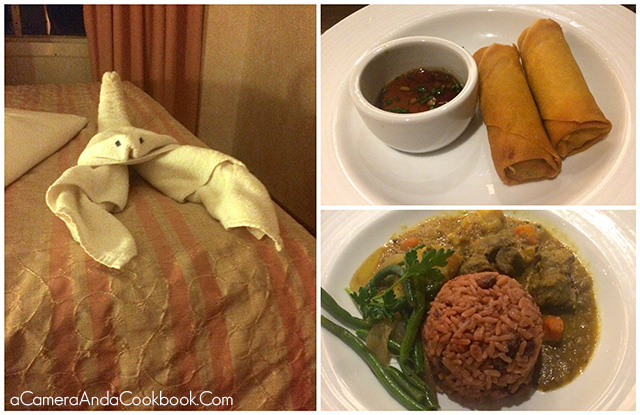 After dinner, we caught the tail end of an adult only comedy show and stayed for another show with a different comedian.

Here’s more pics from our day in Antigua.

Click to read more about our 10 Day Southern Caribbean Cruise on the Carnival Pride!