This Christmas season was had many differences for us. I felt behind pretty much until Christmas Day. What got me behind is that I was in charge of a big party for our scout troop, which occurred on Dec. 15th. We did get our house decorated early December, which was good. However, usually the week before I get out of work, I get all my treat making/baking done and we do a good bit of our shopping, but that was the week of the party. So none of that happened then. So the week before Christmas, my anxiety took over and I constantly felt panicked because I just wanted stuff done.

Rob and I get 2 weeks off at Christmas, which is lovely and thank goodness for it. We are always so busy on the days off leading up to Christmas. This year of course felt even more rushed and busy. I managed to get the 2 favorite Christmas treats made. These Pretzel Delights, which are super easy. 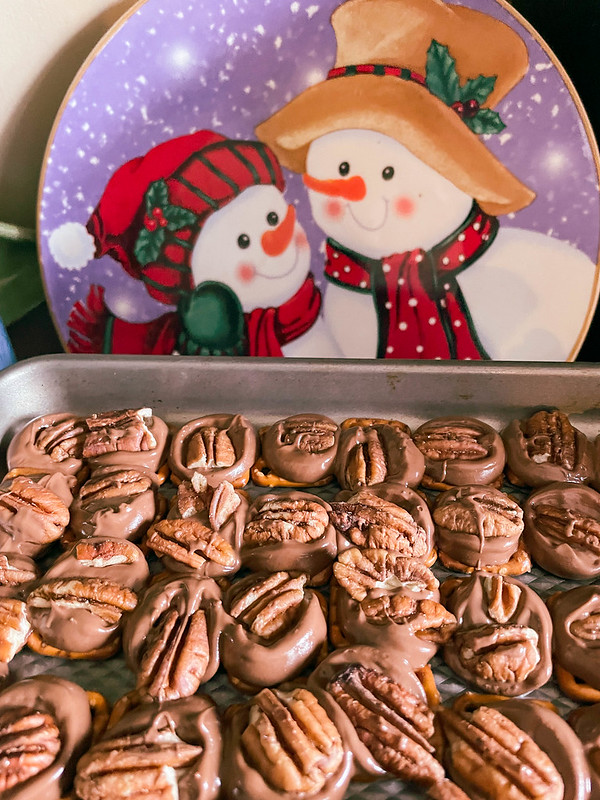 I wasn’t going to do the Chocolate Covered Peanut Butter Crackers, because those are my absolute favorite and I knew I would have a hard time resisting them. However, Rob got a sad face when I said I wasn’t going to make them, so I did. I didn’t make nearly as many as I usually do. I always get the mindset that if I’m going to melt the chocolate to make these, I’m going to make sure I have a ton of melted chocolate to get all the crackers covered. Then, I end up with way too much chocolate and end up dipping everything I can find in it. haha! I was proud this year I did a 1/2 the Almond Bark plus 1 square which covered 1 box and 1 sleeve of Ritz crackers. I had just a little bit of chocolate left which I threw some pretzels in.

I will say there is still a good amount of sweets leftover, which I will probably let hang around a little longer. Then, I’m going to have to give them away so they aren’t there to tempt me any longer.

Instead of Drew and Caitlyn coming over to make sausage balls, Rob did that for me. 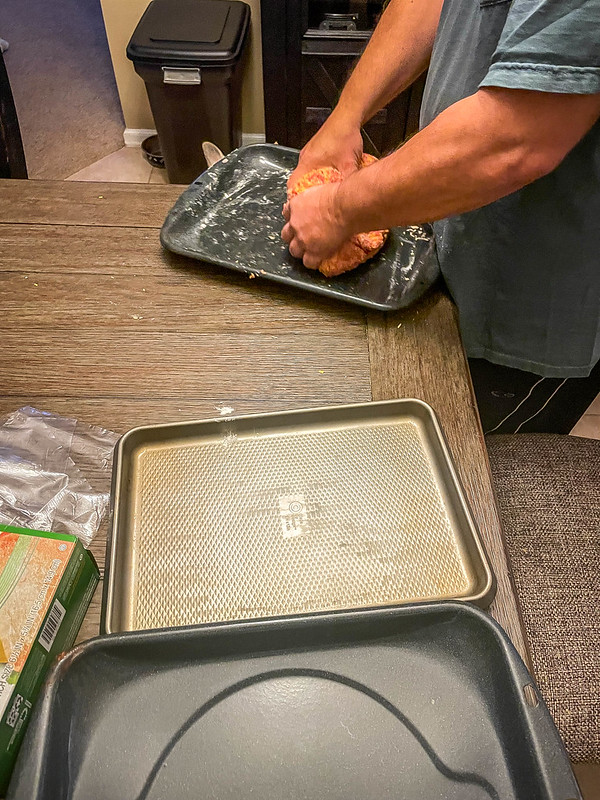 We also had 3 nights in row of social gatherings the week before Christmas (which I didn’t take a single picture of people).

Sunday night was my Empty Nester group. This was the pretty Cranberry drink Amy served. 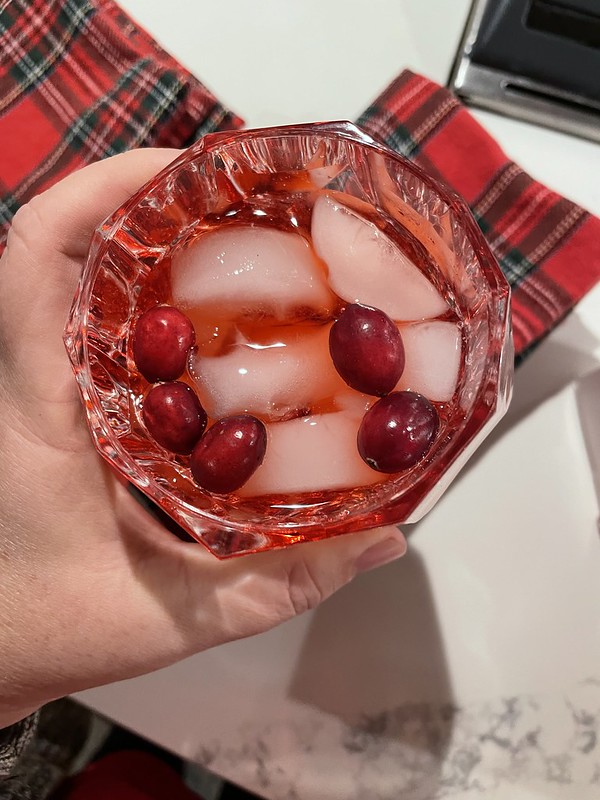 This was what I ended up for Dirty Santa. The gift I brought, which was really pretty wooden tray and glass ornament got stolen the most. 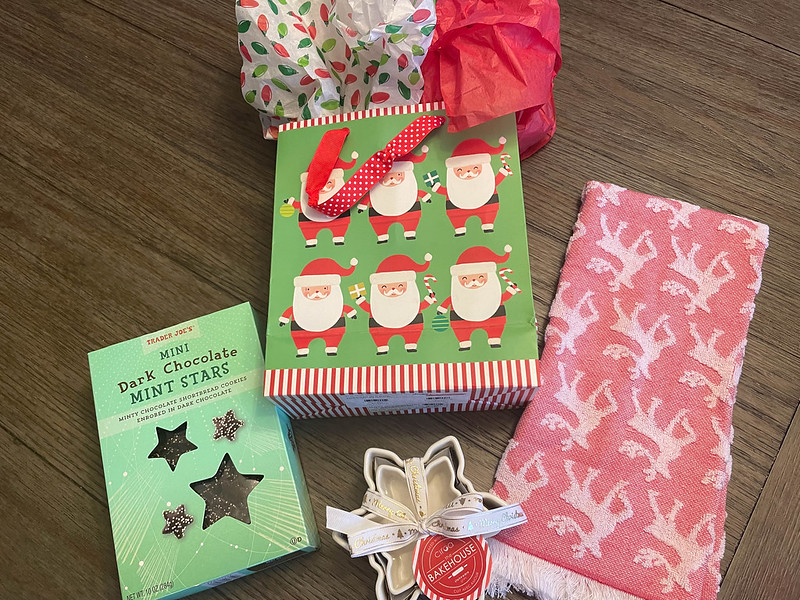 Monday night, we attended a Christmas party with our Sunday School Class. It was a nice gathering at our family dr’s house. We ate and played a game called Punch Bowl.

Tuesday night, we went to ZaZu with Rob’s small group and their wives. I had the Blackened Catch and Rob had the Shrimp and Grits. 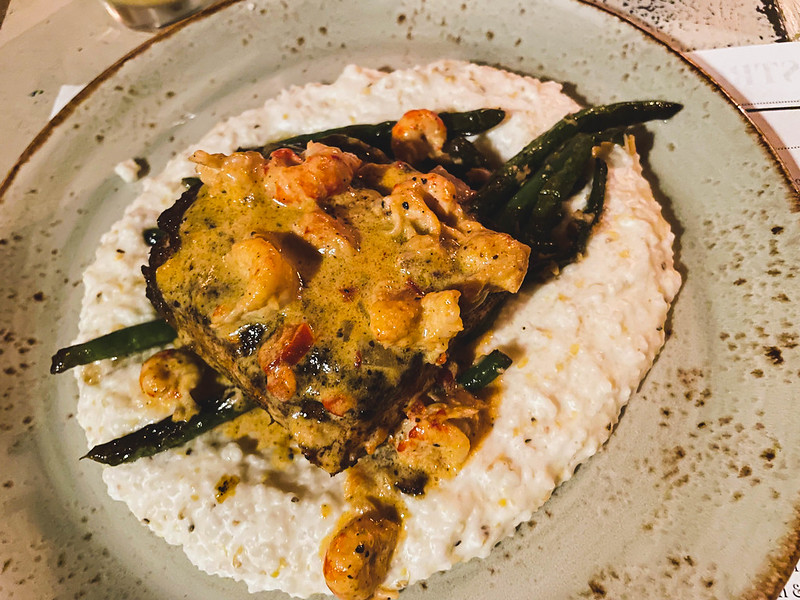 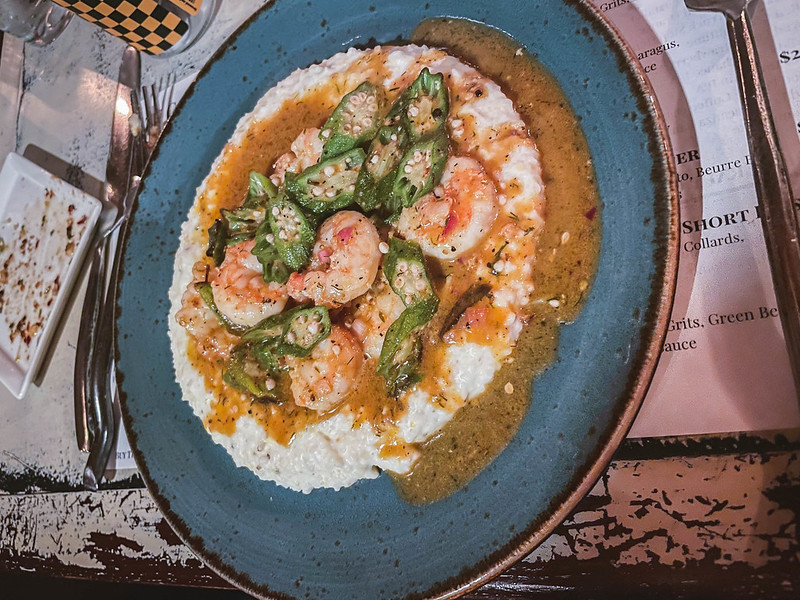 Rob got this beer and I had a sip, and ended up ordering one for myself. 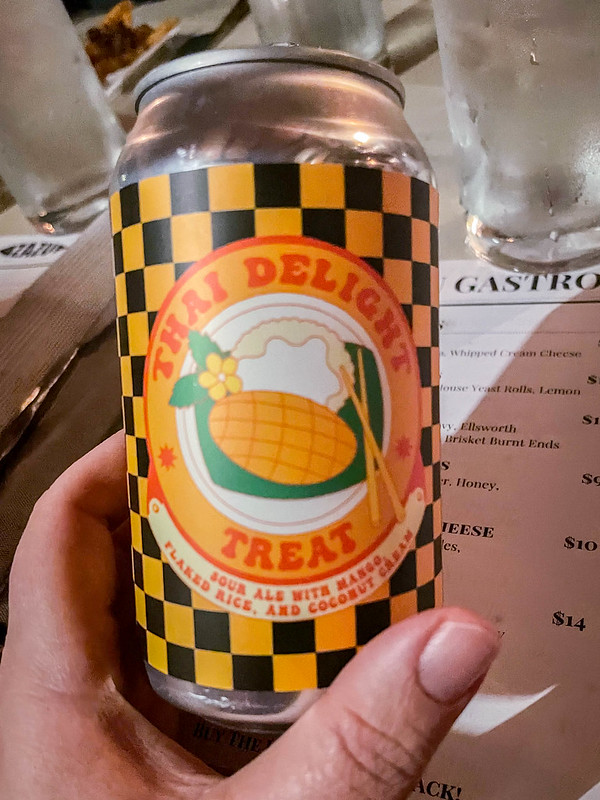 The day before Christmas Eve it got really cold here for us. Like in the low 20’s/high teen’s. It stayed that way through Christmas Day or so. On Christmas Eve, Rob got a nice fire going. 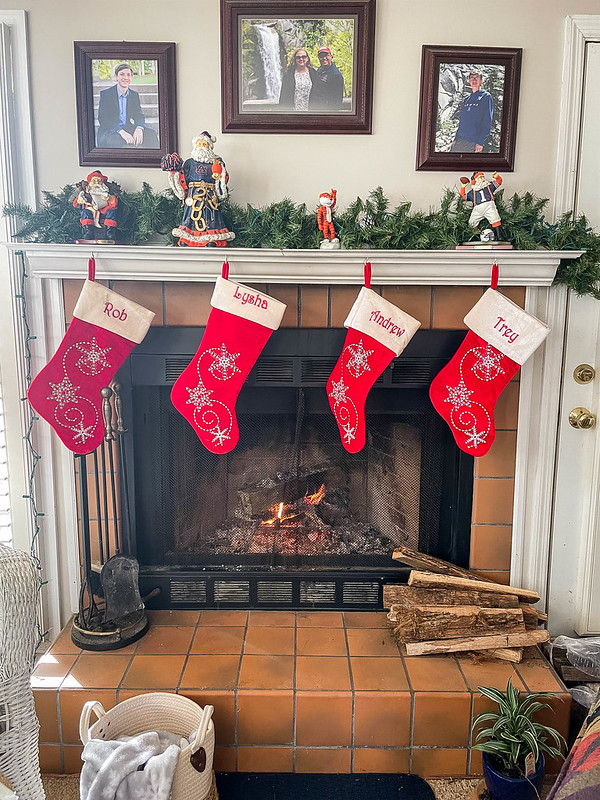 As far as shopping, a lot of that was fast and easy. We waited too long to get some stuff shipped, so we went out into the stores. We got Drew a gas grill and Alex an iPhone 14. We actually let him go to the t-Mobile store the day after Christmas so we could trade in his old phone. He also got to pick out what color and the case. 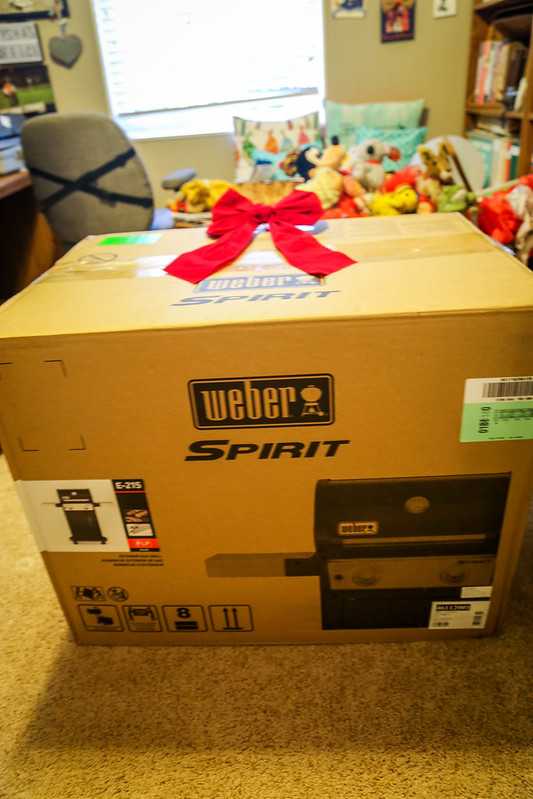 Christmas Eve we had our annual dinner of ham, hashbrown casserole, and green beans. It was me, Rob, Nick, Alice, and David. Alex and Madison didn’t make it. Drew and Caitlyn are never here for that because that’s when her family does Christmas together. 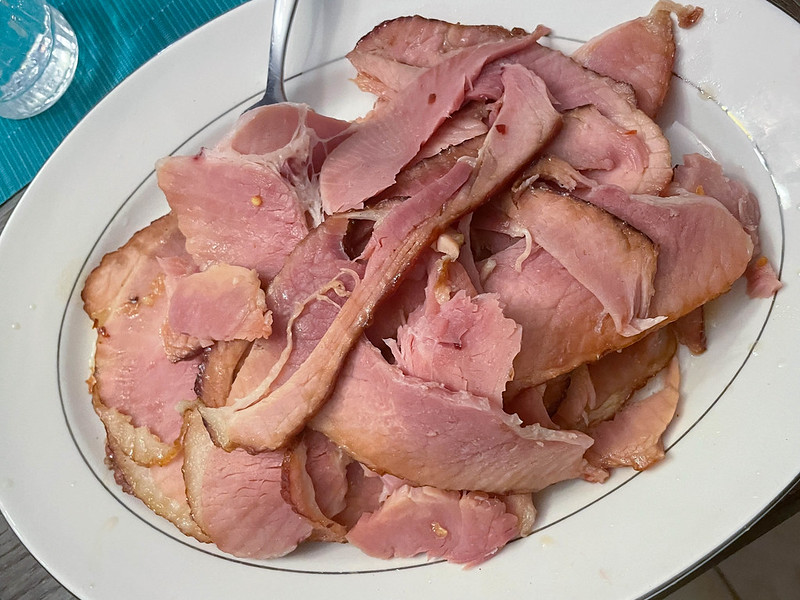 We ate a 5 and then headed up to the church. Rob had worked the 3pm service and our friend, Andrew that works at the church now, had asked anyone to help. Some pipes froze and the basement of the church had flooded. We went right after eating and helped move stuff and mop.

We then attended the 7pm service. We went home and relaxed before heading back up to the church for the 11pm service where we were lit the advent wreath. It was quite enjoyable. Loved having my boys and Caitlyn there for that. 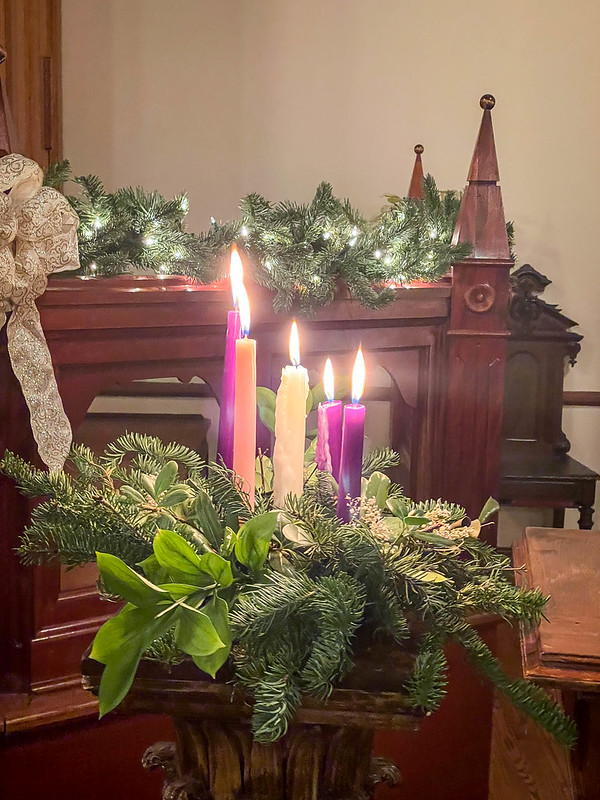 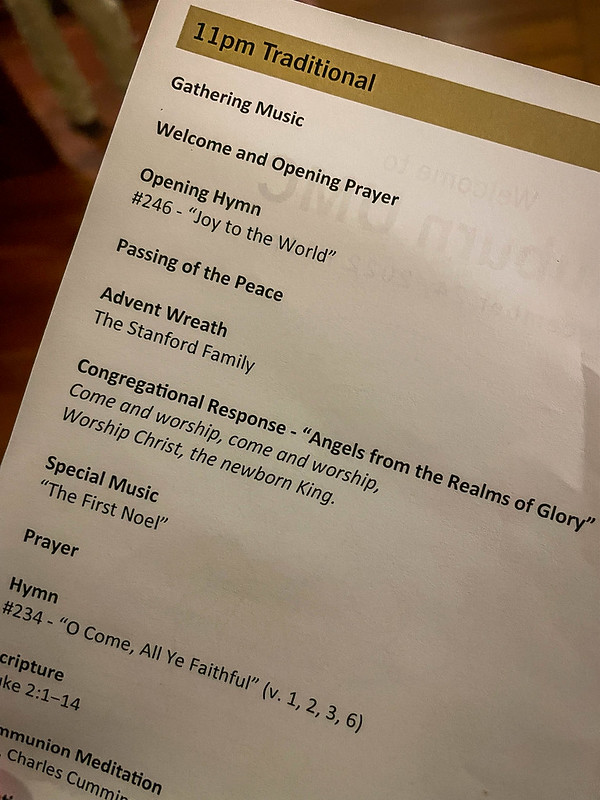 It was cold that night, so it was nice to get back to our cozy home. Rob and I filled up the stockings. I snapped a few pics of the tree and went to bed. 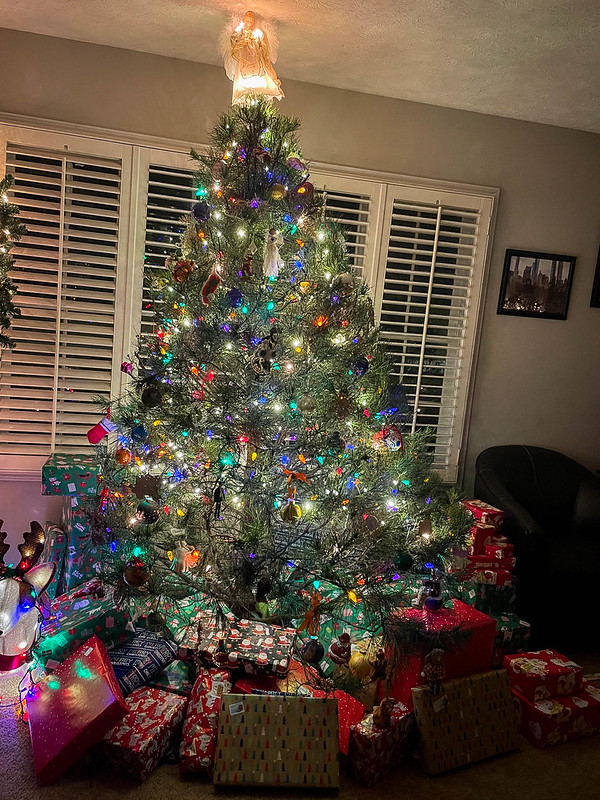