While writing the FAQ page, I realized that before I started cruising a lot of the cruise lingo were words I didn’t know. You may find this helpful when reading my entries about cruising. 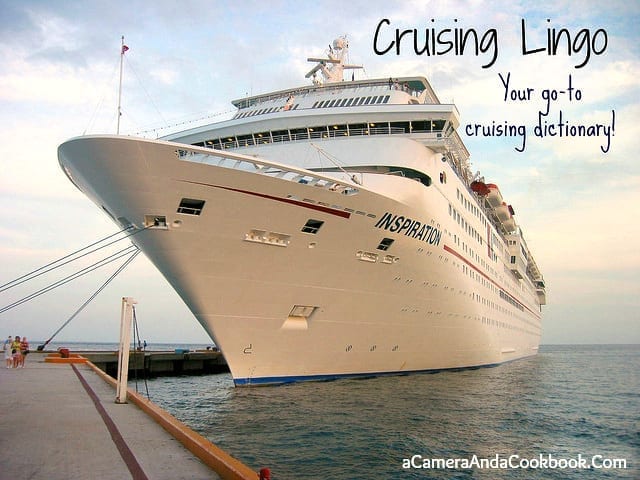 bow: front section of the ship
bridge: section of the ship where the captain & crew navigate and steer the ship
cabin: passenger room onboard the ship: also called a stateroom
cabin steward: person who cleans the cabin
cruise director: head of the ship’s entertainment staff
debark: to leave the ship and go ashore
deck: each level (floor) of the ship
embark: to go on the ship
forward: the area toward the bow of the ship
Freestyle Cruising: Norwegian Cruise Line’s style of cruising, featuring casual dress and no set dinner times
galley: ship’s kitchen
gangway: ramp or stairway between the ship and the shore while the ship is docked
guarantee: a cruise reservation in which one pays for a certain category cabin, but is not given a cabin number. Passengers sometimes take a reservation like this hoping to getting upgraded to a higher category
inside cabin: stateroom that does not have a porthole, window, or balcony
Maitre d’: over sees the dining room operations. supervises all the dining room wait staff
maiden voyage: first voyage of a new ship
muster station: meeting place onboard the ship that usually refers to the area where one would go to get into the lifeboats in case of an emergency
nautical mile: unit of measurement equal to one-sixtieth of a degree of the earth’s circumference; it’s measured in the U.S. as 6,080.2 feet or internationally as 6,076.1 feet
oceanview cabin: outside cabin with a large porthole window or a verandah
onboard: located on the ship; carried or used on the vessel
open seating: dinner seating in which tables are not assigned
outside cabin: stateroom with a porthole, window, or balcony that overlooks the ocean-also referred to as an oceanview cabin
port: left side of the ship when facing forward; also the harbor where a ship docks
porthole: round window on a ship
port-of-call: port at which the ship anchors or moors, and the passengers are allowed to disembark
promenade: open deck that encircles a ship, often used for walking or jogging
pullman: bed that folds into the wall
purser: person onboard who serves as a financial or administrative manager for guest services
roll: side-to-side movement of the ship
shore excursion: tour or guided activity in which guests participate while ashore
stabilizer: retractable arm located below the waterline mid-ship, which can be extended to help reduce the ship’s roll in rougher sea conditions
starboard: right side of the ship when facing forward
stateroom: cabin
stern: back end of the ship
suite: largest class of stateroom; features separate living and sleeping areas
tender: small boat used to transport passengers from the ship to the shore. Tenders are used when the harbor is not deep enough for the ship to dock.
upgrade: change in cabin assignment to a better category
wake: path left in the water at the stern created by a moving ship
windward: side of the ship against where the wind is blowing