Here’s a quick run down of what we did in December.

December started off with getting a Christmas tree the first weekend of the month. 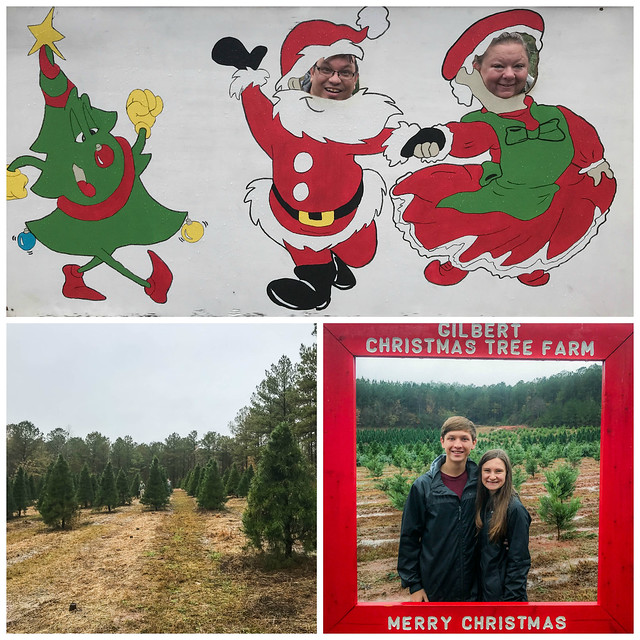 Drew performed his last concert with AU Cappella as the president. 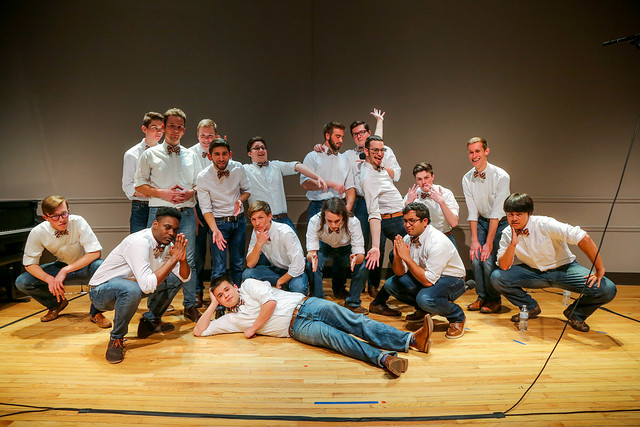 Drew and Rob flew to Baltimore, did some site-seeing, then went to pick up his friend, Joseph, from the Naval Academy. From there they drove to Philly for the Army-Navy Game the next day. Although it was quite cold they had a good time. 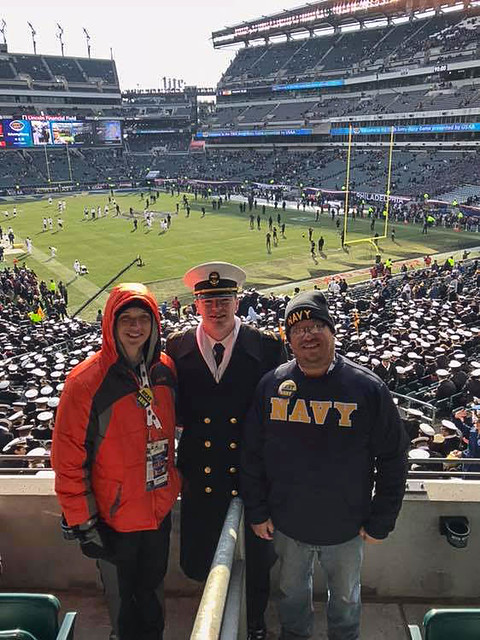 While they were away, I took Alex to the Auburn Christmas Parade, where he got to march in a parade for the first time. 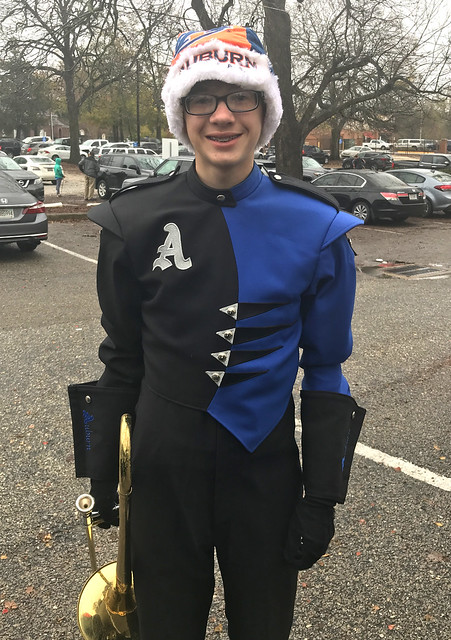 Here’s Drew at one of his basketball games with the pep band. (He’s the fifth one on the first row.) 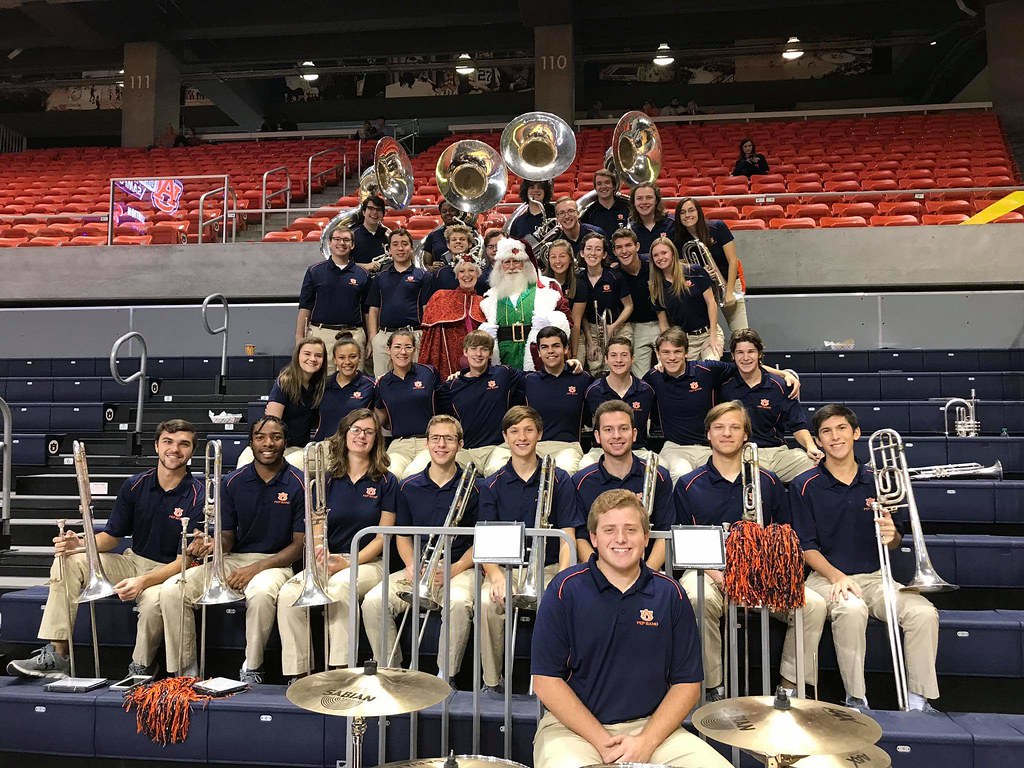 My work does a Christmas lunch every year. I loved this year’s surprise. Aubie is so much fun and totally made my day. Here he is opening a gift the library gave him. 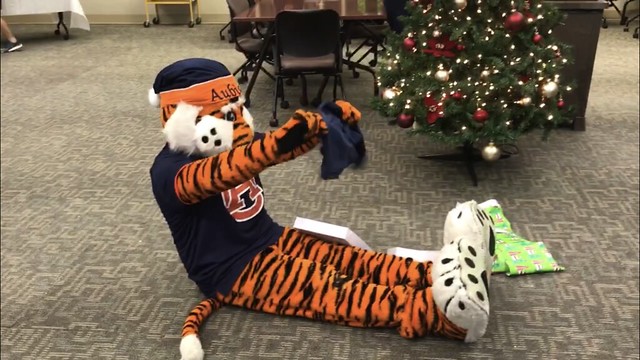 Our church always does a marvelous job in December of having a great entertainment. This is a picture of Voctave, who is an a cappella group that we really enjoyed. 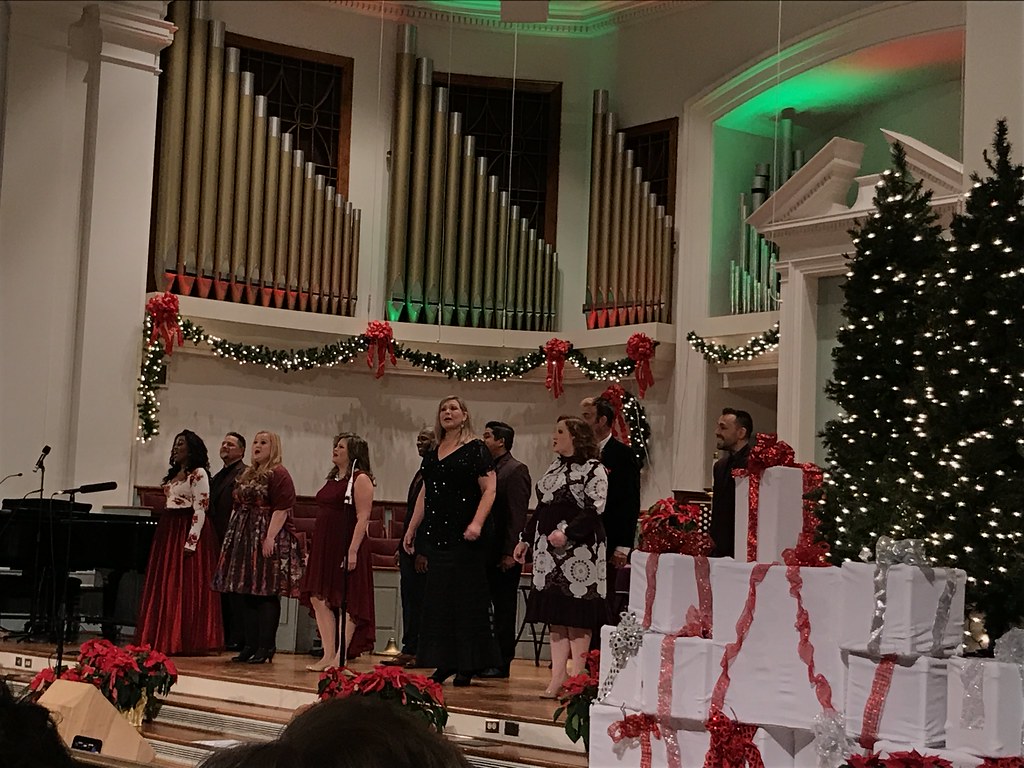 That same day Alex, Rob, and I attended part of the Boy Scout Christmas Court of Honor. We do a toy drive, pictured below. 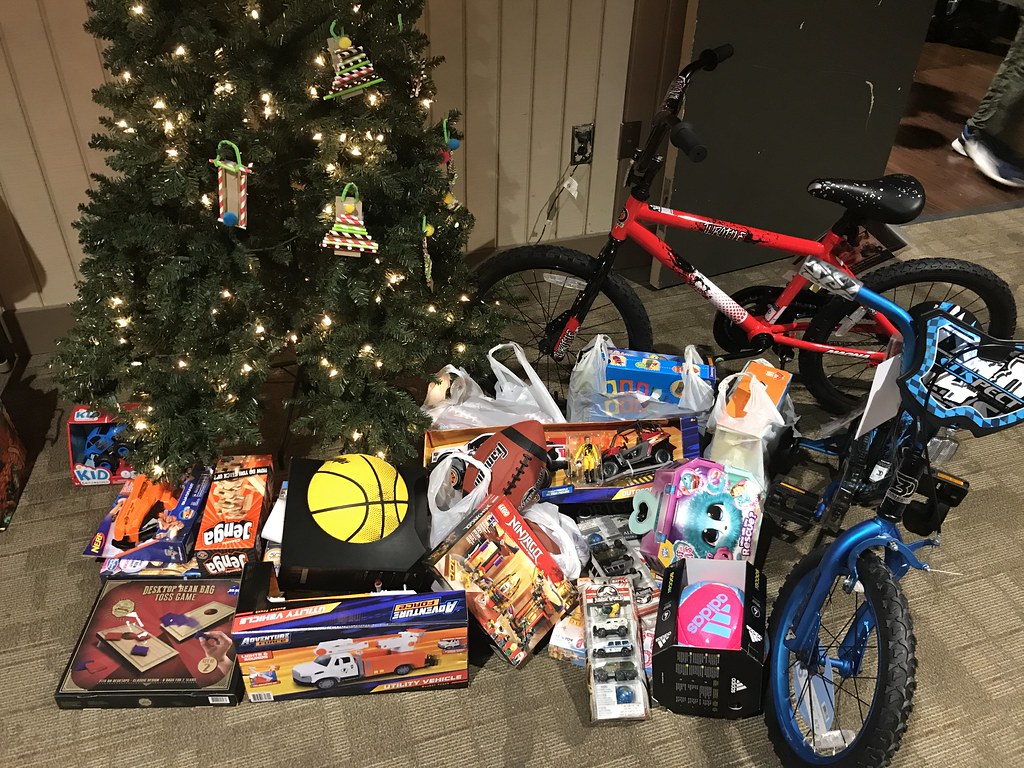 There was some yummy food too! 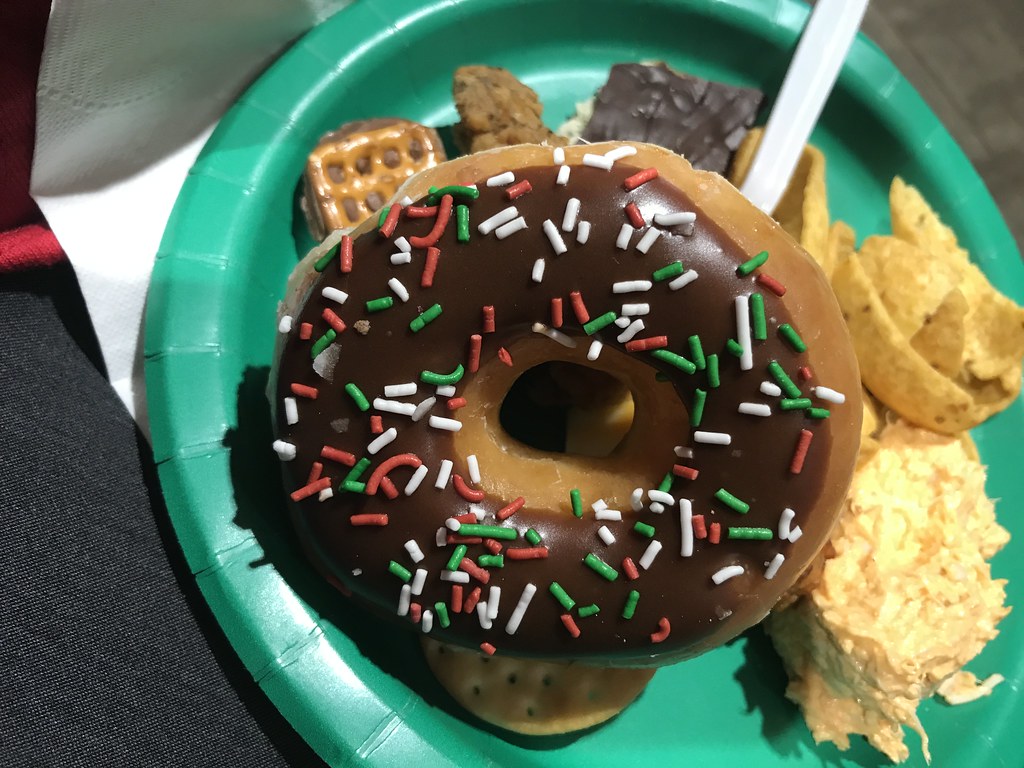 On December 23 after Alex’s last final we loaded up the car and raced up to the airport to fly to New York City for a few days. I’ll write more about this soon. 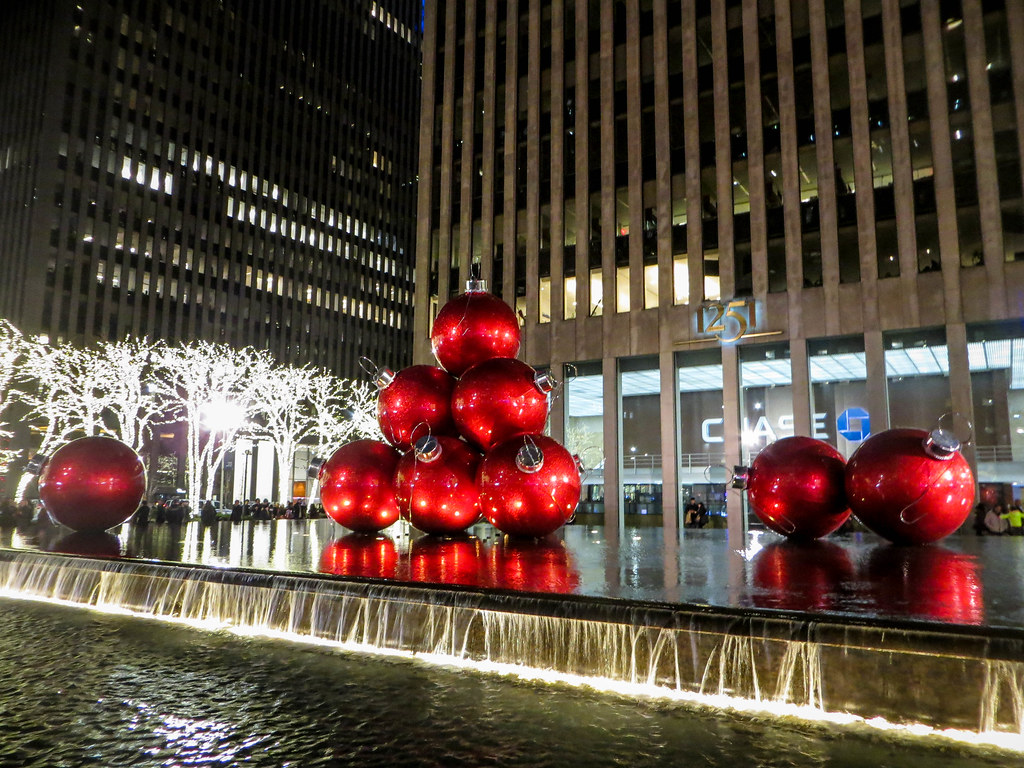 When we got back from NYC, it was time to buckle down and finish up everything that didn’t get done before we left. So we had Christmas Eve Day to do all that!

Alex decided to take nap in the pine straw after he and Drew raked the front yard. 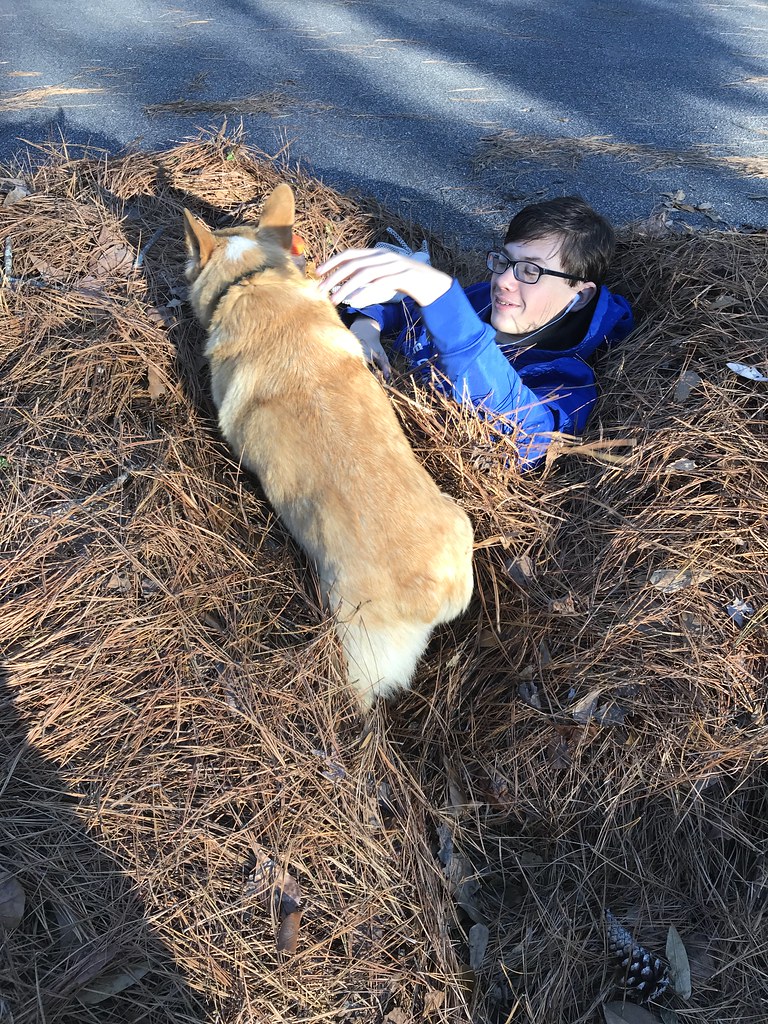 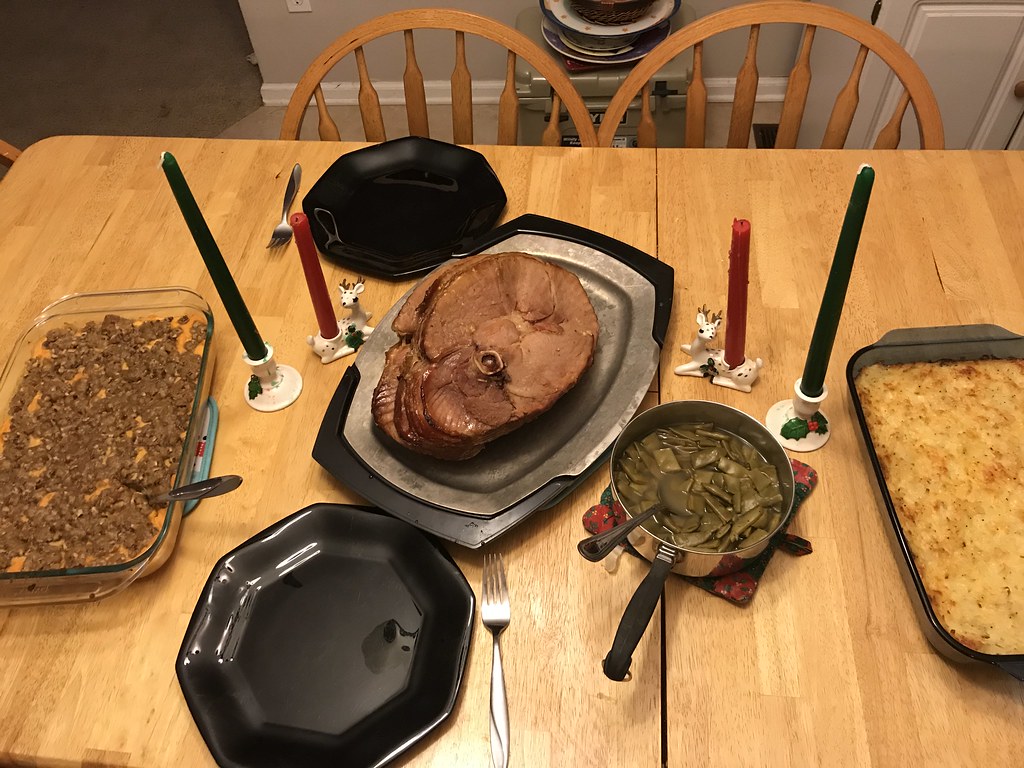 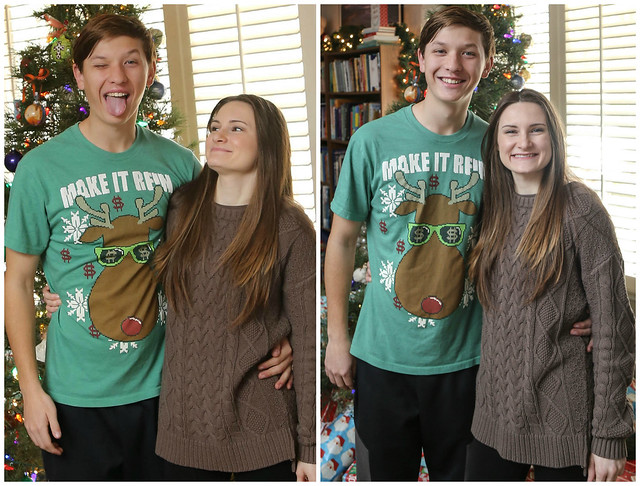 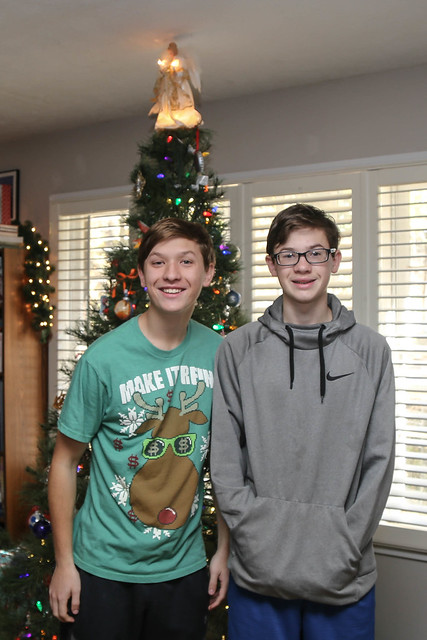 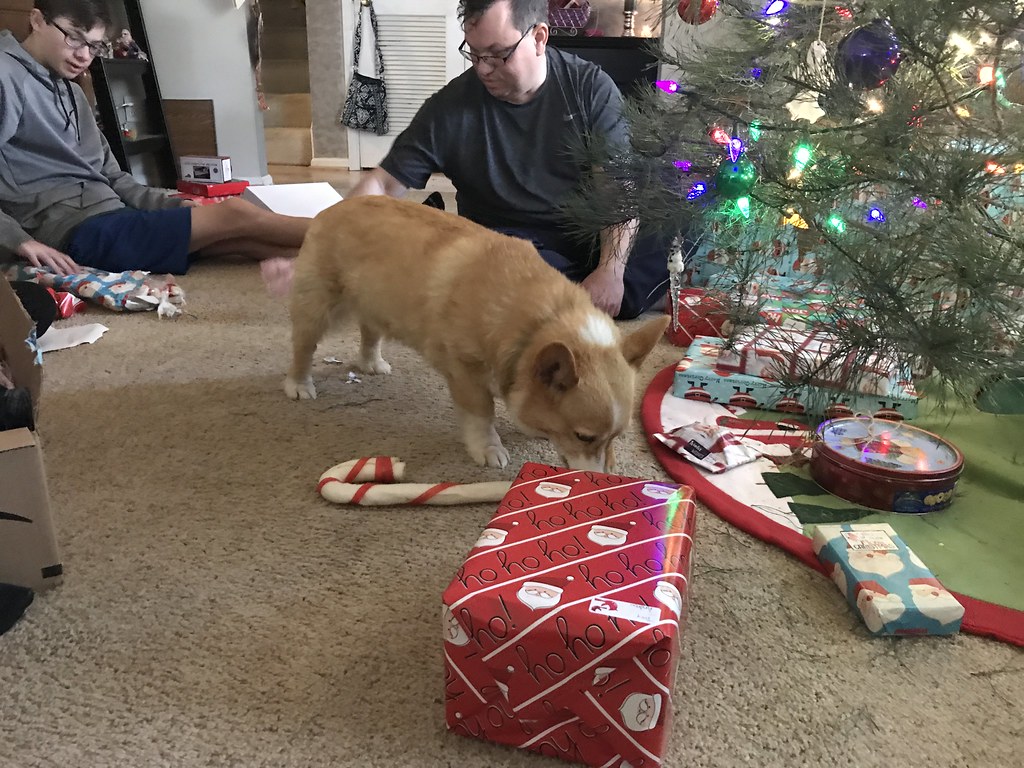 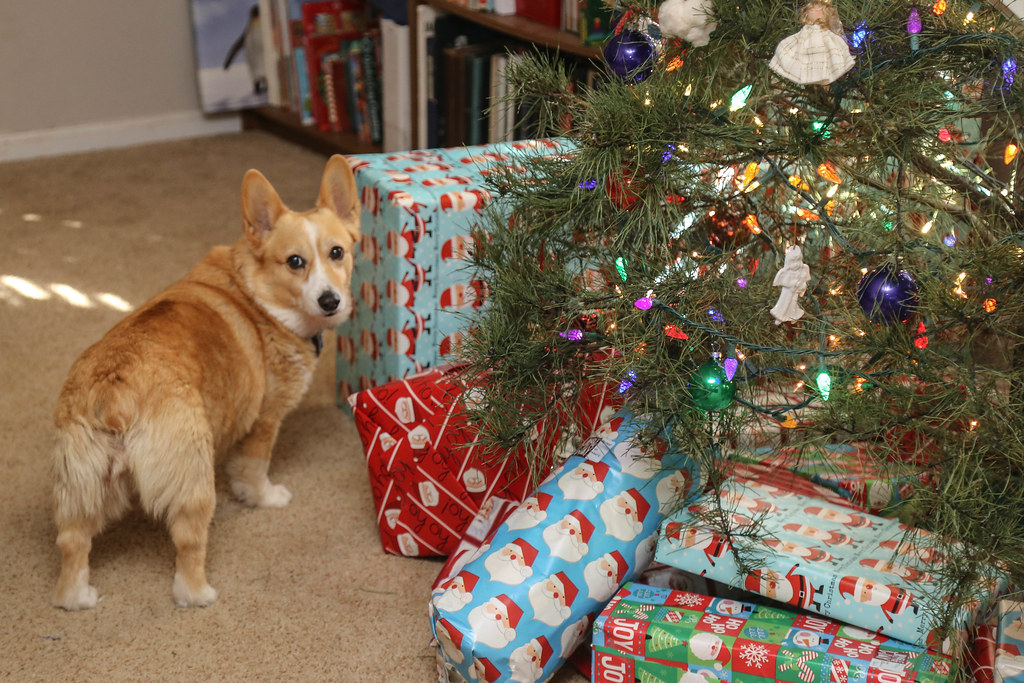 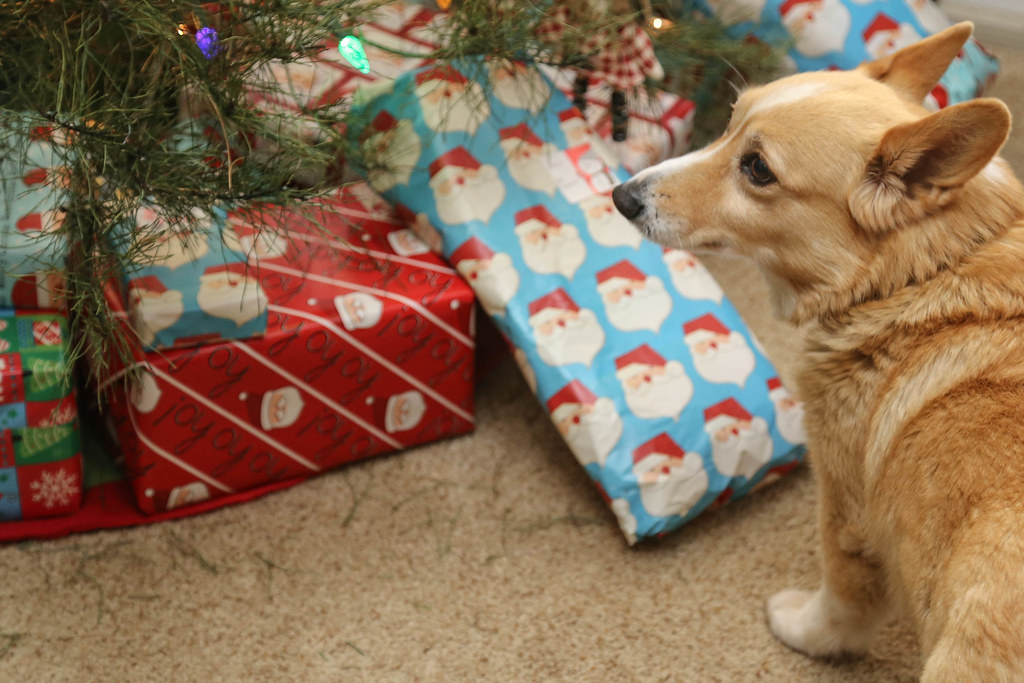 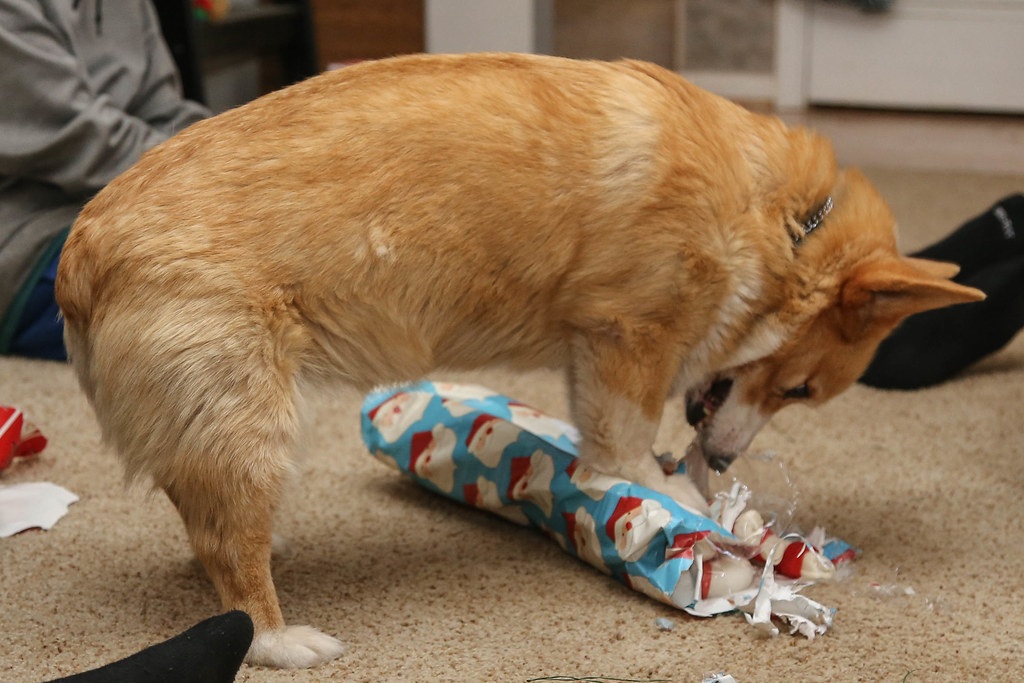 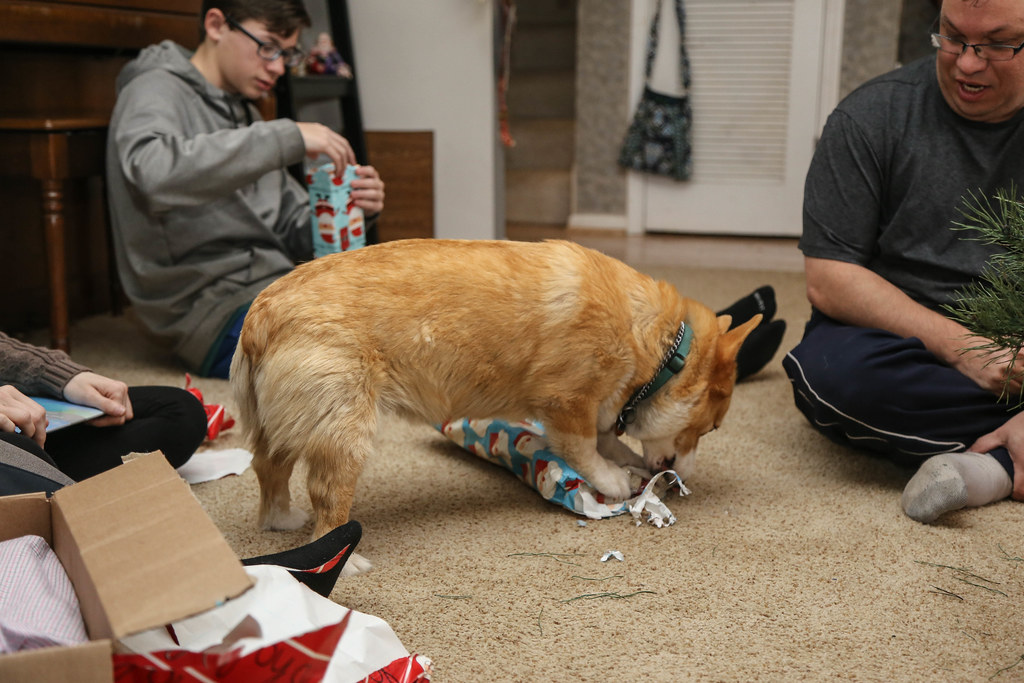 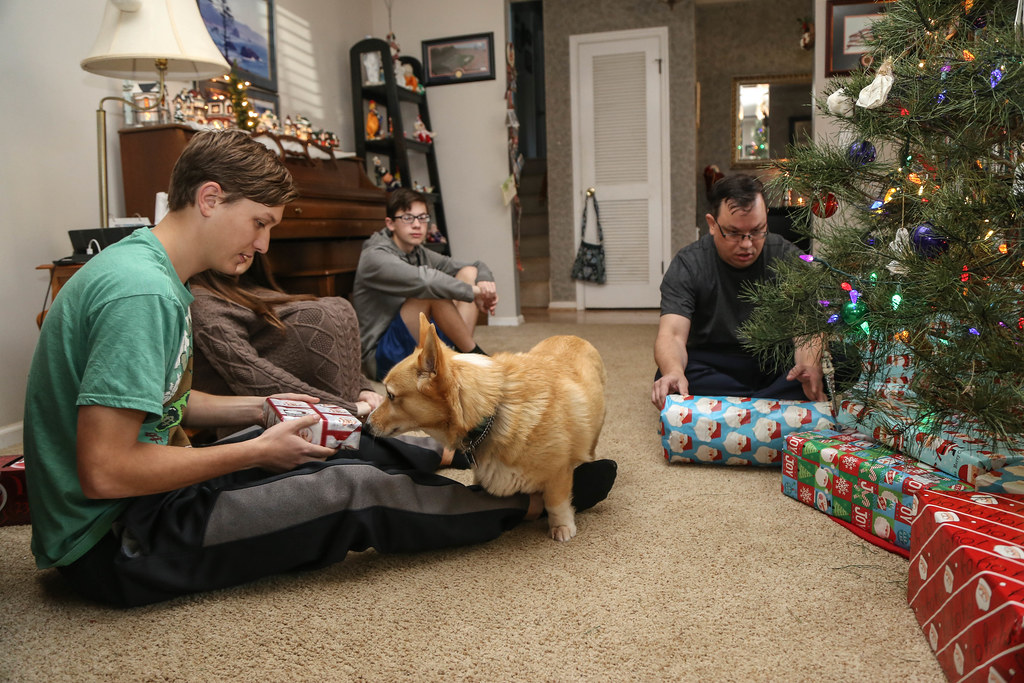 The boys were excited to get this keyboard from their grandparents in Texas. 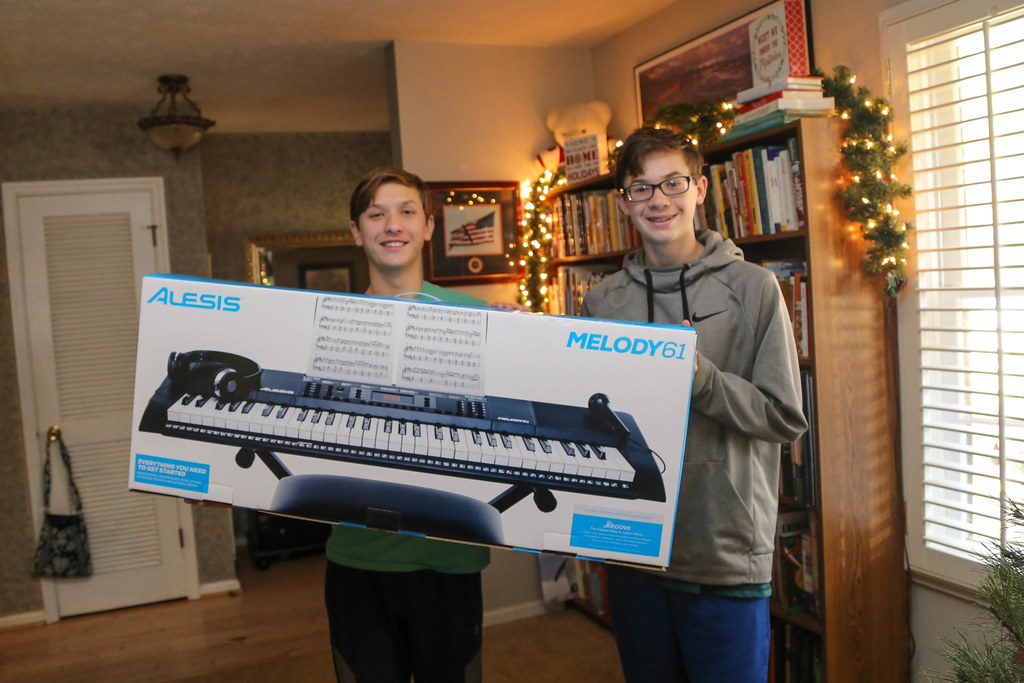 Daisy was in heaven surrounded by all her new bones. 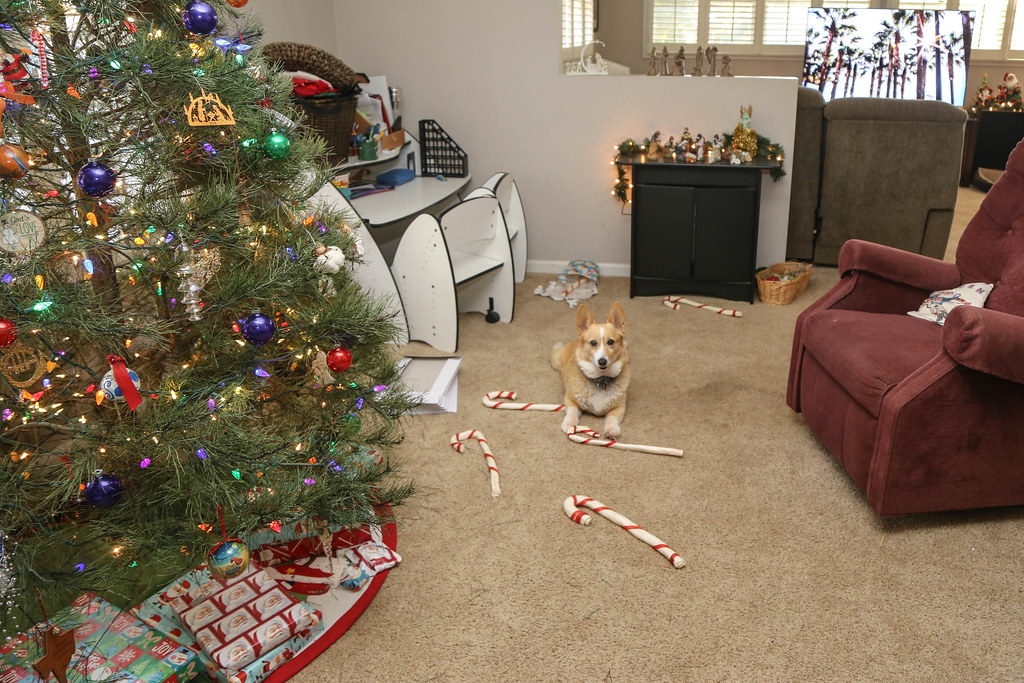 After we opened presents other family started trickling in. Rob got the homemade meatballs and sauce going, while the boys set up some of their new “toys,” while others of us, just chilled out. 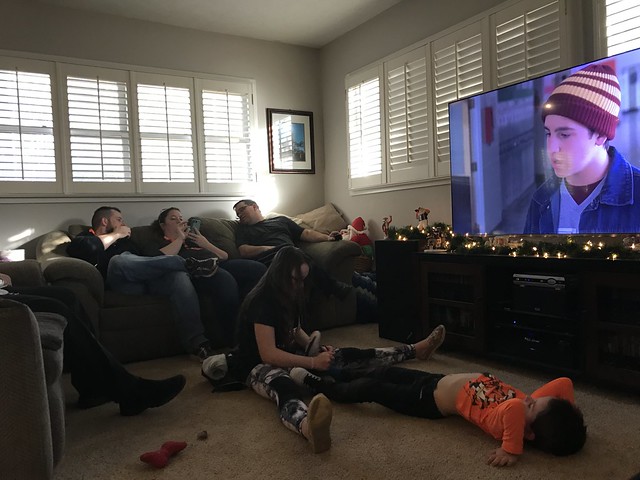 Typically each year we do a gift swap between our family members that includes Rob’s Mom and Step Dad and Rob’s sibling’s families. This year we decided to give back to our community instead so we went to a local community event were 100’s of locals came to stuff stockings and then deliver them to first responders as well as anyone who has to work on Christmas. It was truly amazing and will probably become a tradition. 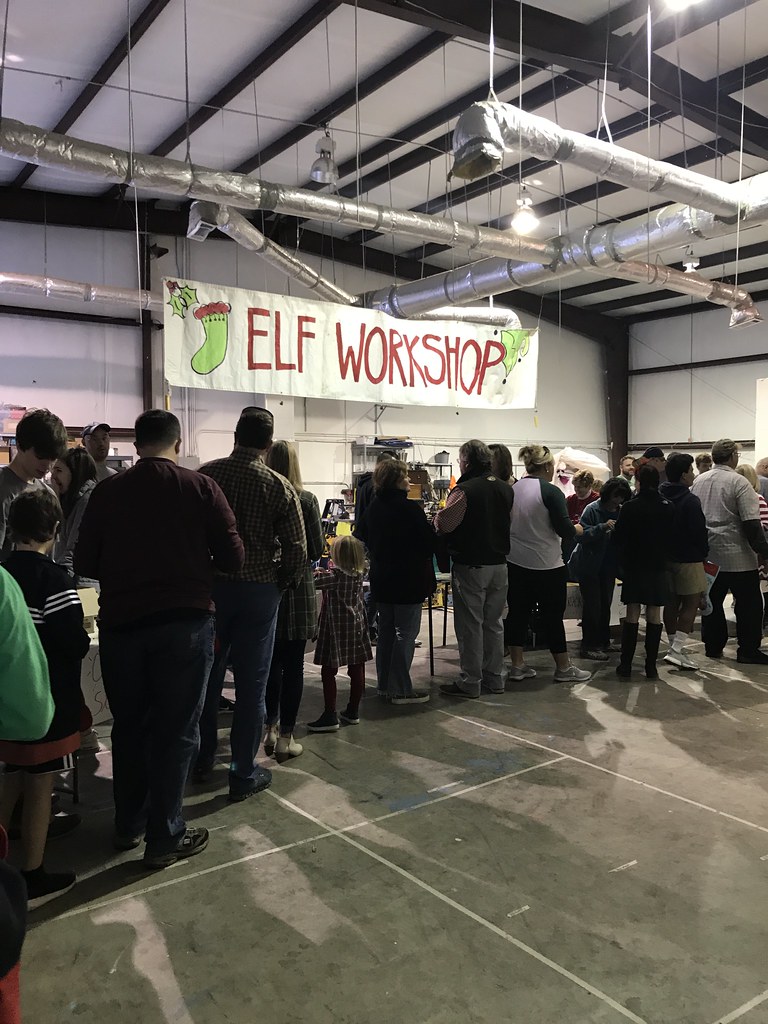 Here’s the kids with the Opelika Fire Department #4. They were so excited and nice. They let any of who wanted to sit in the fire trucks. We were so hungry, because we hadn’t eaten yet, so we were anxious to get back and make the homemade pasta and chow down! 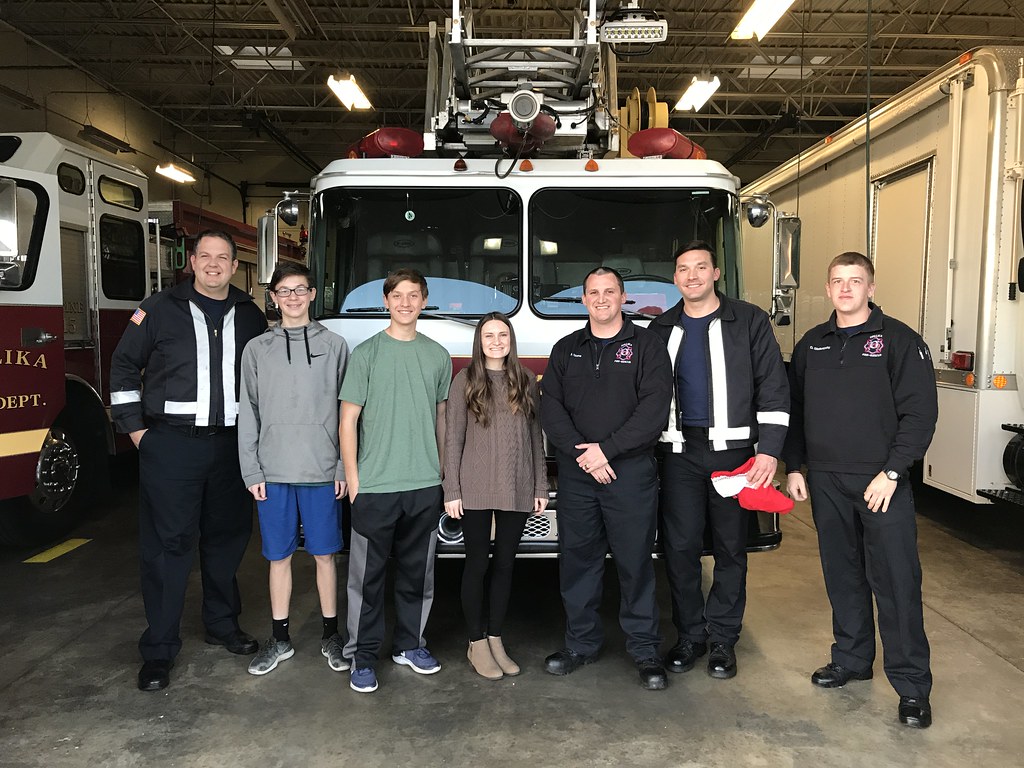 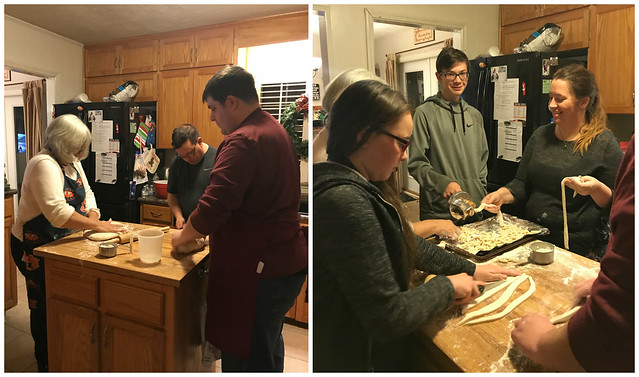 Rob and our preacher and his wife had a discussion at on the high school football games recently about our love for Conecuh sausage. She was telling Rob about the Christmas sausage that is very hard to get because it only sells around Christmas and they don’t make a lot of it. They were so nice to think of us and bought us some. We enjoyed it a couple days after Christmas in some Jambalaya. 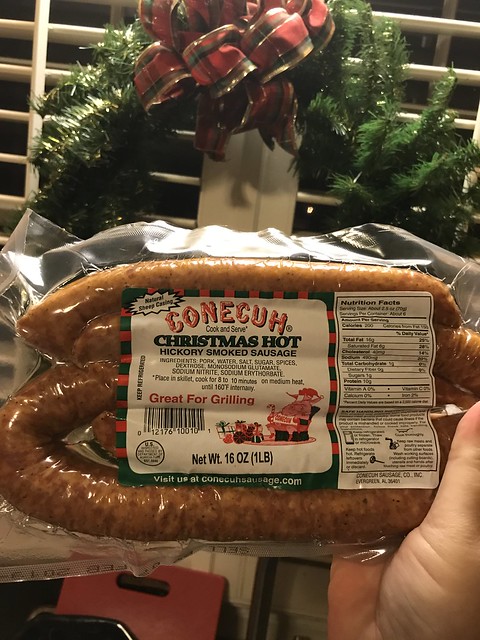 Drew left early the day after Christmas to meet up with Auburn University Marching Band to load the buses and head to Nashville for the Music City Bowl. The weather was a rainy and yucky, but luckily Vanderbilt University allowed them to use their indoor facility to practice in.Photos courtesy of Keith Stephenson 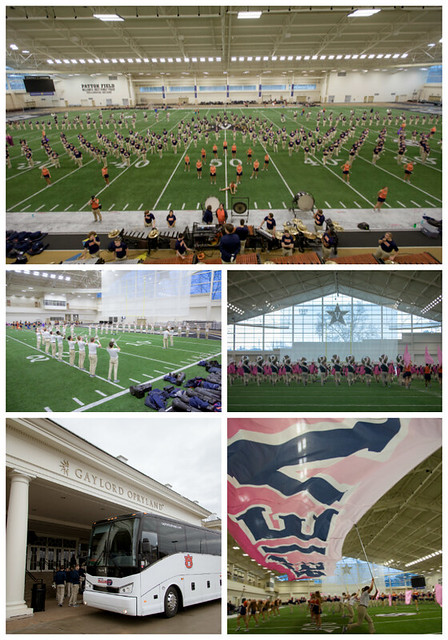 Here’s some pictures from the game. Photos courtesy of Keith Stephenson 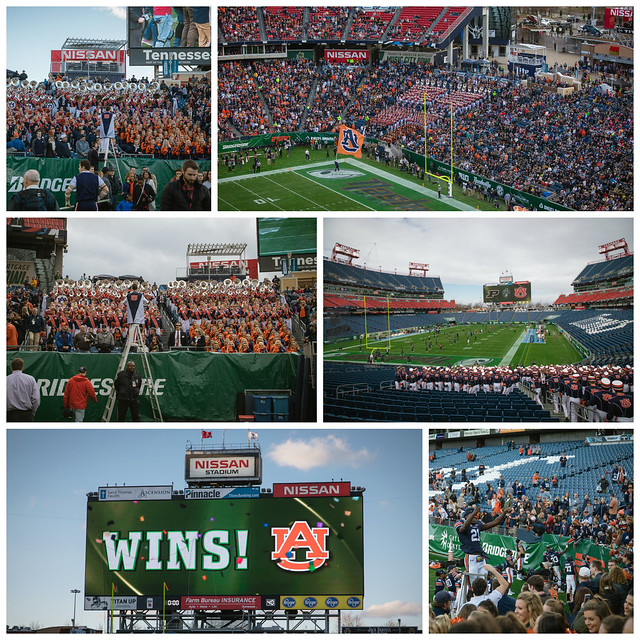 We didn’t go to the bowl game, but we of course we watched it on tv. 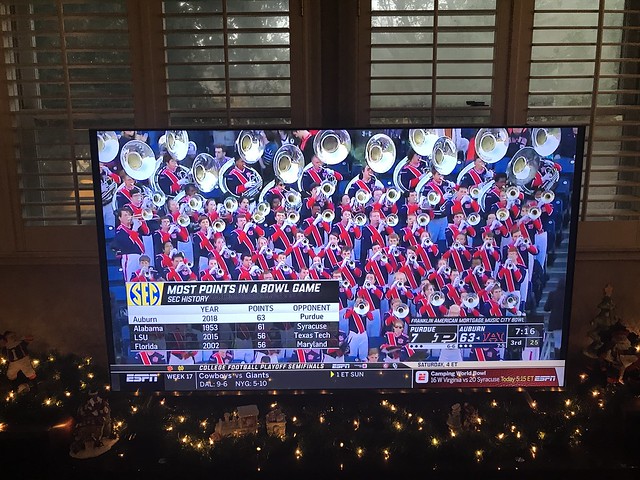 We ended the month and the year with friends at a Sunday School Party, which I didn’t really take any pics of if you can believe that!