Sometimes it takes something bad happening for us to learn a lesson. Back in February, Drew tested our parenting words. We told him his brand new iPod that he received for Christmas was “as good as stolen if you take it to school!” I’m not sure what about that didn’t sink in with him. The third or forth time he took it to school, during his weight-training class, he left it and his cellphone in a “hidden” pocket in his book bag. He came back to a bag that had all the zippers left gaped open and a “hidden” pocket that was empty! No iPod, no cellphone, no mechanical pencils that accompanied the electronic devices. I’m sure he had that shriek of anger and sadness bolt through him like lightening when he realized that his very expensive iPod had been taken, just like we had warned him of, many times before.

That night when I finally realized why he was acting so strangely, I started calling Pawn Shops to see if someone had tried to sell it already. I figured that would be a hasty action, but I thought it was worth a shot. The 3rd shop I called asked if I had filed a police report and informed me that they have to run anything brought in through a list that is provided by AUPD. “Well, duh!” With all the thefts that occur at my workplace, the university library, I should have thought of that. I informed Drew that we needed to call the police to file a report so it would be on record, he cringed with anxiety of this whole situation and it’s ramifications.

Two police men later showed up at the front door with crisply ironed slacks and shiny patent leather shoes, pen and notepad in hand. I had Drew do most of the talking, as I felt he needed to get the full effect and understand what was taking place. They told him many of the same things that Rob and I had already tried to drill into this thick skull, but maybe hearing it from a uniformed officer it would actually sink in.

After they left, Drew said “Wow! This has been an unforgettable situation, Mom. Having those cops out makes me see what a huge mistake I made.”

The response in my head was, “WOW! Maybe he really has learned his lesson!”

Only to have him ask me when I was buying him another iPod!

“What? Are you kidding? Son, you’re not getting another iPod until you have a job and can plunk down $400 of your own!”

Astonished and upset, he walked up to his room with his tail between his legs.

I won’t even describe the scene that occurred when Rob got home! It was ugly, I’ll just say that.

But the good news I have is last Thursday, I get a call that went like this…
“Mrs. S, this is Officer G with the Auburn PD, we took a police report for you son back in February.”
“Yes, sir.”
“Well, I’m happy to report that your son’s iPod has been recovered.”
“Really? WOW! That is great news!”
“You may come get it this afternoon. Just give the people at the desk this case number”…

After getting the case number, I hung up the phone and raced over to the police department. I picked it up, and later that day showed Rob, who was over the moon ecstatic! I handed over to him, so that he could give it back to Drew that evening, since I would be at work when he got home. 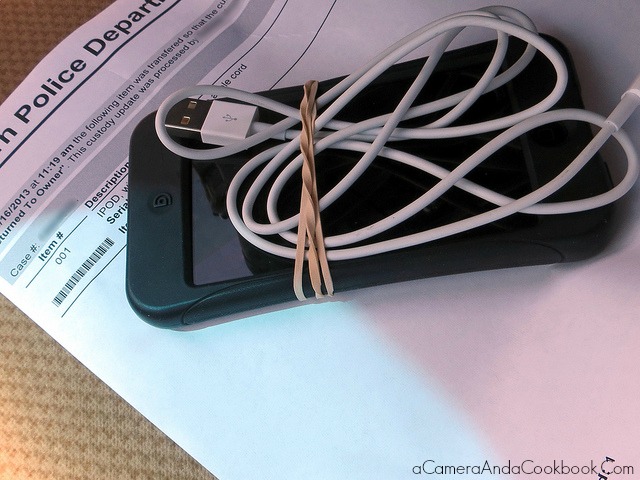 Talking to parents about the situation over the weekend, and hearing about situations that took place in the last couple of weeks, we think it may have been a janitor at Drew’s school. How wrong is that!?! Still elated that this very expensive device has been put back in the hands of my son and that this Christmas present wasn’t a total waste after all.

One thought on “A lesson learned?”