Today I’m talking about Week 31 and boy what a week it was! August 2nd-8th, 2021. Still can’t believe its August already! This week most of what I’m sharing is about Drew’s girlfriend, Caitlyn.

Tuesday – August 3rd
Tuesday morning, I got up and met Caitlyn so we could take her grad pics. We got out there I pulled out my big camera and started to take a shot. “no SD card” popped up on the screen! AHGHGH! I hardly ever take my SD card out, but I did recently help Rob figure something out with another SD card and never put my SD card back in.

So needless to say I ended up doing the session on my phone, which I just hated to do. Luckily I have an iPhone 12 pro, which takes pretty remarkable photos for a phone! Here’s a couple of my favs. 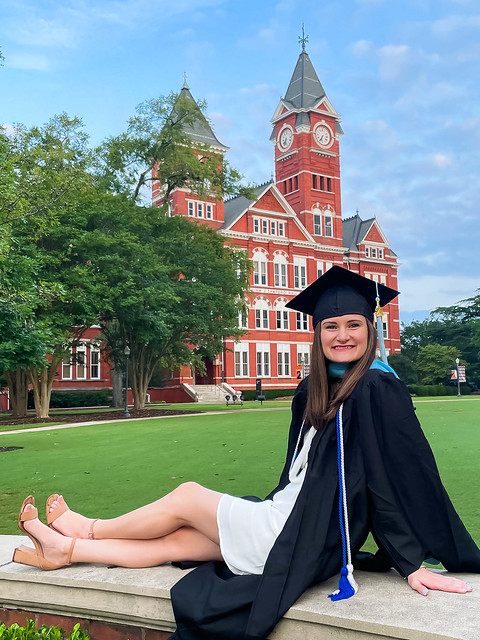 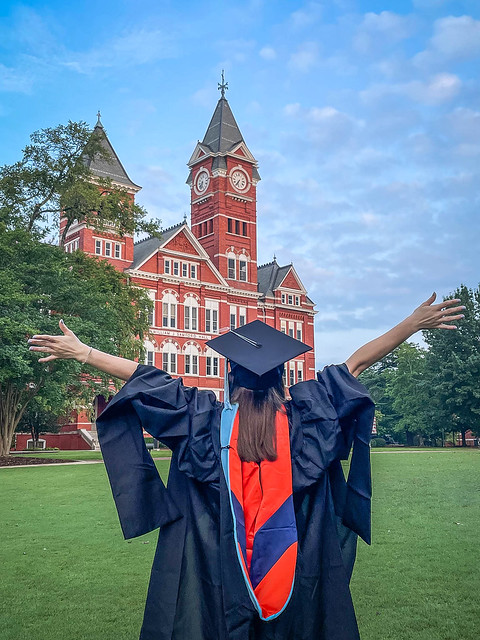 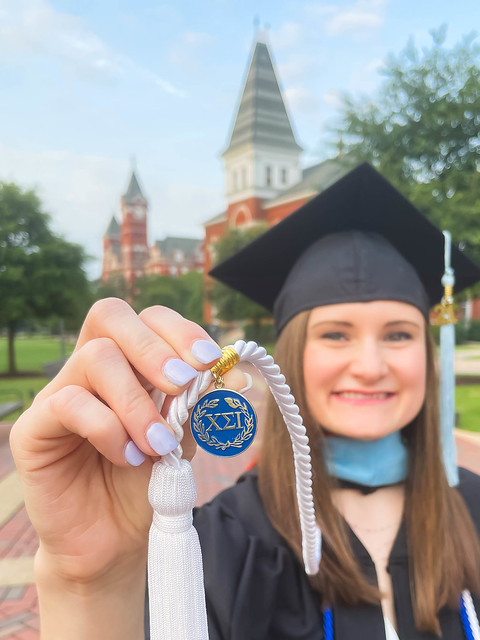 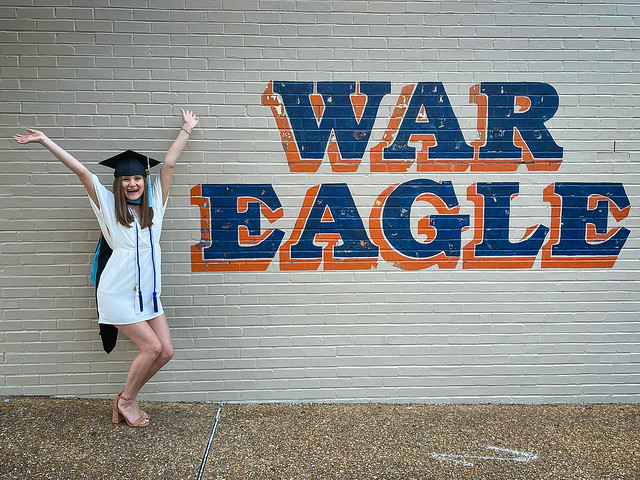 Wednesday – August 4th
As if this week wasn’t busy enough! Drew and Caitlyn moved into their new apartment. So excited for them being able to stay in Auburn and doubling the size of their place with lots of great amenities that they are excited about. 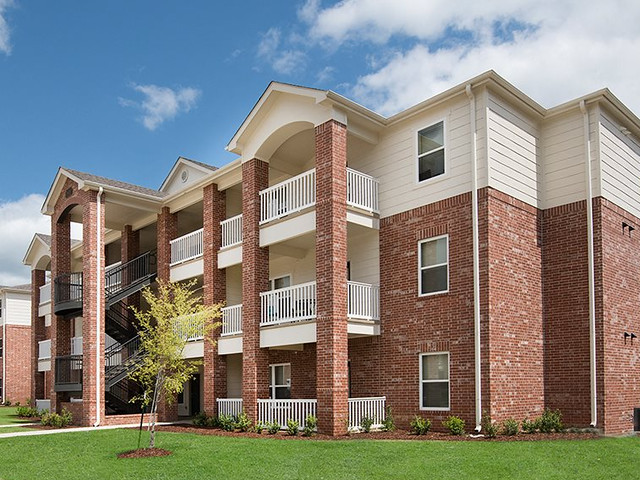 Friday – August 6th
I took the day off to help Drew prepare food for the Caitlyn’s party the next day. We went to the store and got everything we needed. Here’s Drew driving Mamere’s new Lexus wearing Papere’s sunglasses. 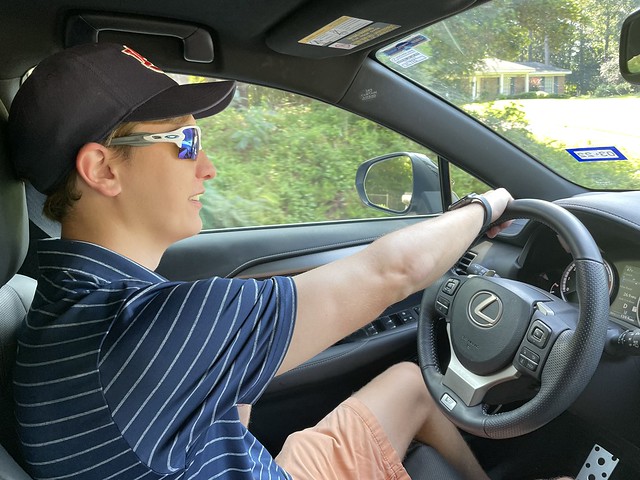 We spent 2+ hours just cutting up fruit. We had a watermelon nightmare! The 1st watermelon we got, most of the ‘meat’ was not ripe so we threw that out and just used half of it for the watermelon bowl (see pic further down in post).

Drew went to Publix to get another watermelon. We cut into that one and it tasted good. Then Drew took another bite a little later and spit it out. It was rancid! He took that back and since we were so tired of cutting fruit, I told him to buy some pre-cut watermelon and that’s what we ended up using.

We also made Buffalo Chicken Dip and Apple Dumplins. We pulled out the sausage balls from the freezer that Drew and Caitlyn had come over to make a couple weeks before. We also went over to Party City to get some decorations. Rob’s Dad and Step Mom hung out with us that day too.

After a busy day of party preparations, we stopped so we could get ready to go to the Commencement Ceremony. Here she is! 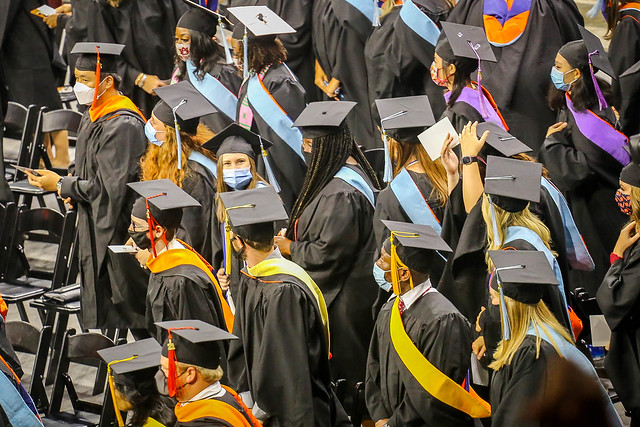 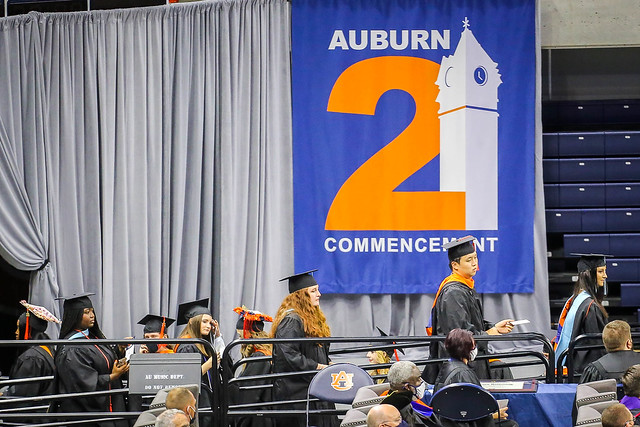 Pretty happy to have her Masters in Mental Health Counseling! 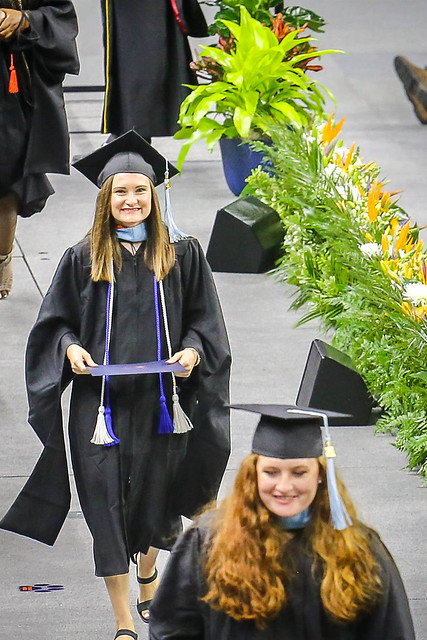 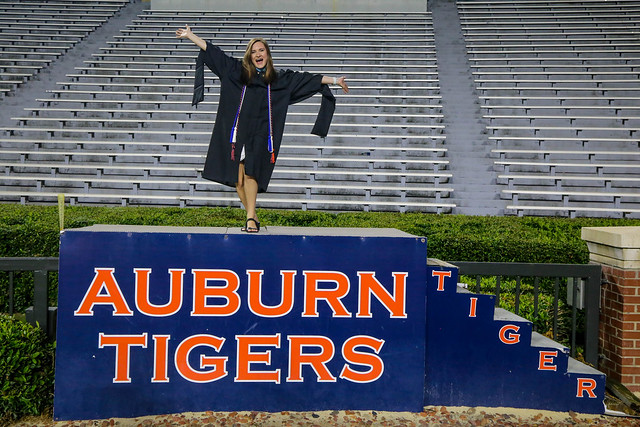 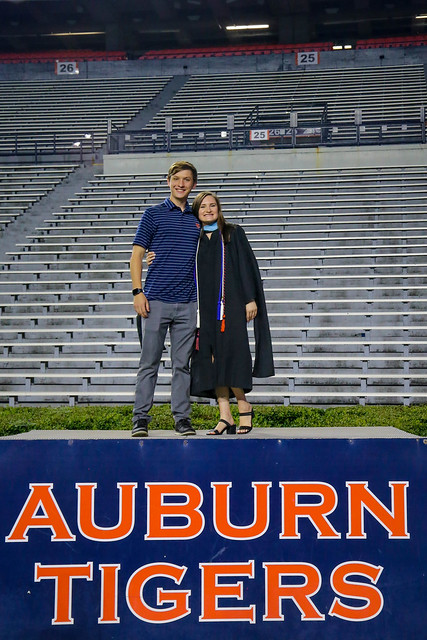 Saturday – August 7th
Saturday I had Emmaus Retreat training in Dadeville, but I left early to get back for Caitlyn’s party. Here she is with some friends that came. 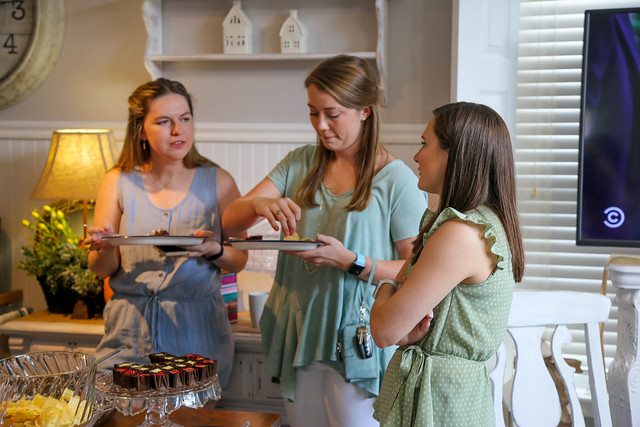 Drew threw this party for Caitlyn. The party was at Caitlyn’s grandparent’s house. Drew decided on the menu and decorations. He was in charge of keeping the table stocked that day. I was very proud of him. 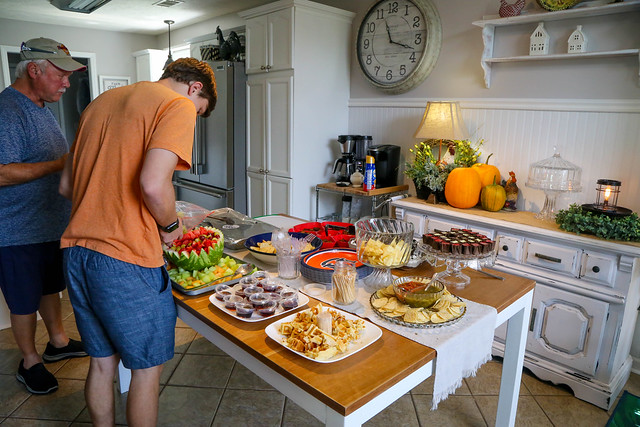 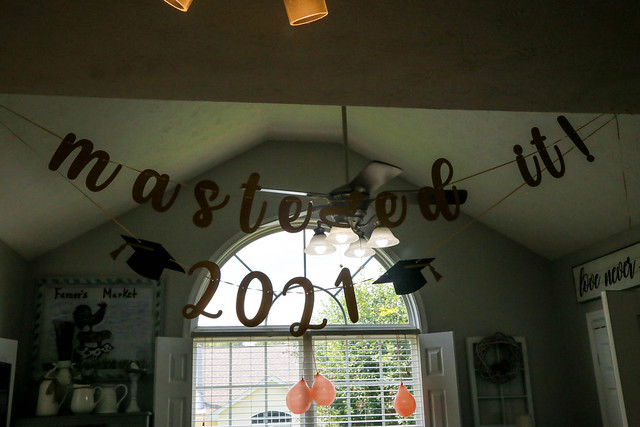 Here is the spread before the Apple Dumplins and the Foosackley chicken fingers were added. 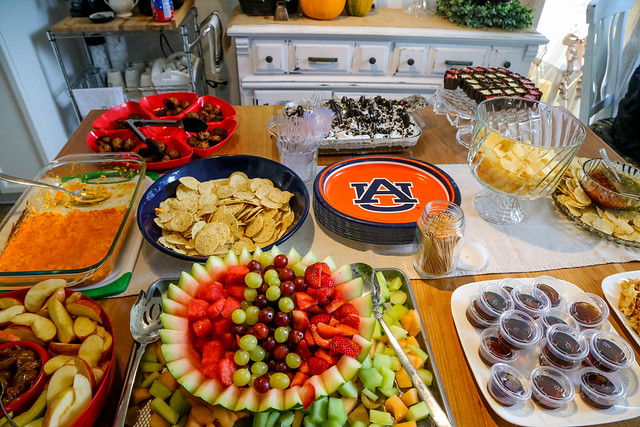 Sunday – August 8th
After church, we went out to the Hound to celebrate some more. I tried Mimosas for the first time and shared them with Drew and Caitlyn. 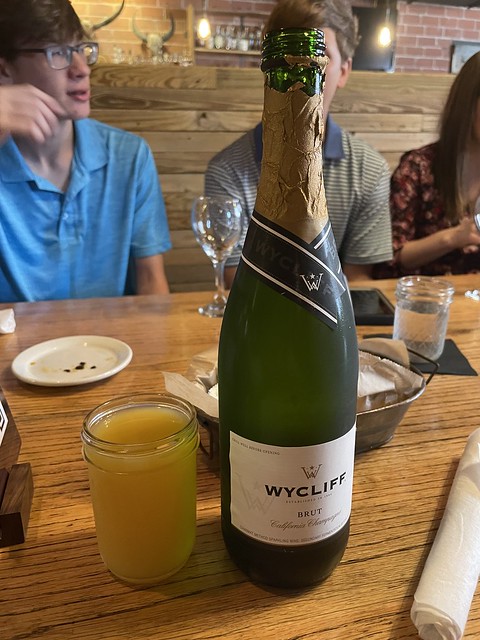 We also had their pepper jelly. So good! 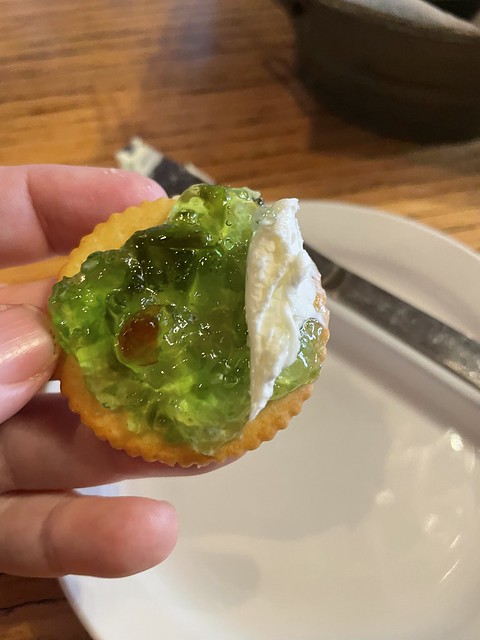 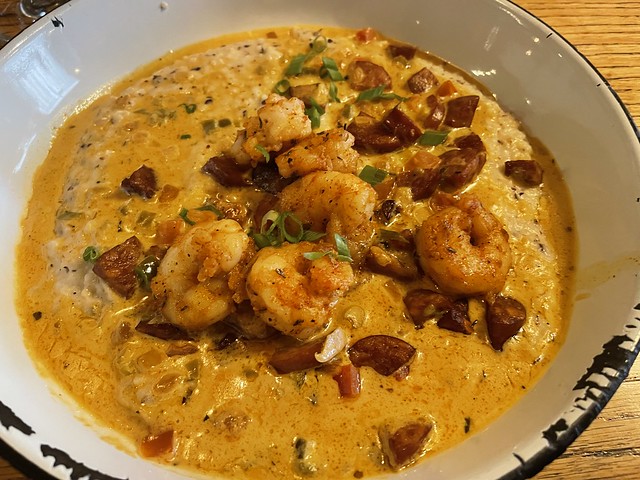 The Hound had a Congratulations card on the table for Cailtyn. so sweet! 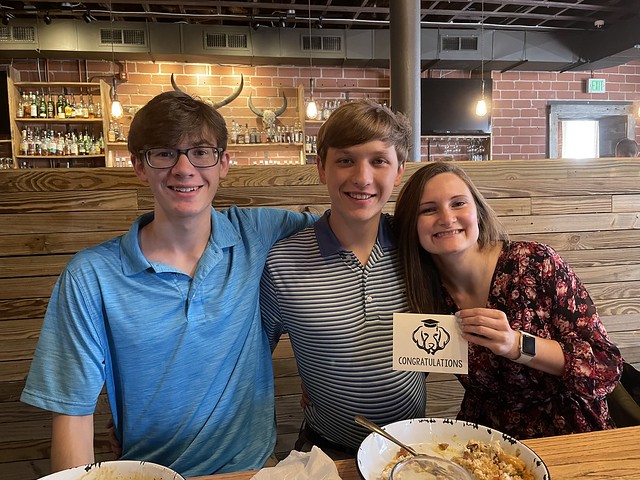 That afternoon we went back over to Caitlyn and Drew’s to visit and we went out to the golf course that they has access to and hit some balls. 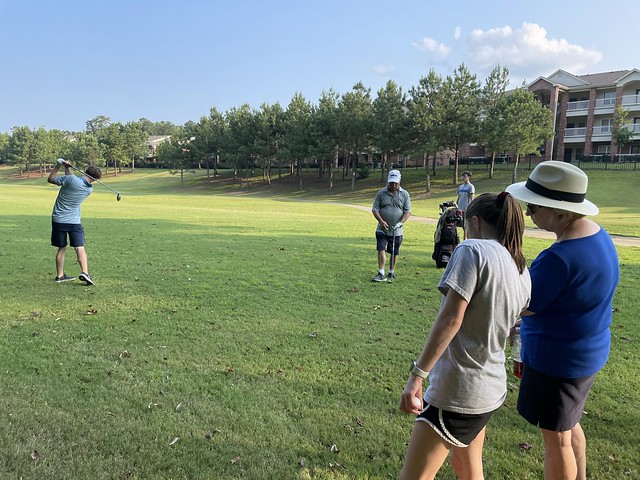 It was really busy and exciting week.