I don’t write a ton of personal stuff on here anymore, but I’d like to. Often I have all these thoughts and just can’t get them into coherent sentences. 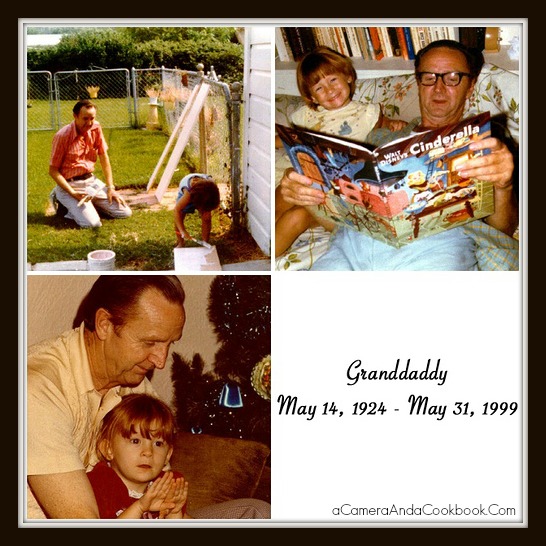 I’ve been feeling nostalgic lately. Today is always a day I really reminisce, because today is my Granddad’s birthday. He lost his battle with congestive heart failure in May 1999, so May is really a time he’s on my mind a lot. I’ll never forget the dreaded 2 a.m. phone call from my uncle. I listened to the answering machine just praying it was a wrong number only to hear my Uncle Mike say I needed to call him back immediately. Then, I knew. Granddad had been in the hospital for months. He’d been on a respirator up until about a week before that day. The good thing was the Wednesday before he passed away he had called me and I talked to him for a short time. He told me how he was about to start physical therapy, so that he could go home in a few weeks. I’ll just never forget at the end of our conversation, he started to tell me something and then said, “Oh, I’ll just tell you later…” Just that short amount of talking wore him out, so I can see why he thought he’d just tell me later. Of course, curiosity drives me crazy to know what he was thinking.

Granddaddy was my Dad’s dad, who raised me since I was 3 when my parents divorced. My Grandmother and him raised me well, I do believe. My Granddad and I were so close. I’ll always remember sitting on their bed eating a snack and watching TV or playing a game. We played Candyland, Checkers, tons others, but our favorite was Upwords. My Grandmother and I didn’t have that kind of relationship. Granddad was such a generous person. He was always thinking of others. I can’t even begin to say what he used to do for others. He did so much for my Grandmother. He was the one who cooked, cleaned, worked. He seemed to be quite the romantic. He would make breakfast for her and serve to her in bed. He loved to shop for her. Every holiday he would give her something and a sweet card would accompany it. Not many men I know enjoy shopping for woman’s clothes, but he did. In fact, he was the one who took me school clothes shopping every year.

Besides his generous heart, he had high expectations for me. He expected me to always do my best and he knew when I didn’t. It was a big enough punishment for me just to have tell him and Grandmother that I had made a bad grade or not done something I should have. They had me trained. Most of the time they knew they didn’t have to say anything at all, because I punished myself. I always had that lingering thought in my head, “What will my Grandparents say?” before, during, or after I did something whether it was going to a party they didn’t know about in high school or painting the dresser with nail polish at the age of 4. In fact the dresser painting incident was the only time I was spanked!

Education was a priority in our household. After Granddad passed away all my school loans were paid off thanks to him. In fact, when Grandmother and Granddad got custody of me, they said their first goal was to live to see me graduate from high school. Well, they did that! He was so proud and then I remember him saying that his goal was to see me graduate from college. He was just a couple of months from that. He passed away May 31st and I graduated on August 30th.

I had so many special memories of wonderful times with him. Although, he could never take the place of my Dad, he was so much of a father figure in my life. I learned so much from him. That takes me back to all the nights of going over every single math problem, each and every night. He was a stickler when it came to math. That’s another story for another day.