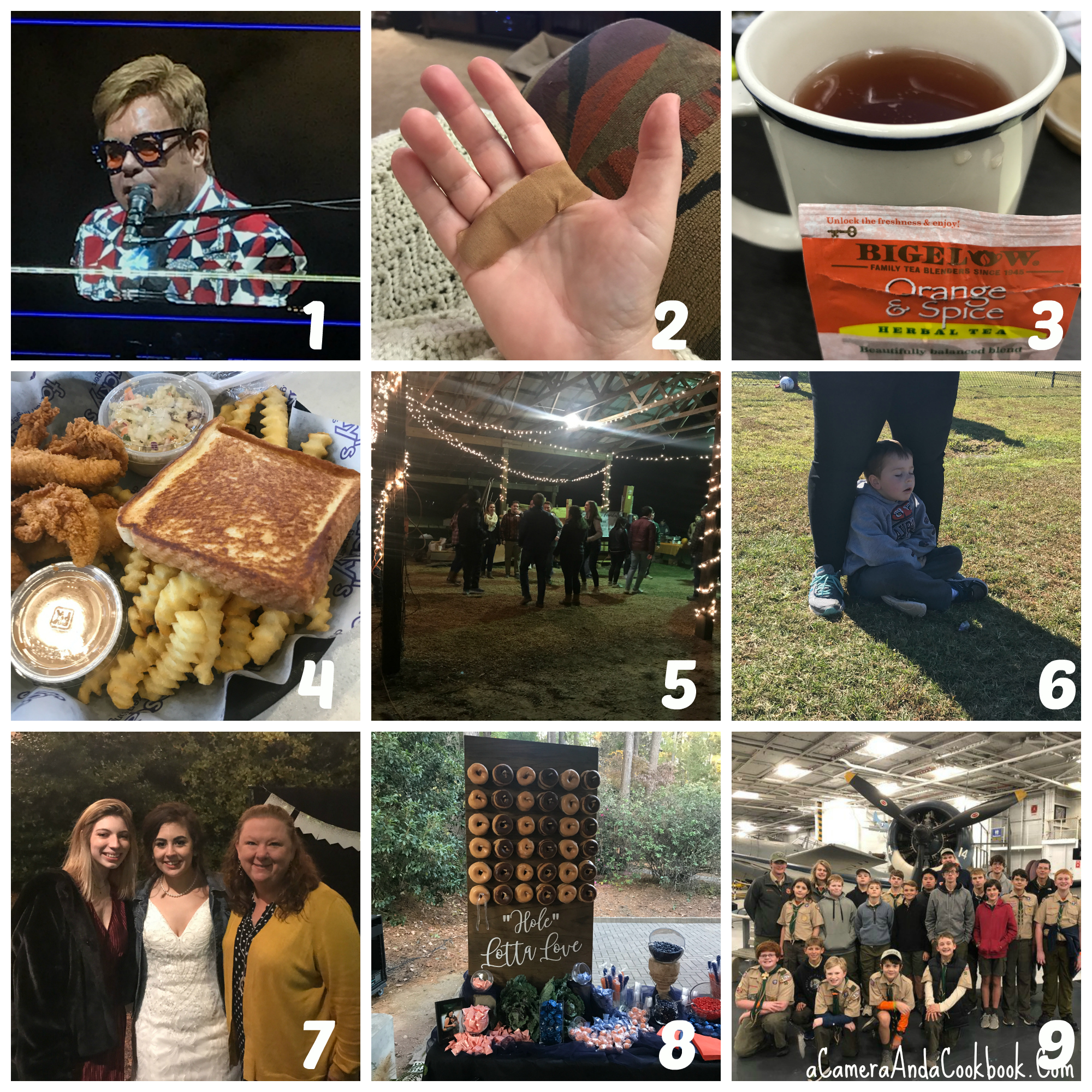 1: We started out the month with a quick trip to Atlanta to see Elton John in his Farewell tour. That weekend was his last time to perform in Atlanta before he retires in the next year or 2. Rob is such a big Elton fan and is sad that he won’t be touring anymore, but understands that he is 72 years old and wants to spend time with his family. It was such a great concert with all his greatest hits and a few lesser known songs. That man played for 3 straight hours and Ray Cooper (percussionist) played him, which is always a huge treat.

2: Last Monday I went to the Orthopedic Dr. because my right middle finger gets stuck when I make a fist and it pops and locks causing so much pain down into my hand. My regular doctor referred me to Dr. H who said the first step in treating a “trigger finger” is to in inject a steroid and numbing agent into your hand just below that finger. So that’s what he did. He said the numbing agent would take up to 24 hours to wear off. It was terrible having a numb and tingling finger, like when you fall your arm falls asleep when you lay on it too long and it tingles to the point it hurts. That was the pain I had in my finger.

So it’s been a week since the injection and he said to give it 3-4 weeks for the steroid to fully work. I feel like it’s not locking or popping as hard as it was before, so here’s hoping I don’t have to have another shot. At least not for a really long time.

3: Got some new tea; the variety pack by Bigelow. The orange and Spice was pretty good.

4: My friend, Rebecca, and I met up for lunch and we went to Foosackly’s, which is a new chicken finger place here in town. Pretty darn good!

5: Friday night, we went to the Wesley College Group’s Fall Festival to help serve. This is a picture of them in the barn Square Dancing!

6: Saturday we went to my nephew’s soccer game. Here’s another nephew who fell asleep between his mama’s legs. He wasn’t feeling so great.

8: At Elizabeth’s wedding reception, the donut board caught our eye very quickly! Loved it!

9: Saturday morning, Alex got up and headed off to a Boy Scout trip with the scouts to Charleston, SC to sleep on the aircraft carrier, Yorktown. This is a picture of the boys. Alex is just to the right of the nose of the plain in the grey sweatshirt.

GOINGS ON
This last week Drew registered for the Spring Semester. Since he’s in his senior year, there’s been much thought about what he will do after he graduates. Lots of discussions about future plans as he will probably stick close by while his girlfriend, Caitlyn, finishes up Grad School. As of now, he hopes to find a job within driving distance and live at home while he tries to pay off school loans and save up.

I have been listening to some podcasts lately:
Bad Batch
The Mysterious Mr. Epstein – just started this one.

THOUGHTS
Lately I’ve been thinking about Aniah Blanchard and her family. You may have seen the story on the news. Aniah is a 19 year old who lives in Auburn and goes to the junior college here. She’s been missing for a couple of weeks now. They arrested someone this last week in connection with the case, but still no answers as to where she is. My heart just absolutely aches for her family as they suffer through this time of waiting. Please pray for them. I still have hope that she will be found alive.