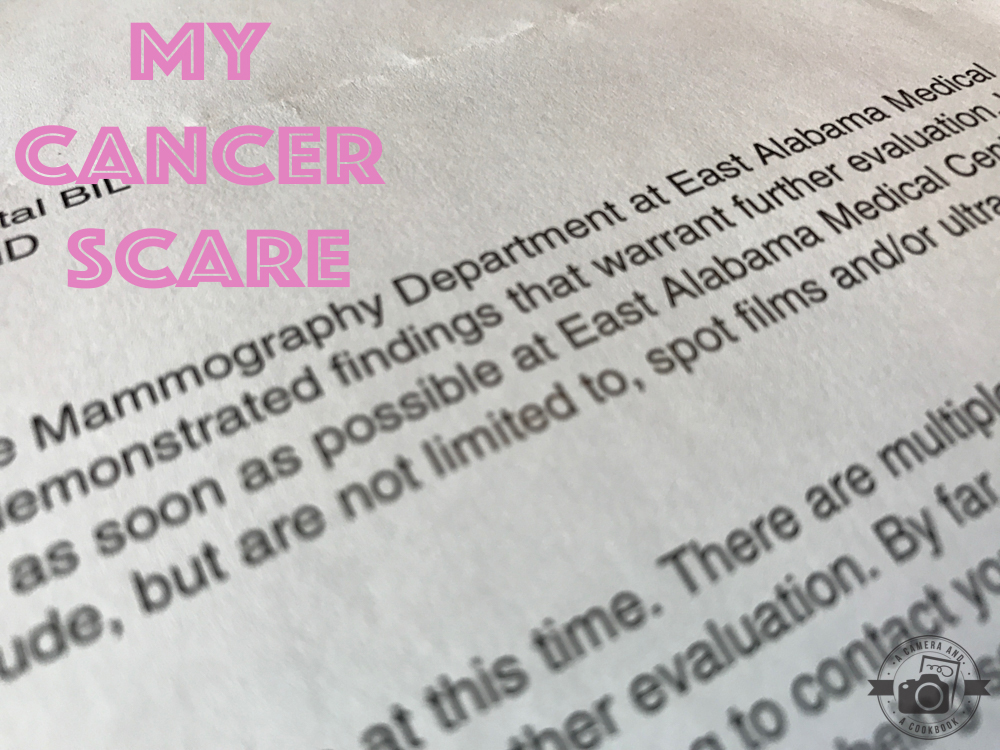 So it doesn’t matter how many times doctors and nurses tell you something. Anytime the C word [Cancer] is involved it scares the absolute life out of you. I went for my annual Gynecology appointment back in September. The doc and I discussed my upcoming mammogram which was scheduled for mid October. Since it was going to be my first one, he warned me that often times they will call you back in for more tests for varying reasons. One reason is pre-menopausal women have dense breast tissue which makes it hard to see clearly. Another reason is that they don’t have anything to compare it to.

A couple weeks ago I showed up for mammogram and the lab tech was really nice, but still managed to push, pull, and squish my ta-tas like I never imagined possible. Luckily, I have a high tolerance for pain. I didn’t complain. It went by quickly and then I was able to head back to work. Rob left out around lunch to fly to San Antonio for the week.

Not 24 hours later, I got a call on my cell. However, I was at handbells and didn’t answer it. In between tunes, I googled the number and to my horror this is what I saw: 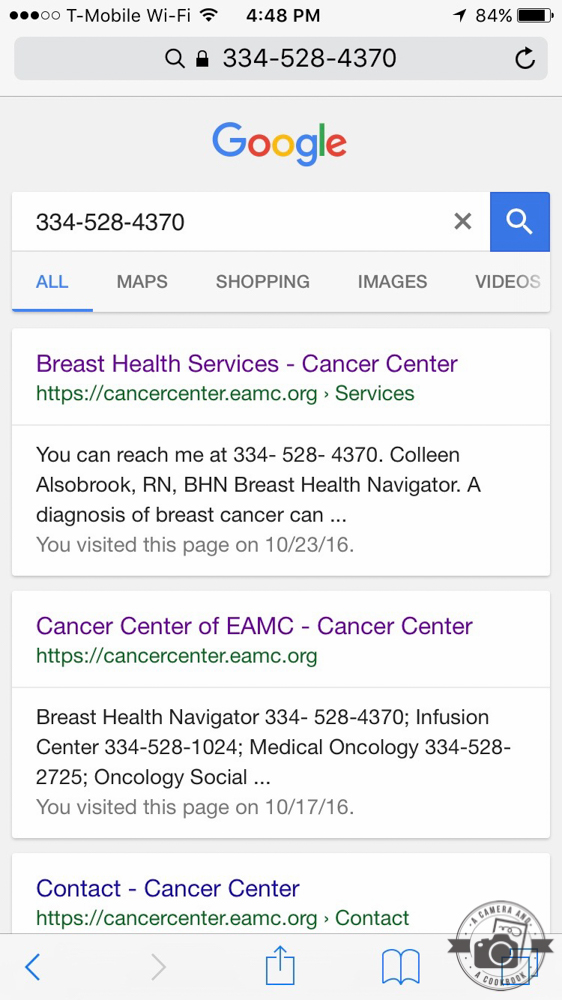 At first glance the words Breast and the word Cancer jumped out and waved at me. Ok, not really but they were the ones my eyes gravitated to first. That’s not really at all what I wanted to see, but my paranoid self kind of expected it. I was just hoping against all hope that it wasn’t what would show up.

I clicked on the top link and saw this: 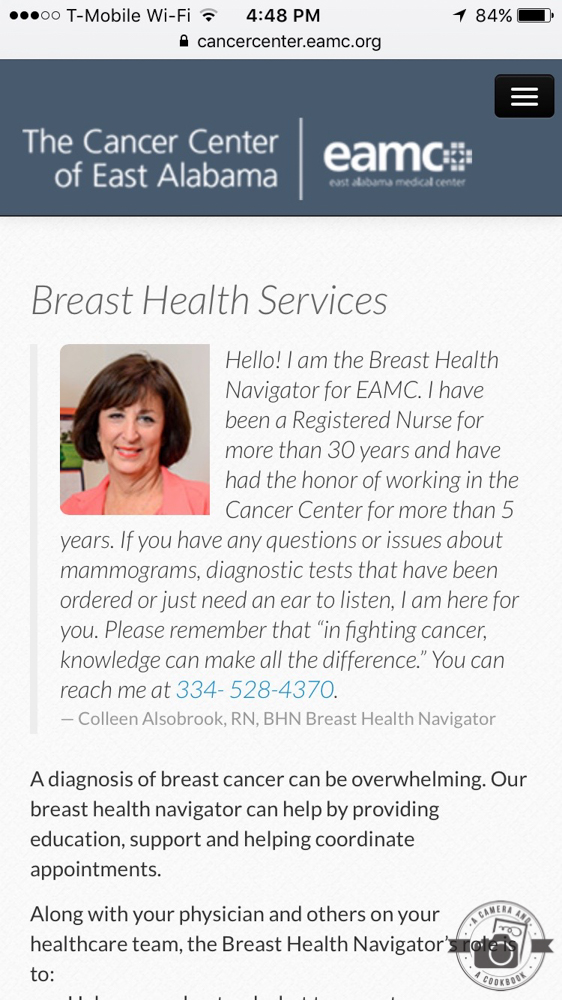 Of course I ignored the intro part and went straight down to the meat of the pages that says: “A diagnosis of breast cancer can be overwhelming.” Fear poured through my body and my muscles became weak. I wanted to leave immediately to go call them back, but we already didn’t have enough people at bells. I just stuck it out and then called home on my way to the car. I called home because I thought they may have a called my home number and left a message. To my surprise, Drew was home in between classes so I had him look for me. They hadn’t left a message, so I decided to wait till after 1:00 to call since that’s usually when people are gone for lunch.

I finally got a hold of them and the lady quite vaguely said that the doctors wanted to look more closely at my left side. She then transferred me to the scheduling desk, where I made my appoint for the following Tuesday. For those that know me well know that I do not like the unknown. I am not good at waiting. My brain shifts into high gear, because I want to be well educated and I want to know options beforehand. It doesn’t matter how many time nurses, doctors, friends, and family tell me that it’s just precautionary. That it is nothing to worry about. That week of waiting during times when I wasn’t busy, my mind would go THERE and I would start thinking…
…chemo
…mastectomy
…hair loss
…radiation
…missing work
…insurance…what would it cover and not cover
…being so sick and all of the side effects
…early death
The shear pain that shot through my core all the way to my soul when I had these reoccurring thoughts was enough to make me sick to my stomach. I would tell myself how ridiculous this was that I was thinking too much about this, but its how my brain works. It is who I am. The more I thought about not worrying, the more I would worry.

Last Tuesday when I went for my 2nd set of tests, I was so aggravated because I had called back the day before to try to figure out if Rob should come with me. The lady was still very vague, but did tell me that I would know something one way or another before I left. Its aggravating when you show up to the hospital and you know your there for more tests, but you don’t know exactly what kind.

Well, they ended up doing more mammogram X-rays just on my left side. The tech took 8 different pictures. I am thankful that she was so friendly and talked to me while she was doing it so it wasn’t as awkward and helped keep my mind off of what was going on and why I was there. Then, she went into another room to have the doc look. She had warned me that the doc on call liked doing ultrasounds if the X-rays aren’t 100% clear. A few minutes later she reappeared and told me to come on to the ultrasound room. I laid down and another lady proceeded to look using an ultrasound wand. She sent me into absolute panic when she asked if I was experiencing discharge from that side. My answer was no. She kept looking in one spot. I just laid there picturing myself with out hair, hooked up to tubes to get chemo. I pictured days of being hunched over the toilet. Yes, my mind went into overdrive while she took more pictures. She finally finished and said she’d be right back so the doc could look.

A few minutes later she came back in and said everything was fine. Everything was OK!! What was showing up was an abnormal duct. I wanted to jump up and down and hug her. I couldn’t wait to out into the waiting room to see Rob and to tell him that everything was ok.

I can’t tell you how the weight of the world was lifted off my shoulders. In that week, my view of life changed. I’m finding that I am more appreciative of things. I see things a little differently and when I hear of folks being diagnosed with cancer, I’m a little closer to understanding what they are going through.