Last night the boys’ Scout Troop held their end of the school year court of honor. Many merit badges nad rank advancements were handed out, as well as the swearing in of new leadership. The final presentation of the evening was the troop’s inaugural presentation of the James J. Baird Jr. Honor Scout Award, which was awarded to Drew! This is an award that will be given out every year at the spring court of honor to the troop’s “top Scout” based on participation in troop activities, demonstration of Scout skills, continuing advancement success, and a vote of his peers. The namesake of this award Jim Baird is the uncle of the Scoutmaster Andrew Baird. 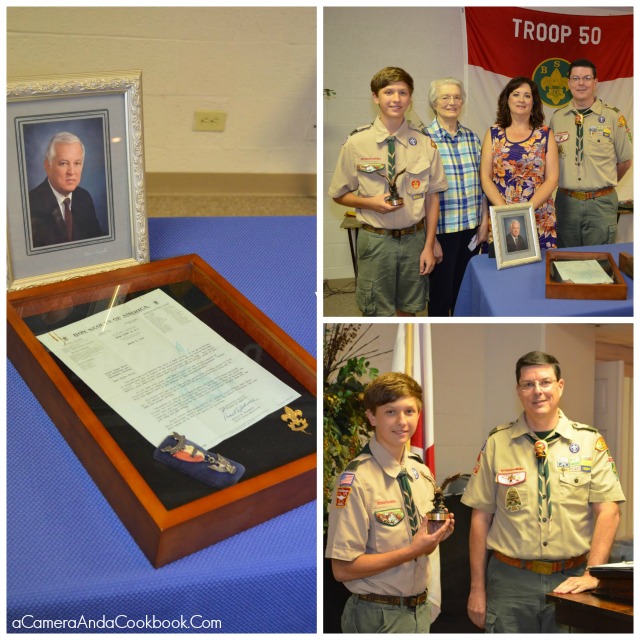 Needless to say, I’m quite proud of Drew and his leadership and service to his troop and community. I’m also super excited that he will be completing his Eagle Project this summer!

Jim Baird was a 1945 Eagle Scout and member of Troop 88 from Bessemer, AL, who passed away in 2011. He was a 1954 Alabama Polytechnic Institute (now known as Auburn University). Other Baird’s ties to Troop 50 include membership in the Auburn Rotary Club (the troop’s chartered organization) as a Paul Harris Fellow and service as its 2002-03 club president. James Baird was an elder of First Presbyterian Church (the troop’s meeting location), which honored him by naming Baird Hall in recognition of his management of the church’s facilities and several building projects.