Yes, there was a time when my teenage son did not procrastinate. School started and some of my friends who have kids in high school, reminded me that homecoming this year is early. They mentioned that they were urging their sons to figure out who they were going to ask and go ahead and git er done (as we say in the South.)

I took heed and talked to Drew that homecoming was just a couple weeks away. I reminded him that last year he waited till the last minute. The girl he asked said yes, but then realized she had a soccer tourney out of town that weekend, so she couldn’t go. That left him with no time to find someone else to ask, and he ended up not going.

Drew texted me one day asking me to get a poster board. My first thought is that he has a project for school. Well, in this case his project was asking a girl to homecoming. He had figured out who he wanted to take and even had it all planned out. If you don’t have teenagers, you may not realize that it’s not like back when we were in high school, where the boy would just walk up to a girl and say, “Hey, you wanna go with me to homecoming?” No, now there has to be a production made out of it. Poster boards, roses, bouquets of flowers, MP3 players, and more are many times involved when asking a girl to homecoming or prom or whatever the occasion.

He wanted to ask her on Friday right before school go out. Thursday night he was going to be out kind of late, because of a band function. He ended up getting home about 10pm. He wanted my help making the poster. He wanted to poster to say, “Don’t you think it makes “cents” for us to go to homecoming together?” We traced the letters with pencil and then with permanent marker and then hot glued the pennies on the poster. The next day I took a late lunch, so I could go get the rose and drop it off in his car. I was concerned that it would wilt if it stayed in there all day with it being in the 90’s.

It all worked out as planned and she said yes! I look forward to taking pictures of them and hearing all about Drew’s first homecoming dance. 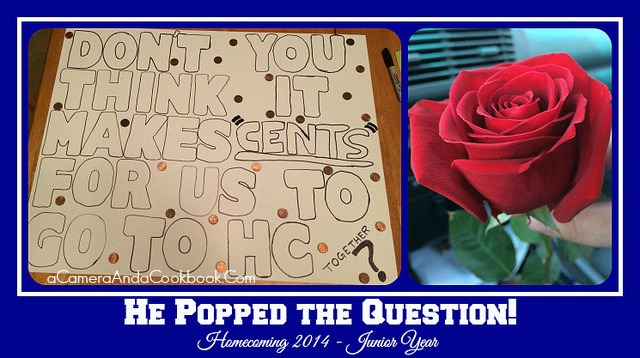