Last Monday, I was about to leave work and head home. I got a voicemail and some texts from Drew saying that his stomach was hurting. He had talked to several friends at school and googled it. He was sure he had appendicitis. I called his pediatrician. He called me back on my drive home, but based on the symptoms I told him, he didn’t think it was that. However, I left out some important details, because I had just forgotten about Saturday night and the fact that Drew was feeling feverish, nauseous, and hungry.

I got home and told Drew about my chat with Dr. T, he said he didn’t want to wait to go the 8:15am appointment the next day. I had already submitted online paperwork for urgent care office, so off we went. Saw the dr. He looked at Drew and told him he’d be having surgery in just a few hours. We waited on paperwork and off we went.

Since it was after hours, we had to go to the ER. We did the paperwork, then sat for about hour. Got called back for him to drink a “yummy” lemonade concoction. He got it down in about 20 minutes. Rob showed up after the scout meeting. We waited another 40 minutes. Drew got called back to do the CAT scan. They put an IV in because they have to inject a dye that will react with the concoction that he drank. He came out from the scan and was quite cold, which is a normal reaction. They pulled a warm blanket out and draped it over himself. Waiting another 40 minutes and then, we found out that he indeed need to have his appendix removed. We went back to the ER and waiting for them to move a bed. A little later he got wheeled up to his room, which was in the pediatric care unit. 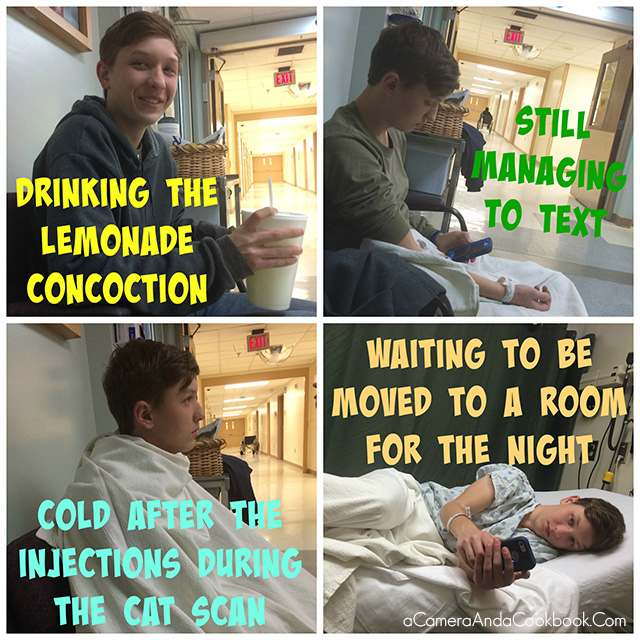 Since he wasn’t in a great deal of pain, we asked if he would mind us going home to sleep and then us coming back early the next morning. Drew was good with that, so after chatting with his nurse that was on duty for the night we got in the car and went home. We got home around midnight.

The next day we were up at 5:45 and off to the hospital. We expected to meet the surgeon as he did his rounds and find out when they would be able to fit Drew in. However, just a few minutes after we got there, the nurse came in and said that Drew was being taken down now for surgery. I was thankful to go ahead and get it done. He was wheeled down to pre-op, where we met the anesthesiologist, Dr. Bridges and finally met the surgeon, Dr. Lazenby. While we were standing with him in pre-op, they asked him and us all sorts of questions, prepped him for surgery (while we stood on the other side of the curtain), and then, injected some meds to make him drowsy. Not long after that, we went to the surgery waiting room. Rob and I were busy texting, facebooking, and calling people. Before we knew it the surgeon was there to let us know everything went great. Drew’s appendix was sitting up on top waiting to be pulled out. He was in and out of surgery in like 25 minutes. It was supposed to take 45 minutes. Rob and I went on up to Drew’s room to wait. They said he would be in recovery about an hour.

Our friend from church, Chris K. brought us a chick-fil-a biscuit and chatted with us. Before we knew it they were rolling Drew back into the room. It didn’t take him long for the anesthesia to lift. However, he was still a out of it, because he asked us the same question 3 or 4 times. Chris left not too long after Drew came in. The nurse brought him some powerade, jello, and crackers to start working on. He ate a little bit of that and then complained he was hurting some. We told the nurse and she brought him another narcodic. Needless to say he slept for a while after taking that.

When he woke up, our friend and the mom of one of Drew’s best friends was there, Mrs. Julia F. It was nice to have a few visitors. Drew’s girlfriend Caitlyn came by a while after that. Drew had some lunch, napped for awhile, walked up and down the hall. Did all the things they said he had to do before he could go home, so around 1:30 he was released. They even let him walk out instead of having to be wheeled out.

When we got home, he rested and ended up sleeping another good part of the day. Rob, Alex, and I moved furniture for the new carpet that was installed a few days later.

Overall Drew’s recovery has been remarkable. He even was able to go skiing this past Sunday, just 5 days after surgery. 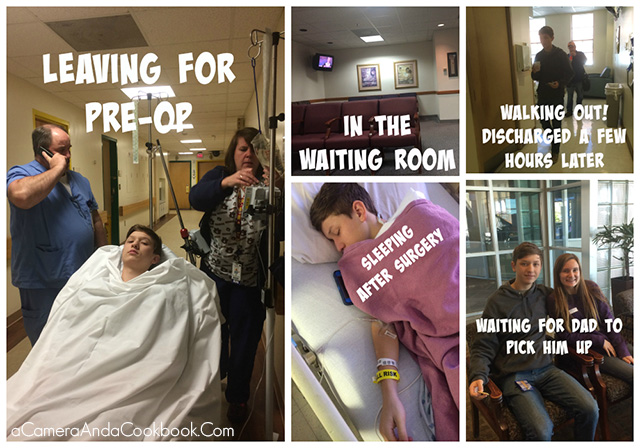 2 thoughts on “An unexpected event”